The Graafschap College in  Doetinchem opened a new branch on Sportpark Zuid (Sports park south). The architectural office cepezed and cepezedinterieur made the integral design for the modern school building for the 700 students of the education departments Sport & Movement and Security & Craftmanship. 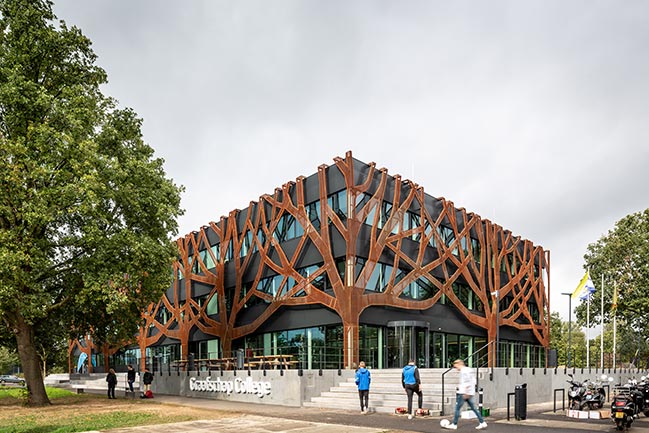 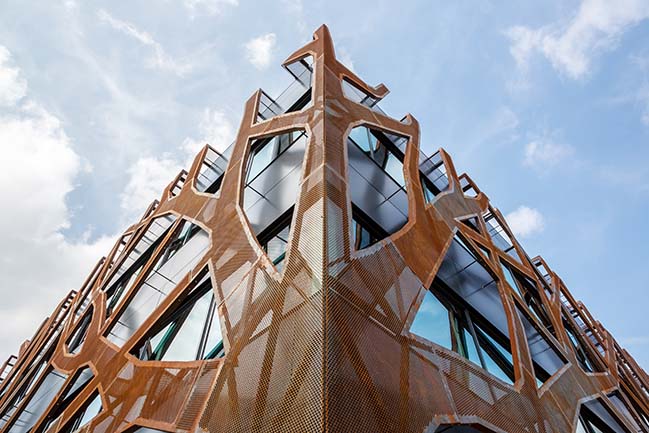 From the architect: Sportpark Zuid, where previously a tennis hall was located, is the ideal location for these studies, because they can make use of the sports fields and other facilities, such as a top-level sport hall. The new Graafschap College is one of the first school buildings in the Netherlands that doesn’t use gas. 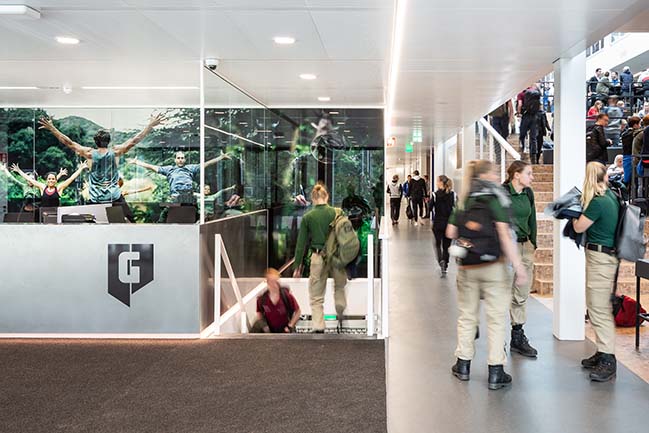 The school building is structured around a large central atrium, where the floor rises stepwise. With its many different seats, the atrium functions as a meeting place and canteen for the 700 students. Large strip windows in the roof of the atrium allow daylight to penetrate deep into the school. On every floor, the atrium is surrounded by a gallery with a balustrade of stainless steel mesh. The galleries provide access to the classrooms, which are situated on the outside walls. 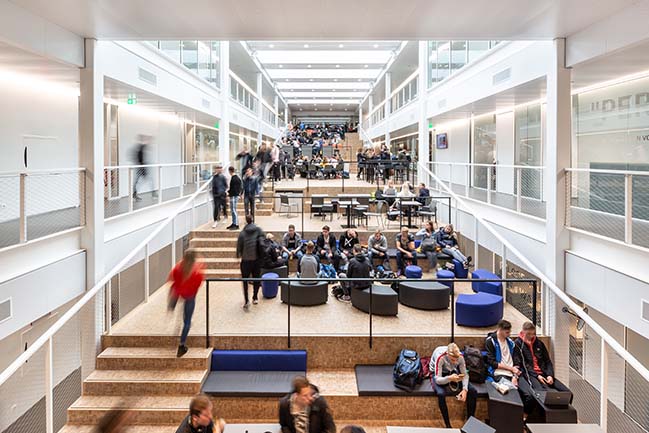 On the ground floor there are special functions such as the kitchen, the staff room and a number of interview rooms. Here two external tenants have also been accommodated, with their own entrance. In order to be able to look over the car park from the ground floor, and to give the building the appearance of a pavilion in green surroundings, the school has been elevated by a half-storey and placed on a basement. 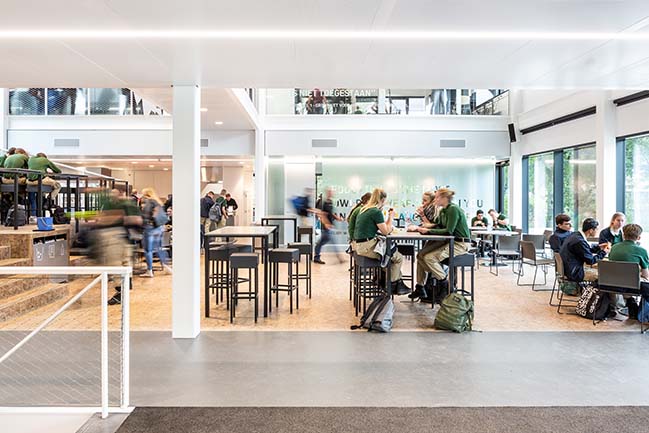 Beside the car park, the height difference is bridged by an elongated, landscaped staircase which also incorporates a ramp. On the eastern end elevation, the basement continues on into a raised schoolyard where the entrance is situated. The school has a lower ground floor running under half of the school with a basement where a naturally ventilated bicycle parking area and the changing rooms and lockers are located. 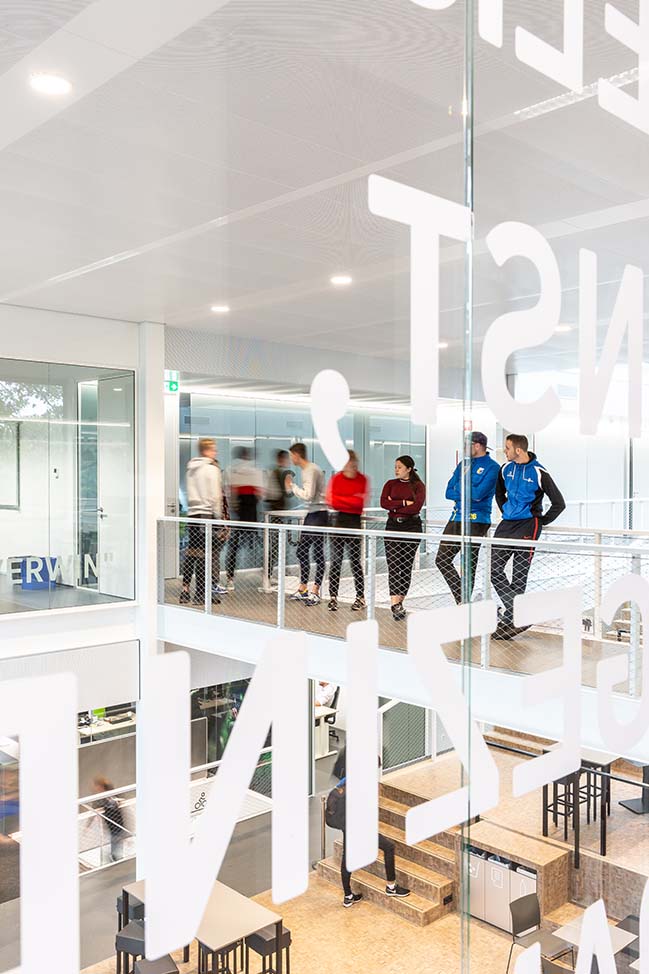 The façades are horizontally articulated, with alternating strips of glass and black aluminium panels. With the exception of the north side, a second skin of Corten steel has been placed in front of the façades, with a design that refers to the oak trees growing around the school. The Corten steel, which also functions as sun shading, is perforated so that there is sufficient sight from the inside looking out. 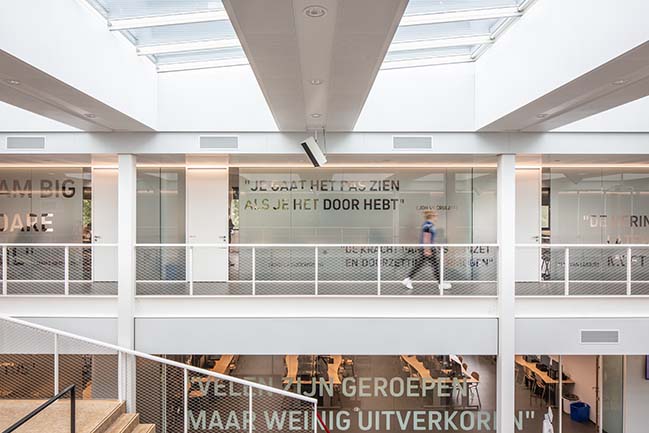 cepezedinterieur is responsible for the interior design. The identity of both courses of study is recognizable in the look and feel of the building, and is expressed in a harmonious combination of materials, textures and graphic elements. Related to Security & Professionalism, a course that prepares for working in the defence sector, a solid basis has been created with robust materials such as black rubber and end-grain wood for the floors. Accents have been added with, for example, prints and furniture fabrics in neon colours, this time related to Sport & Movement. 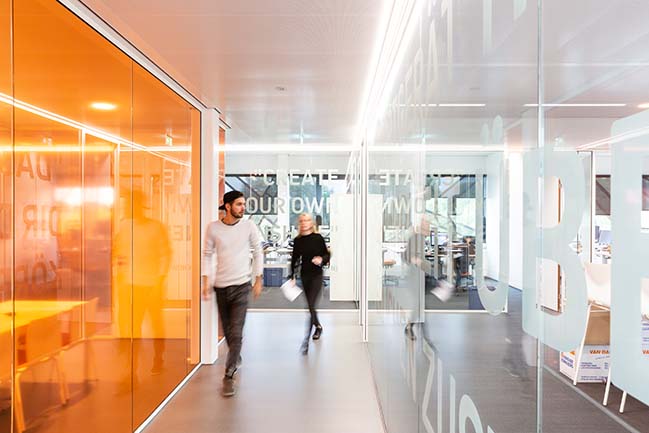 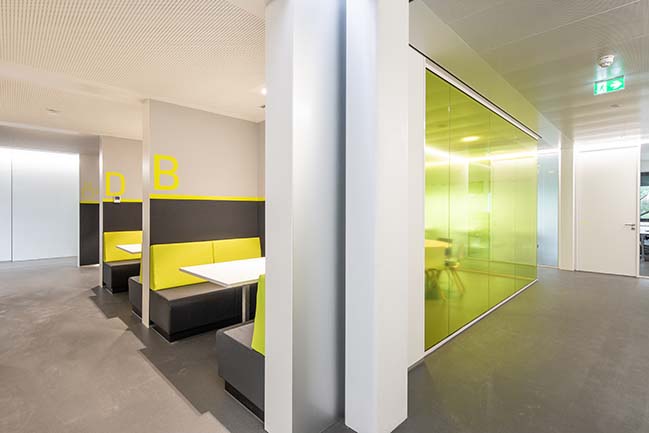 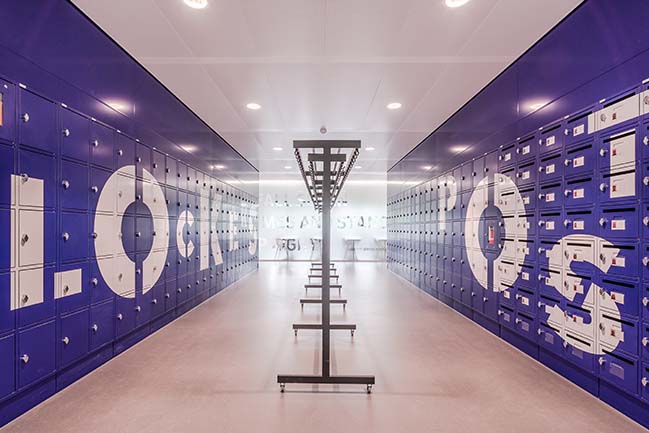 > YOU MAY ALSO LIKE: K.J. Somaiya College for Information Technology by sP+a 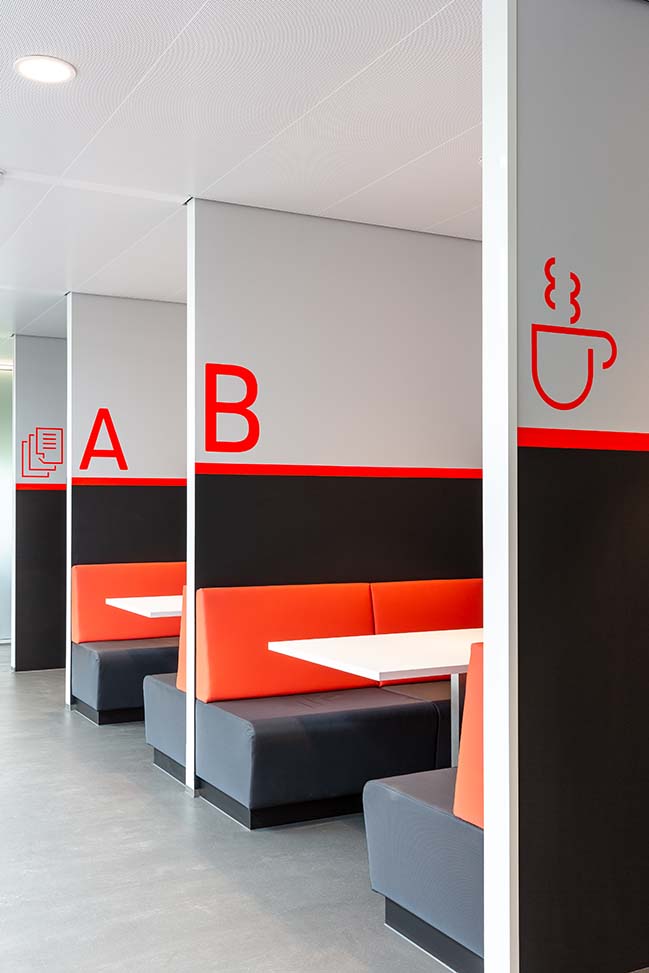 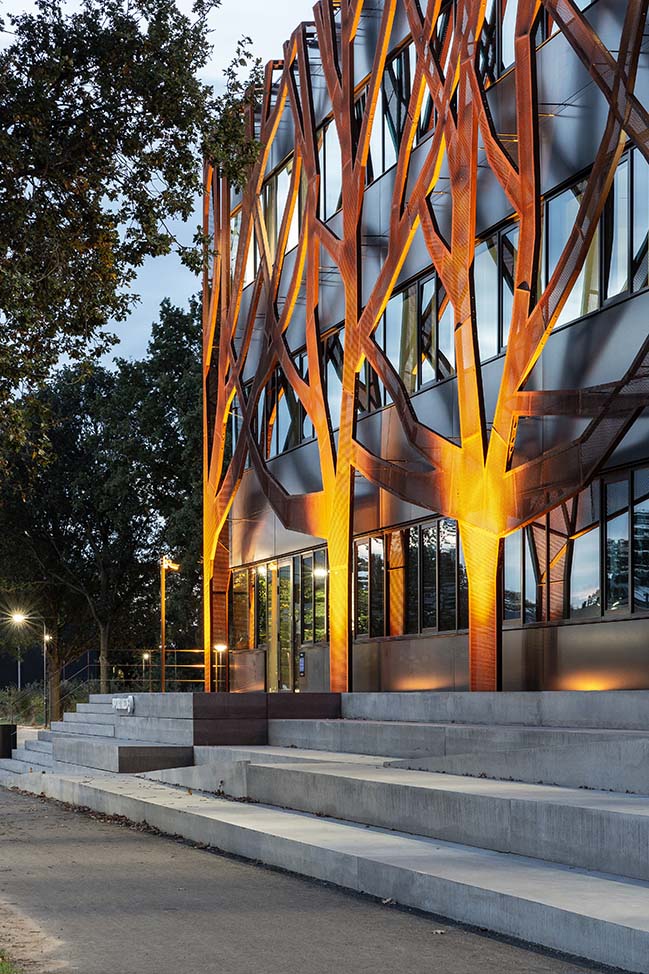 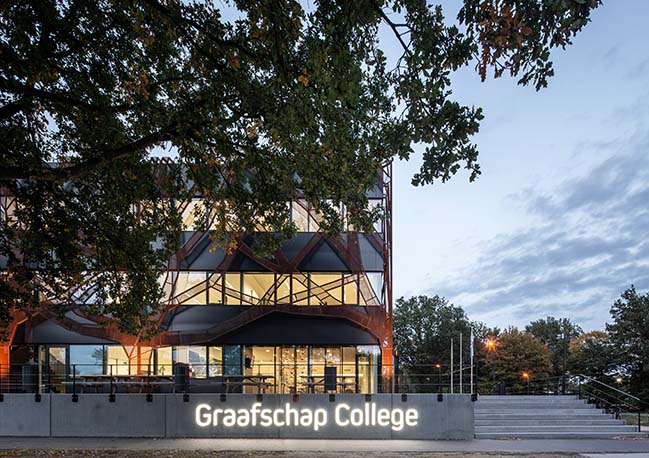 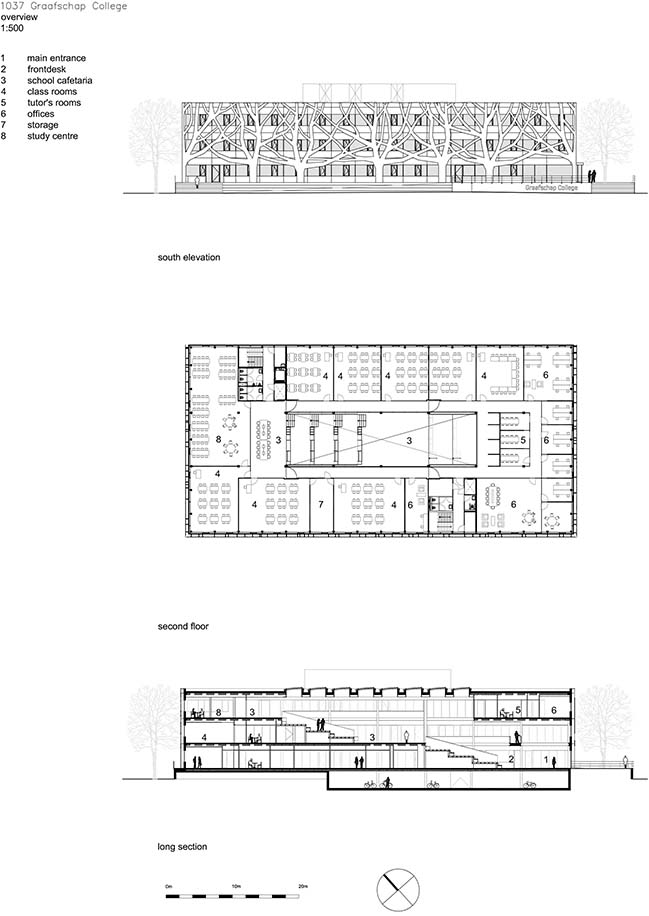 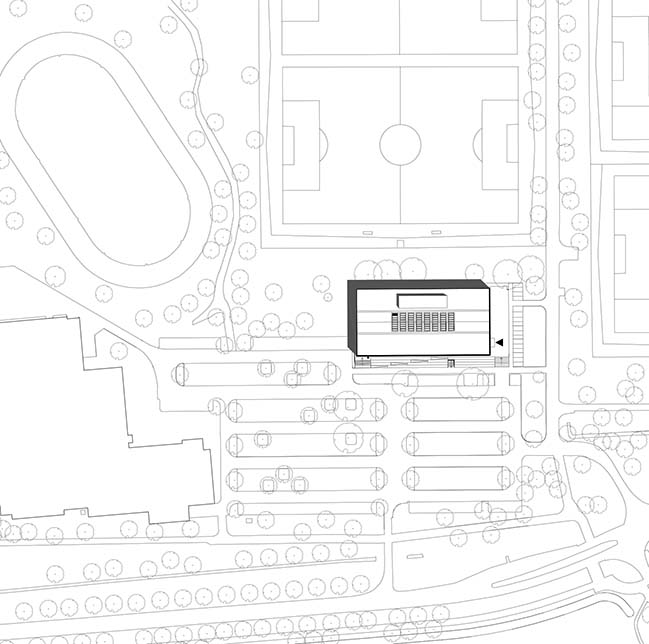 11 / 20 / 2018 The Graafschap College in Doetinchem opened a new branch on Sportpark Zuid (Sports park south). The architectural office cepezed and cepezedinterieur made the integral...