KAPKAR.SF-P7S is a temporary pavilion which was designed by Studio Frank Havermans to create a low budget pavilion to propgram discussions, forums, meetings, etc. in Nijmegen. 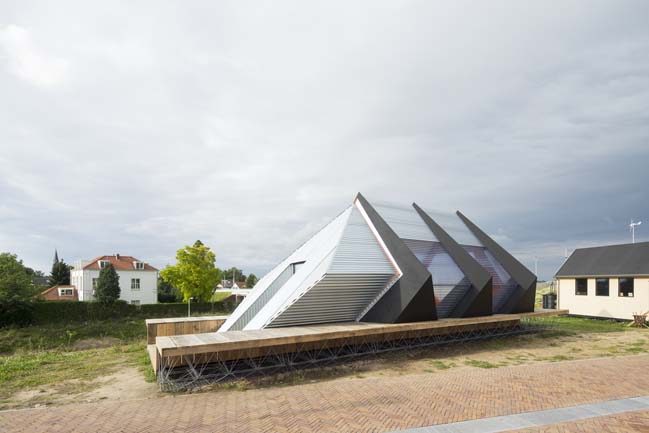 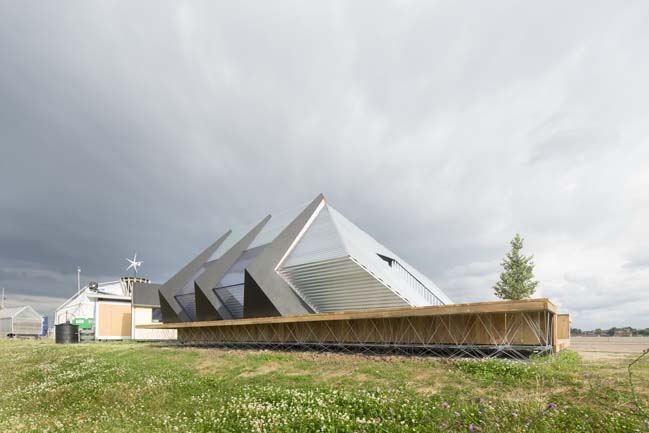 Project's description: This pavilion KAPKAR.SF-P7S is designed and built for a temporary Building Lab (BOUWLAB) organised by Stichting Fabrikaat. This foundation, based in the city of Nijmegen is specialized in organizing temporary place making projects. This summer they erected a small settlement along the new shaped river bank on the north side of the city to focus on alternative ways of building and living in a more self organized way and show it to a broader public. The client asked me to design a low budget pavilion meant to program discussions, forums, meetings, small scale exhibitions, lectures and other cultural events during the period of BOUWLAB. Specific wishes were that the pavilion should be demountable and transportable to their future location, project ‘GRID” in Nijmegen, that it would have a racy appearance, provide space for 50 people and that enough daylight would enter the building. Another wish was that I should collaborate with a MCT, a new company that developed a clever building system called KNØP. 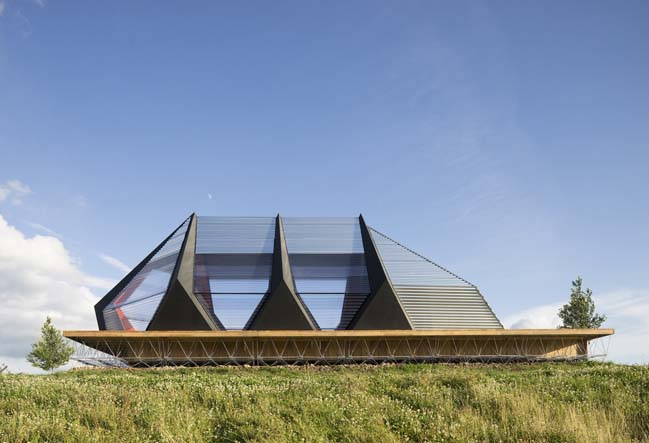 The site of BOUWLAB and the pavilion is on top of a new dike which has been thrown up for making a new river channel in Nijmegen in order to give the river ‘De Waal” more flow space if the water is high. For this massive infrastructural intervention, a part of the Nijmegen-North has been demolished amongst it also old farmhouses. 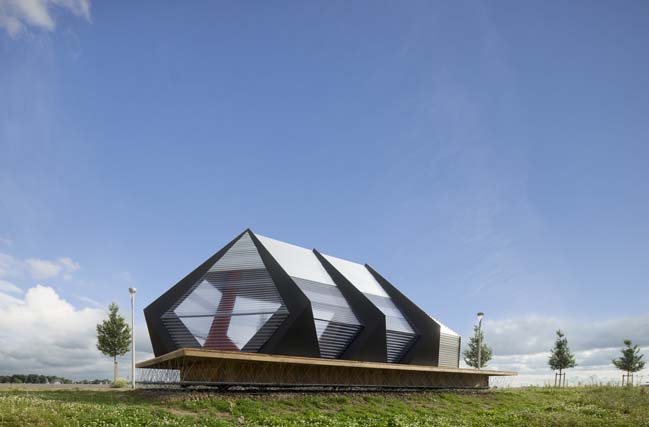 The first clue for the design of the pavilion is a classic truss frame construction that held up the typical broad gable roofs formerly used in old farmhouses and sheds. In this design I re-introduce this kind of constructions in contemporary design. With the difference that the supporting structure is not only visible inside the building, but that it is also visible from the outside to create more awareness. For me wood frame constructions are one of the anchor points of the Dutch agricultural landscape. Too easily they are destroyed. This design emphasizes on this constructions. I placed the construction of the building to the outside of the building, even so that it spatial becomes part of the roof and facades itself. In the interior the trusses are folded open and become interior spaces and places to sit for three people. 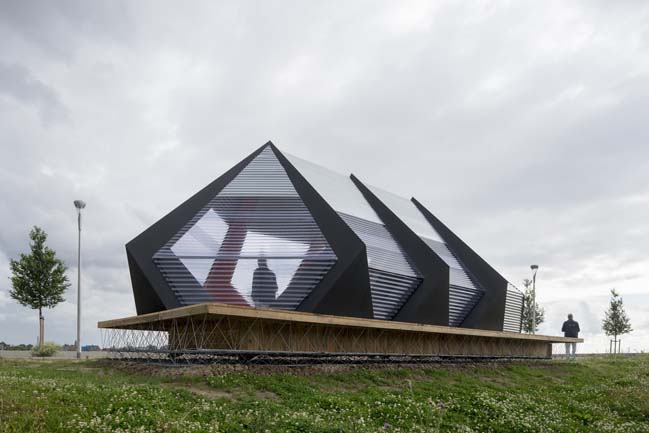 The main construction consists seven equal truss pillars, positioned parallel in three pairs. The seventh is turned 90 degrees and functions as a constructive ending. The base of the pavilion is a levelled floor on top the metal KNØP system. This system is not covered at the sides to emphasise in the beauty of this engineered construction method. The top of this base is covered with rough Douglas boards to provide a floor and side bench. The trusses are placed on the higher part. In the interior and outside this higher level is automatic used as benches by the public. The ‘head’ of the building is all made of steel angels and corrugated steel sheets and gives access to the interior. 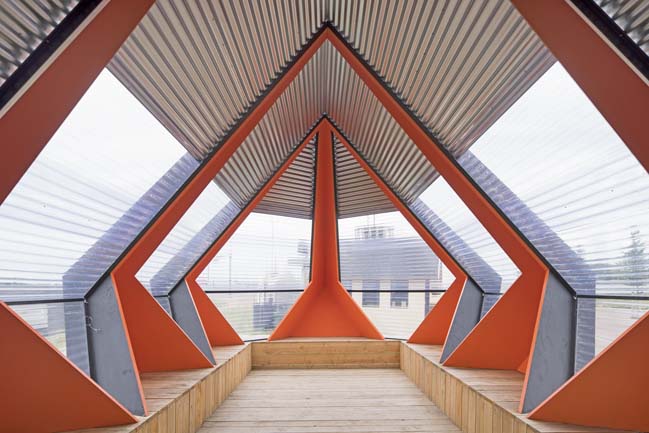 The whole construction is built in segments and can easily be taken apart en replaced. The roof and siding of the spaces between the trusses are made of metal and pvc corrugated sheets, a beautiful but simple and low budget material that slowly disappears from the landscape in the Netherlands. The pillars are treated with a new rubber coating. 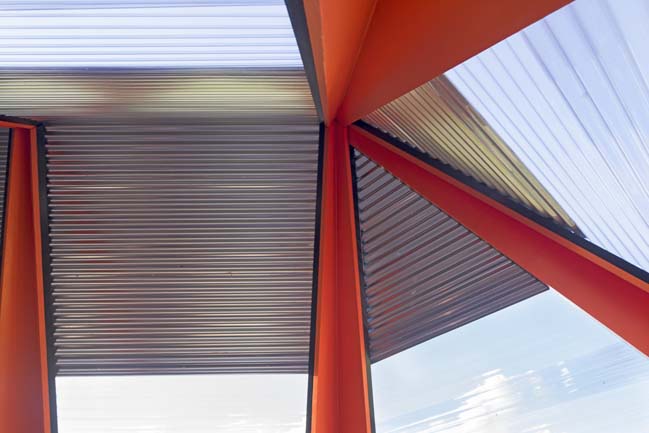 By charging this construction with several elements from classic farmhouse typology in combination with simple low budget materials I created an experimental hybrid construction that emphasize the importance of farmhouses and sheds in our cultural landscape and that these buildings can be a constant inspiration to design contemporary architecture. This pavilion at the same time is referring to the architectural heritage and also has a futuristic appearance in the landscape. 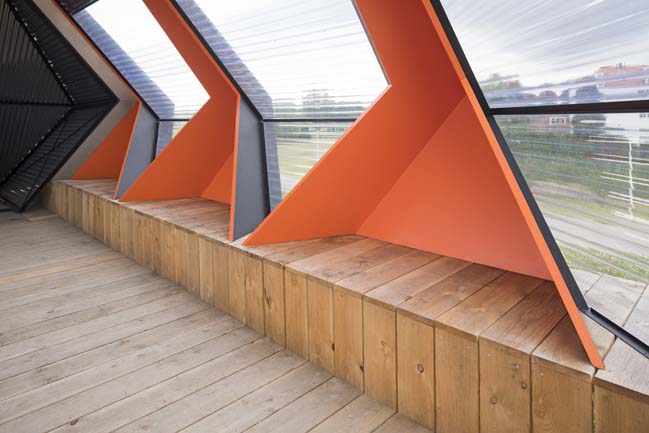 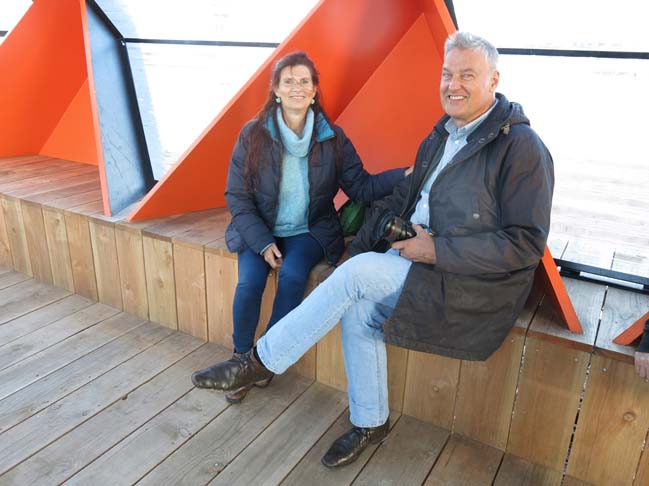 > Eye-catching facade for a building in Amsterdam by DUS Architects

09 / 20 / 2016 KAPKAR.SF-P7S is a temporary pavilion which was designed by Studio Frank Havermans to create a low budget pavilion to propgram discussions, forums, meetings...