The MVRDV's 75,000 sqm mixed-use building "Valley" has breaks ground in the Zuidas Business District. The project was created with the aim of realising a multifunctional building, which included a mixed programme of offices, residences and amenities. 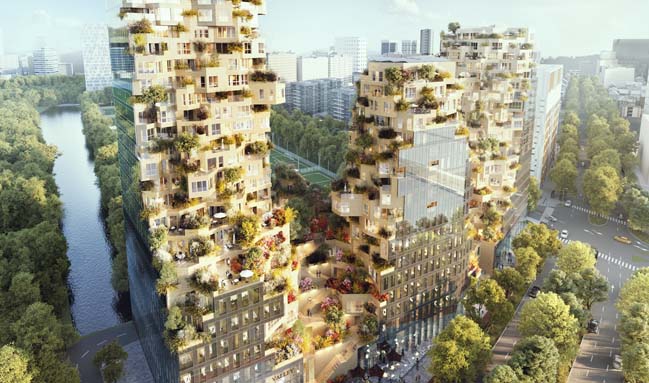 Project's description: In twenty years, the Zuidas area of Amsterdam has developed into the Netherlands main international business centre, which resulted in a reduced focus on residential interests. The development of Valley is part of the city’s ambition to correct this by transforming the area into a more liveable and complete urban quarter, welcoming large amounts of residents and additional public facilities to the area over the next decade.

Valley’s three peaks of varied heights reach up to a maximum of 100 meters at which the publicly accessible Sky-bar sits, spread out over the top two stories, offering panoramic views over Amsterdam. The building consists of 196 apartments, 7 stories of offices, a three-story underground parking with 375 parking spots and various retail and cultural facilities. From street level, a pedestrianised path, running along retails functions, terraces and roof gardens, leads up to the central valley-area spread across the 4th and 5th level and surrounds the central tower. Internationally renowned landscape architect Piet Oudolf designed all of Valley’s vegetation, focusing on a year-round green appearance. The project derives its name from the publicly accessible terraced valley that is spread out in-between its three mixed-use, towers. 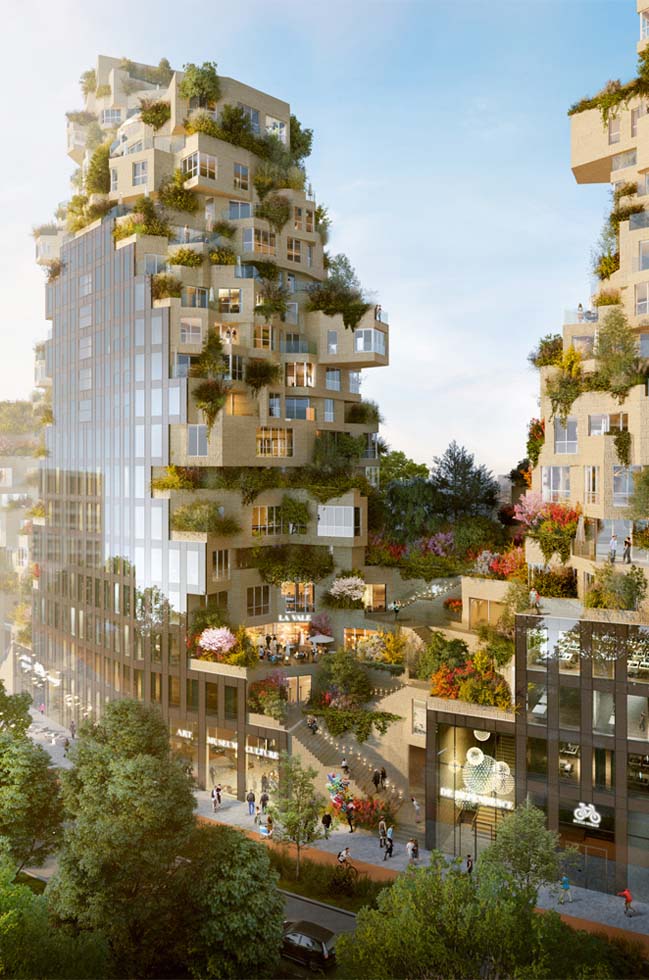 Valley’s location is defined by transition. It sits on the border between residential and commercial functions. It forms the connection between green sports fields and the dense urban setting of the business centre and it initiates the change from the smaller scaled buildings of the inner city to the large volumes that define the South-axis. The concept of the building is rooted in this idea of transition.

By placing the residential volumes on top of the multifunctional plinth and pushing them to the very edge of the envelope, the resulting volume reads as one single entity. In mirroring the corporate surroundings by way of its reflecting glass exterior façade, the design acknowledges its corporate heritage and visually connects to its immediate neighbours. In direct contrast to this, the inner façade is defined by a series of rugged, stone terraces with large planters, covering the building in vegetation and bringing a sense of human scale to the volume. Through this opposing treatment of the facades, the duality of the resulting volume, which is reminiscent of a carved out block, is expressed: The corporate vs the residential. The XL vs. the human scale.

“Valley combines residential apartments with a green environment that offers panoramic views of Amsterdam”, says Winy Maas, MVRDV co-founder. “A lively plinth offering a range of commercial activities has some offices above and is topped finally with residences. The carving out of the resulting block ensures that it becomes less introverted than existing buildings in the Zuidas. There will be many terraces, both private and public, filled with people, flowers, plants and outdoor seating.” 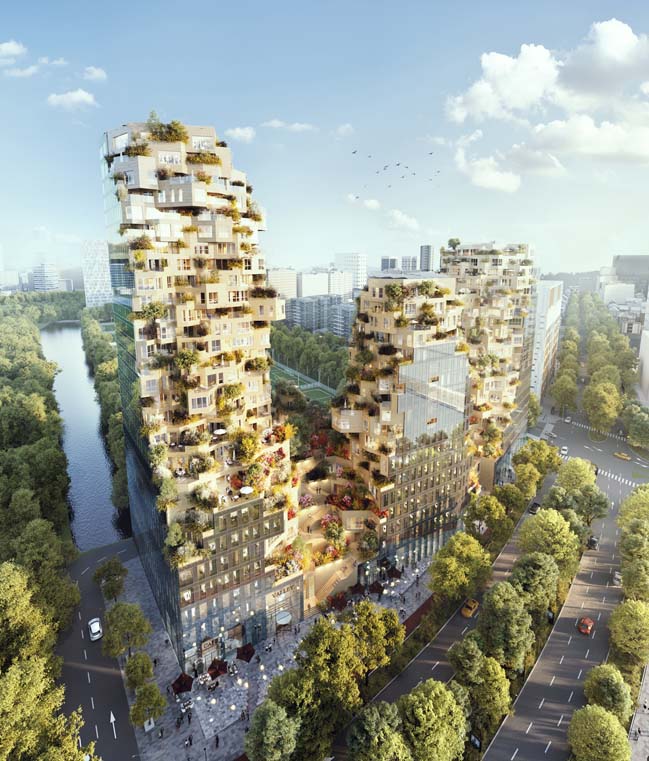 Publicly accessible from ground floor, through 2 large stairs, is the Grotto, a large interior space, fully clad in natural stone and lit by two great skylights that double as water filled ponds on the valley above. The Grotto serves as both a living room for the residents of Valley as well as a Grand Foyer for all other activities in the building, ensuring a lively atmosphere throughout the day.

MVRDV’s design for Valley emphasises the contrast between the corporate history and the more residential future of the Zuidas. Its offices boast high floor-to-ceiling windows, large, brightly lit floorplates and full-service amenities. The residential levels have large openable windows and sliding doors for outdoor spaces integrated within the stone facades. Outdoor ceilings and terraces are clad in natural stone as well, as are the fixed, automatically hydrated planters of varying heights that facilitate Valley’s distinct green appearance. Full glass railings protect residents against wind and sound without impeding on their panoramic views.

The jagged, natural stone façade is defined by using a parametric tool developed in collaboration with Arup Amsterdam. This allowed for much needed real-time control over quantities of daylight and sunlight, over structural limitations and required privacy, amongst other things. The resulting overall variation of Valley’s building volume means that no two apartments are alike, creating a wide variety of housing types with unique plans for its inhabitants. 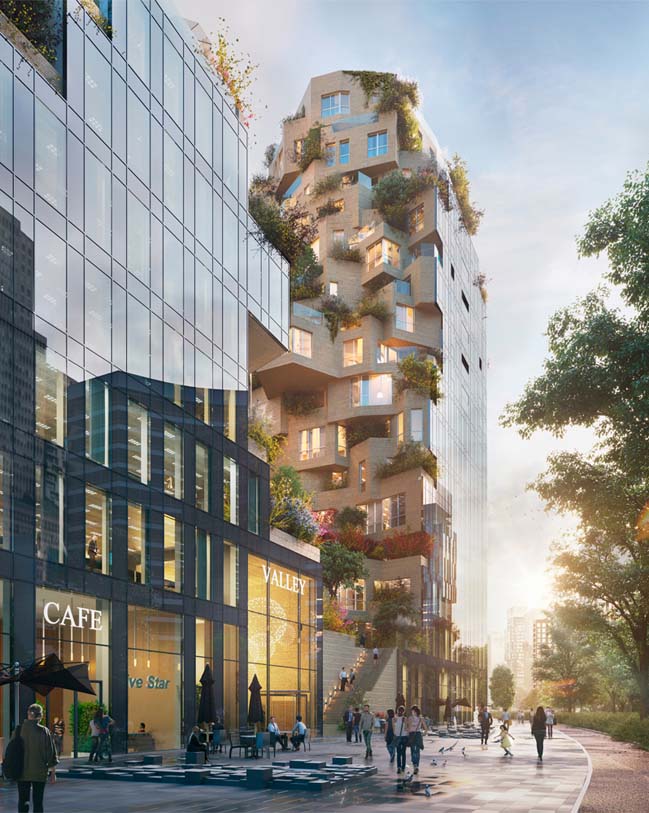 The abundance of outdoor spaces and communal green area’s promotes health and well-being whilst at the same time, contributes to the buildings green ambitions. In addition to a -0.3 EPC rating and a GPR score of 8, Valley will aim for a BREEAM-NL Excellent rating.

MVRDV worked together with Deltavormgroep & Piet Oudolf on landscape design, Van Rossum for structural engineering, Deerns for Installations (HVAC), DGMR on building physics and energy efficiency strategy and INBO for construction engineering. The investor is the RJB Group of Companies and contractors, G&S Bouw and Boele & van Eesteren. Completion is set for summer 2021.