NOVERCA is a project of a multisensory space for the students of Maria Veleda School, in Portugal, and is the result of a process begun about five years ago together with the direction of the school. They wanted to create an autonomous space for multiple handicapped students and there was a lack of resources and founds to actually realize it. 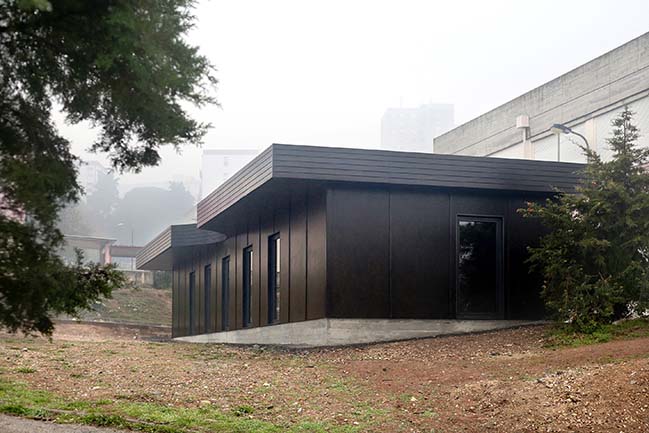 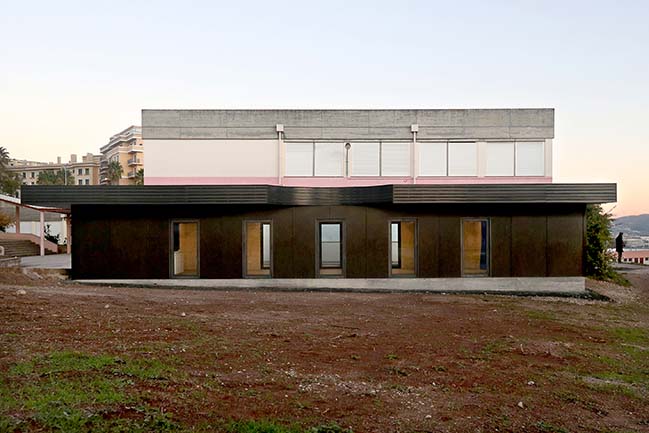 From the architect: A few years earlier the government had made the decision to integrate all multiple handicapped students in schools without ever creating the necessary conditions for them to have an autonomous teaching space and adapted to their limitations. Ideally these students would have two or three subjects together with the others, and in the rest of the time they would have individual accompaniment in their own space with sensorial equipment. It may be relevant to point out that among all the schools in the country it is extremely rare to have this kind of spaces that certainly facilitate the integration of these students. 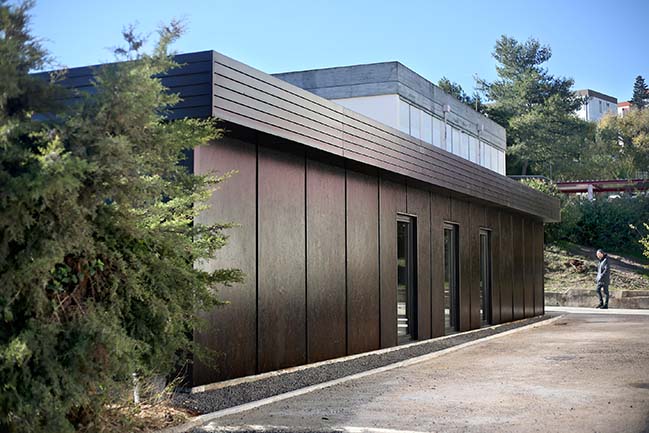 We have decided to actively collaborate in this initiative and we had the chance to work together with the professors, the students, and their parents, as well as all the educational community from this region. It was decided to schedule a series of regular meetings in the school with the intention of develop a common project and incorporate the different opinions until we arrive to a final proposal with the lowest cost as possible according with the given conditions. 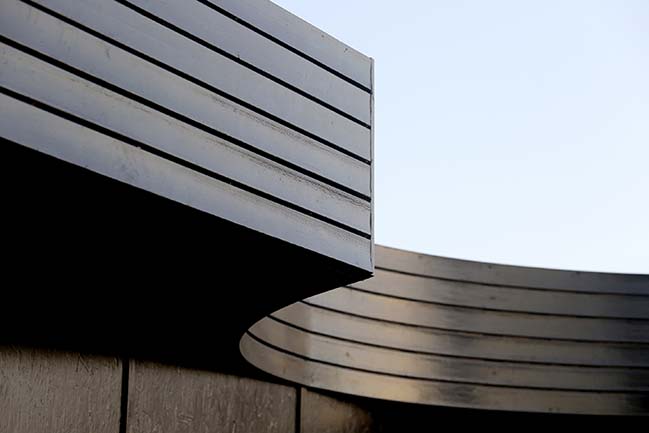 After a period of five years it was finally possible to guarantee a minimum funding for the project due to the various fundraising events and to the participation in architectural and educational competitions. This step was also possible thanks to the great collaboration of the company Jular which is specialized in wooden construction and has decided to work with us on a new prototype and construction system. Santomargo and Aresta Renovada also gave their great contribution on the works and all of them expressed the solidarity with the initiative. 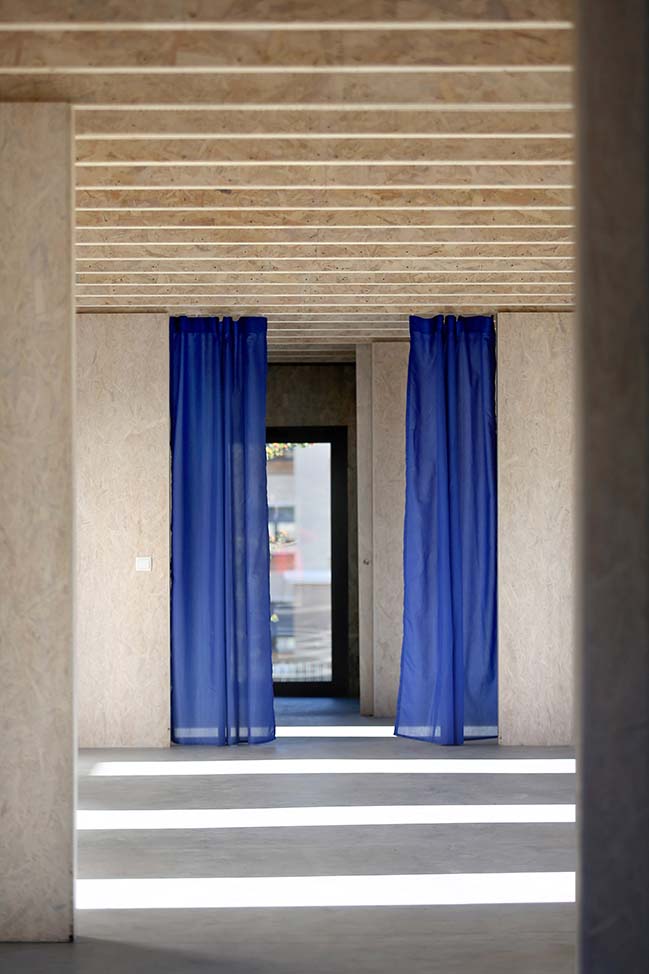 NOVERCA has approximately 90m2 and works as a small house for those children. It has a small kitchen to learn how to handle household issues, a main activity room, a small study room, a special sensorial space (the snoezelen room), and a bathroom. In architectural terms it consists on a reinforced concrete podium that establishes the horizontal plate on which the whole structure of wood stands. Here all the thin walls work as structural elements helping each other to create the overall unity. Than the roof is create by a set of very thin beams that generate a compact plane that lays all its weight on the top of the walls and stabilize them again. This means that all the elements (walls and roof) contribute to the structural function of the building ad there is no difference between spatial structure and physical structure. Paradoxically, there is only pillar in the whole project that rises up unexpectedly, solitary and massive. It has a raw finishing from the reinforced concrete and runs away from the orthogonality of the space. Although it’s higher than the walls it’s actually lower than the roof and expresses its own condition of being a symbolic element with a strong phenomenological character for the children. 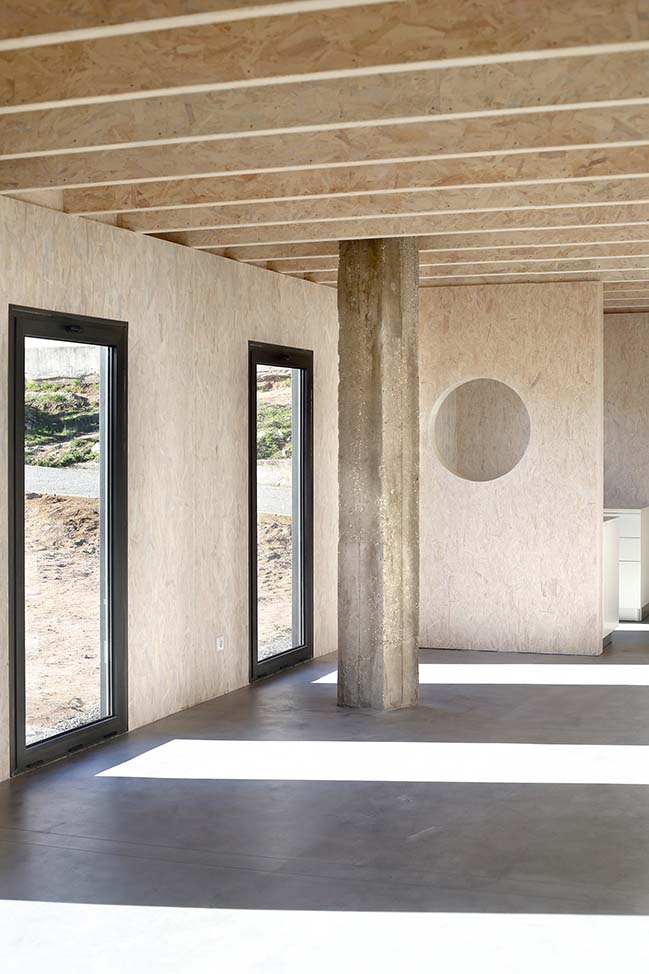 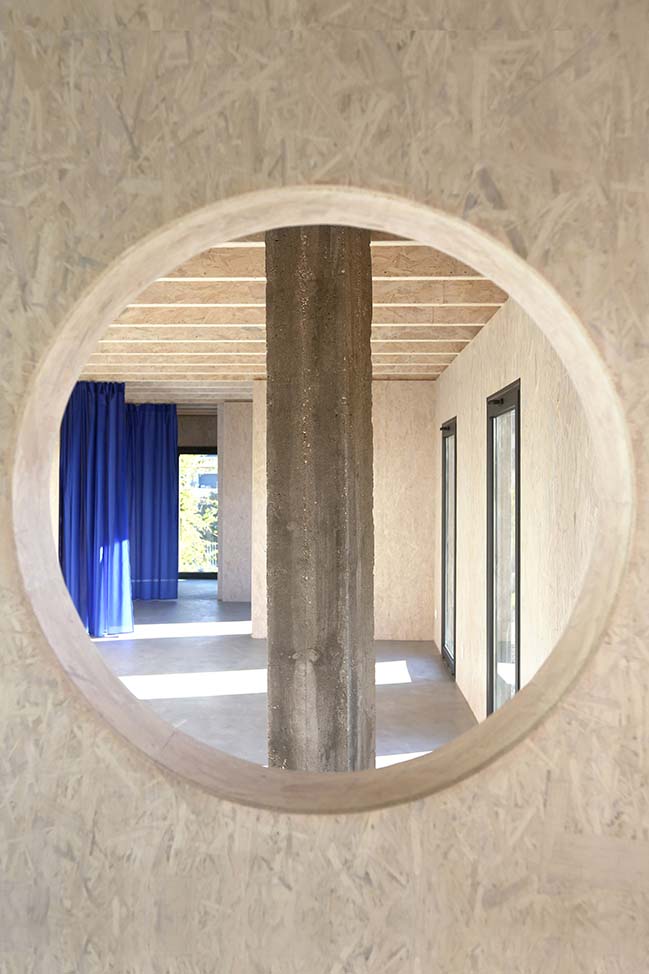 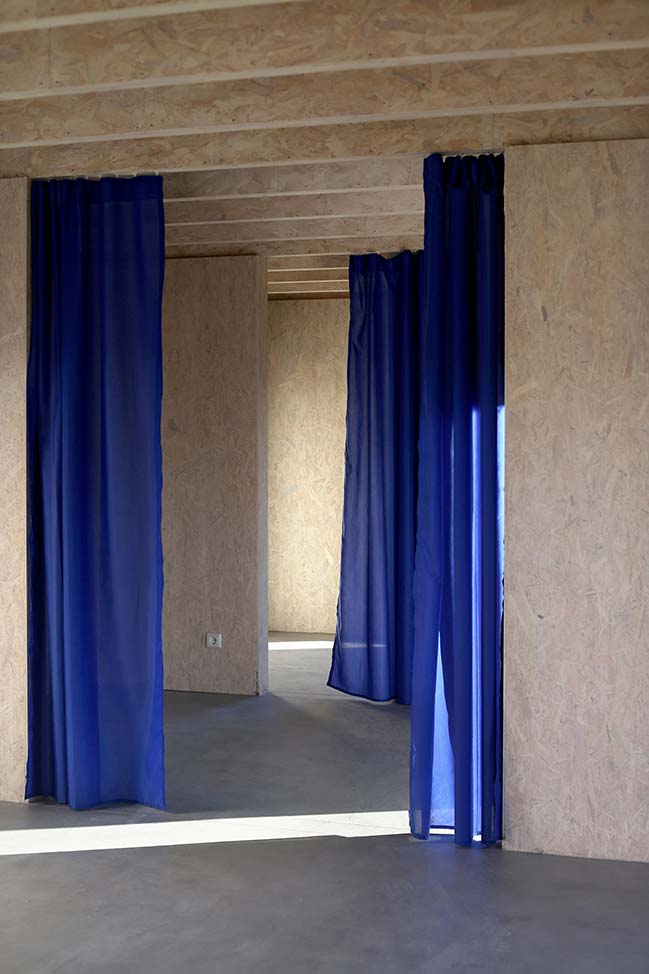 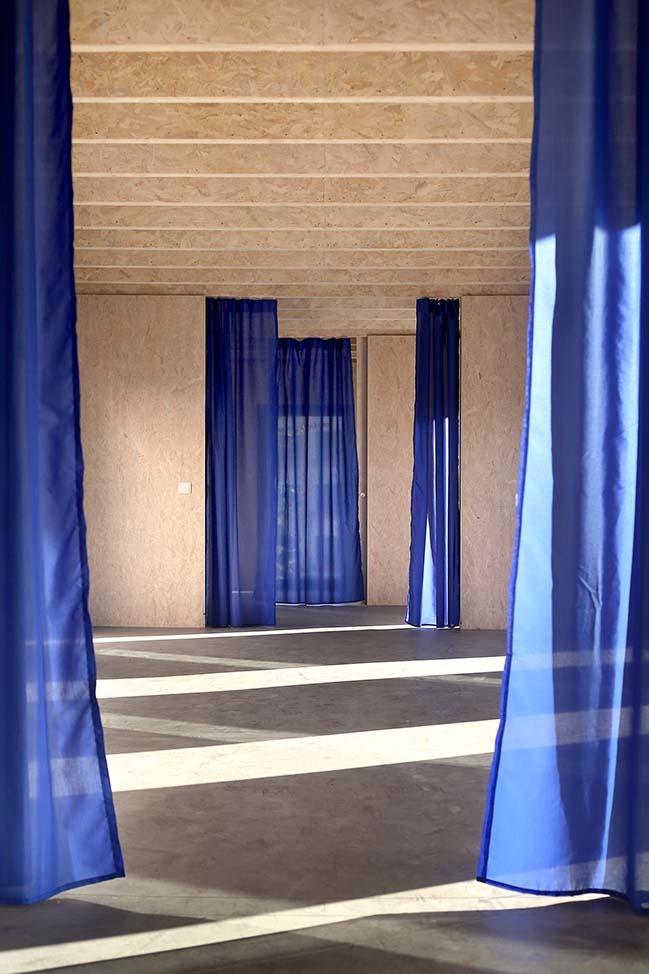 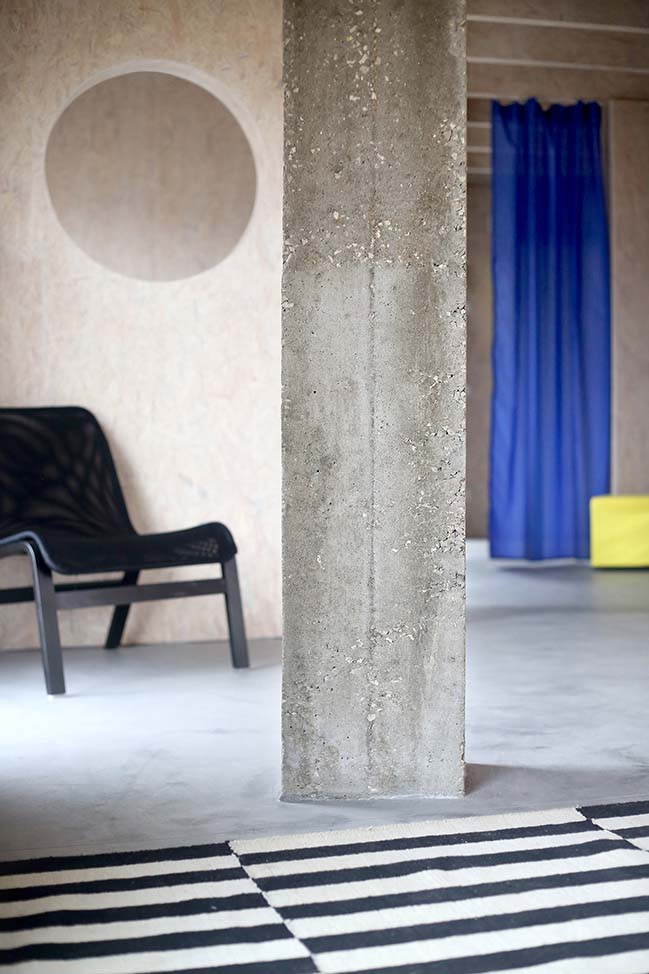 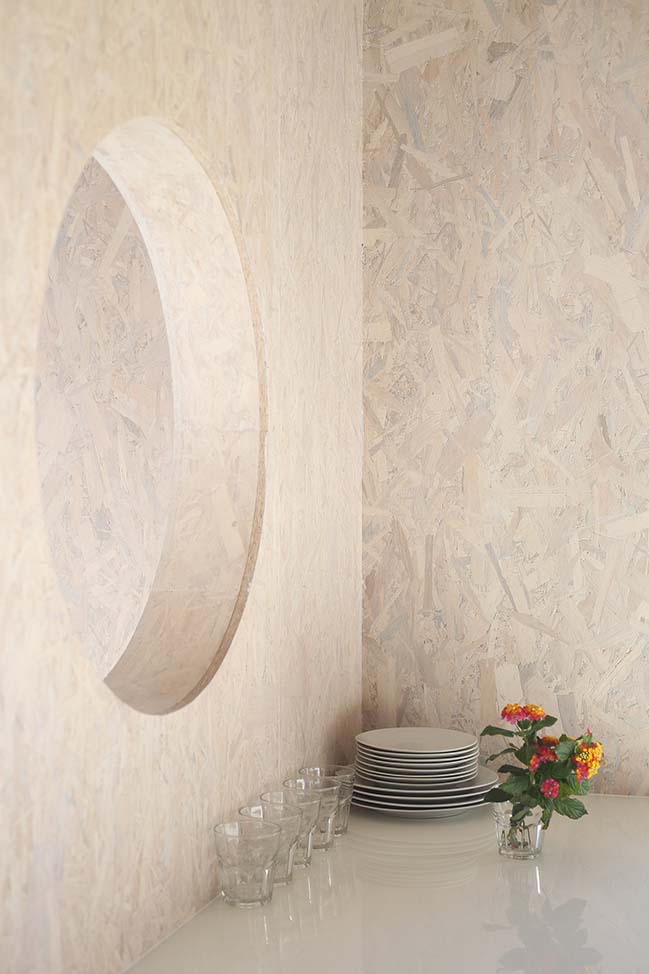 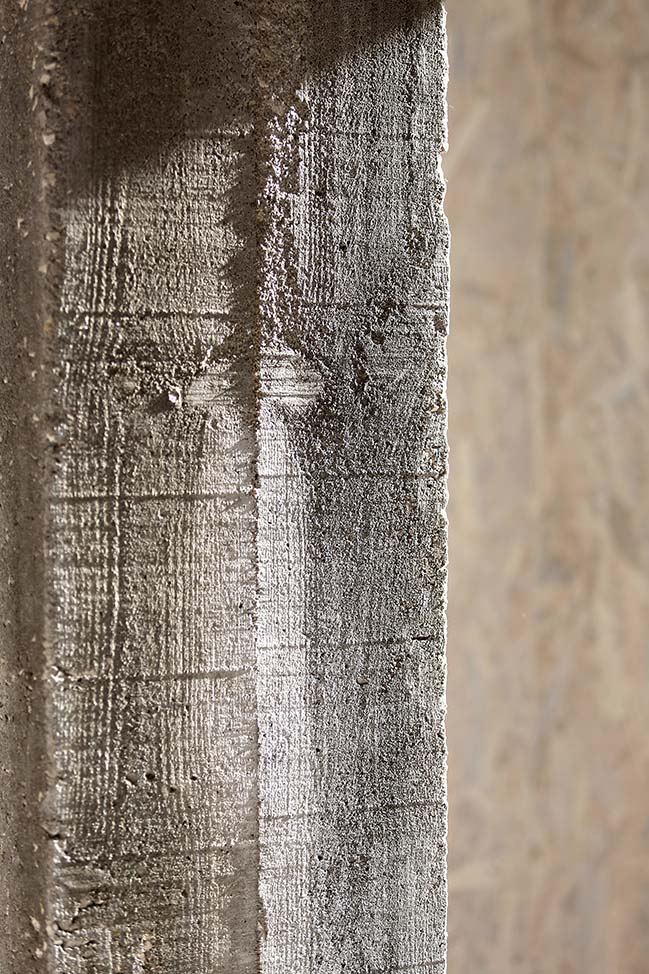 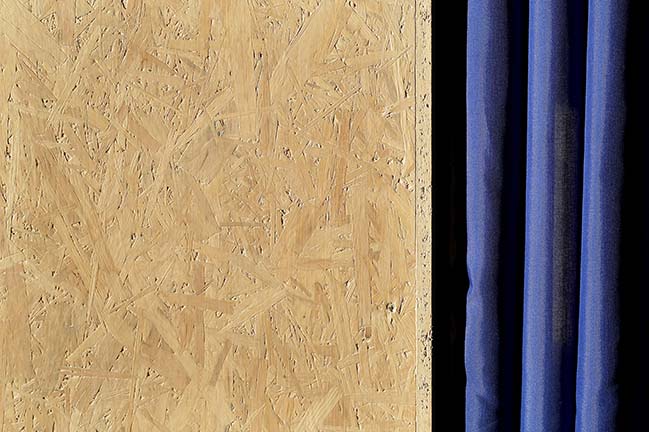 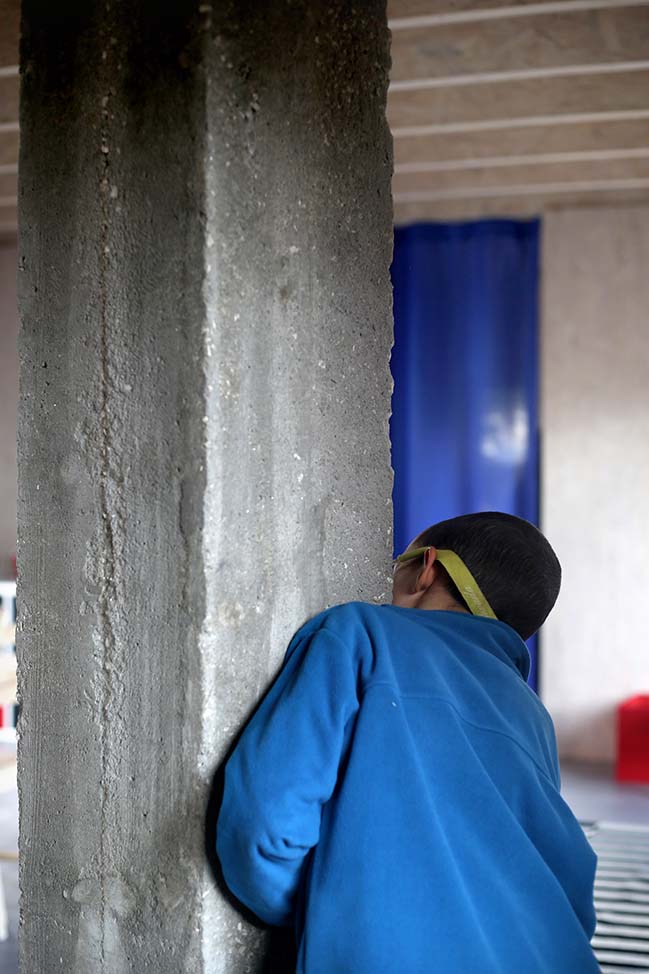 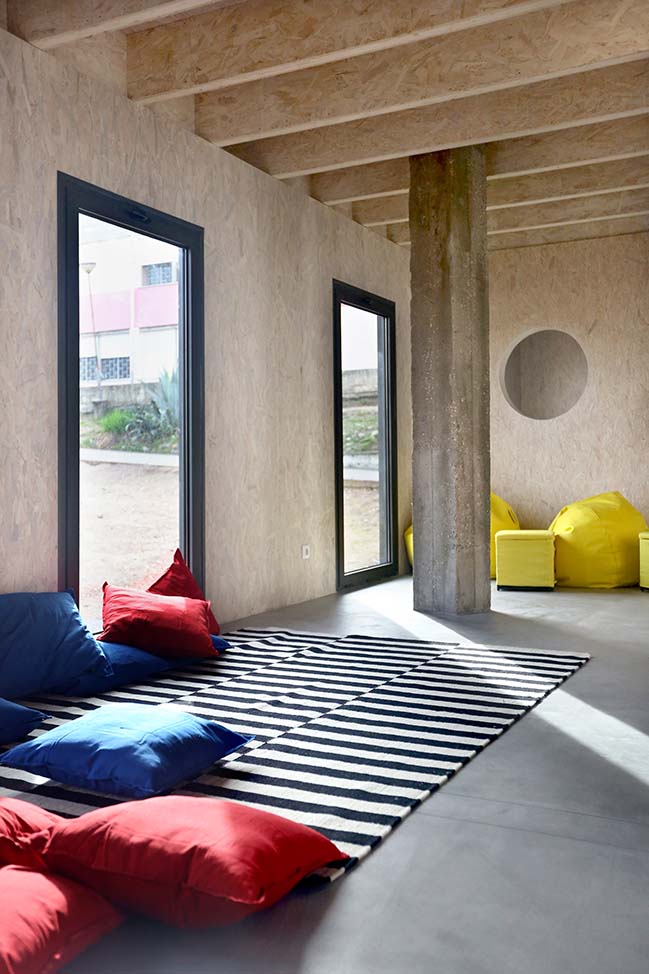 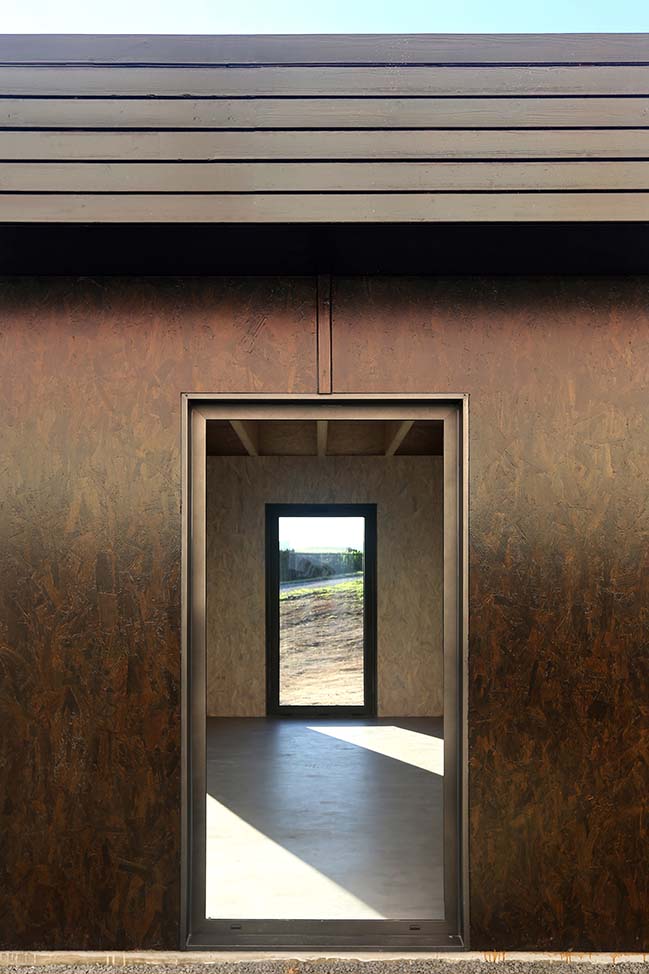 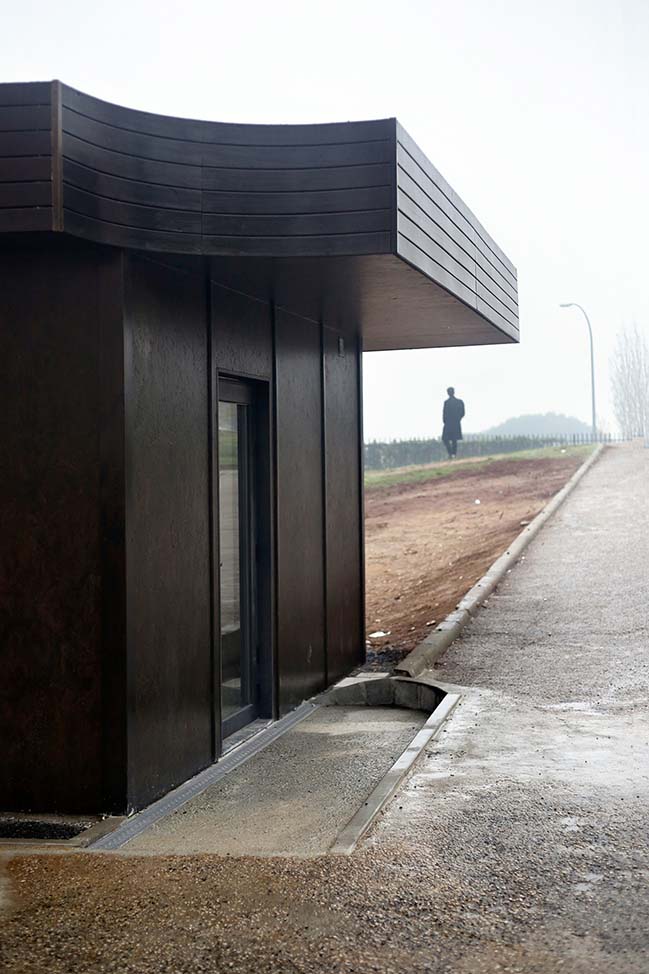 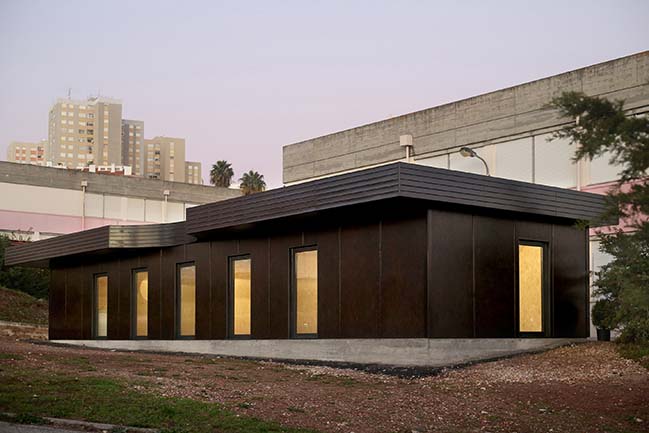 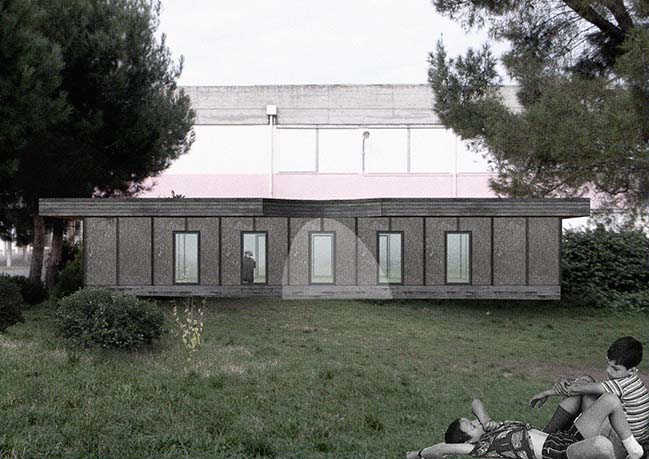 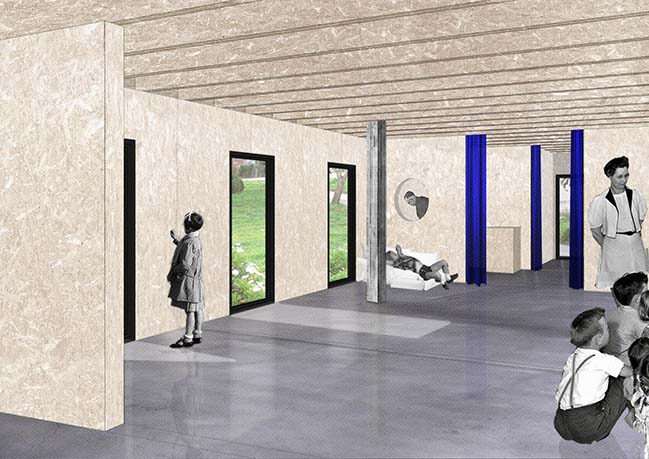 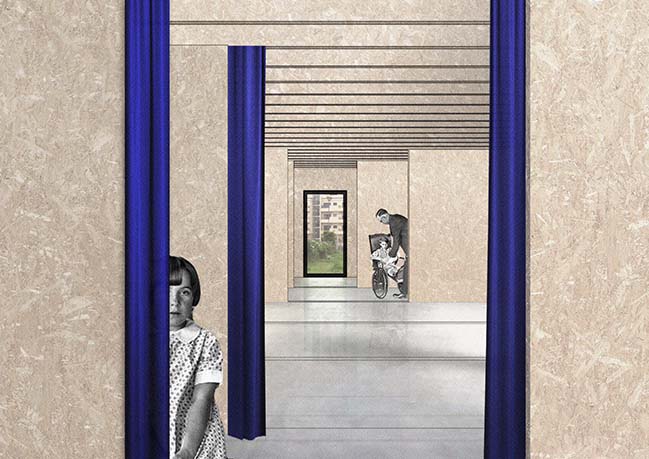 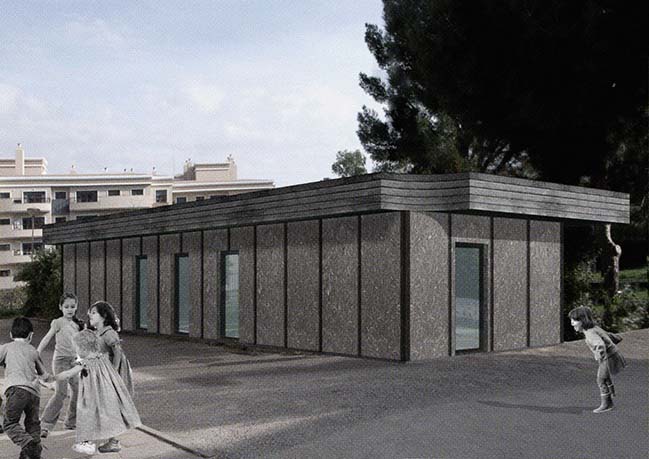 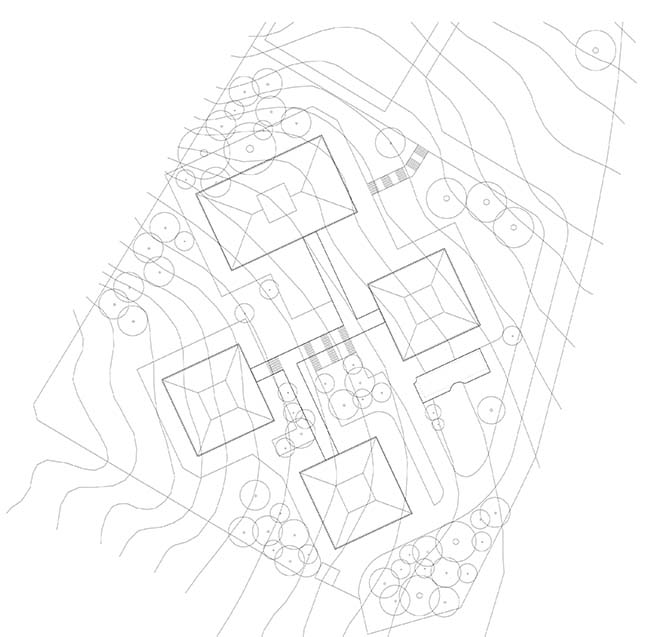 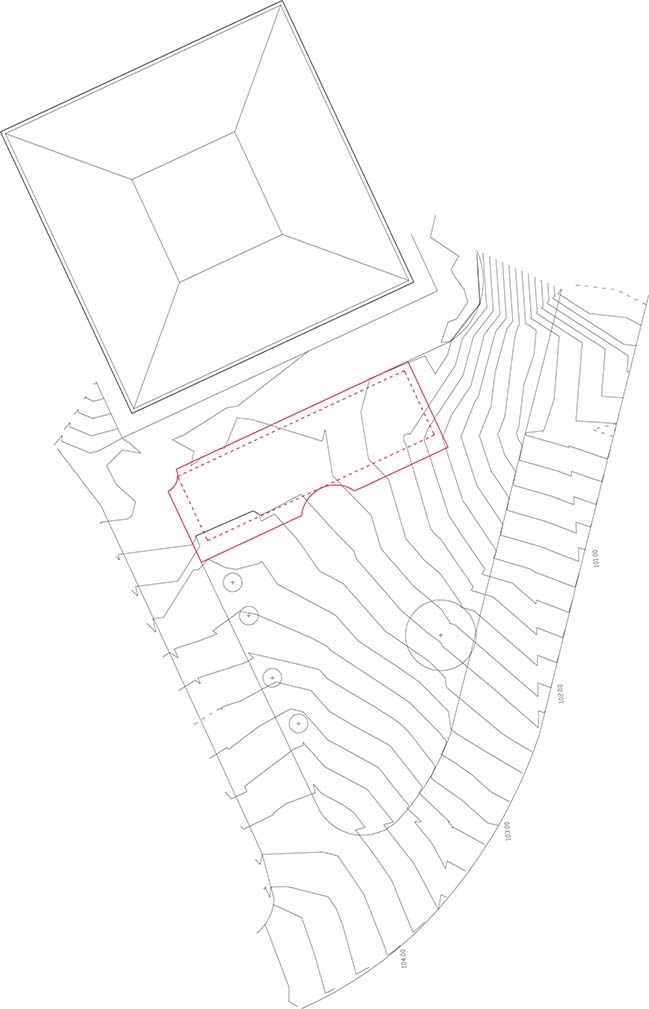 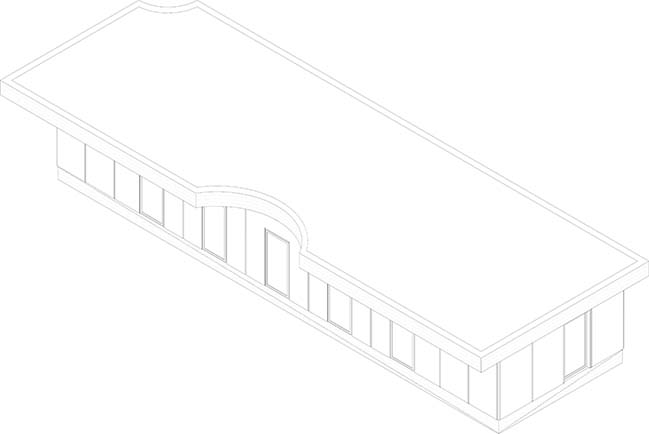 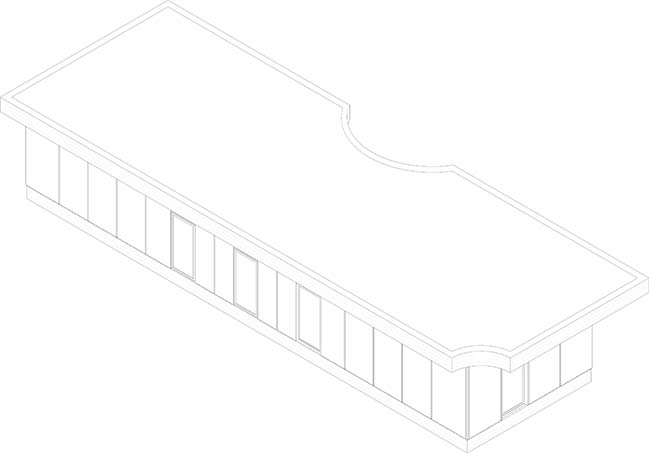 03 / 31 / 2018 NOVERCA is a project of a multisensory space for the students of Maria Veleda School, in Portugal