Since December, the Stevns Klint Visitor Center Foundation has held an architectural competition to find out who will draw the upcoming visitor center for Stevns Klint World Heritage Site... 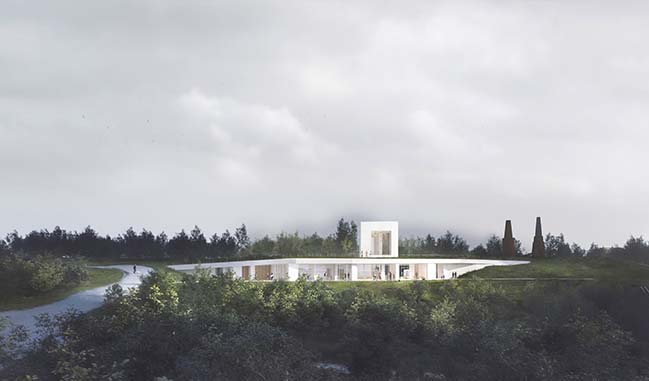 Now the winner is found!

The winning design studio is Praksis Arkitekter, which wins with a project that delivers both the architectural class and practical function that a visitor center must live up to.

'We wanted a world-class visitor center, and the project we have chosen lives up to expectations,' says the chairman of the Stevns Klint Visitor Center, Per Røner, and emphasizes that all four of the architectural competitions had a very high level.

He adds: 'The location of the visitor center in the limestone quarry creates a natural access to the sea and the countryside. And with the frame above the fracture as a drop to the visitor center, we give visitors a unique journey 'down through the cliff's layers'. It is an original thought I look forward to seeing done in practice'. 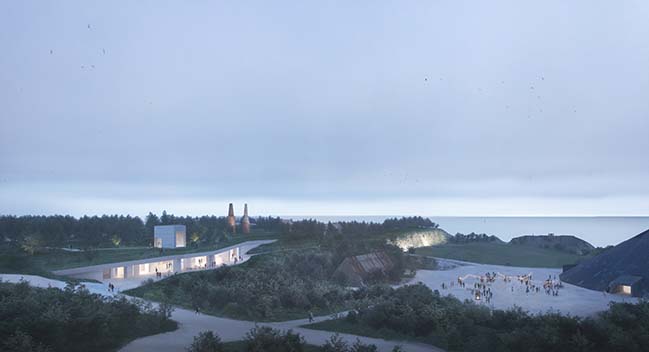 Outside the visitor center there will be a path that runs between the 'UNESCO wall' with all the layers of the cliff as well as the coastline where the cliff fades.

Architecturally, the center appears with a clear reference to the materiality of the quarry, with limestone being used as facade material.

Stevns Klint was named UNESCO World Heritage in 2014 because it is the best place in the world to see the traces of the asteroid, which for 66 million. years ago, more than 50% of all life on Earth was extinct, including the dinosaurs.

Boesdal Lime quarry has been an active lime quarry until 1978. The lime quarry still contains the Pyramid, which was used for storing crushed lime, a smaller dry barrel and the remains of two shaft kilns.

Facts - Architecture competition and visitor center
In November 2015, Stevns Municipality received an exemption to build a visitor center within the beach protection line. Nine other projects around Denmark received the same exemption, but the World Heritage Visitor Center is among the first to be realized.

The construction of a visitor center and the architectural competition has been made possible through a generous donation of DKK 80 million from A.P. Møller and his wife Chastine Mc-Kinney Møller Fund for general purpose, Augustinus Fonden and Aage and Johanne Louis-Hansen Fond. 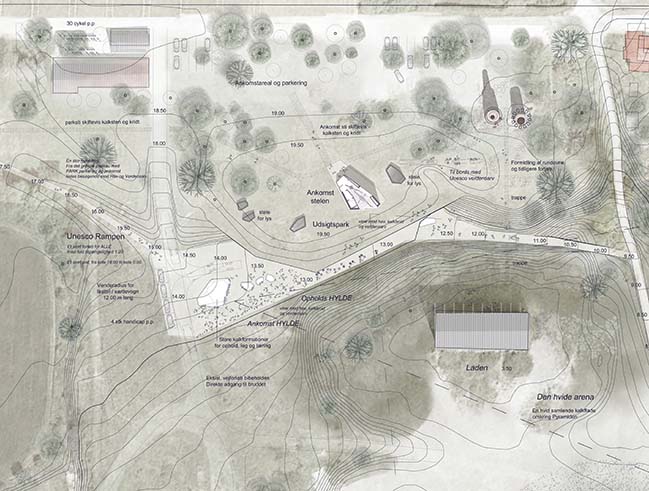 The final winner was Practice Architects. Part of what the adjudication committee has particularly praised is the location of the building, which fits well into the landscape and gives a beautiful view of the sea and the top of the pyramid. At the same time, the location strengthens the visitor center's role as a portal to the entire world heritage site and all the pearls along Stevns Klint, for example: the Cold War Museum Stevnsfort, Höjerup, Stevns Fyrcenter and Holtug Kridtbrud.

The judges also highlight the idea of ​​going from the ground to the ground and into Stevns' geology. And then they highlight the new path that connects the building with the large limestone wall that is part of the World Heritage. The path has already been named the UNESCO path. In addition to the architecture and adaptation of the landscape, the judges have also looked at whether the house will work in everyday life with good access conditions and good features inside the house.

In late summer 2019, there is a winner of the mediation competition that is currently running. Here, three international design houses are competing to be allowed to carry out the dissemination of the World Heritage. The design houses are: ART + COM Studios (Berlin), Event Communications (London) and Tinker Imageneers (Utrecht).

09 / 05 / 2019 The winning design studio is Praksis Arkitekter, which wins with a project that delivers both the architectural class and practical function that a visitor center must live up to.