IMAGO has won several prestigious awards including the Future Project of the year in the experimental category at the 2018 World Architecture Festival, the 2016 Canadian Architect Award of Excellence and most recently the winner of the jury and public choice awards in ideas and prototypes category at the AZ Awards 2019. 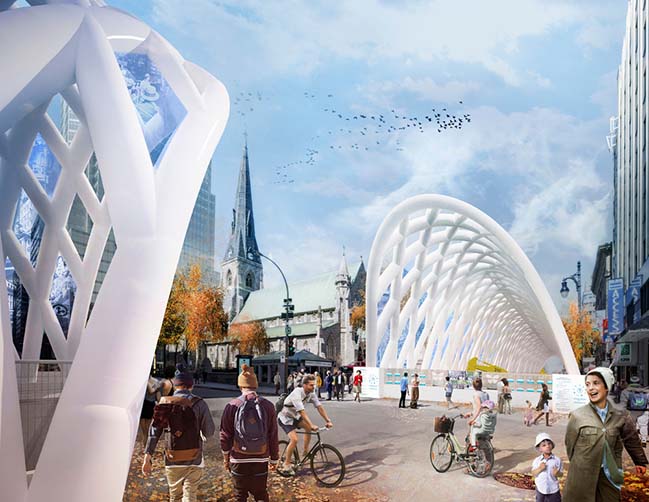 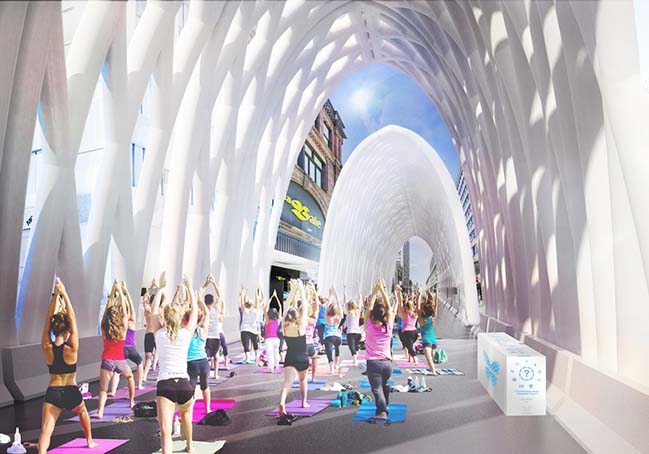 From the architect: Several studies and public consultations have highlighted the need to intervene to reduce the negative impacts of major infrastructure construction sites on commercial arteries.

IMAGO is an installation project that offers a poetic and versatile strategy in response to the numerous challenges of such essential sites. It is a graceful intervention, a distinct insertion that offers users the delicateness of nature in the city. Through its innovative and unique response to this global challenge that touches many cities around the world, IMAGO has won several prestigious awards. 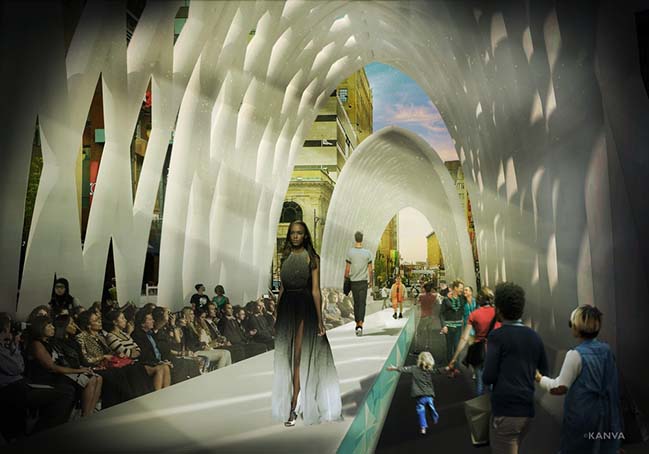 Project Description - St. Catherine street in downtown Montreal is undergoing a four-year infrastructure improvement plan along several blocks, including underground infrastructure upgrades, incorporation of new public transit systems and increasing pedestrian sidewalk area and access. Despite the urgency of the work and long-term benefits, the project raises issues security, cleanliness and user appropriation that will have a continued impact on adjacent retail. IMAGO was the winner of the Vivre le chantier Sainte-Cath ! international competition, which aims to reduce nuisances as well as develop a new way of approaching the evolution of our city. It is a matter of transforming, through design, these major infrastructure works into a key moment. The Jury of the World Architecture Festival commented that the series of inflatable, mobile biomorphic structures “offers the chance for behavioural change and embodies innovation at its core. It can also be as a paradigm elsewhere.” 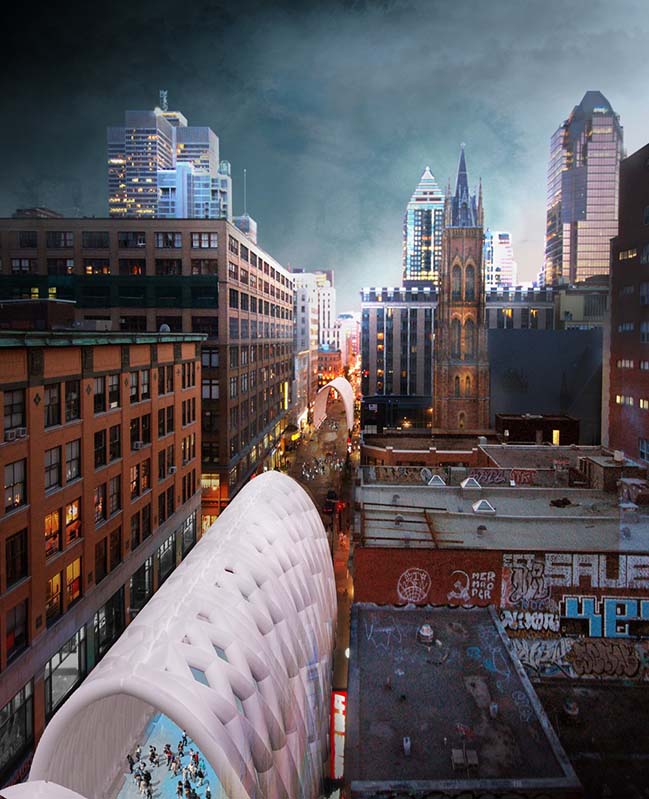 Witnessing the constant evolution of this place, our collective interpreted the metropolis as a living component, in transformation, in movement, modelled by the generations. This reflection led the team to draw a parallel with biological metamorphosis. More particularly, the process resulting from a theme of natural sciences guiding an organism from its embryonic stage to its final stage, called IMAGO. These phases of development led to the emergence of a vocabulary, an aesthetic and a technical approach inspired by biomimicry. These processes, similar to the development of the living being, are thus reflected in the evolution of our city. The formal concept is then presented in the form of a series of biomorphic structures deployed across the site to house, protect, animate and articulate the site and its users. In parallel to the construction site along St. Catherine Street, the modules that make up IMAGO propose to inhabit various public spaces across Montreal’s 19 boroughs (neighbourhoods). From animating a highly trafficked market in Rosemont-La-Petite-Patrie, to creating a fun winter playground on the Mont-Royal’s skating rink, IMAGO promises to continue to be a community marker and gathering point for the residents of each neighbourhood.

An information kiosk and signage complete the inflatable module. 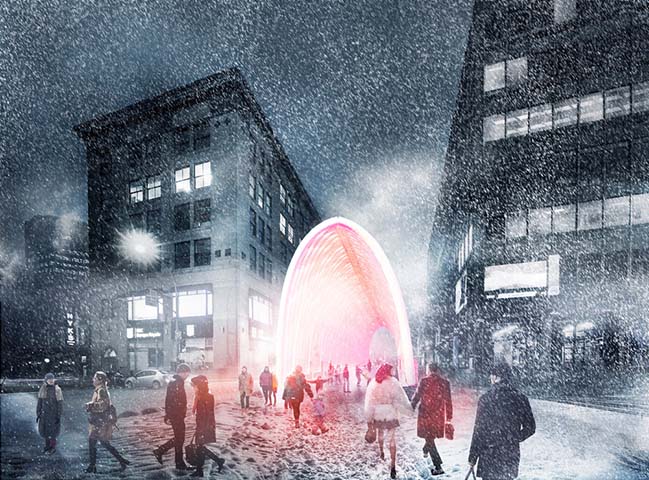 Inflatable module - Because of its scale, its fluid form, its aesthetic purity, IMAGO contrasts with its urban environment and offers a strong and bold visual identity. It corresponds to the distinctive character of Sainte-Catherine Street. The intervention possesses a great potential to be used as an identity tool, communication tool, operational tool, and experiential tool to re-imagine the construction site and the cityscape. IMAGO seeks to ameliorate the streetscape’s overall appeal, improve its functioning and promote economic growth over the long term. 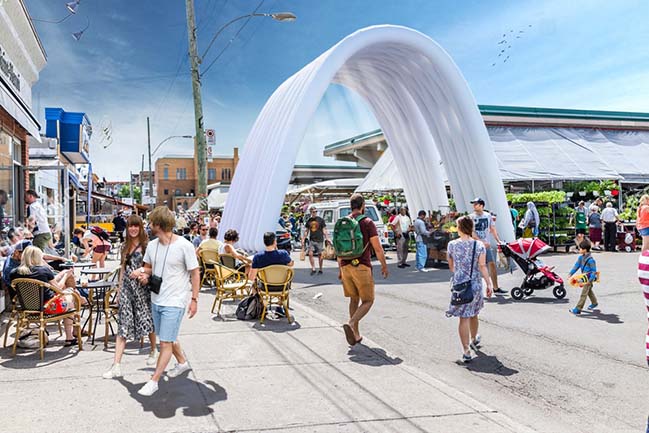 The intervention consists of a series of modular catenary arches, each composed of an inflatable structure anchored to an approved concrete construction fence. IMAGO adapts to the construction site in several ways depending on the work being performed. The inflatable module is an inflatable structure installed on 2 concrete ‘jersey’ barriers with steel base plates, electrical equipment, and anchor straps. The inflatable structures are composed of a high-resistant polymer that is entirely recyclable, erects easily due to its structural efficiency and occupies the site at the appropriate scale, all while being light and easy to move. A typical assembly is composed of 2 Inflatable Modules, yet it is possible to assemble up to 5, all connected to an air distribution box. A single module is not to be deployed independently. Multiple configurations are possible for assembling modules. Modules can be assembled in a straight line, but they can also have a radial configuration or a combined configuration that would create new entryways and allow the inflatable structure to avoid obstacles. 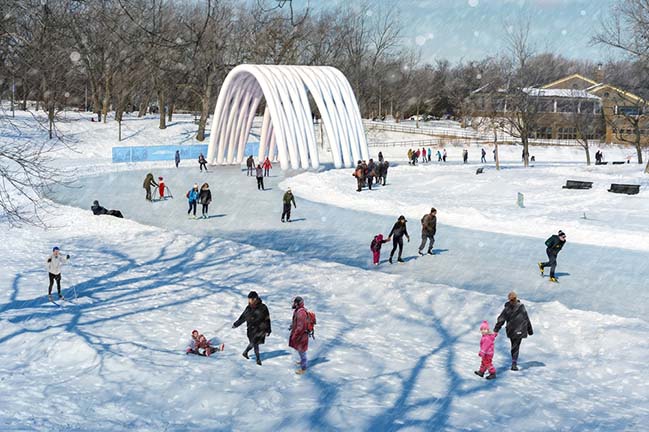 One inflatable module measures 34’ in height, 43’ in width and about 20’ in length. The maximum length can be of around 100’ if five modules are assembled.

The simplicity and modularity of the installation offer flexibility and versatility both in terms of its sprawling, caterpillar-like nature and ability to adapt to different site conditions. The modules are erected gradually by attaching one to another growing until IMAGO covers the extent of the work being performed. The modularity of IMAGO makes each component affordable; the number of units can be easily multiplied based on the budget. Since the main material is air, the modules can be handled easily and stored in a fraction of their original volume. 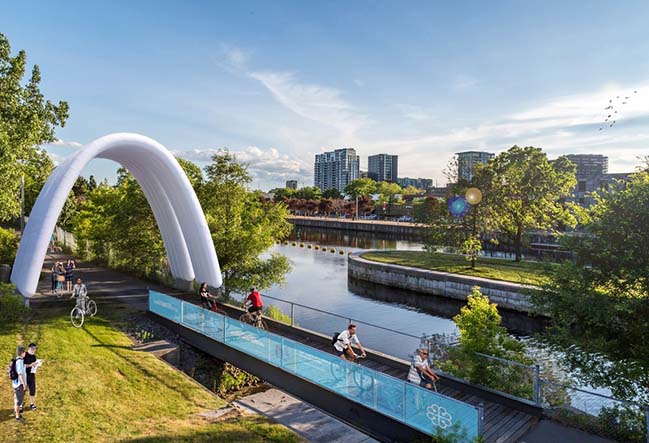 Kiosk  - Anchoring the site, the kiosk disseminates information about the construction work to the general public; it is the meeting point between the work taking place underground and the citizen. Specifically, the kiosk reveals the values and benefits of the current infrastructure work as well as future work through digital tablets and wall-mounted screens. The kiosk also offers many services to the general public including bicycle pumps, water for bottles, electricity to charge mobile devices as well as lounge space and terrace. 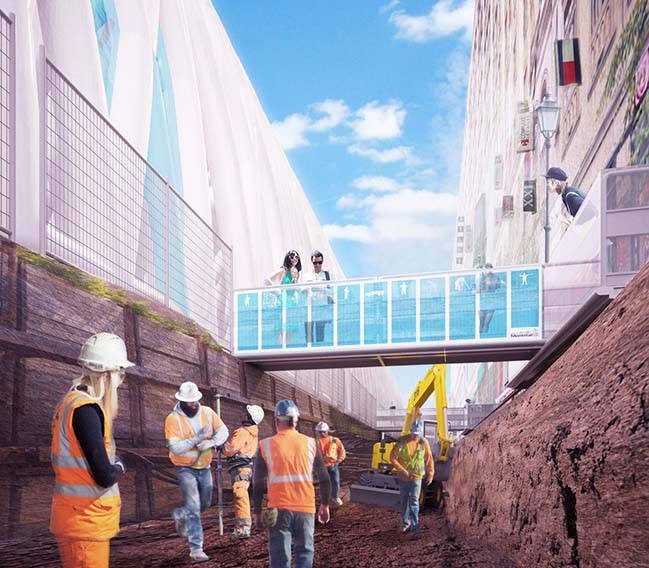 The kiosk is a recycled shipping container; a portion of one of the longitudinal walls unfolds during hours of operation to invite users inside and create an outdoor terrace space, folding up securely at the end of the day. This compactness is convenient, as the kiosk moves location as the construction site migrates over the four years. The exterior of the kiosk is painted the ‘IMAGO’ light blue and flanked with the project logos, becoming an easily recognizable marker for the general public as the kiosk is relocated along with the construction site.

Signage - The signage orients the general public throughout the construction site. The graphic language was conceived to be informative, clear and precise so that users can understand the scope, duration and context of the work. To place the intervention in time, site graphics illustrate the transformation of the public domain of using street sections of Sainte-Catherine Street throughout the significant eras of its development, acting equally as an open-air museum testifying to the history of Sainte-Catherine Street from the past to the future. The signage is displayed in the form of large-format horizontal banners that are attached to construction site fencing; the same graphics are also adaptable to display cases in metro stations, on city buses and any other public means of advertising. 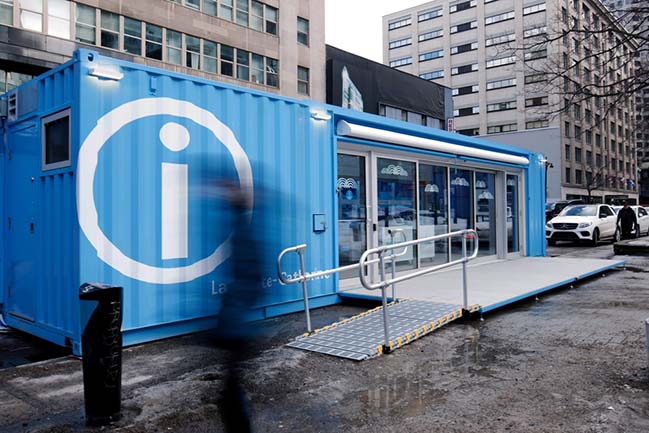 IMAGO is forward-thinking in its approach to dealing with an otherwise disruptive activity. IMAGO is a catalyzer of interaction through its three strong elements: the inflatable structures, the kiosk and the signage that all coexist to create a rich narrative and dynamic construction site. IMAGO is inspired by biology and biomimetics; just like nature transforms through evolutionary processes and cycles, the city is also in constant transformation. IMAGO pushes the notion of optimism from transformation through a playful and experimental intervention. 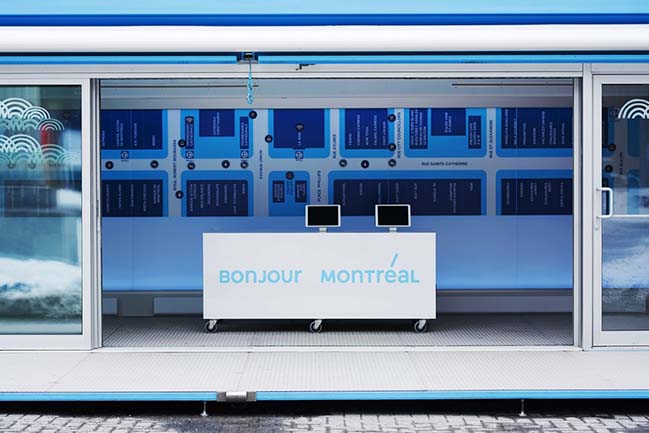 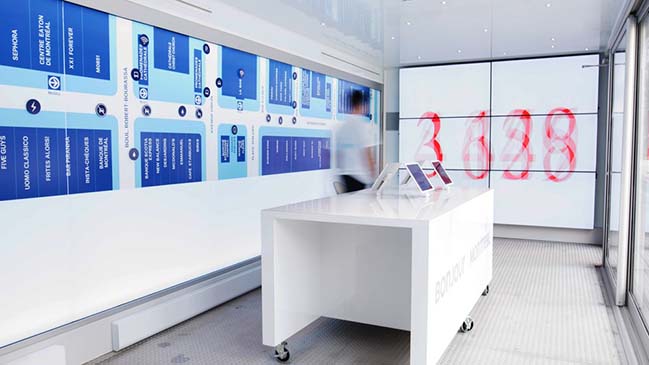 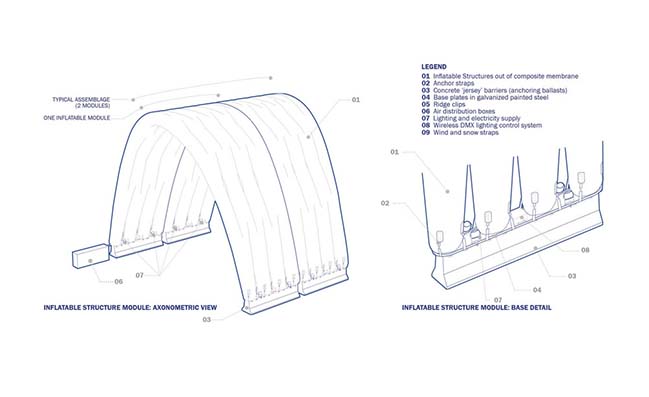 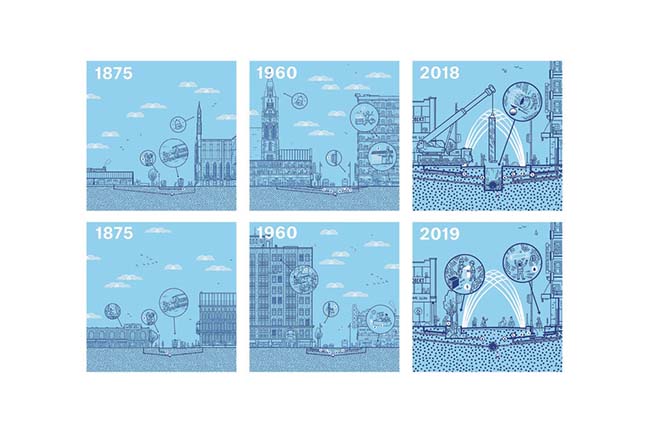