The project brief is to design an off-coast floating hotel with sustainability at the forefront of the design criteria. References to land reclamation and renewable energy are of importance... 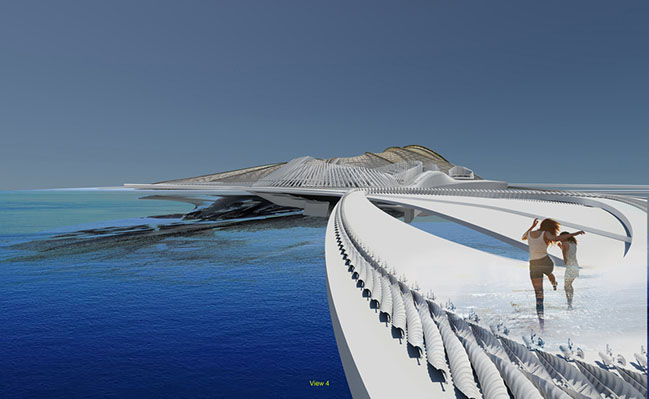 From the architect: The reclaimed hotel floats south of the Australian external territory in the Indian Ocean, where an increase in plastic pollution has damaged ecosystems to the Cocos (Keeling) archipelago, trapping and killing hermit crabs amongst the crustaceans that are an important part of tropical environments as they disperse seeds and aerate and fertilize the soil, so their decline could have a significant impact on surrounding ecosystems. 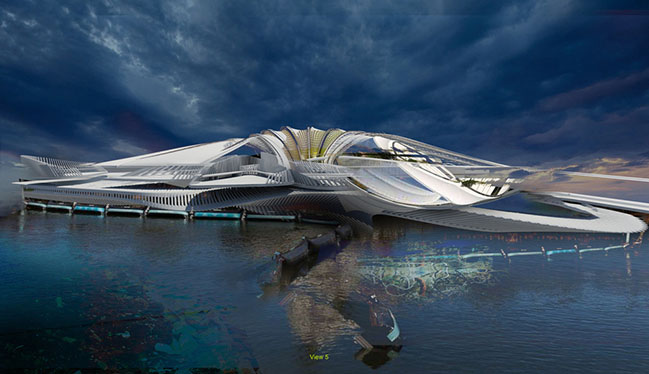 The design has evolved into an ocean-plastic artificial island. Simulation software has been used to understand the movement and migration of large plastic waste in our oceans. This plastic waste has been sailed across oceans by ocean gyres. Margot Krasojević Architects developed an infrastructure that would support and engage with the accumulation of ocean plastic waste. 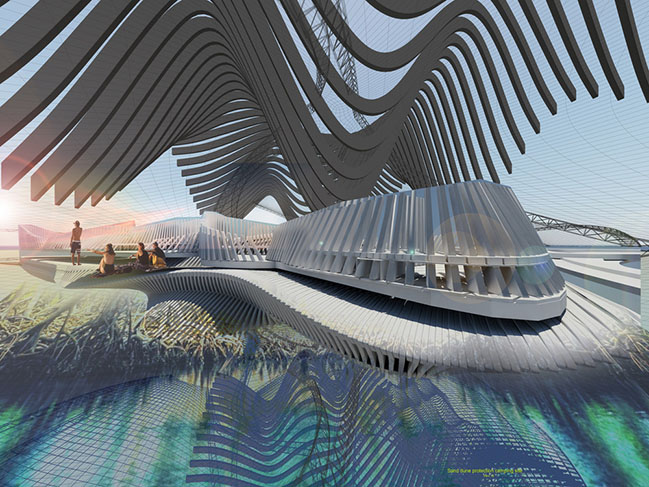 The ocean current simulation software creates a mapping of the accumulation of the highest density of plastic waste that was used as a starting point to understand how to collect this waste and put it to constructive use, in the production of an artificial island for habitation. As the brief requested a hotel, this was a starting point. 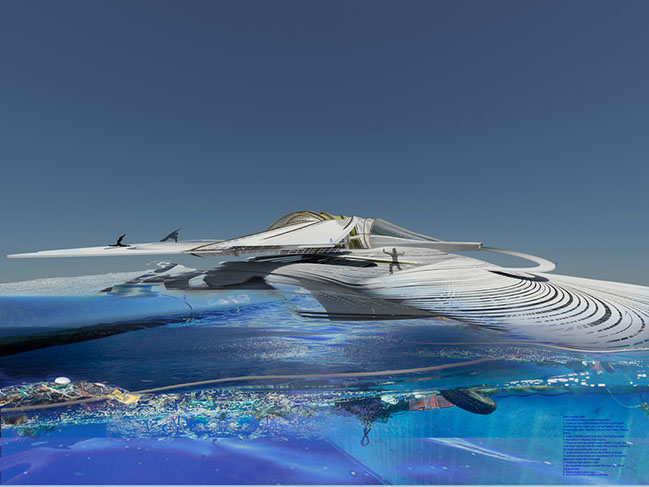 The concept of the hotel itself is to evolve as an ongoing, self-repairing structure that has grown from the carelessly discarded plastics captured through its filters and extending inflated arms that gather and deposit plastics in order for it to be placed in mesh bundles, which act as floatation devices. The idea is inspired by a Dutch team that has been looking into using different scavenged materials to reclaim the land.

The island consists of mesh-filled bags of reclaimed ocean plastics from bottles to tires; this is then weaved together to create a floating landfill. The area is anchored to the ocean floor whilst sand and silt are deposited on the reclaimed plastic floatation devices. The idea is to make the area hospitable to nurture mangrove trees whose roots grow around the mesh-filled plastic bags, cementing them to create a stable structure. Mangroves have been used as methods of flood defense by capturing or trapping sediment to self-build a type of defense wall as well as acting as flood prevention due to their roots that swell and absorb the water preventing the island from capsizing or sinking.

The island relies on this stage of growth in order for it to become habitable. In this project, they used anchors to locate and position the trash island and created a grid for reclaimed plastic bundles to sit within, after which layers of sediment and sand deposited over the flotilla defined a structural base into which mangroves were introduced. References to Danish land reclamation and plastic waste from 2010 are of the essence to understand or clarify the necessary approach and potential technologies of transforming plastics into a habitable landfill.

A major design element is a pleated structure of interlaced webbing, made from biodegradable-seeded concrete fiber mesh. These ‘tentacles’ are released from the ceramicrete upon contacting with rising water levels. They expand and inflate into the oncoming swell sinking as they absorb water creating an artificial barrier trapping sediment and absorbing floodwater.

In principle, they are the artificial mangrove roots that are the island’s life jacket in an emergency, as they expand the trapped sediment creating artificially engineered land almost like an inflatable runway. Each fully immersed tentacle expands and falls on top of the next creating a temporary wall preventing water from flooding the island whilst supporting it in case of damage. Once the storm stabilizes, the tentacles are emptied. Using pumps powered by solar panels, the water is redirected off of the island and released into the Indian Ocean. The tentacles expand on impact with water pressure retaining the island's buoyancy.

This interlocking web is an open-ended structure that captures sediment and allows for natural movement across the island. It acts like nets trapping and creating a framework for the sediment to lodge and grows in depth and density in order to increase the land building sediment for the mangroves and plastic pollution substructure whilst attempting to dampen waves functioning as a breakwater, absorbing energy and protecting the shoreline from further damage. 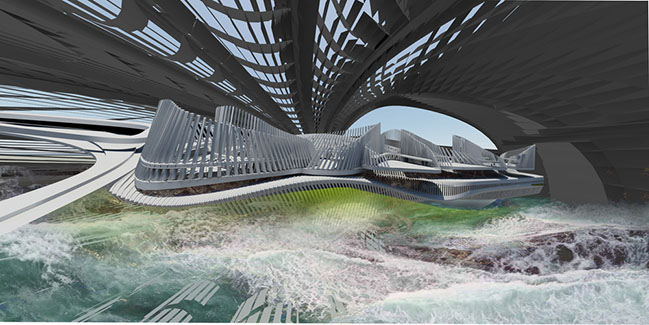 The hotel offers a compartmentalized series of canopied rooms and land for camping. Showers use filtered and distilled seawater pumped onto the facility using solar energy.

The island grows according to its inhabitants who reach its shore by boat. It is a self-build land hotel that becomes a collective community building for themselves and others. Utopian getaways, correcting the environmental imbalances of plastic pollution in our oceans whilst enjoying the beauty of a self-enriched, self-sustained, autonomous ocean island escape. 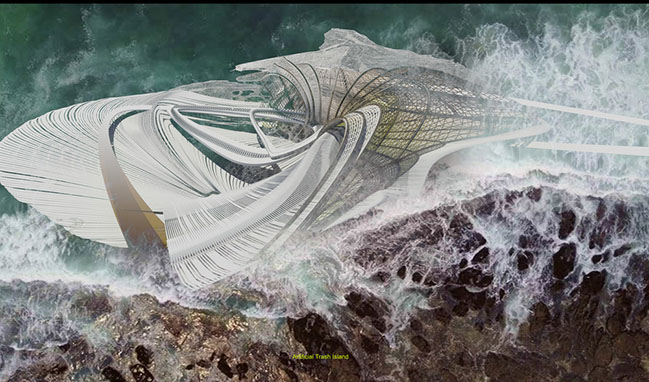 Ocean current simulation software identifies patterns of plastic pollution migrating and circulating through ocean current pathways. These clusters of ocean pollutants and their collection and filtering are the main design criteria involved in the location and evolution of the island. 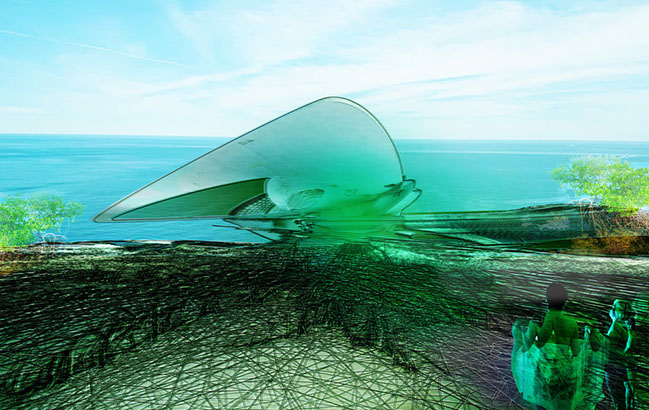 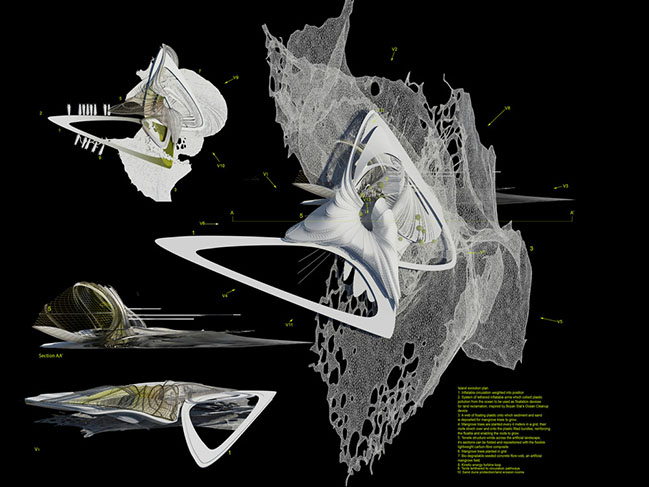 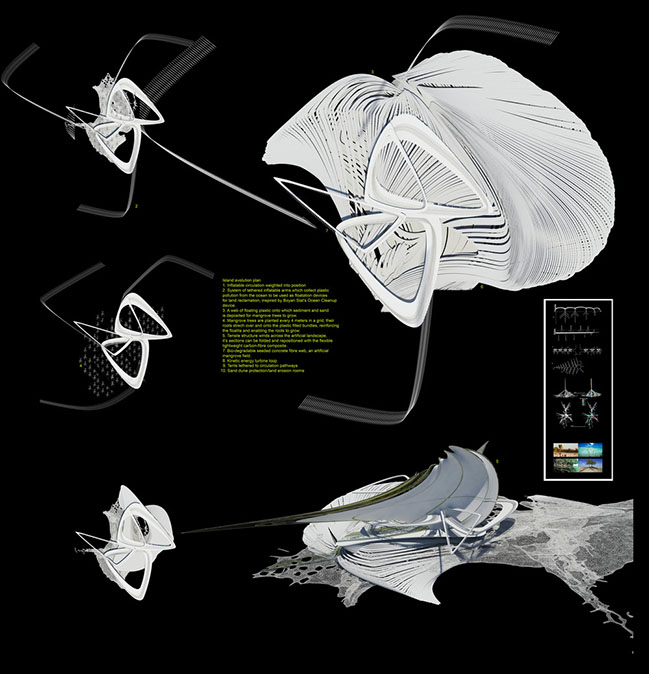 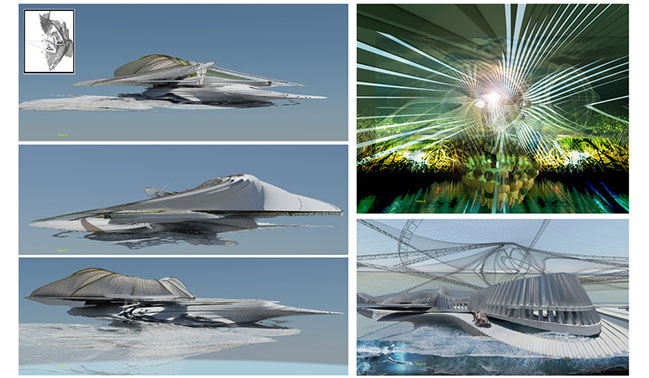 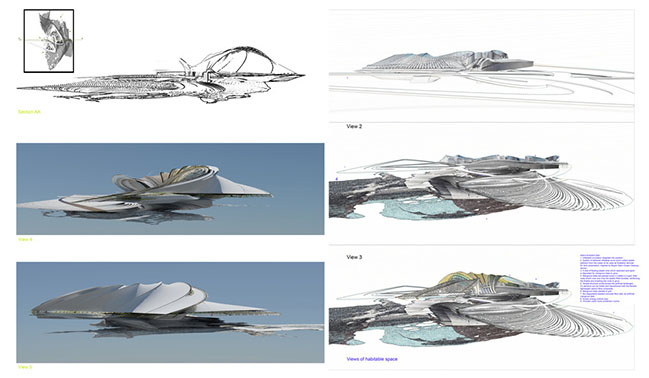 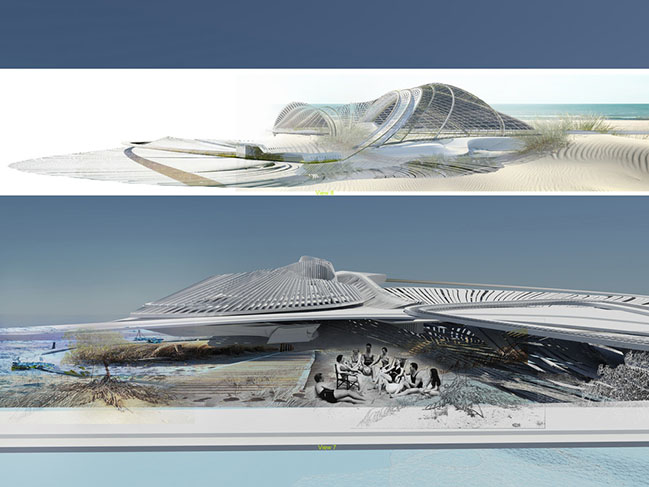 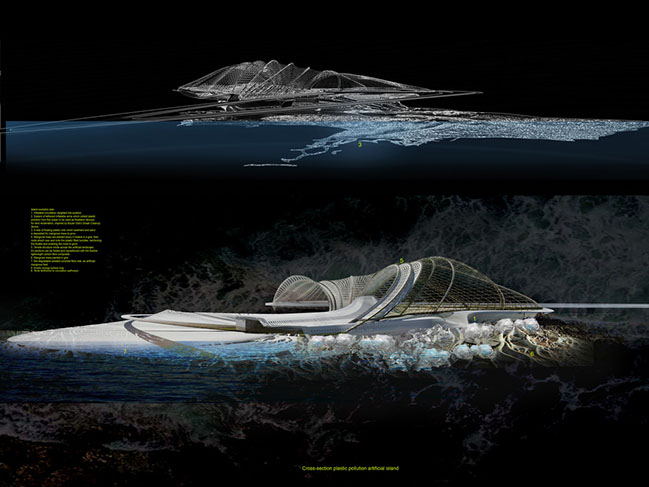 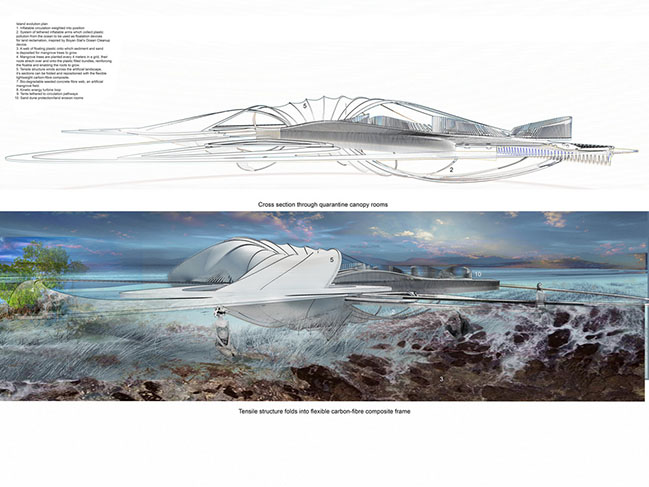 05 / 06 / 2021 The project brief is to design an off-coast floating hotel with sustainability at the forefront of the design criteria. References to land reclamation and renewable energy are of importance...