UNStudio in the winning consortium for the design, build, finance and operation of a landmark Congress and Conference Centre in the Netherlands... 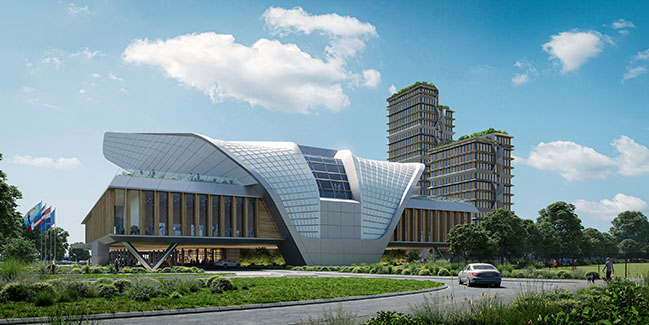 From the architect: Brainport Eindhoven is currently one of the leading innovative technology regions in Europe. To enhance its international positioning as an inspiring region of technology, design and knowledge, the Dutch city of Eindhoven has the ambition to realise a clearly identifiable, new, state of the art congress and conference centre.

A competition was therefore organised in 2020 inviting proposals for the design of a highly visible building, in addition to finding a consortium that can build, finance and operate a congress and conference centre on an international level.

To form the Elysion Consortium, DVP (Diepenhorst de Vos and Partners) and UNStudio decided to join forces with Van der Valk as client/operator and Huybregts Relou as contractor. Together with the design team of Van der Valk, Tielemans for structure and Quant Architecture, the team was completed with additional specialists in theatre technology and acoustics (PBTA), MEP and BREEAM (DVP smart concepts), Cost consultancy (ISIS bouwadvies) and future congress (Sixfingers). 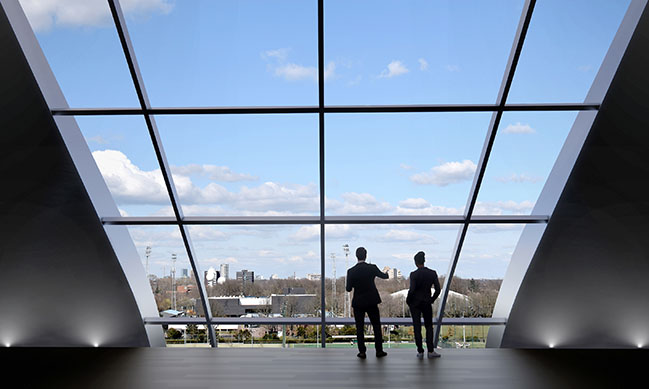 In their proposal, the Elysion Consortium proposed extending the current Van der Valk Congress and Event location, which also houses hotel and restaurant facilities and is located at the border of a large parkland area that enjoys excellent connections to both Eindhoven Airport and the city centre. By so doing, the proposal facilitates the renovation and expansion of existing facilities, thereby limiting its impact on both the city centre and the environment. 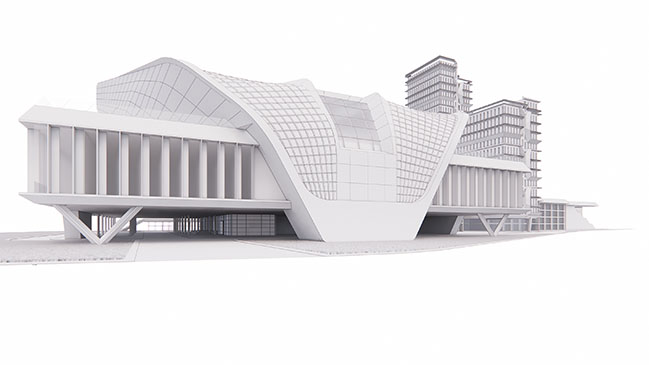 On Thursday, April 29th, after careful assessment based on the award criteria, the members of the multidisciplinary assessment committee individually gave a positive opinion on the Elysion tender and the provisional award was granted to the Elysion consortium.

The consortium's ambition is to expand the existing multifunctional space to a total area of 4,000 m2 and add a new 1,500 capacity flexible auditorium with a vertical foyer housing breakout spaces and catering areas. 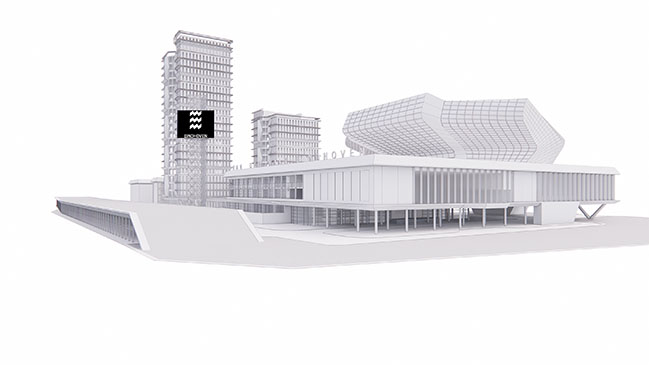 The design
UNStudio’s Design Proposal for the Elysion Congress Centre (ECC) has been structured around 5 architectural interventions:

High impact landmark, low impact on surroundings
The challenge for the city to create a landmark building, alongside the challenge for Van der Valk to maintain operations during the construction process, resulted in a unique design solution in which the extension of the congress centre is placed next to the existing building, while the auditorium is placed on top of the conference centre building.

This large cantilevered auditorium structure makes it possible to keep the existing hotel and conference centre fully operational during construction, while creating a clearly identifiable building with access to green parkland, excellent connections and space for logistics. 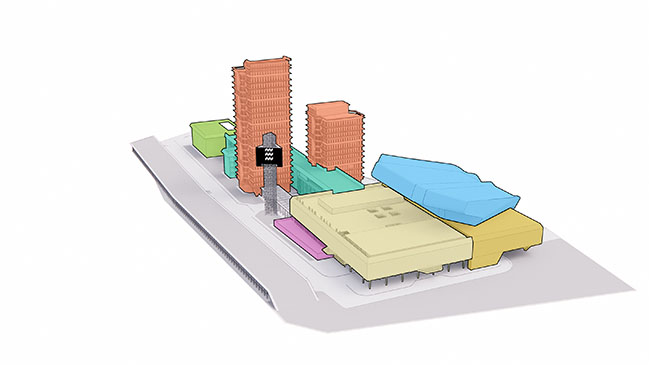 A foyer that connects people and programme
With its wooden staircases and vertical green gardens, the foyer functions as the main connector from the ground floor through the different levels of the building. This vertical foyer also houses multiple areas for relaxing, working and informal meeting for visitors. In addition, the foyer connects the entrances to the congress and conference areas, with multiple bars and access to outside spaces. It also functions as the connector for all the facilities and main logistics. 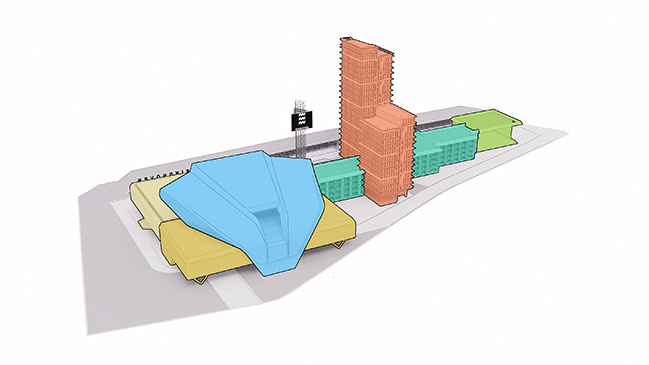 Green surroundings and a sustainable approach
The ECC is located at the border of the ‘Genneper Parken’, a large green space between the ring road (Brainport Avenue), the high-tech campus and the city centre.

The integration of the project into the Genneper Parken is visible on multiple levels. The park landscape flows onto the roof and under the elevated building. Visitors can relax on the roof or in the shade under the building and enjoy a healthy juice or a coffee before moving on. The Genneper Parken also houses large sport facilities, and as such acts as a driver for physical, mental and social health.

In the Elysion proposal, a part of the existing hotel building will also be demolished to strengthen the ecology of the adjoining ‘beekdal Tongelreep’ - an important waterway and brook valley with high scenic, ecological and cultural-historical value.

The facade of the congress centre is principally made from wood and glass. The ambition is to couple this with nitrogen dioxide absorbing surfaces - an innovative new nano-technology that can capture pollutants from its surroundings.

The new buildings will also be energy positive, generating more energy than they consume. By using innovative bromide flow batteries, energy can be stored for use during peak times. In addition, the location houses the largest regional charging station for electrical cars. The green ambition for the project is also expressed in the application for a BREEAM Outstanding rating for the design. 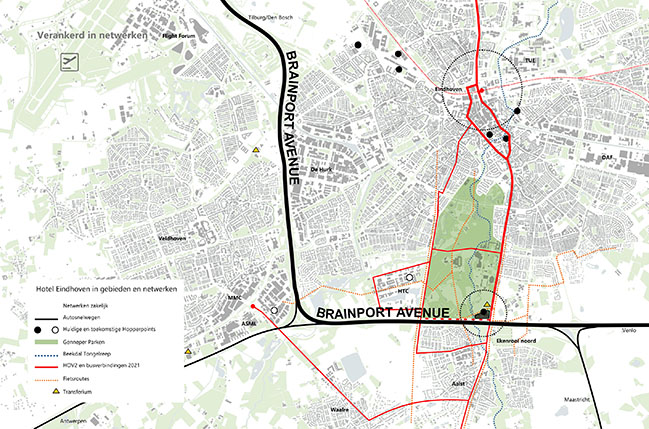 A new mobility hub for Brainport
The expansion of the congress facilities also necessitates an extension in the number of hotel rooms, parking spaces and leisure facilities. To accommodate this, the intention is to create a second hotel tower that manifests sport and leisure, while the parking area is a green extension, placed alongside Brainport Avenue.

By creating a sustainable mobility hub - with the existing park and ride and the new parking facilities - the location can not only become one of the main charging stations for electrical cars, it can also offer green alternatives for travel to Eindhoven city centre, such as the HOV connection, bicycles and other means of smart transportation. 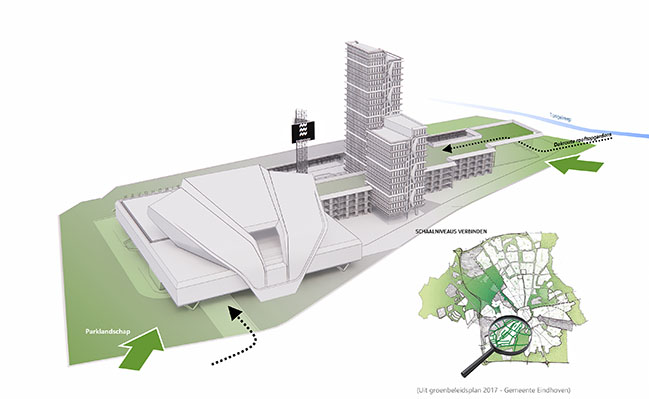 A flexible solution for feasible exploitation
In order to ensure financial feasibility during exploitation, a proposal was developed to create a flexible and hybrid design for the 1,500-seat auditorium.

By creating different configurations within the conference space, the auditorium can be divided into four independent smaller auditoria, enabling smaller conferences to take place simultaneously within the building. When configured in this way, retractable seating also makes it possible for the lower auditorium to be used as a banquet hall while the other conference rooms are in use. In addition, a recording studio located in the conference centre will make it possible to host hybrid online and live events.

The main structure of the auditorium is built from a combination of wood and steel, while a large window provides visitors to the auditorium with a spectacular view to the skyline of Eindhoven.

The new congress centre has become part of the region-deal Brainport Eindhoven, within which 7 million euro has been made available towards its realisation. The ambition is for this new facility to be completed in 2025. 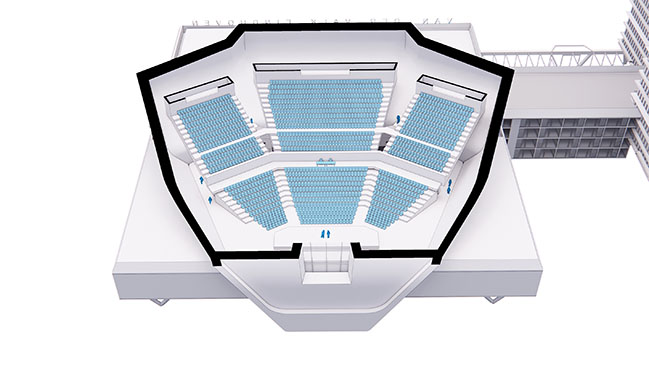 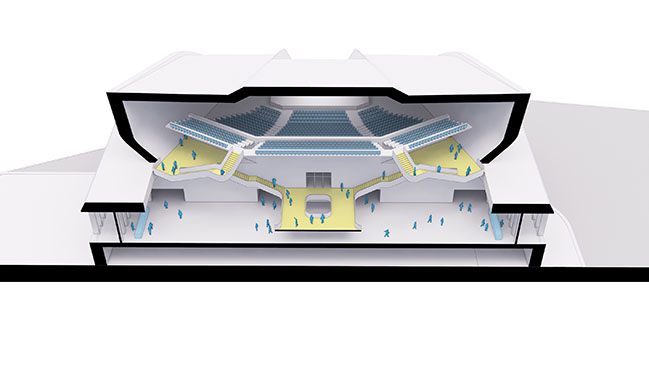 05 / 15 / 2021 UNStudio in the winning consortium for the design, build, finance and operation of a landmark Congress and Conference Centre in the Netherlands...