By the Pool House was designed to provide a sanctuary beyond a busy inner-city road for a family of 5. Drawing the pool up to the house, the interior becomes infused with ripple reflections and watery light. Pool translates to water feature when viewed from ground and first floor spaces. 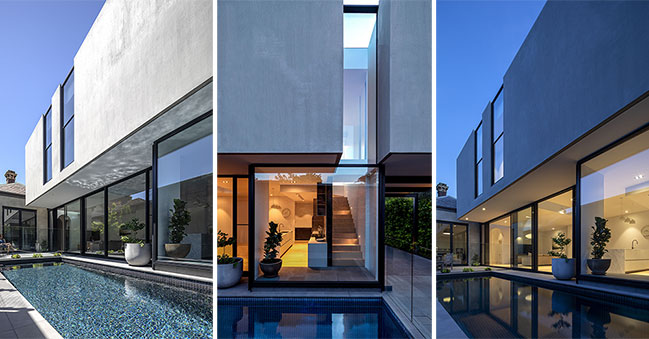 From the architect: The addition to the By the Pool house was conceived as a light contemporary companion form to the existing Victorian structure. 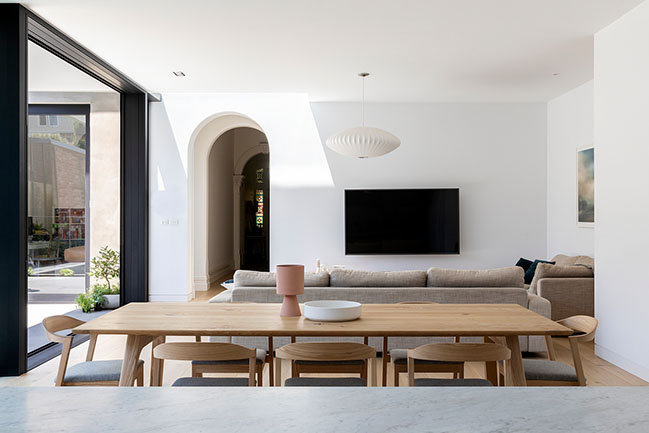 As a counterpoint to the solidity of the original inward looking poly-chrome brick house, the materiality of the addition is light weight and minimal and orientated to the north. The new form is held off the existing volume with a linear skylight that drenches the archway under with light. Full height glazing to the northern edge of the ground floor implies that the first-floor volume is floating above. The west overhang of this first floor creates a multi-purpose space that can be used for cars. The façade to the pool and courtyard is conceived as a series of stacked windows that connect to the sequence of spaces between Kitchen/Stair/back door and void over. They provide a shopfront like transparency to the interior when viewed from the pool, and terminate in a return skylight at the first floor. 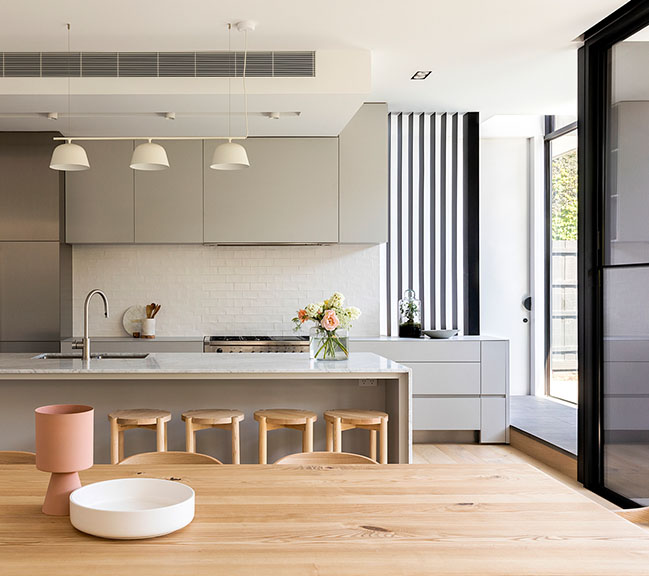 The underlying principle was to create a place of calm – and a refuge away from a bustling neighborhood. Modern volumes and finish, complementary and well paired form, and an immediacy of relationship to water contribute to the creation of a home sanctuary. 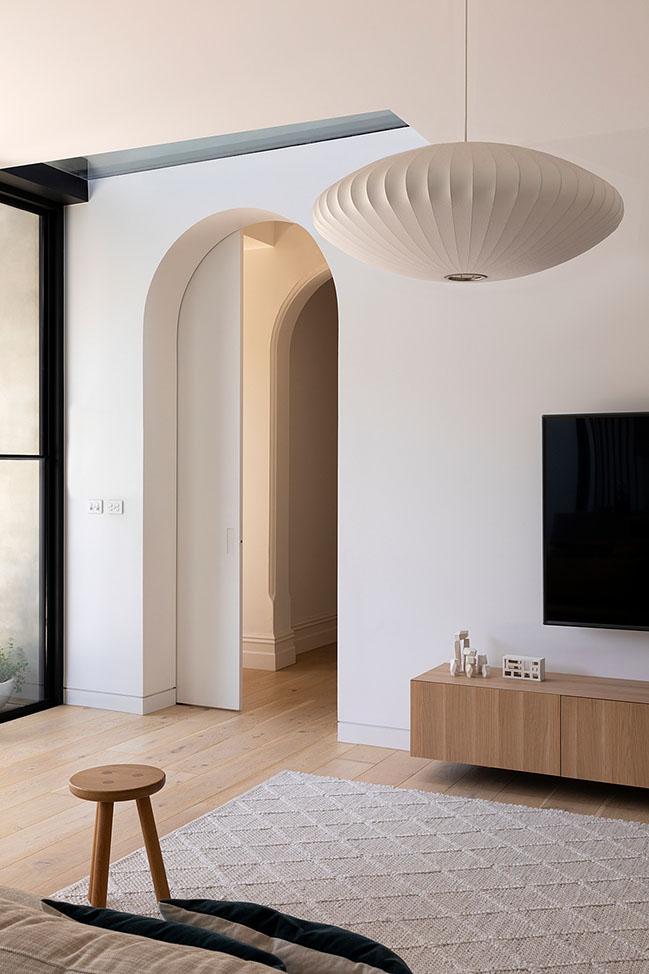 The contribution of the builder, Alastair Hewitt from AJ Hewitt Construction as a fellow collaborator contributed to the timely and effective delivery of the project to the client. His recognition of the design intent of the architecture and architectural detailing was integral to the process, as were his valued suggestions and consideration of construction detail. 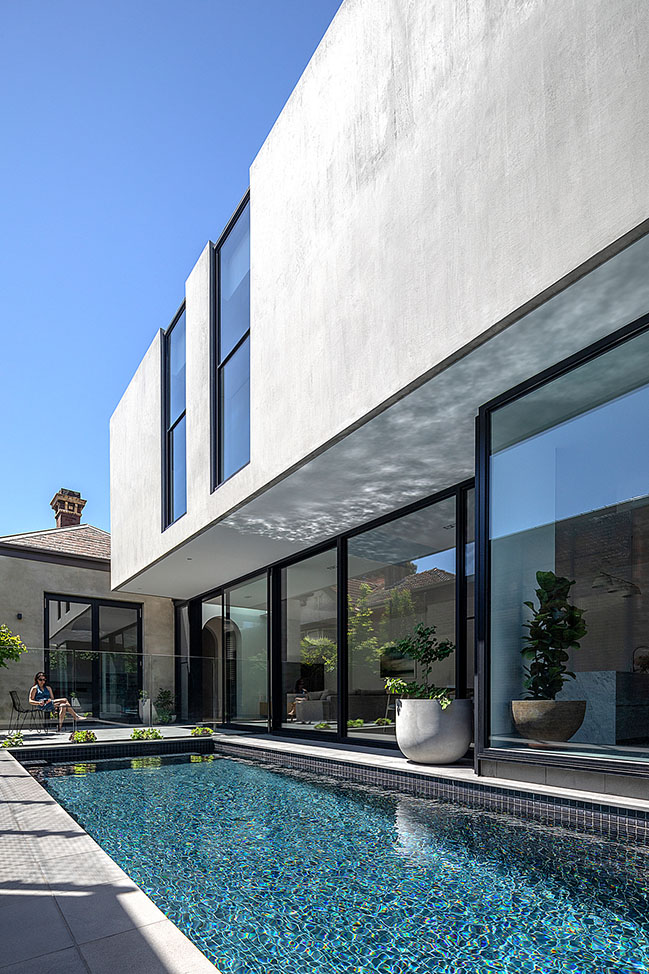 The design of the By the Pool House has enabled the client to inhabit a space that is removed from its busy street frontage and yet is engaged with its private courtyard context. The seamless connection of the added informal living areas with the courtyard and pool have contributed to the sociability of the house, allowing for extended family gatherings that readily flow from interior to exterior areas. 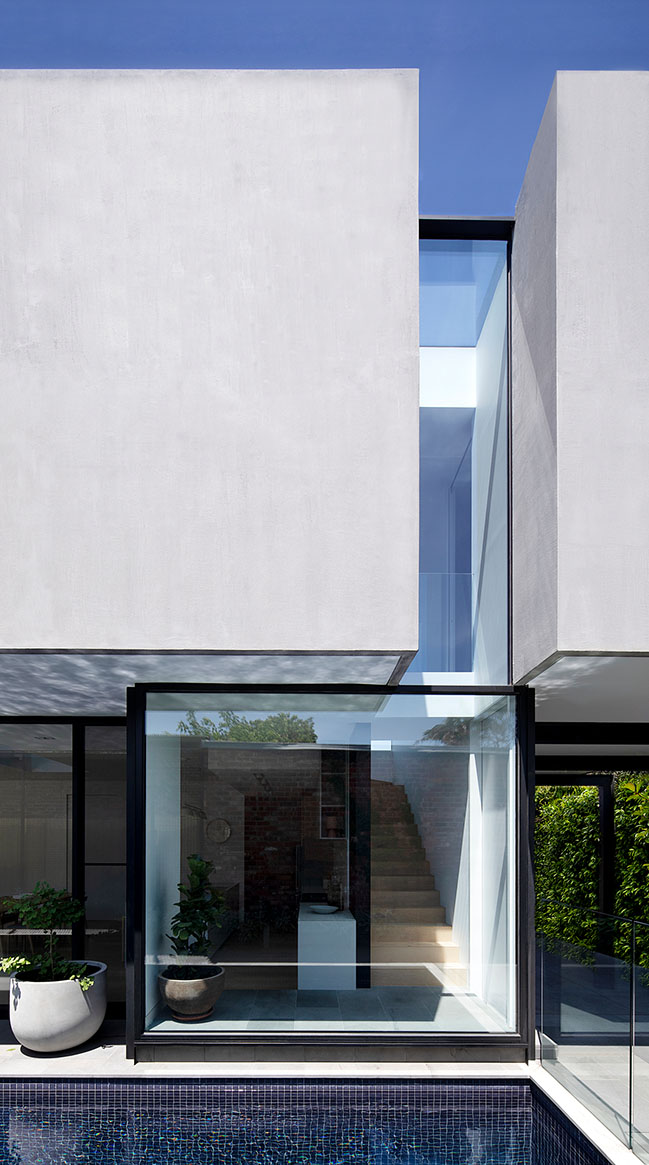 The existing Victorian house had been added to in the 1980’s and the resultant spaces did not address the north orientation nor engage with the outdoor space. The rear of the house was demolished to make way for an informal Living, Meals area and Kitchen that would engage with the pool and courtyard and maximize the north orientation. Similarly, the first floor was configured to afford views down into these private outdoor spaces from the circulation spaces. The new built form is set distinctly apart from the existing recognizing a clear transition from new to old. The new minimal archway between the existing hall and the new spaces reinforces this idea as it mirrors the form of existing Victorian arches whilst heralding the contemporary spaces beyond. 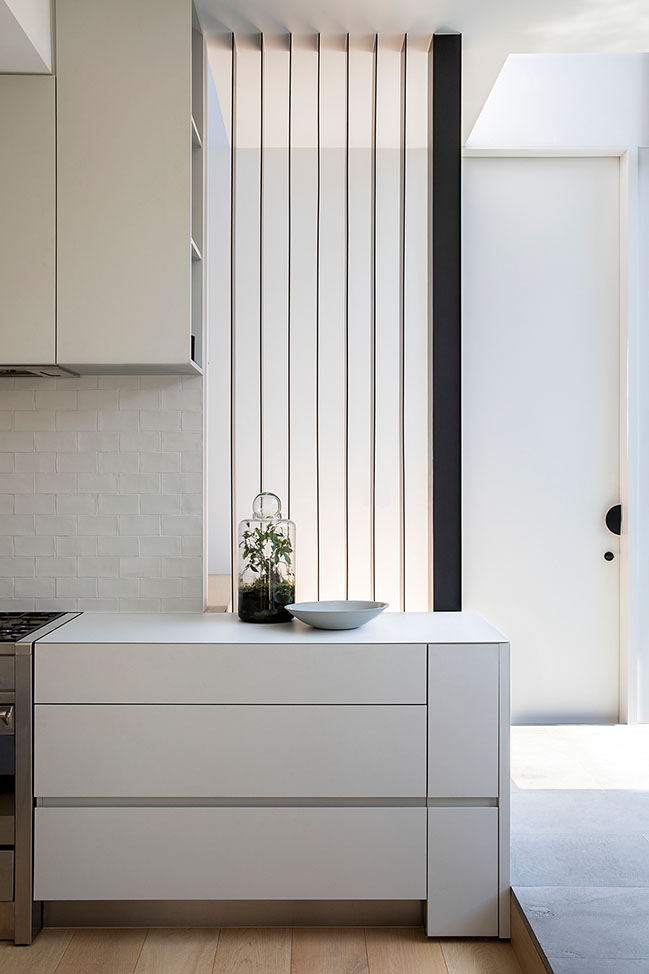 Integral to the client’s brief was the engagement of new living spaces to a pool with the living spaces and to also maximize the dialogue of house to courtyard space. Channeling of views into these spaces while maintaining a sense of privacy was also important. These aspects of the brief were functionally achieved by the partial demolition of the existing structure to make way for a full-length volume for the kitchen and informal living/dining areas which have a direct relationship with the pool and courtyard and north light. 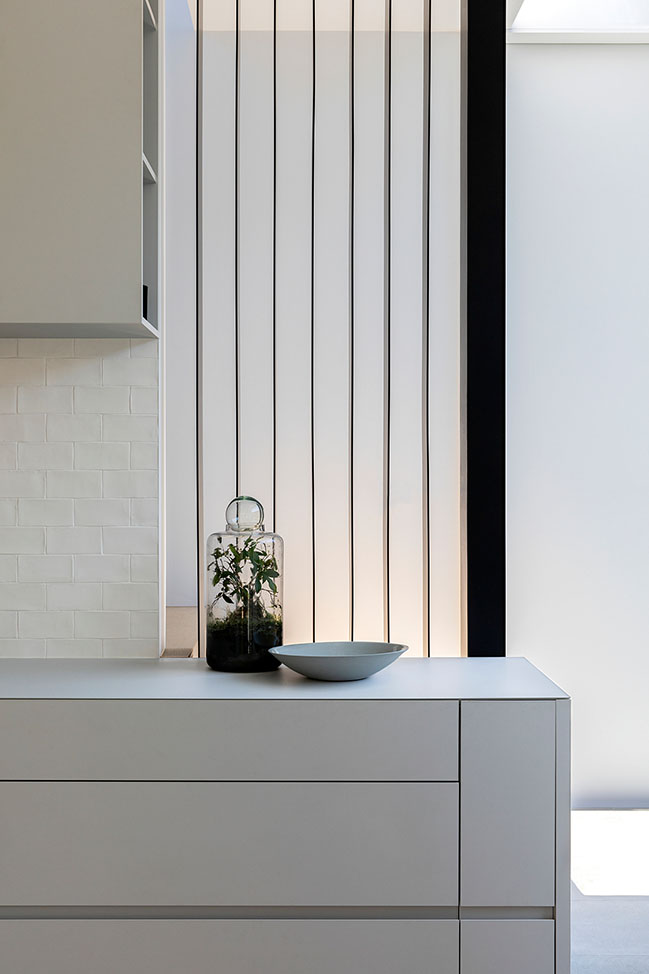 The resultant simple rectangular floor plate was a cost-effective way of achieving the required spaces whilst acknowledging new built form and providing some drama through the use of voids, double height spaces and skylights to the volume of the ground and first floor. The relationship of the pool to the house is the hero statement and its contribution of reflected light and drama to the interior volumes is significant. 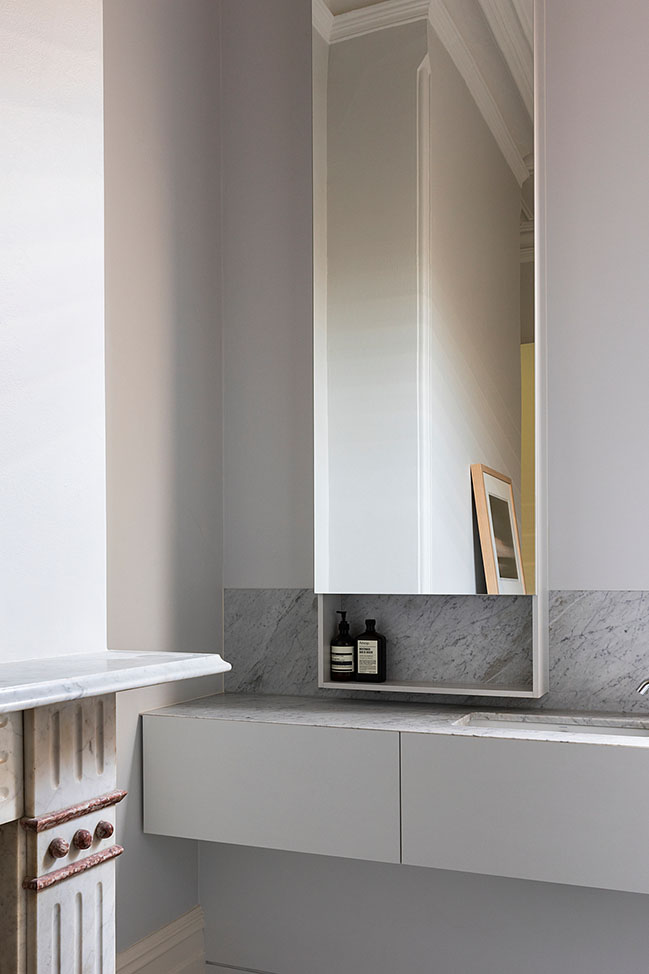 YOU MAY ALSO LIKE: Senses, a Nature-Embedded Pool-House by Wael Farran Studio 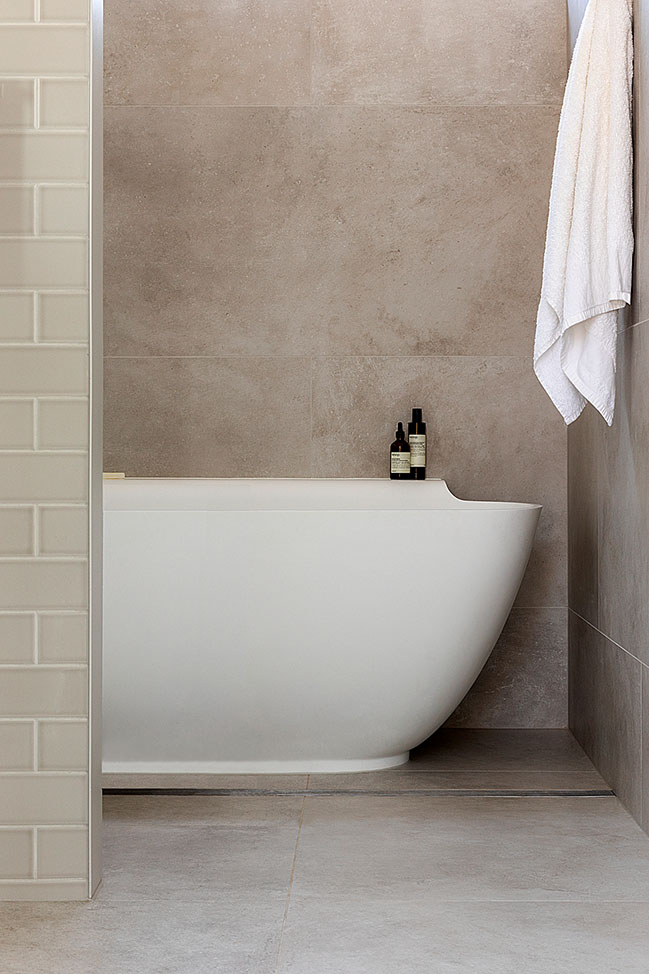 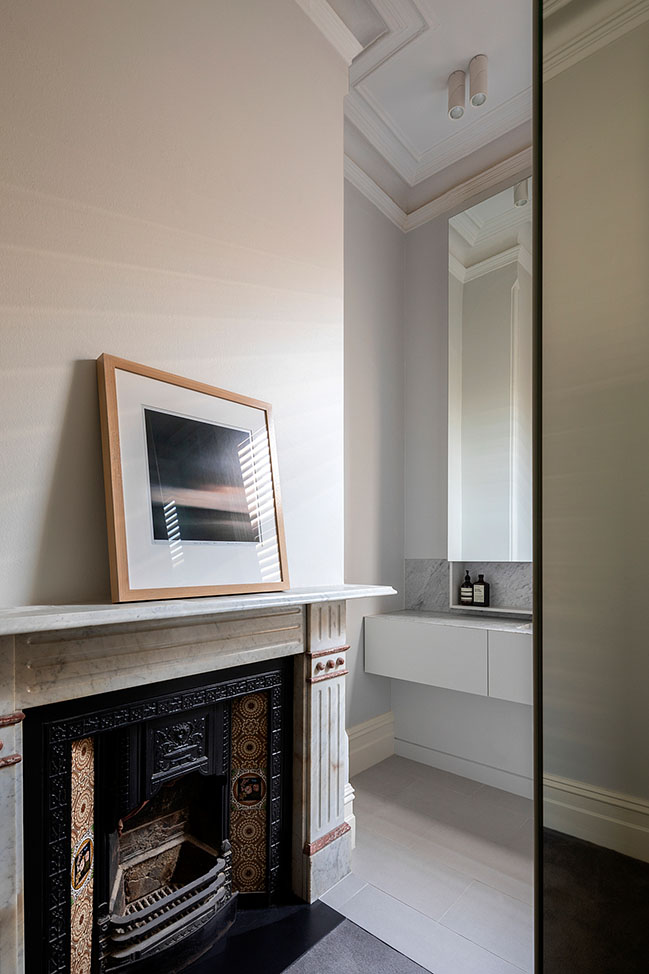 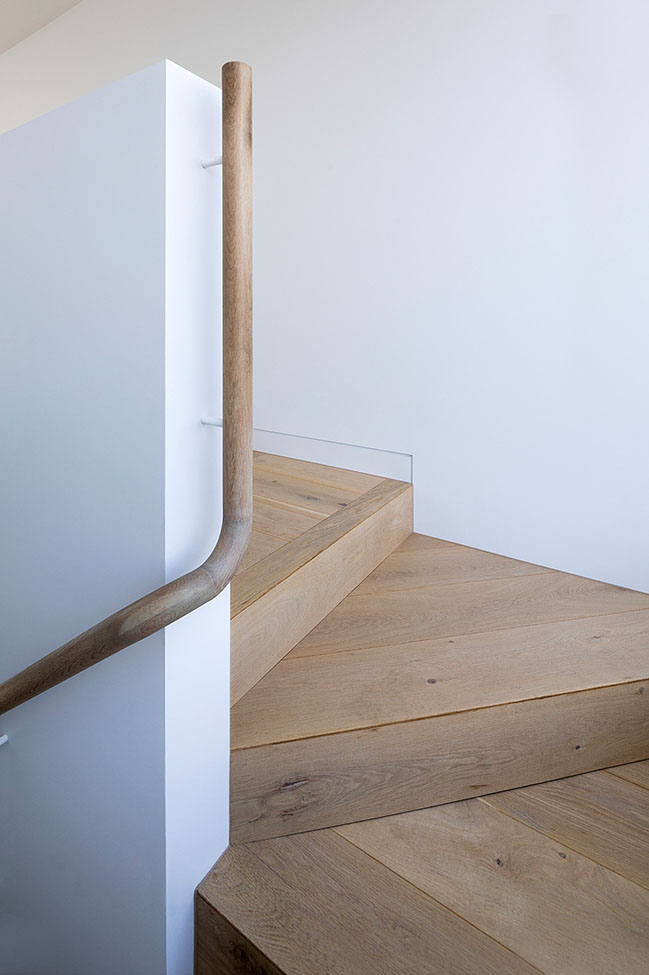 YOU MAY ALSO LIKE: Pool house by Stelle Lomont Rouhani Architects 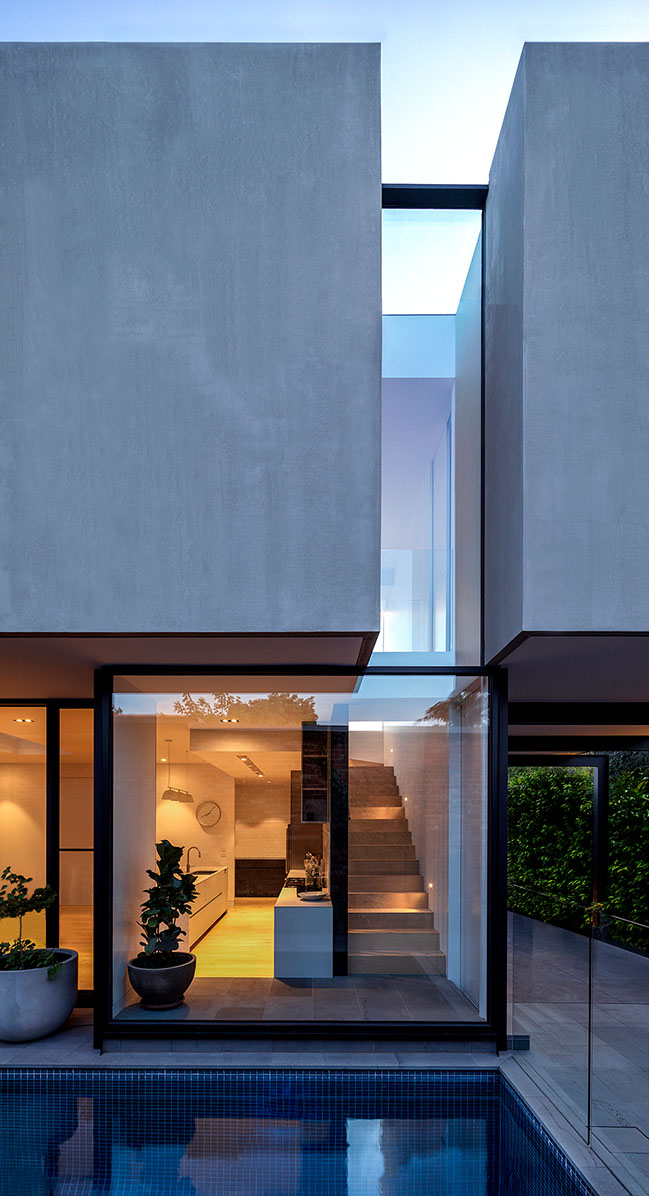 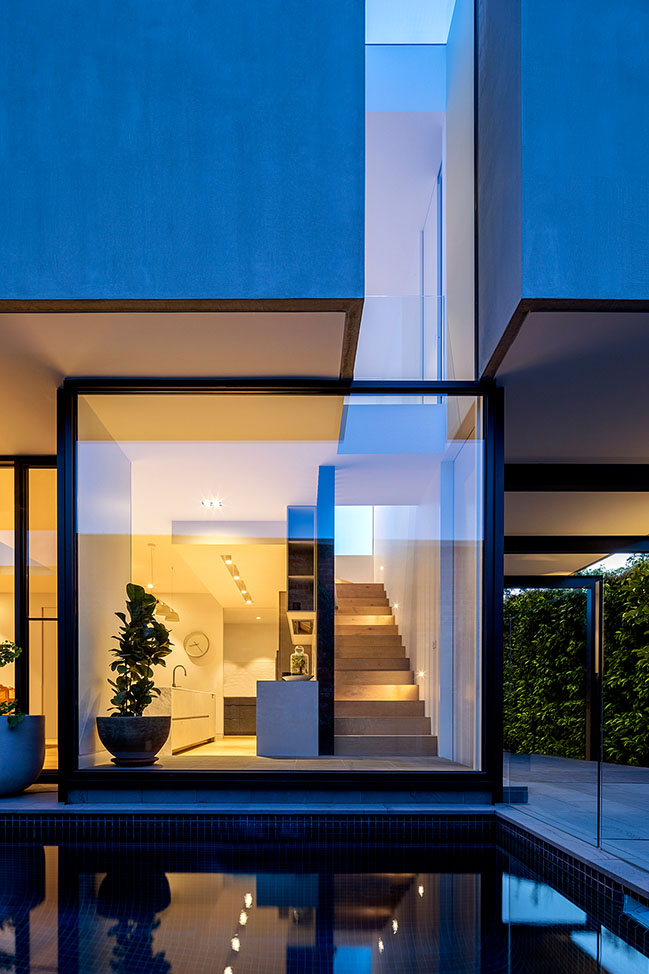 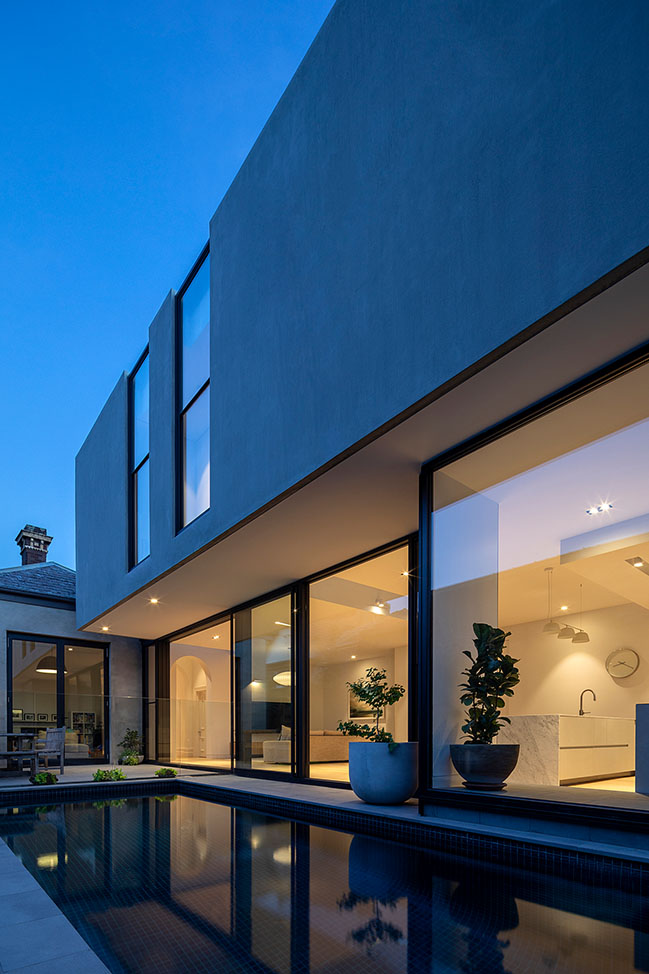 YOU MAY ALSO LIKE: Cable House in Melbourne by Tom Robertson Architects 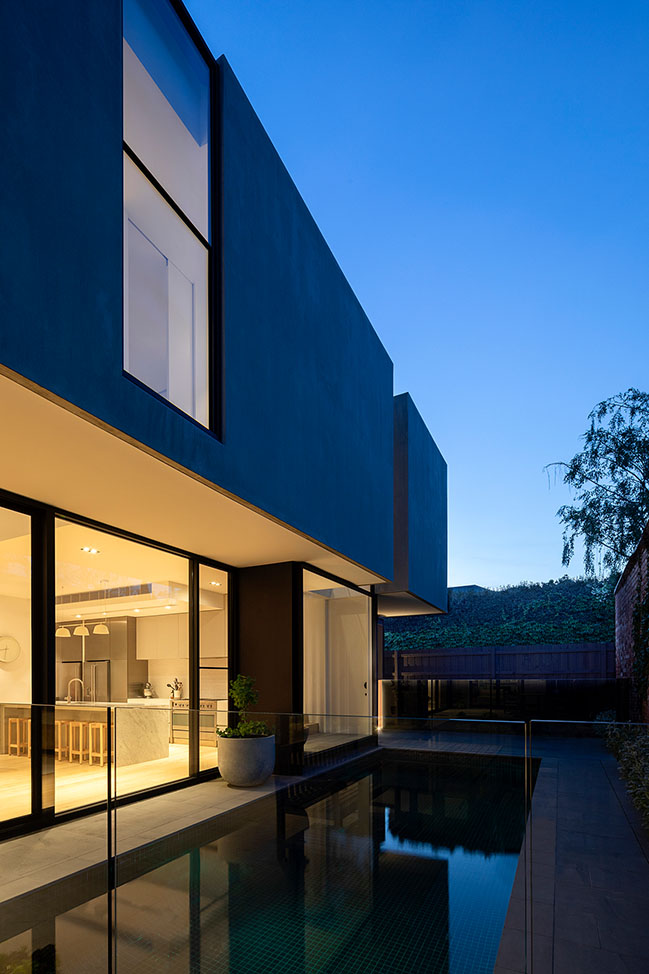 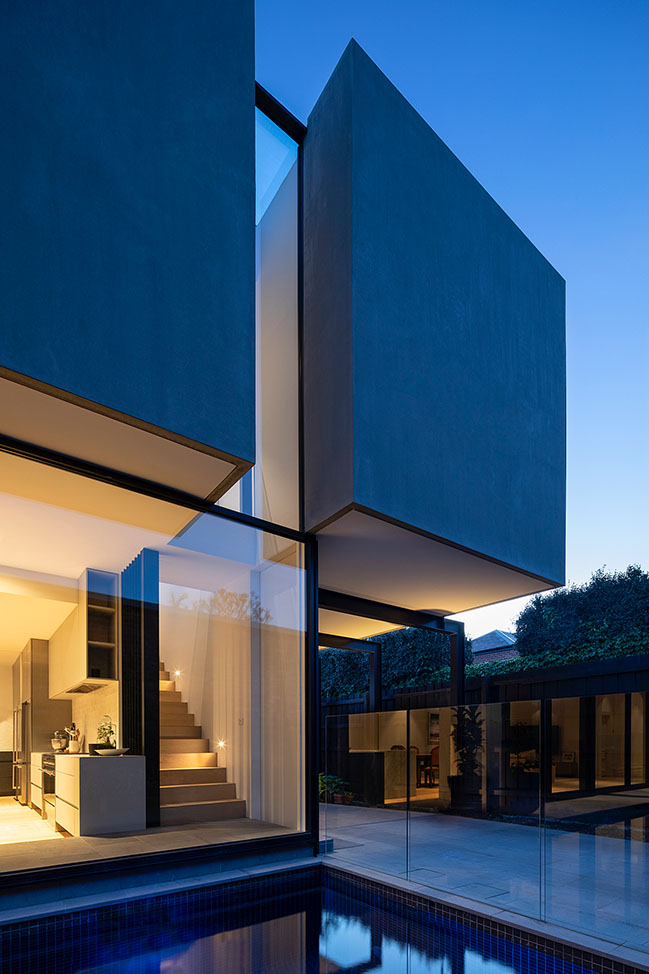 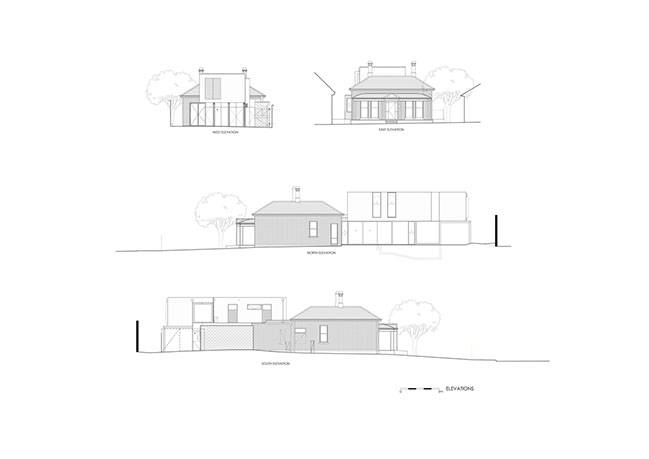 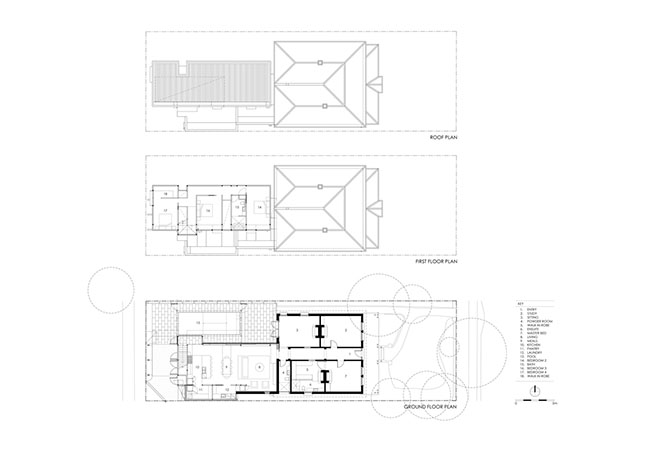