The concept designs, developed by lead architects Diller Scofidio + Renfro, demonstrate the potential to deliver this landmark new building on the current Museum of London site. 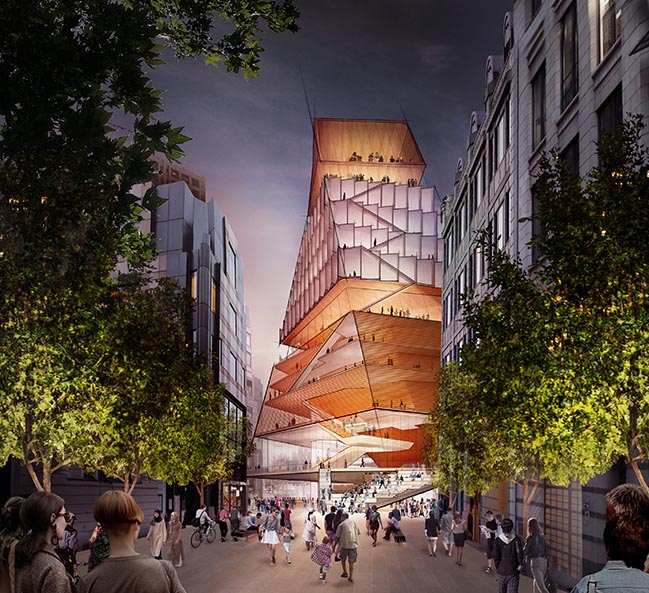 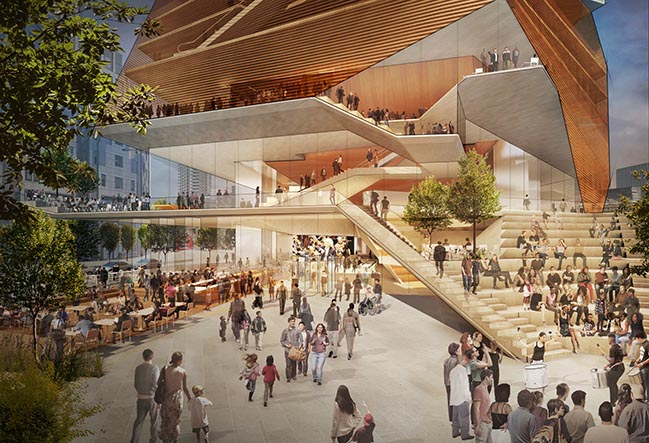 From the architect: The Barbican, London Symphony Orchestra and Guildhall School of Music & Drama have today released the first concept designs for their project to create a world class Centre for Music in London, as part of a progress update on their plans for the proposed new building. This update follows the recent news that the City of London Corporation has backed the next phase of work by providing £2.49 million for the three partners to undertake further design development, and to progress fundraising, business modelling and capital funding plans.

The Centre for Music would be a world-class venue for performance and education across all musical genres, harnessing the power of three internationally recognised cultural organisations - the Barbican, LSO and Guildhall School - to inspire a new generation with a love of music. The Centre would include a world class concert hall and superb spaces for performance, education and rehearsal. It would, above all, be a place for people of all ages and backgrounds to experience the joy of making-music first hand.

Elizabeth Diller, Founding Partner, Diller Scofidio + Renfro, said: “We want to unlock the urban potential of the Centre for Music's site at the southern tip of the Barbican by reclaiming the roundabout for the public realm, where the car’s isolating effects are keenly felt today. A vital public space seamlessly connects to the foyer and extends a welcome to everyone, with or without a performance ticket."

“The foyer would be abuzz day and night, filled with activity and glimpses into the inner life of the Hall. We imagine a concert hall for the 21st century that embraces both a bespoke and a loose fit approach: tailored for exceptional symphonic sound, yet agile enough to accommodate creative work across disciplines and genres.”

Alongside creating an outstanding new building for London and the UK, the designs propose reimagining and transforming the layout and public realm of the current Museum of London site, creating open, welcoming and traffic free public spaces, while also linking to the Barbican Estate’s Highwalk network.

The proposed Centre for Music site, which has been made available in principle by the City of London Corporation, sits on a key cultural axis in the capital, linking north from Tate Modern, the Millennium Bridge and St Paul’s Cathedral and between two major new Elizabeth Line stations. The realisation of Diller Scofidio + Renfro’s concept designs would create an iconic new gateway to the City of London’s emerging Culture Mile, drawing visitors into an area that is set to be transformed over the next decade and beyond through new transport hubs, outdoor programming and major enhancements to streets and wider public realm that link the area’s existing and planned world-class cultural destinations. 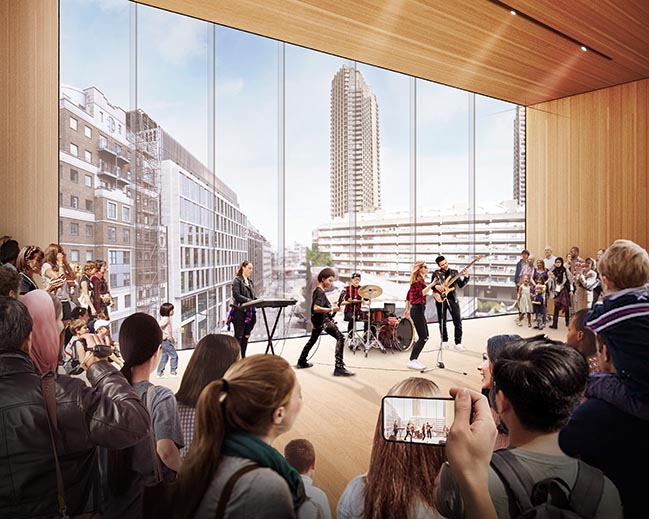 Catherine McGuinness, Policy Chair, City of London Corporation, said: “The proposed Centre for Music would be a landmark building in the City’s emerging Culture Mile, and arguably become regarded as the envy of the international arts, music and educational community.

“As a major funder of heritage and cultural activities in the UK, the City of London Corporation is proud to support these bold and ambitious plans, which have been brought so vividly to life in these initial designs by Diller Scofidio + Renfro.

“Visually breathtakingly, acoustically perfect, and with a stated commitment to being totally inclusive, the Centre for Music would bring together outstanding performers and diverse audiences.

“It is my sincere hope that it would attract generous support from businesses in the Square Mile and beyond. That is vital to its success.”

Current estimates for the cost of the core Centre for Music elements of the building are £288 million in today’s prices. Above these core elements are a series of commercial spaces that will support the construction and running costs of the building, enabling it to operate without ongoing public subsidy.

The Centre would be run by the Barbican, enabling the arts centre to significantly expand its international programme across all genres. It would be the home of the London Symphony Orchestra and the base for the Guildhall School of Music & Drama’s new Institute for Social Impact.

The Centre would also allow the Barbican, LSO and Guildhall School to build upon and significantly increase their current learning and discovery programmes, with the ambition of delivering high quality music experiences for school children and communities across London. Digital technology would be fully integrated into the building’s design and infrastructure, enabling music and education activity delivered in the Centre to be distributed to a global audience. 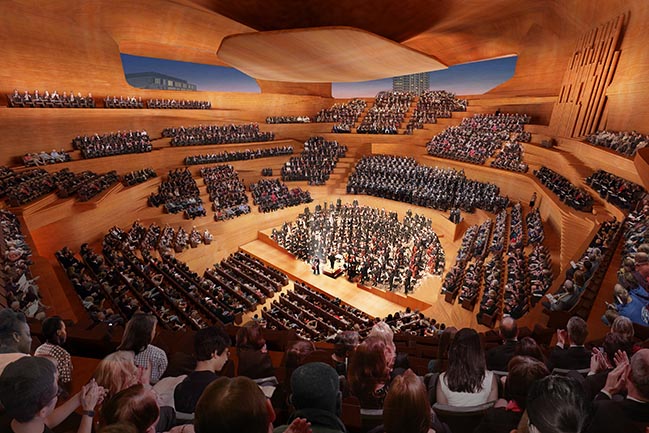 Sir Nicholas Kenyon, Managing Director, Barbican; Kathryn McDowell CBE, Managing Director, London Symphony Orchestra and Lynne Williams, Principal, Guildhall School of Music & Drama said: “The Centre for Music would enhance the status of London as one of the world’s leading cultural capitals, delivering major new benefits to the city and the UK’s musical life, educational offer and international reputation. We believe the project would have the equivalent impact on music in the capital as the opening of Tate Modern had on contemporary art almost two decades ago.

“The shared ambition and experience of the project partners, the availability of a key site and the support of the City of London Corporation have all aligned to create a once in a generation opportunity to transform how music is experienced in London and beyond.” 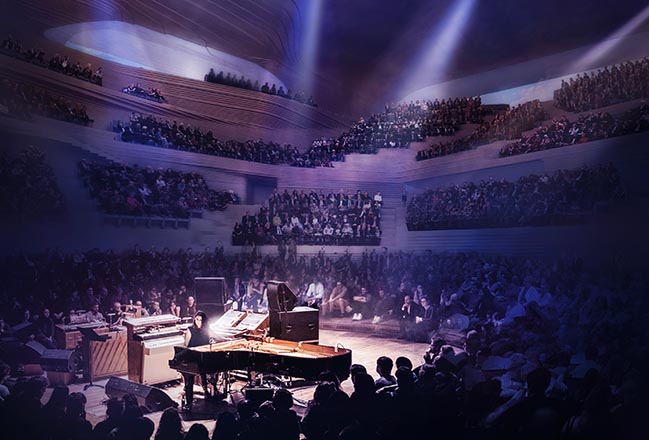 Sir Simon Rattle, Music Director, London Symphony Orchestra and Artist-in-Association, Barbican and Guildhall School of Music & Drama said: “We believe in music. We believe in London. We believe in the power of music to transform people’s lives. And more importantly than anything else, we believe it is for everybody. Talent for music, love for music has never been anything to do with the ability to play, to hear or learn. It is every child’s birthright.

“The idea that there can be a new cultural centre in London, in Culture Mile, and that in the middle of it, a truly great international, modern concert hall of our time, equipped for everything of this age, is very exciting. A sign of London as a dynamic cultural city, at a time when we are going to need this more and more.”

The next phase of work on the project is expected to take approximately one year to complete. 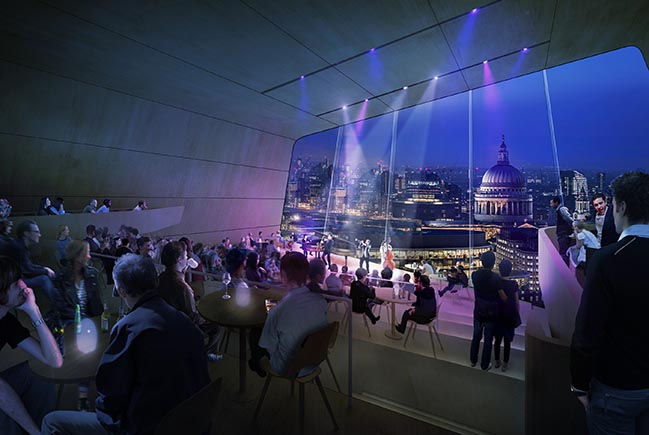