CRA-Carlo Ratti Associati, together with global energy company Eni, has developed an architectural structure made of mushrooms, installed in the center of Milan for Design Week 2019. Grown from soil over the past six weeks – and to be returned to the soil at the end of the month in a fully circular manner – the project is composed of a series of arches, made from a record 1-kilometer-long mycelium. 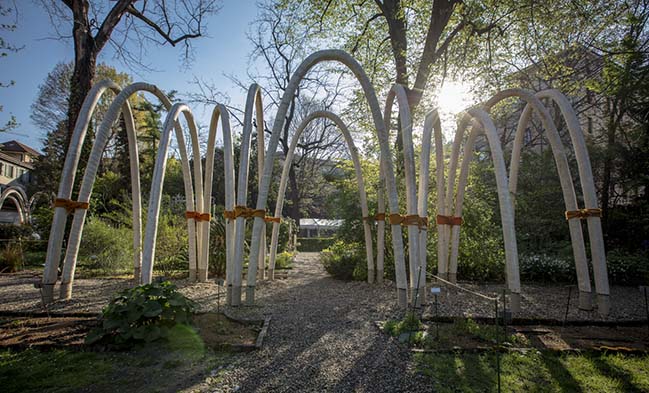 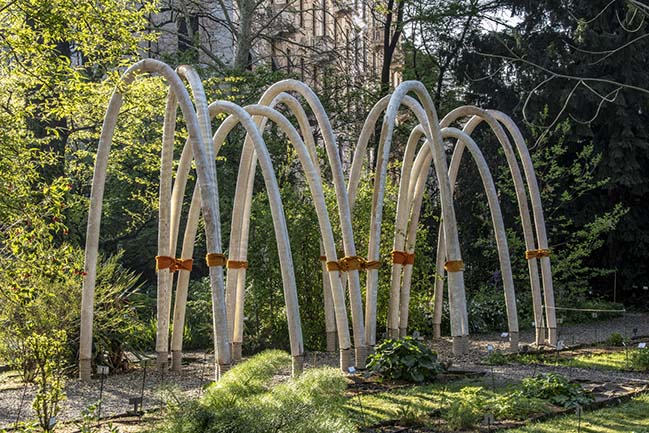 Project's description: The installation, called “The Circular Garden,” was grown from soil over the past six weeks – and will be returned to the soil at the end of the month. It is composed of a series of arches, adding up to a record 1-kilometer-long mycelium, and experiments with sustainable structures that can grow organically and then return to nature in a fully circular way. The project will be showcased during Milan’s Fuorisalone at Brera’s Orto Botanico, the city’s botanical garden. The installation, part of the INTERNI Human Spaces exhibition, will be open to the public from April 9th to 19th 2019. 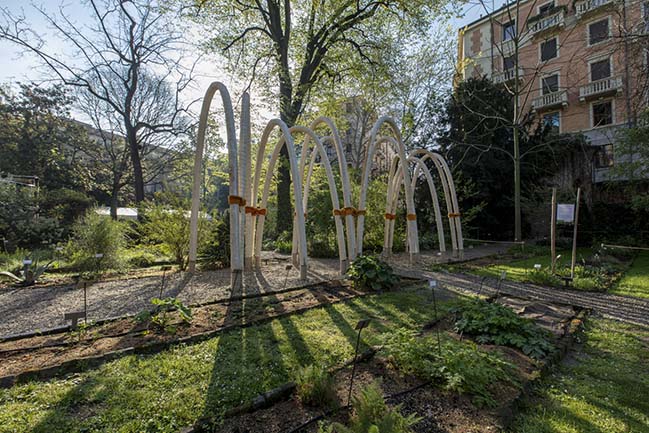 The Circular Garden pushes the boundaries of using mycelium – the fibrous root of mushrooms – in design. In recent years, mycelium has been employed for sustainable packaging and small brick-like objects. The Circular Garden engages with mycelium at the architectural scale – with a series of 60 4-meter-high arches made of mycelium scattered around the Orto Botanico, for a total of 1 kilometer of mushroom. 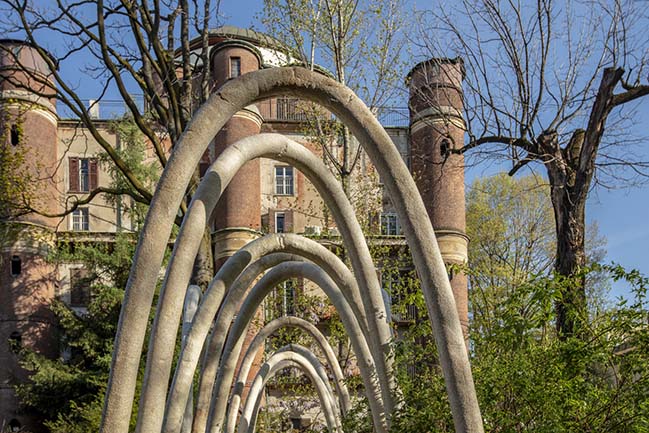 In order to create self-supporting mycelium structures on such a scale, the project takes inspiration from the great Catalan architect Antoni Gaudí. It was he, while designing the Sagrada Familia in Barcelona, who resurrected the “inverted catenary” method pioneered in the 18th-century by polymath Giovanni Poleni. According to this method, the best way to create pure compression structures is to find their form using suspended catenaries and then invert them. The same applies to the Circular Garden, where the catenaries compose a series of four architectural “open rooms” scattered throughout the garden. 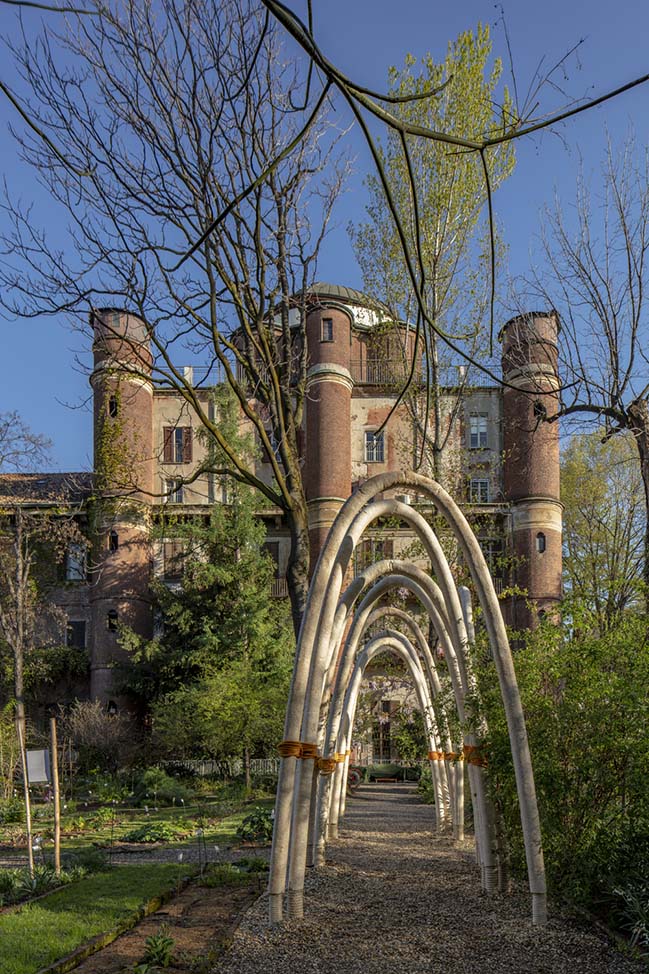 The mycelium was grown in the two months preceding the opening of the Circular Garden with the help of leading experts in the field of mycology – particularly the Dutch Krown.Bio lab. Spores were injected into organic material to start the growth process. In a similarly organic manner, all the mycelium will be shredded at the end of Milan Design Week and go back to the soil, in a circular way. The cycle is similar to what has happened since ancient times in small town or city gardens, through the production of food and the composting of organic waste. 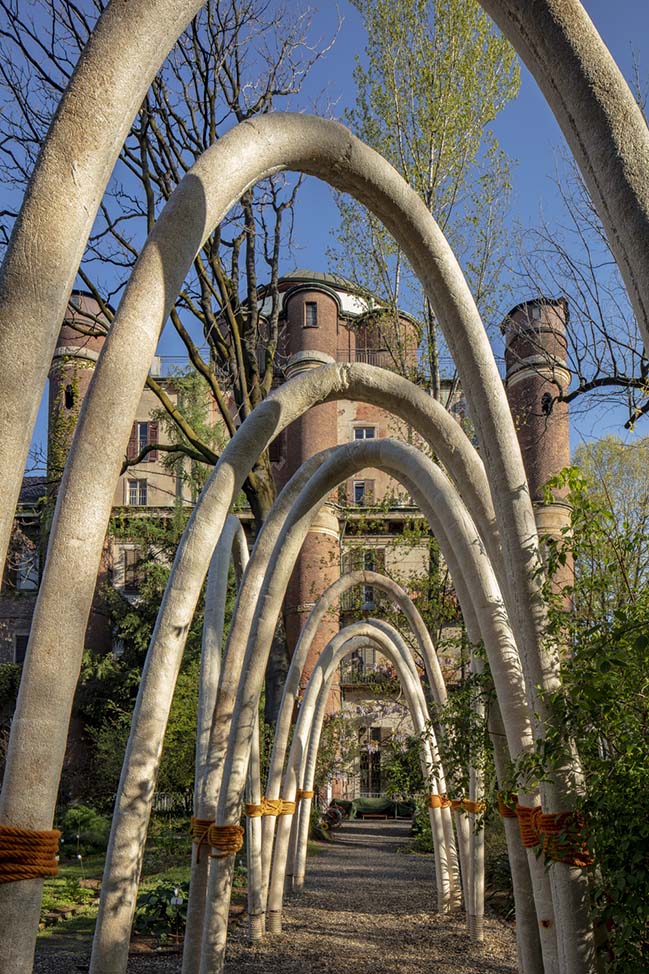 “Nature is a much smarter architect than us,” says Carlo Ratti, founding partner of CRA and director of the MIT Senseable City Lab: “As we continue our collective quest for a more responsive ‘living’ architecture, we will increasingly blur the boundaries between the worlds of the natural and the artificial. What if tomorrow we might be able to program matter to ‘grow a house’ like a plant? Milan’s amazing botanical garden, in the center of the city, seemed the ideal place for such an experiment”. 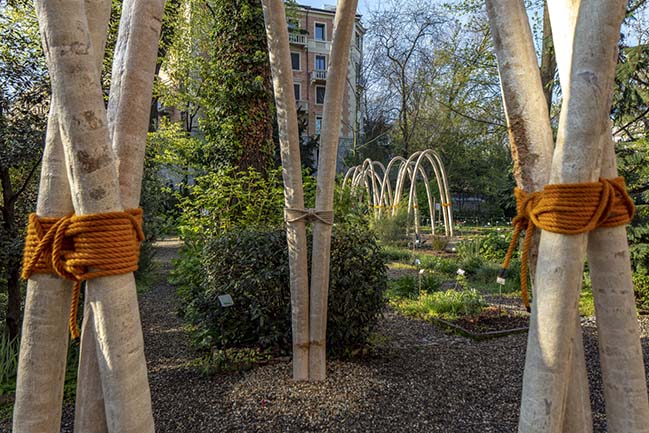 “There’s a whimsical short story written by Italian writer Italo Calvino in the 1960s that tells of the wonder of the urbanite Marcovaldo when he suddenly discovers some mushrooms growing in the middle of the city. During our first visits at the Botanical Garden in Milan, we felt a similar amazement,” comments Saverio Panata, project manager at CRA: “We discovered how many varieties of mushrooms were naturally growing in the garden. After that encounter, we thought that mushrooms, with their adaptability and speed of growth, could become our perfect building material.” 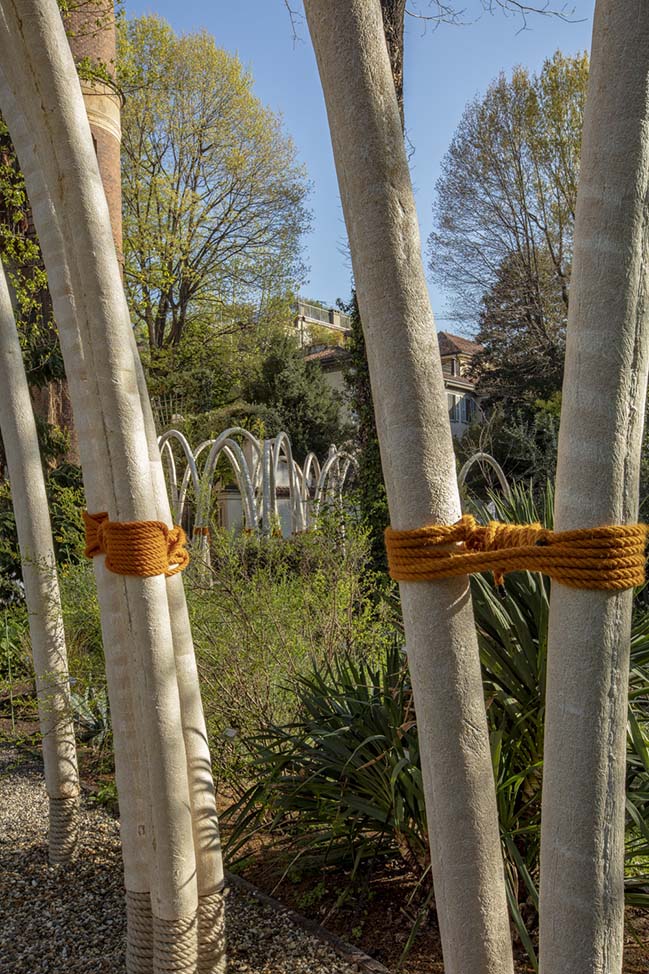 Many pavilions designed for temporary exhibitions and fairs – such as for Milan Design Week – end up generating large amounts of waste. The Circular Garden project will be reused in a circular fashion – mushrooms, ropes and wood chips will go back to the soil and small metal elements will be recycled. “Life is more important than architecture,” Oscar Niemeyer famously said, a dictum that is at the center of this year’s theme at the INTERNI Human Spaces exhibition. “It is certainly about human life – but it is also increasingly about the life of our planet, intended in a holistic way,” adds Ratti. 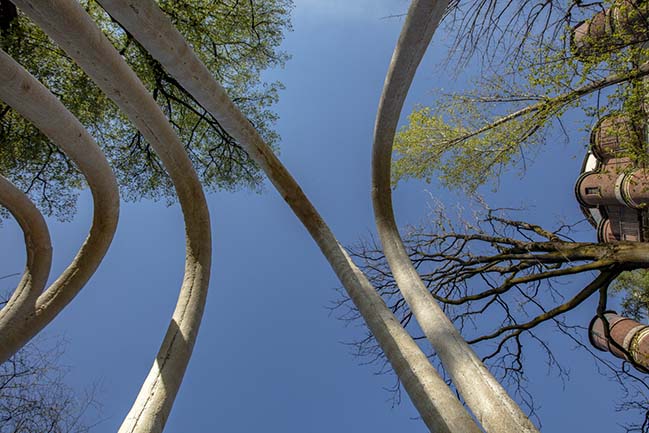 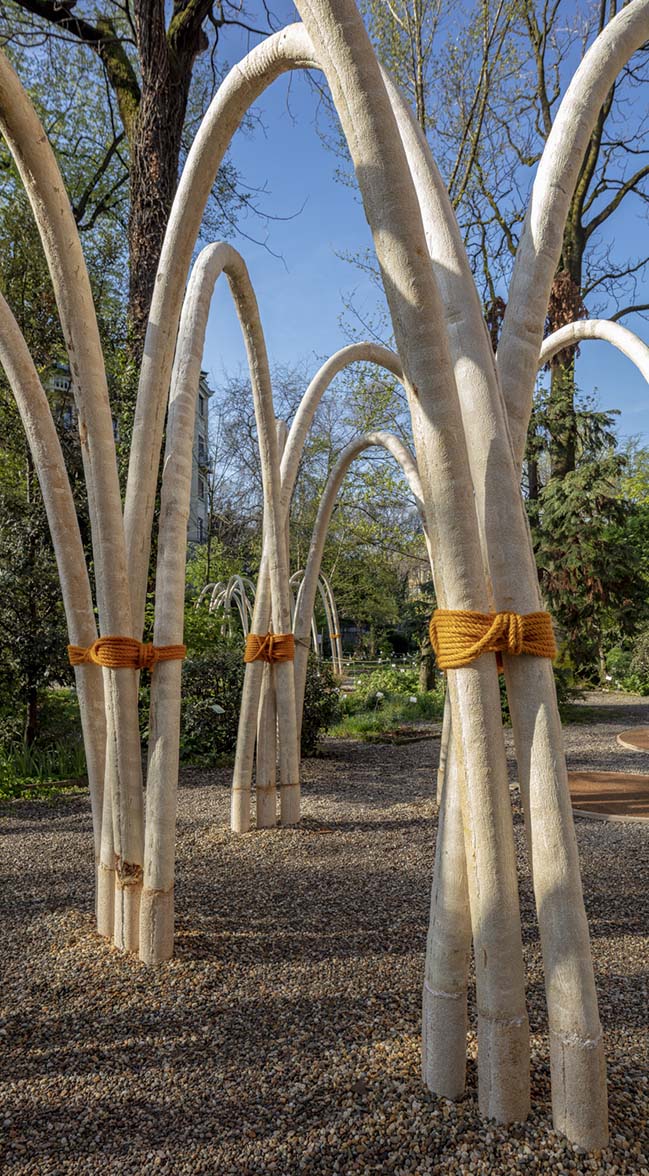 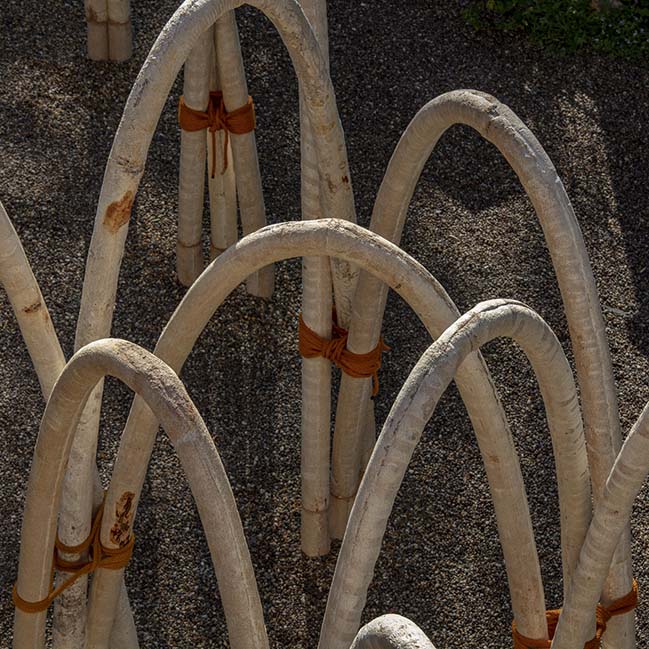 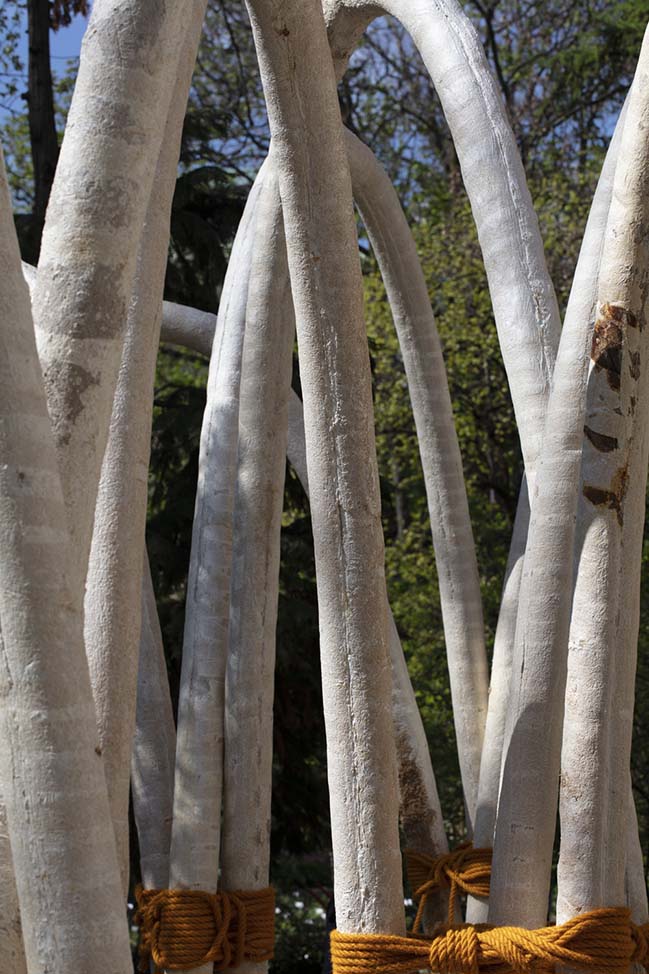 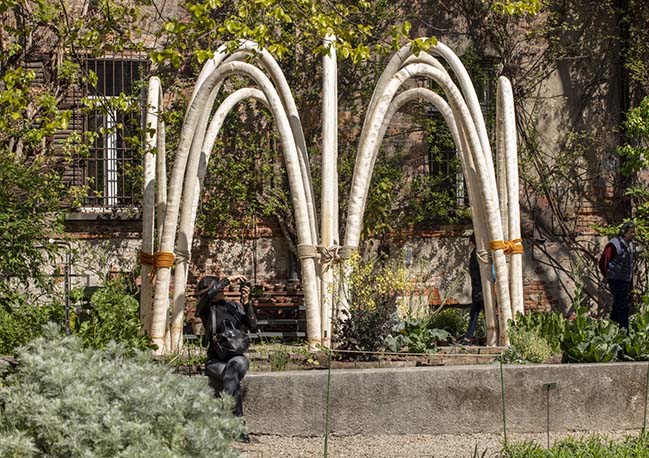 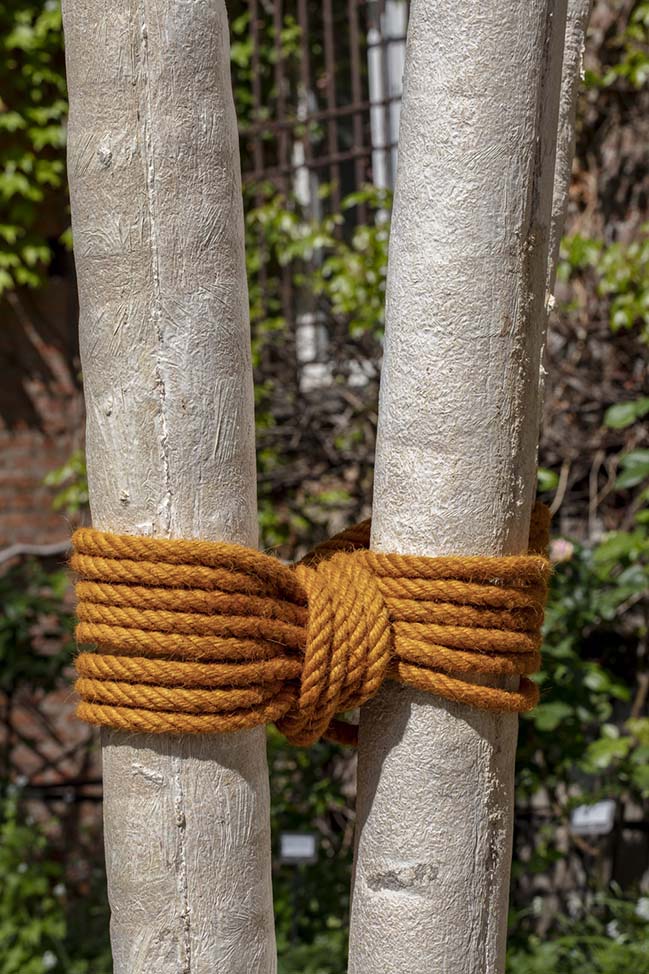 YOU MAY ALSO LIKE: The Italian Pavilion at Expo Dubai 2020 by CRA-Carlo Ratti Associati 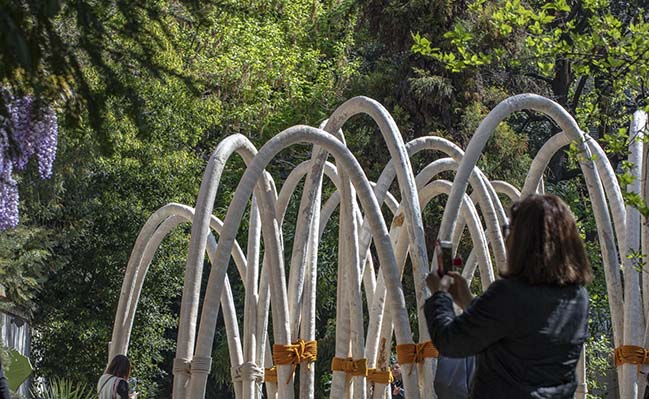 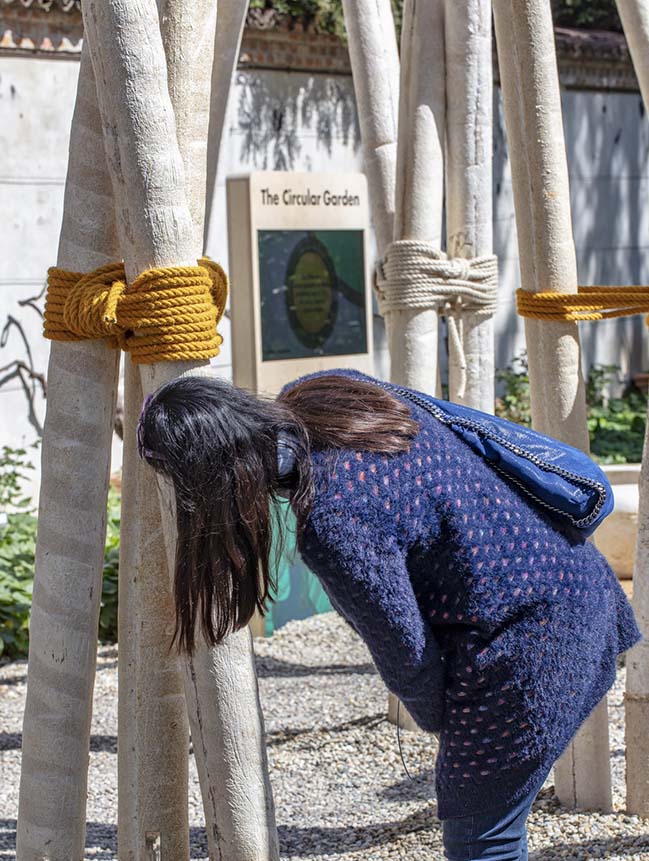 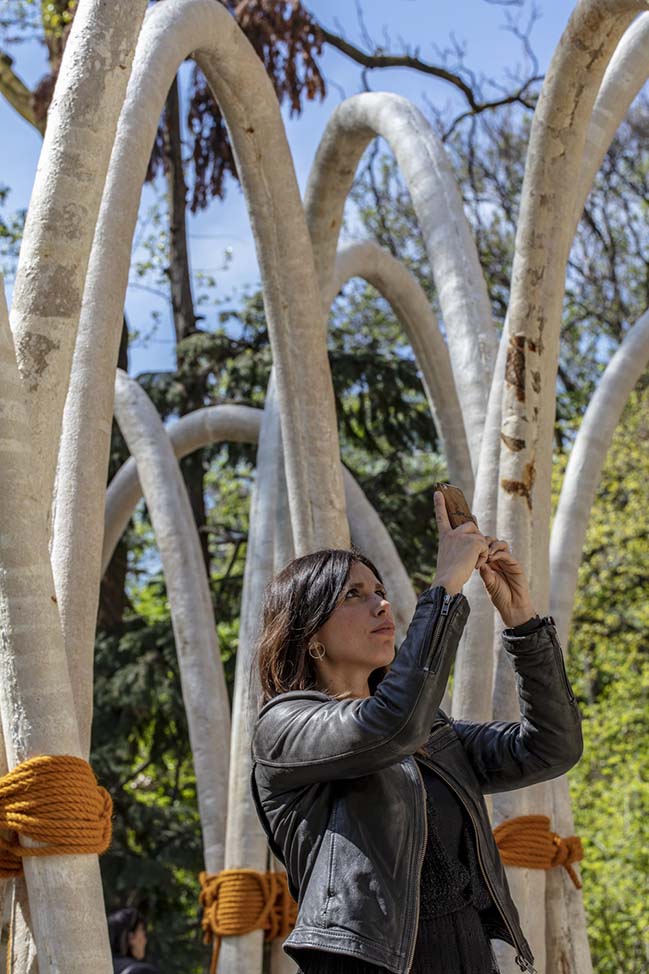 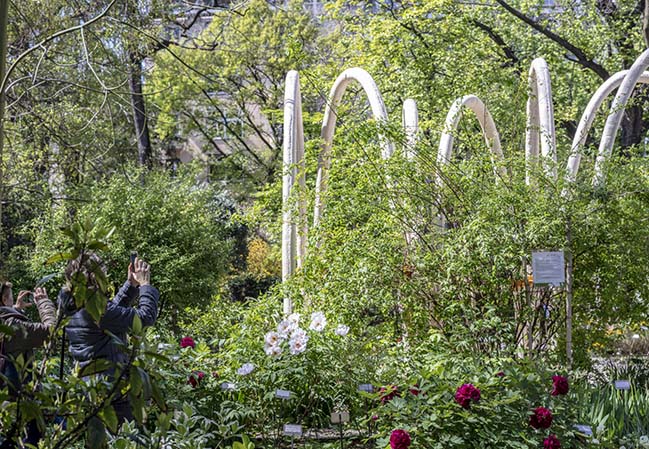 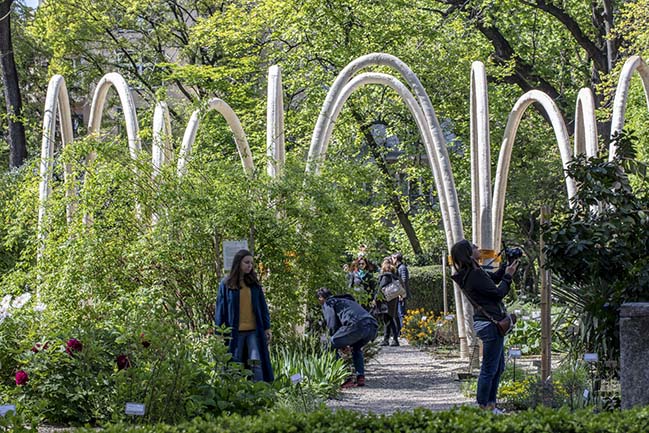 YOU MAY ALSO LIKE: Carlo Ratti to curate 2019 Bi-City Biennale of UrbanismArchitecture (Shenzhen) 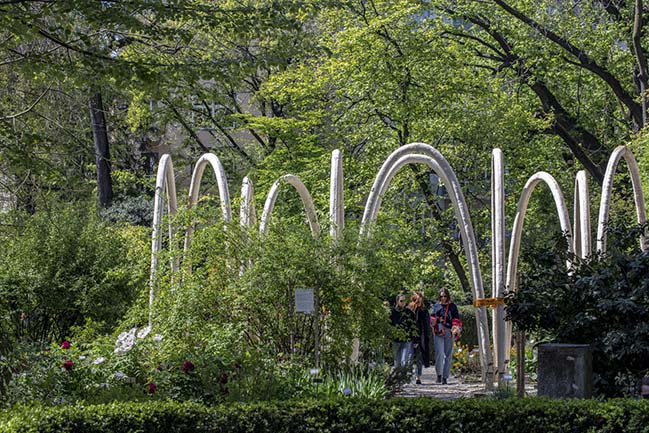 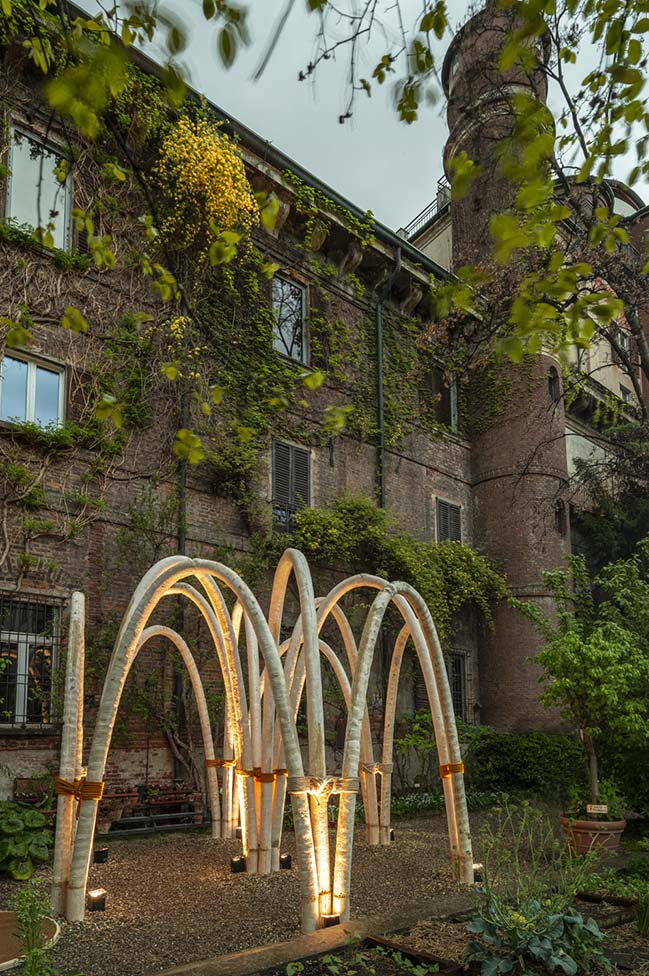 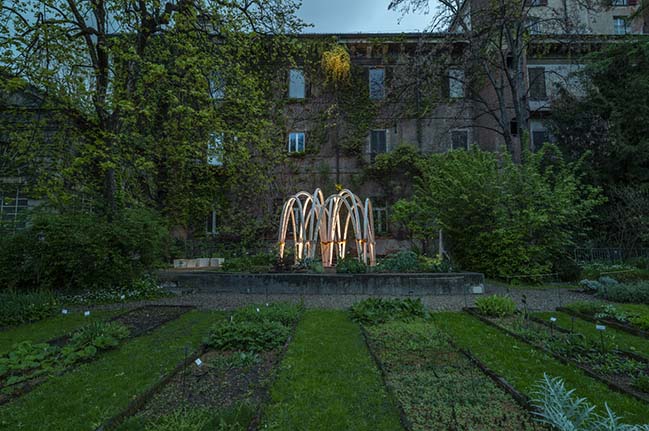 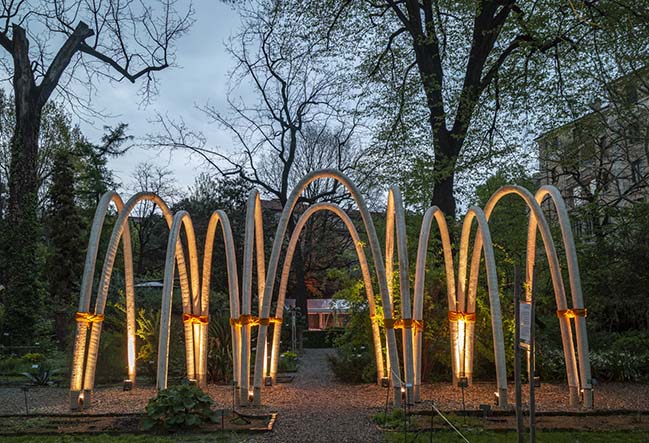 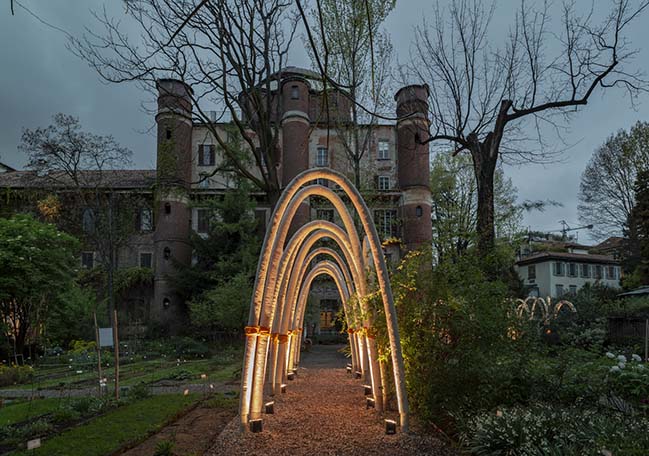 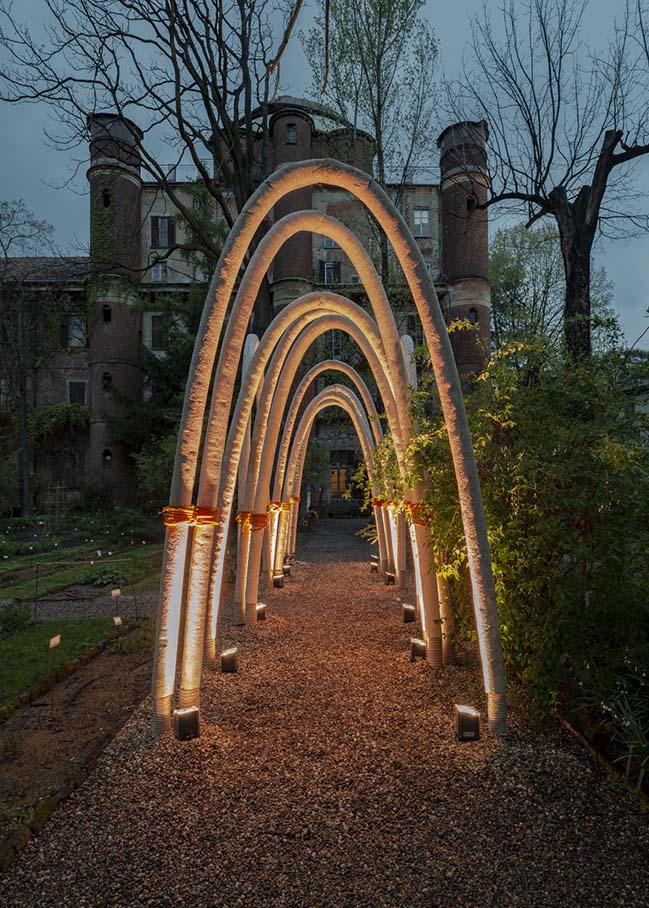 YOU MAY ALSO LIKE: The Greenary by Carlo Ratti Associati 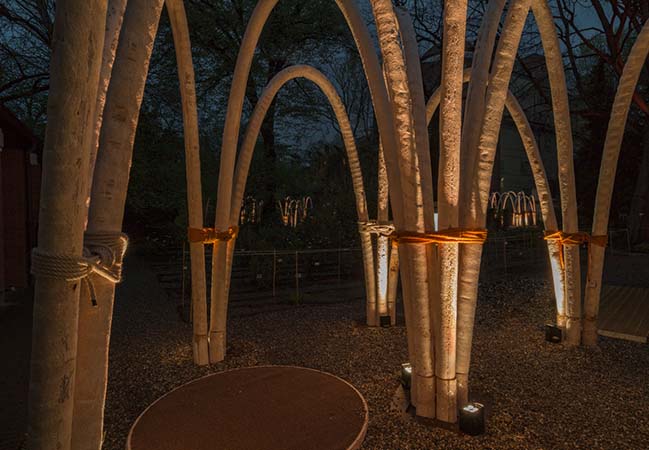 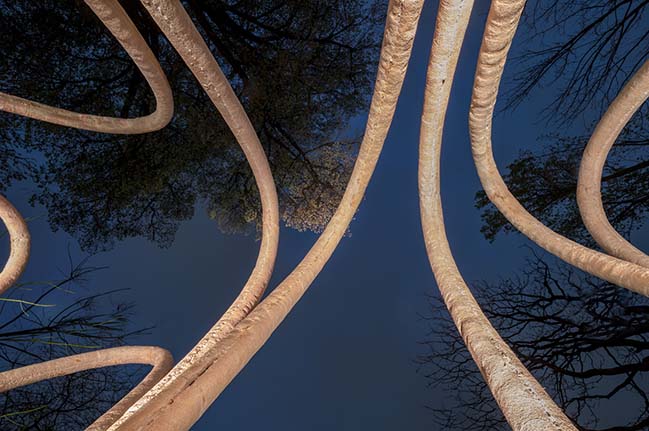 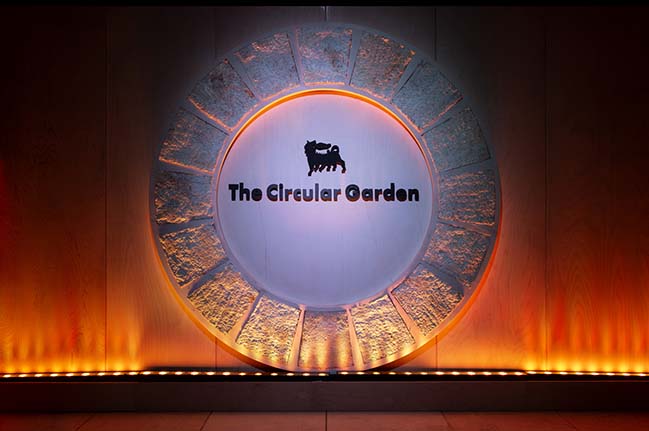 04 / 09 / 2019 Carlo Ratti Associati, together with global energy company Eni, has developed an architectural structure made of mushrooms, installed in the center of Milan for Design Week 2019