Like a mineral, the architecture of the Hillside Rock emerges from interactions with its environment, without attempting to recede into nature. This low-cost single family house is located on a dramatically sloping three-quarter acre site. The clients desired a home that would take advantage of the unique qualities of wooded enclosure and mountainous expanse that the site offered. 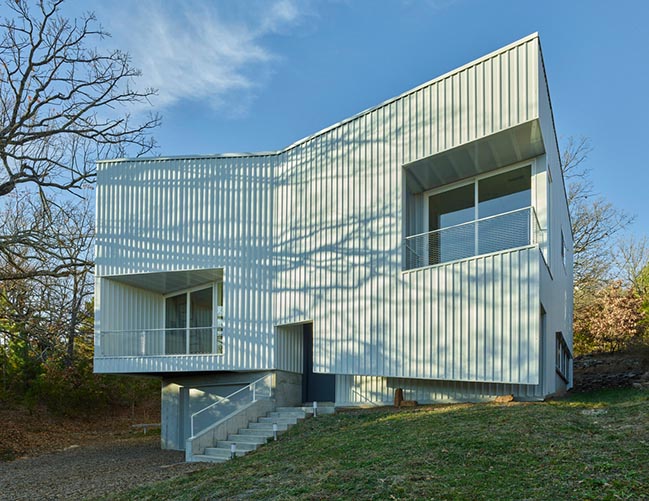 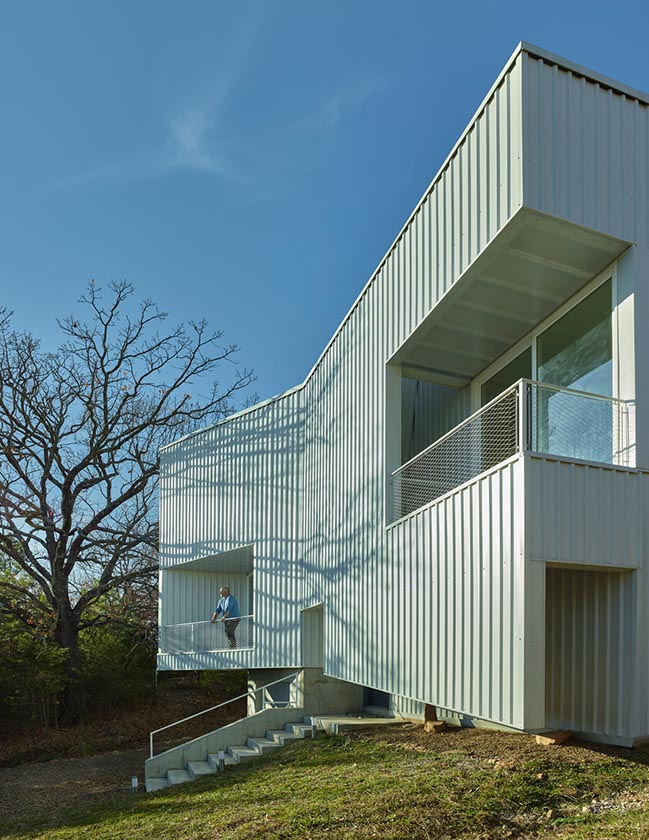 From the architect: On approach, the house appears as an abstract outcropping; a counterpoint to the lush surroundings. The crystalline form is shaped in response to the desire to provide distinct views and experiences from each main living space. Three separate terraces are cut into the otherwise solid volume, each with a different perspective of the surrounding environment. 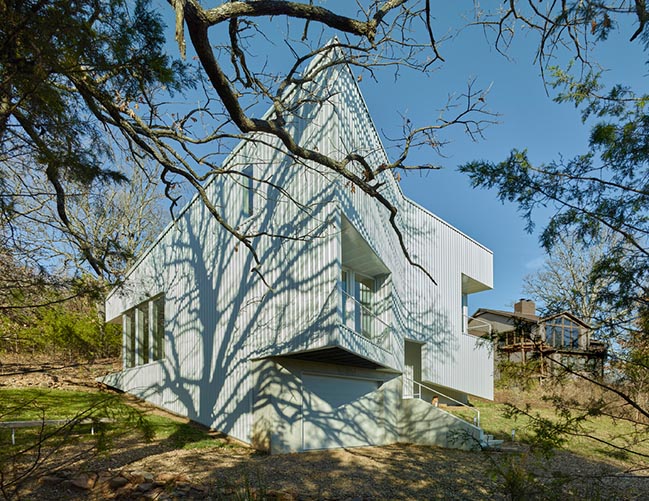 The first terrace, off of the living area, looks through the wooded southern edge of the site, over the historic Mt Sequoyah neighborhood. A terrace off the master bedroom is trained on a southern panoramic view of the Boston Mountains. Adjacent to the kitchen and dining space, a third terrace is nestled within the dense woods, creating a private enclave. 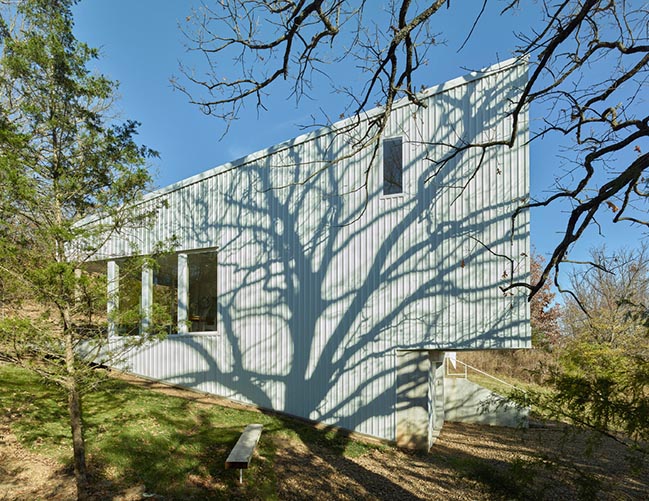 Use of simple corrugated metal on all sides emphasizes the house as a solid mass embedded in the site; like the large sandstone boulders that can be found throughout the property. The white envelope becomes a canvas that catches shadows from the surrounding vegetation, revealing in its surface the complexity of forms that abound on the site, while also subtly registering the changing character of light throughout the day. Instead of scattering small windows indifferently on all sides, the façade’s punctures are choreographed to create more singular connections to the land at different scales. 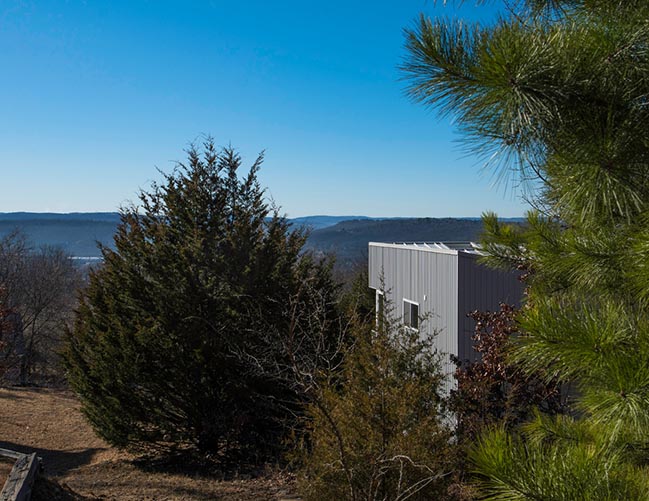 While the overall form and character of the house itself is a projection outwards, a reaching towards the vast expanse of mountains, the entry façade is conceived of as a mask to the private life beyond. As you ascend the front steps it becomes apparent that the house has presented a false front, a peeled layer whose separation from its main body affords a last glimpse of the sky before entering. 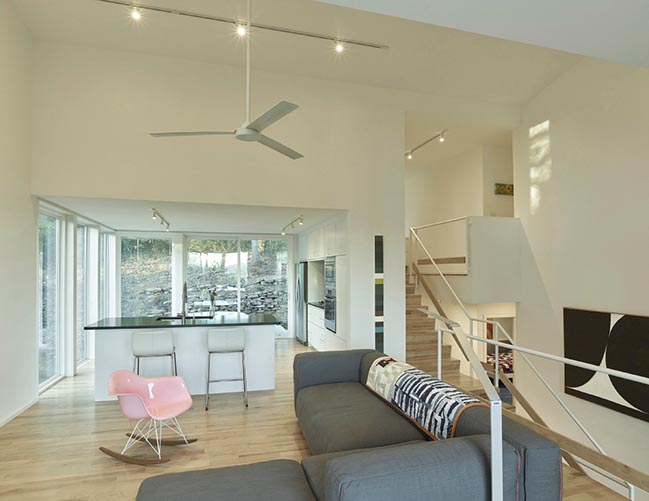 The interior’s split-level organization is tuned to the hillside slope, animating an ever changing section of cascading and nested spaces. A central wooden stair stitches together a spatial section that transitions from a concrete base into white carved volumes whose scale mimics their immediate exterior surroundings, capturing the alternating exposure and enclosure found on the original untouched site. 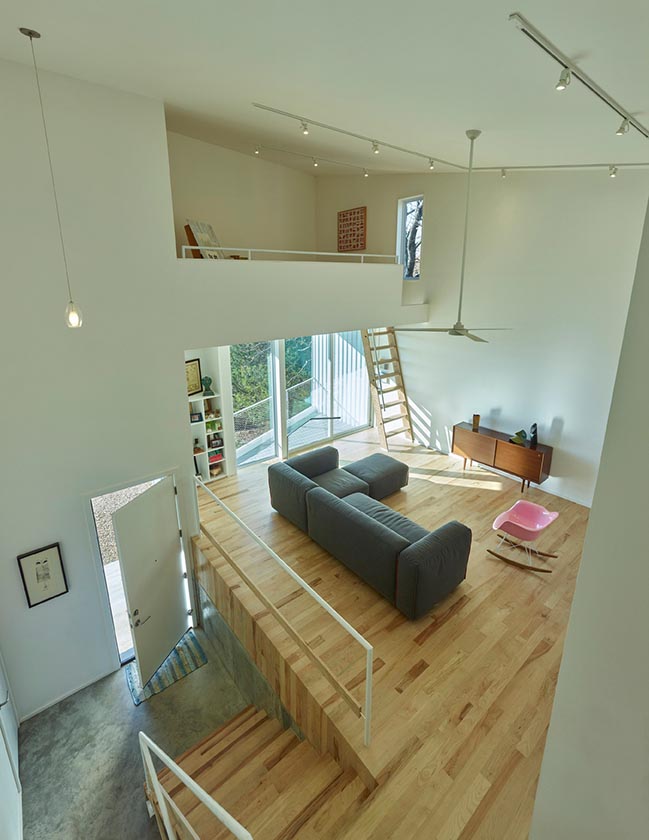 This becomes apparent as you move back and forth between the living space, with its double height ceiling and views through the top of the surrounding tree canopies, and the kitchen, which compresses the interior space as a connection to the low lying woods that surround it. The interior is predominately white, so as not to compete with the beautiful cacophony of exterior colors as they change throughout the seasons.

As the sun goes down the house’s figure inverts, the terraces transform into illuminated figures floating in the hills, and the white exterior falls into darkness. 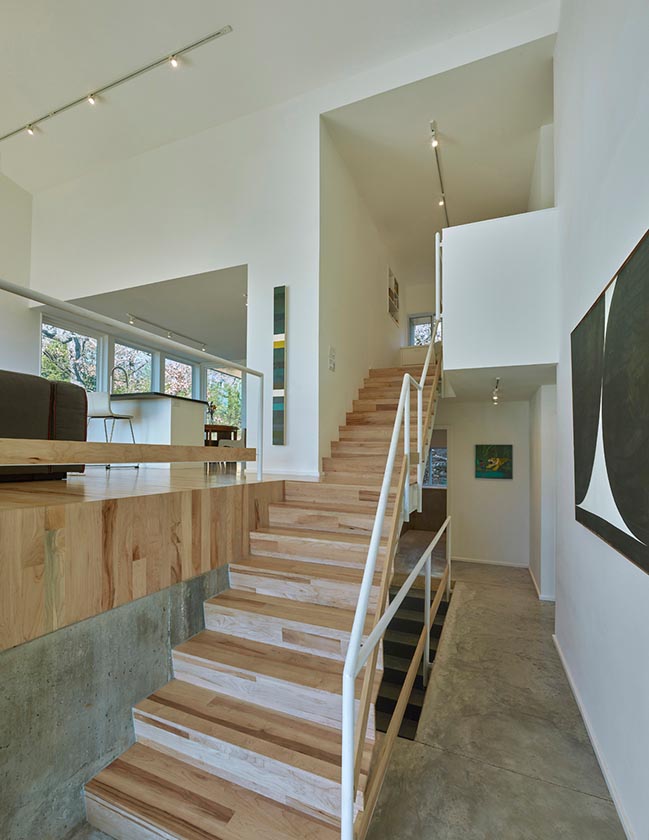 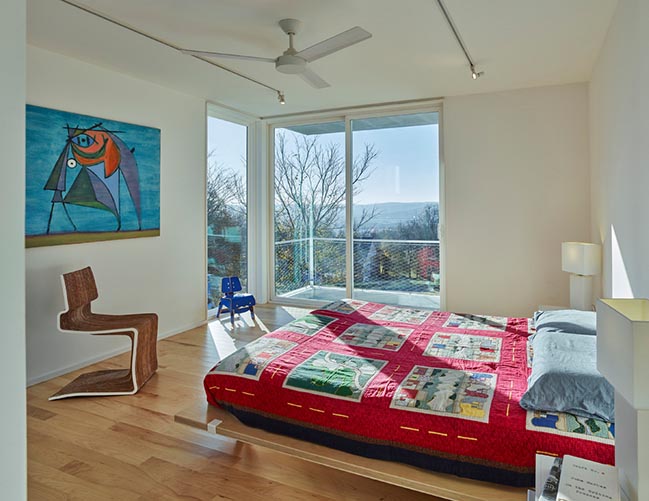 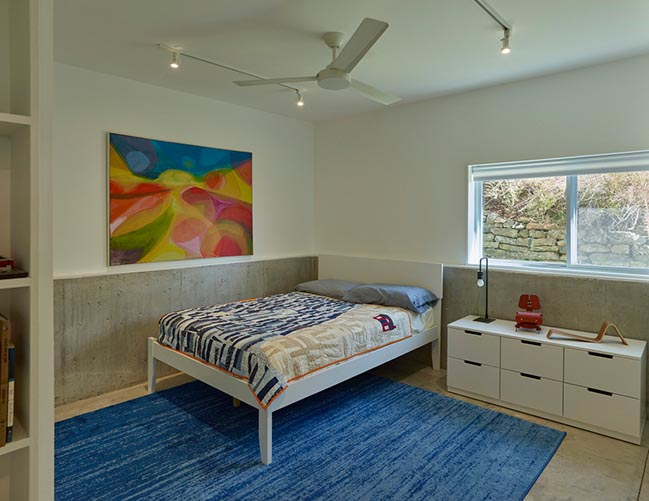 YOU MAY ALSO LIKE: Hillside Sanctuary by Hoedemaker Pfeiffer 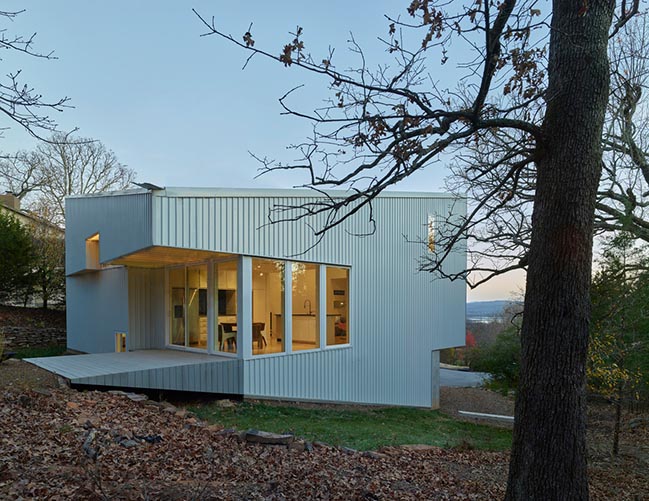 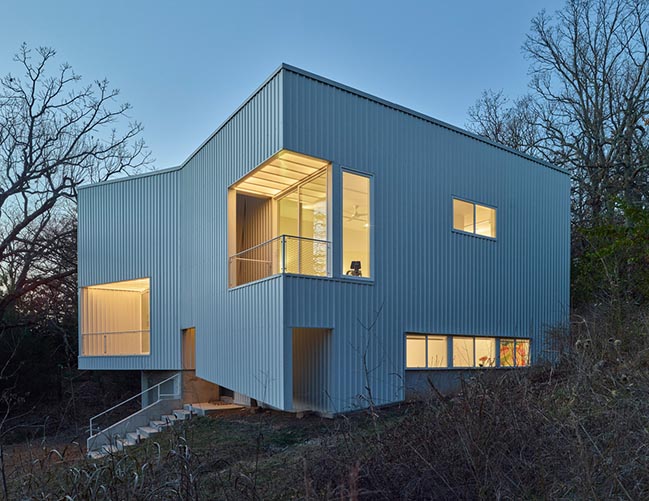 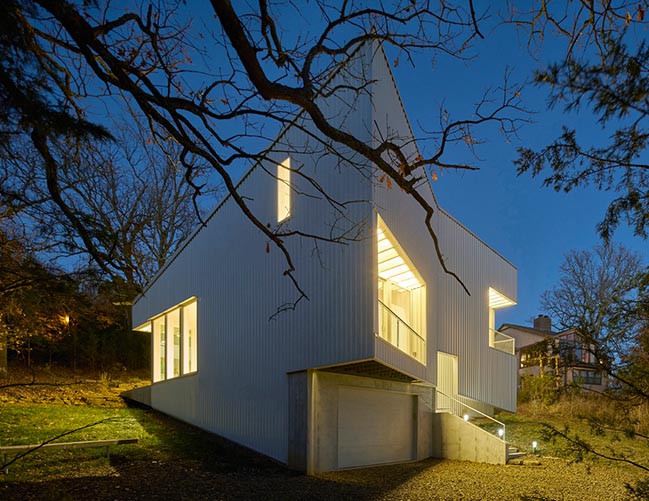 YOU MAY ALSO LIKE: Bedrock House by Turato Architecs 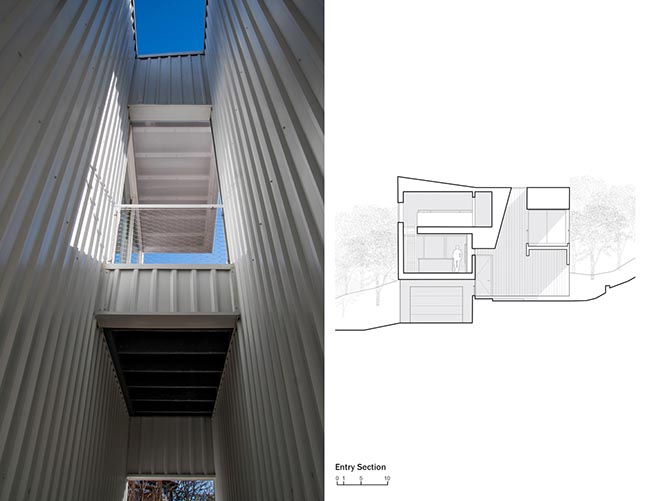 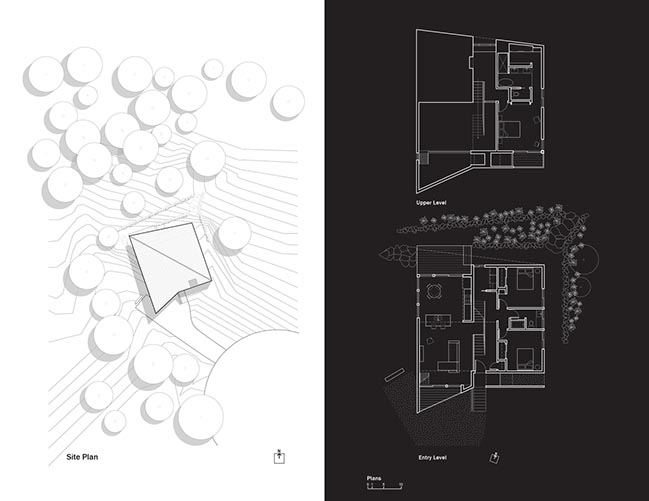 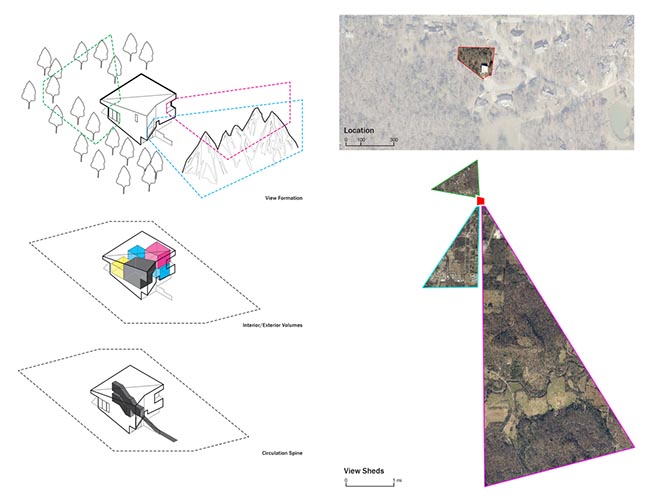 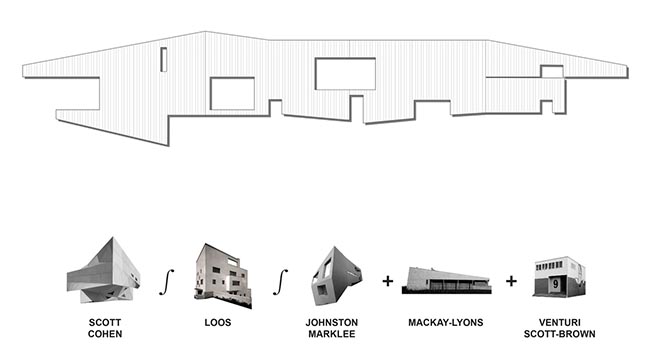 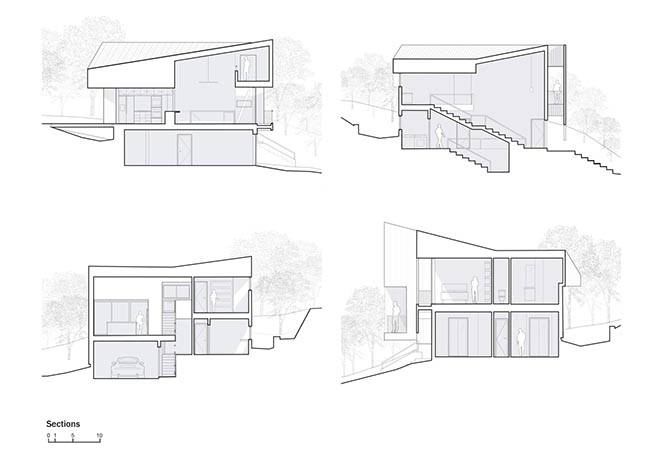 03 / 10 / 2019 Like a mineral, the architecture of the Hillside Rock emerges from interactions with its environment, without attempting to recede into nature 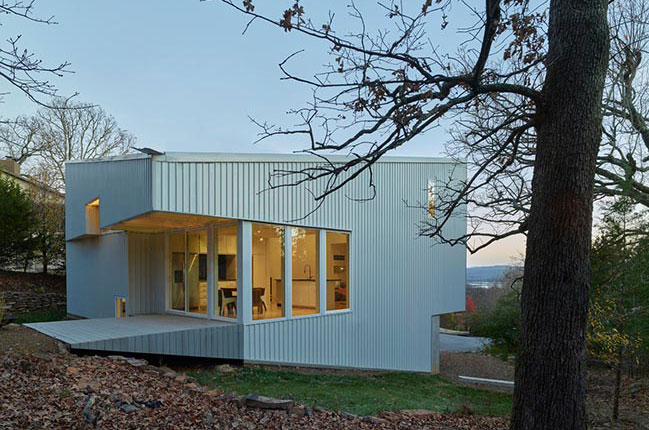