Located on a lakeshore in Quebec, Canada. The Screen House was designed by Alain Carle Architecte that offered the opportunity to design a project outside the typical precepts of "stylish" residences. 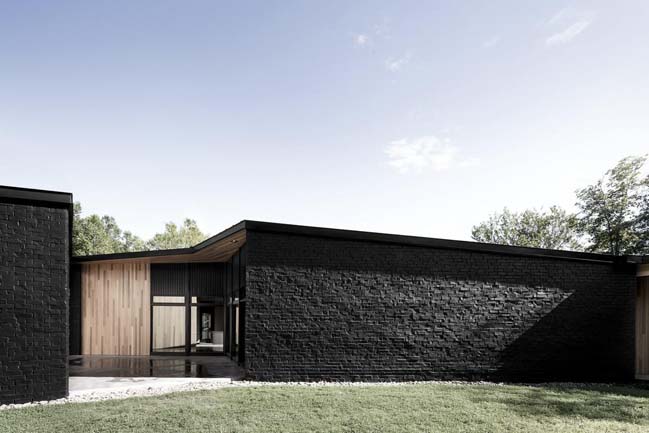 Follow the architects: The contextual constraint of this project, located on a lakeshore, enabled us to pursue the exploration of the possibilities of work geared to perceptual considerations. Narrow in depth, the site presented several setback constraints (next to a lake, stream, street, etc.). The buildable area was therefore somewhat narrow and irregular, which nonetheless offered the opportunity to design a project outside the typical precepts of “stylish” residences. The difficulty with respect to layout also facilitated discussions with the owners during the presentation of the concept, because there could be no question here of an idealized form. On the contrary, the site imposed a non-premeditated conceptual approach, anchored in the possible rather than what was there. 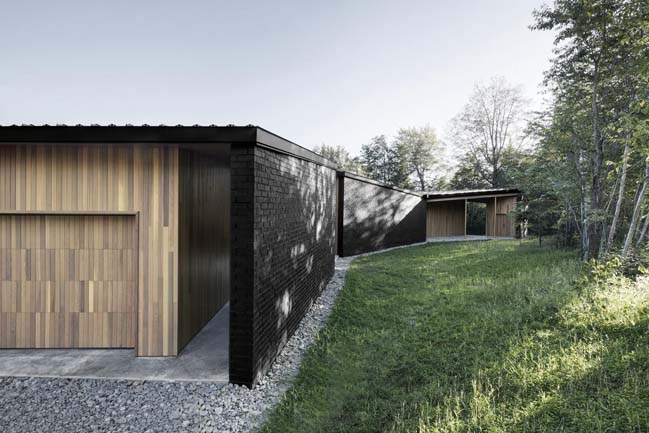 The project therefore followed a long gestation process, in which the geometrical complexity was scrupulously validated in situ to confirm or reject certain data regarding the perceptual quality that would result. This essentially involved blocking the relationship with the street while enhancing the view of the lake, both from inside the residence and from the street, by leaving sight lines to past places marking the trails taken by the log drivers along the lake. Like a screen, the resulting shape of the complex is articulated around a “hinge” space, a geometrical void resulting from bending the space: it was agreed to make this the main access to the building. This place forms the residence’s only major breach, visible from the road circling the lake. 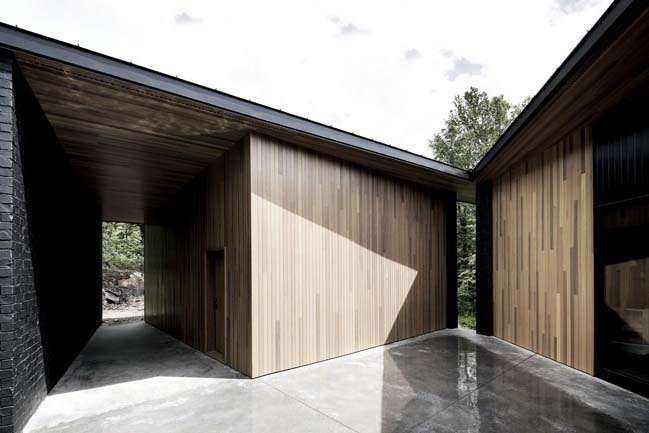 This kind of small inner courtyard opens onto the street and creates a transition between the neighbouring void and the construction limits, in the same spirit as the “cutouts” of the “Les Marais” project. It frames the reception and, above all, creates a transparency that reveals a “chosen” view of the lake through two glazed wall thicknesses. Around this central point, a spiral staircase is set at the junction of the two main axes of the wings, allowing communication between two floors at a geometrical meeting point that is both complex and rich in “points of view”. Inside, a succession of white “space objects” occupies the centre of the floor areas, like large furniture in a variety of shapes. They “block” the space instead of compartmentalizing it, offering different route options within the building and, by the same token, multiple points of view of the landscape of the residence and its vicinity. 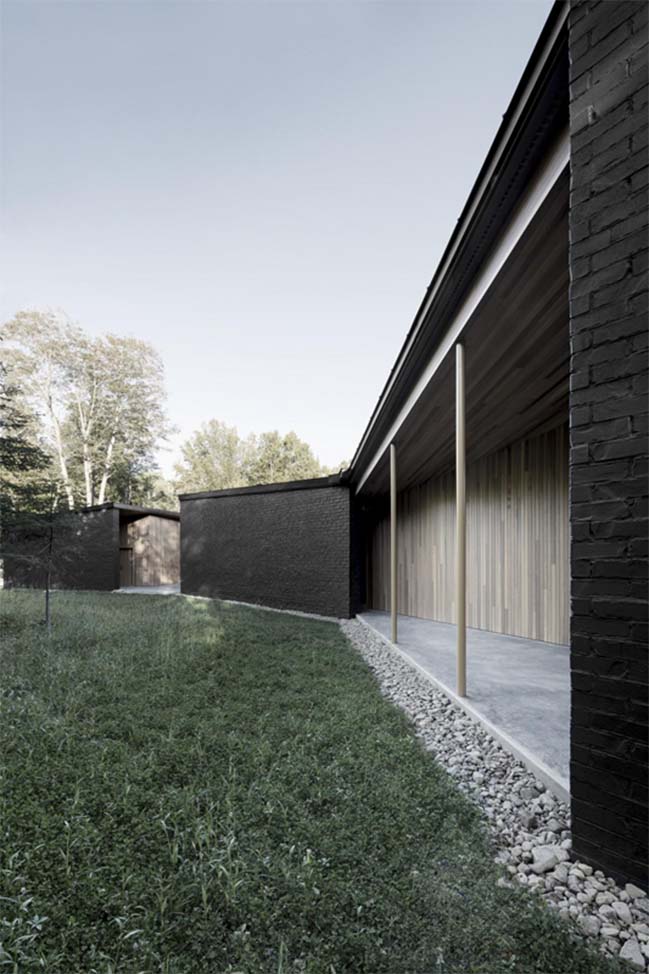 The project’s material language pursues the concept of “layers” from past experience. A recycled brick envelope is painted black to reveal its quality as an enclosure, a neutral visual screen. Cutouts are then made in this envelope to reveal the habitable areas (including the small inner arrival courtyard), separate from the programmatic components prescribed by the client. These “residual” places result from successive manipulations of the form and, by their non-premeditated aspect, potentially become the most significant places of the project, those that will accommodate the occupant’s moments of contemplation. To some extent, this project could be the synthesis of “attempts” resulting from experimentation, which led to the other two projects presented. It fits around a conceptual approach, in which the rules of geometrical composition no longer tend to idealization but to experimentation with form. By extension, this approach could refer to the necessity to reposition the architectural experience at the core of the debate on the future of our environment: what is already there, what is already visible. 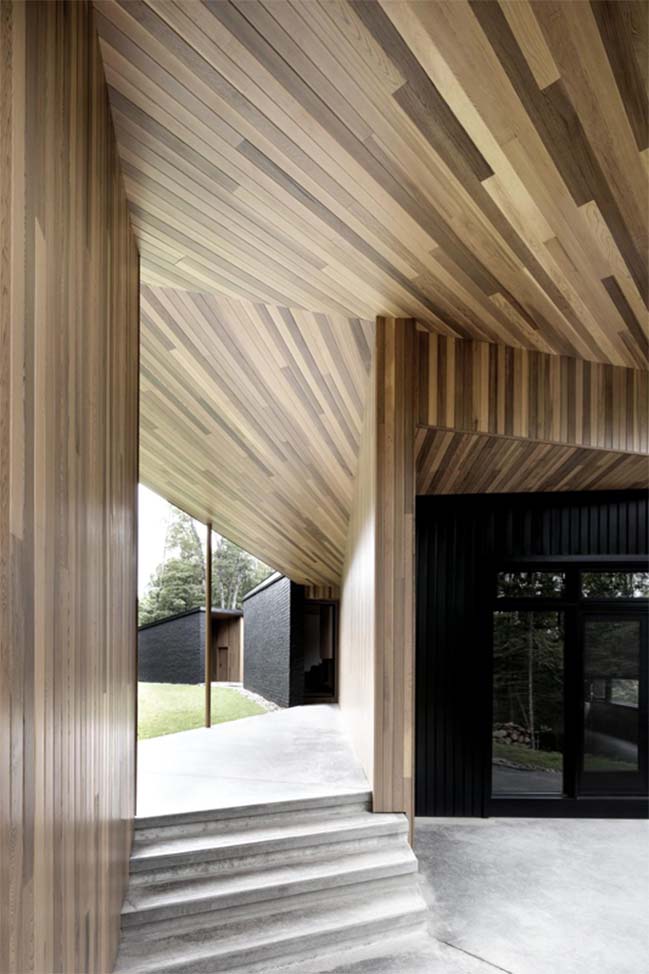 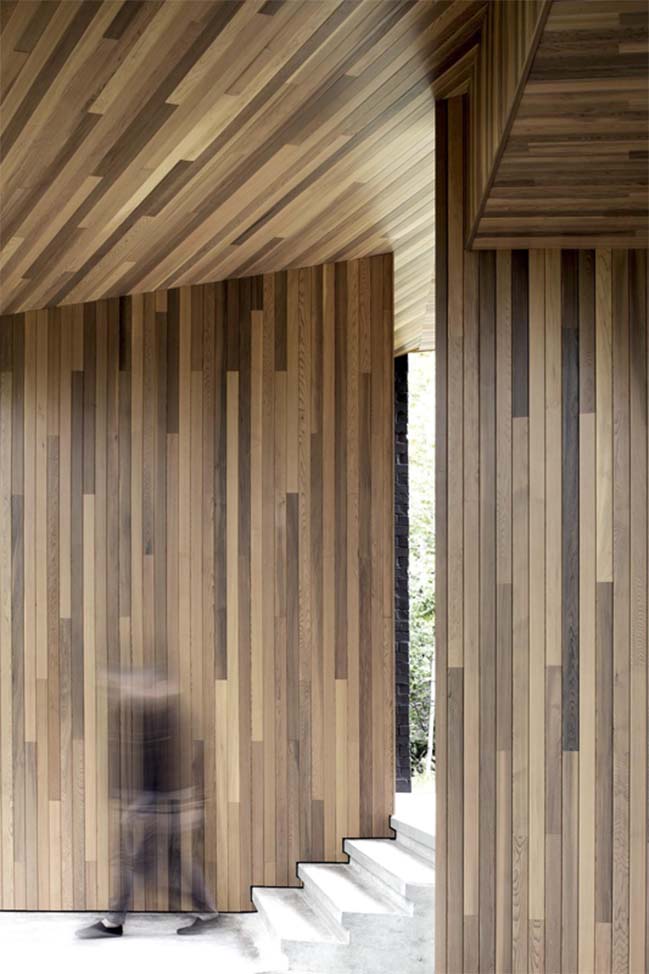 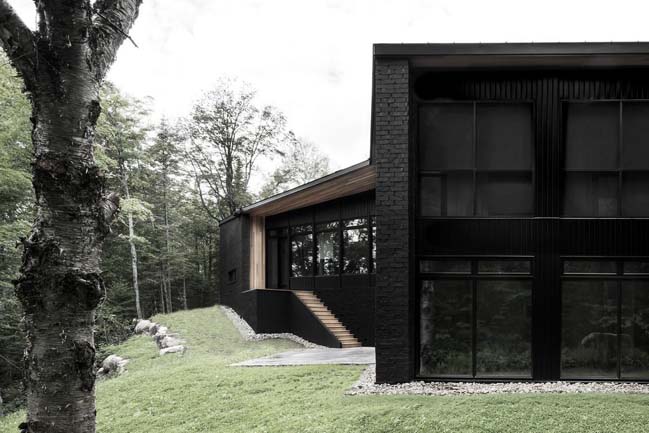 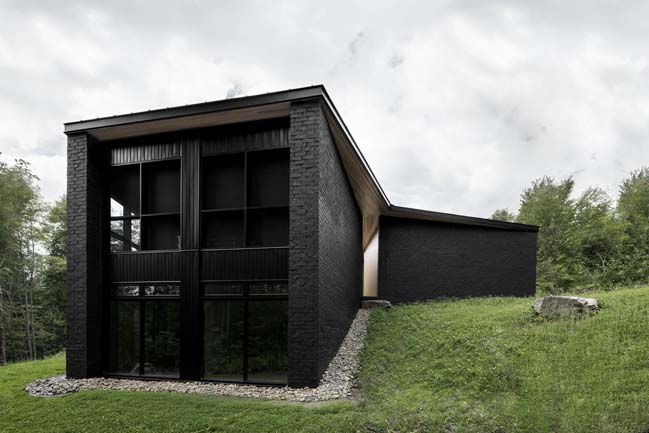 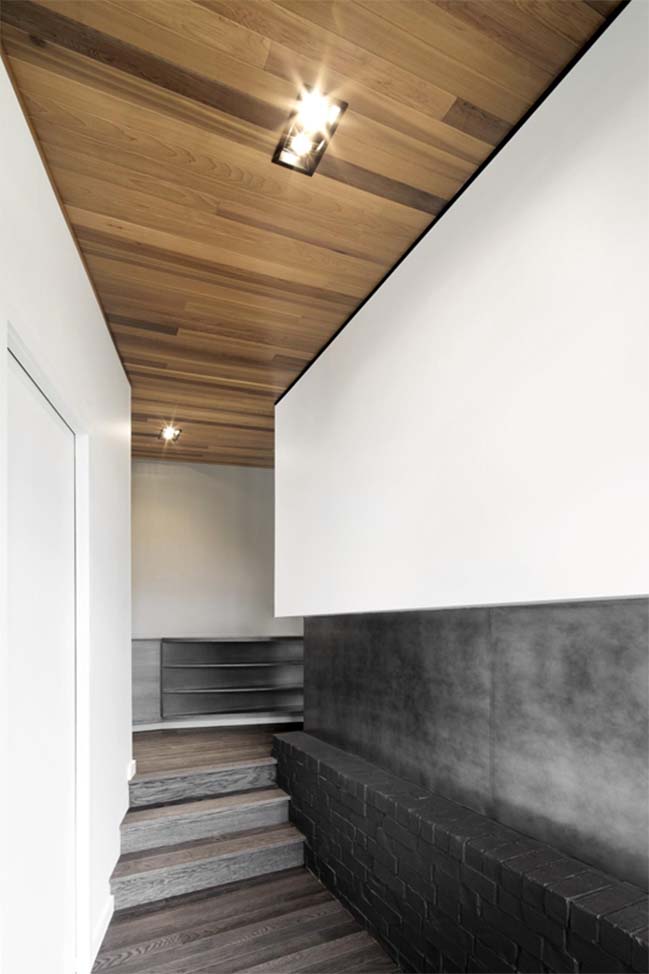 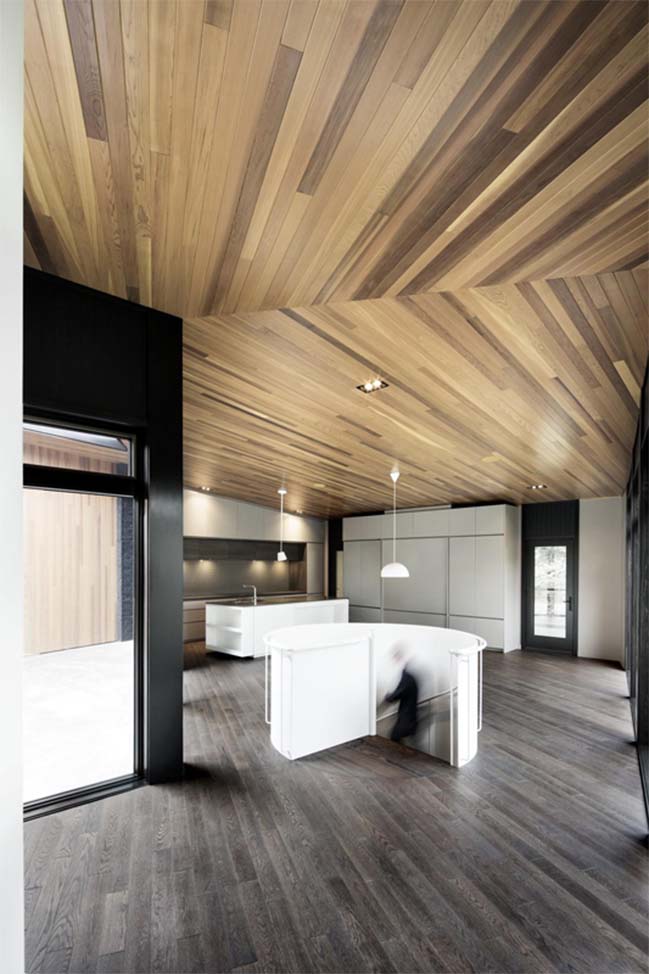 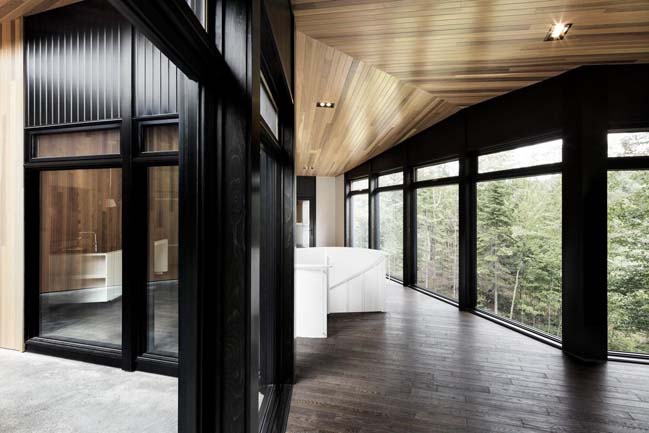 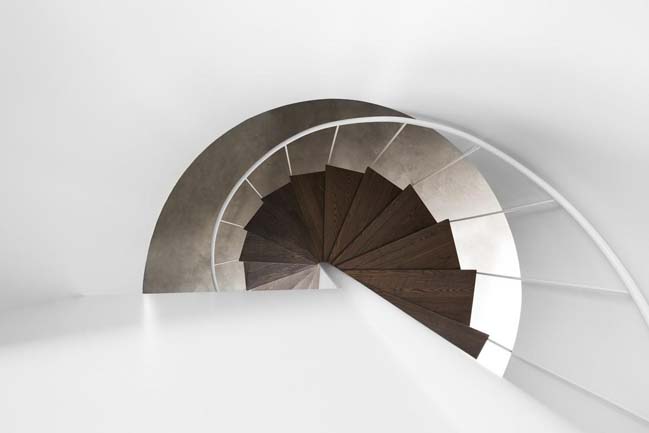 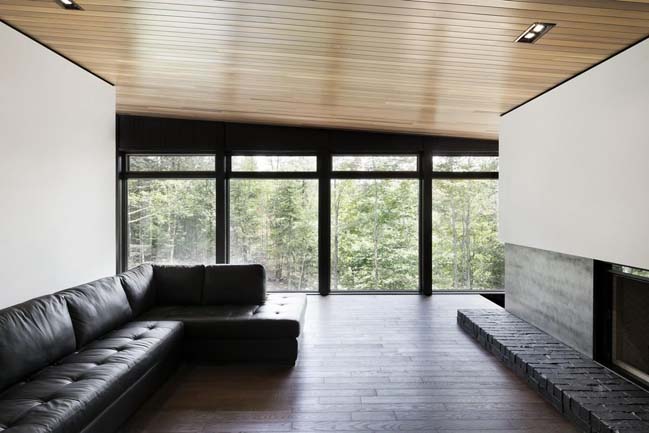 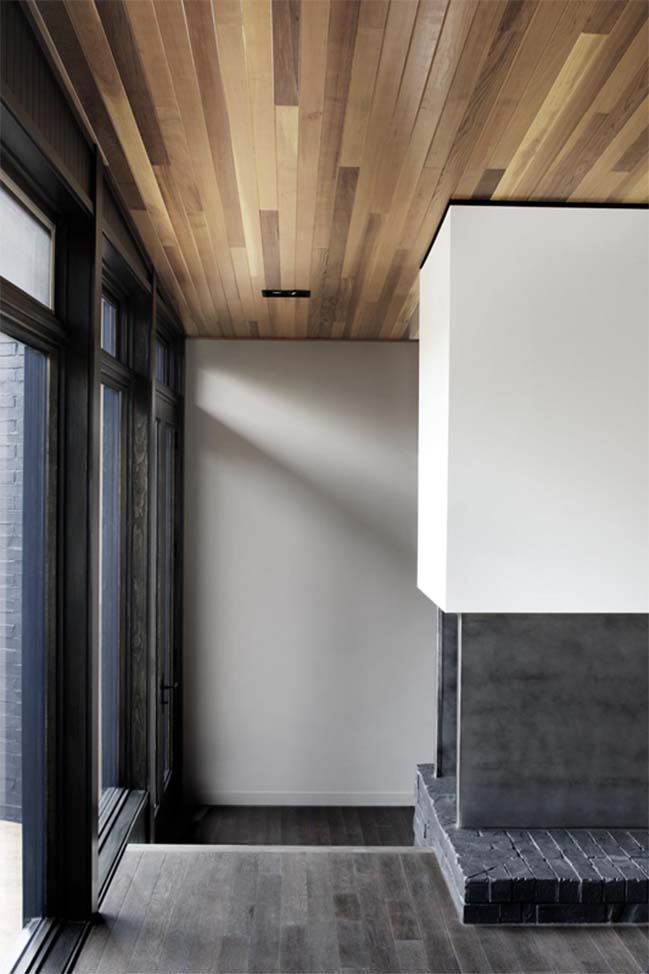 09 / 14 / 2015 Located on a lakeshore in Quebec, Canada. The Screen House was designed by Alain Carle Architecte that offered the opportunity to design a project outside the typical precepts