The new culture building "Zinder" pulsates and stimulates and invites the inhabitants of Tiel and the surrounding area to participate. Music or dance lessons, follow a painting course, borrow books, rehearse with your band and go to a pop concert, it’s all happening in Zinder. De Zwarte Hond, commissioned by Koninklijke VolkerWessels, was responsible for the architectural, urban and landscape design. 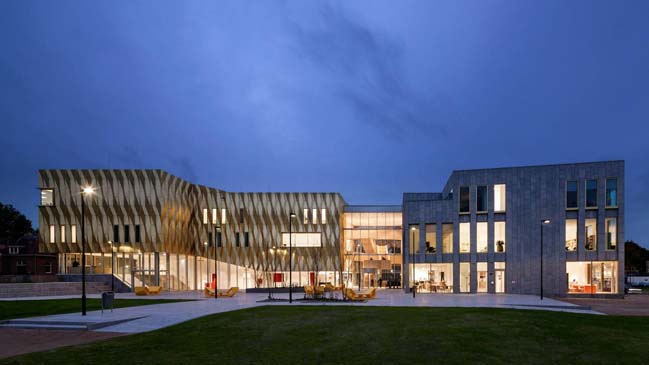 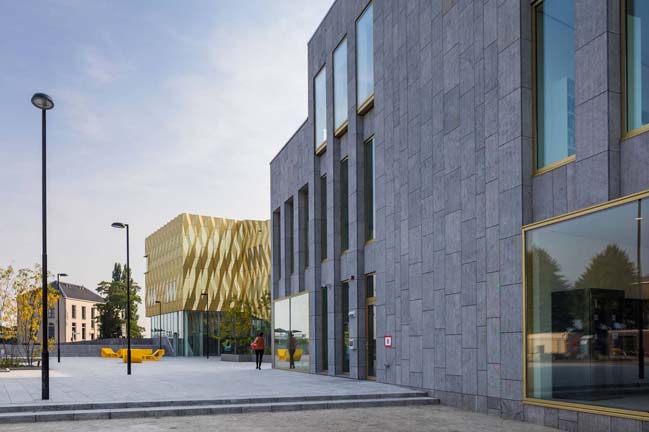 Project's description: The municipality of Tiel is actively boosting the attraction of its city. The qualities of the river Waal will be exploited more fully and the relationship between the city centre and the river reinforced. The level of facilities is being raised and access to the city centre will also be improved. Zinder is an important component of these plans. The project is very meticulously embedded between the river, the historic city centre and the formal Rechtbankstraat. What carries the plan is the raised culture podium: a new plaza with the volumes of the arts centre (Zinder Education) and the public library. The podium exploits the differences in height of the venue, transforming it into an attractive recreational area that will function as an extension to the culture building – blurring the boundaries between inside and outside. The differences in height are transformed into usable spaces and an intimate viewpoint overlooking the river is created. A four-storey, underground car park ensures that the former parking area on the Waal can, in future, be used for events. By separating the entrance to the car park from the building and also thereby giving it shape, the city centre gains a new, welcoming entrance. Visitors to Zinder, but also to the adjacent Agnietenhof Theatre & Film Theatre and the city centre, can park here. 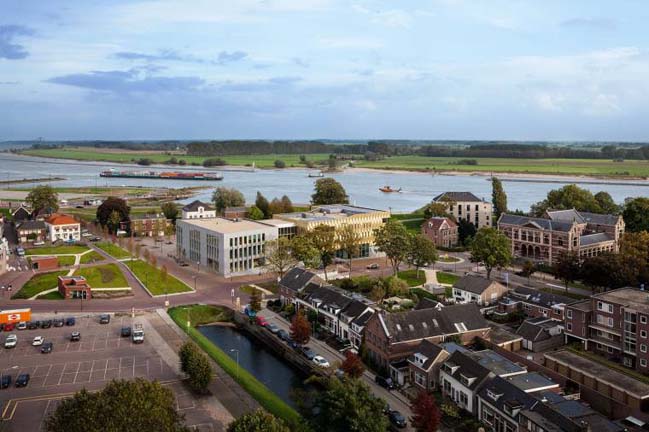 Zinder Education, the centre for the arts, is housed in the “golden lantern” which floats as it were above the culture podium. Next to it, there is a robust, natural stone volume where the library is located. While Zinder Education is a prominent landmark in Tiel, the library seeks more connection with the historic city centre. The central entrance hall forms the link between the two volumes. Here visitors meet and inspire each other. The multi-functional hall that lies sunken beneath the lantern accommodates 320 people. 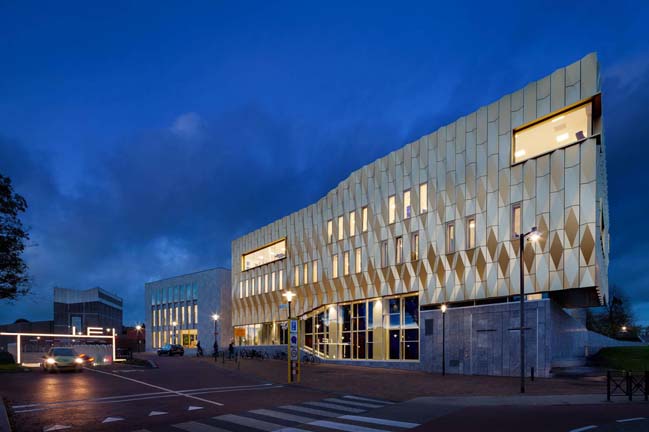 The remarkable façade of Zinder Education comprises faceted aluminium elements, anodised with a golden colour. Together, the folded panels form an origami pattern presenting a constantly varying image to the inhabitants of Tiel, depending on the perspective, weather conditions and time of day. The large windows provide a view of what is happening in the building. From the street you catch a glimpse of the dancers rehearsing, see sculpture students at work, and your attention is drawn to a concert in the multi-functional hall. The stone façade of the library is chiselled, whereby the solid volume becomes livelier and lighter and stands out from the podium constructed from flame-finished, natural stone. The façades have storey-high glass strips that guarantee maximum contact between interior and exterior.  Here, too, the large windows reveal what is happening inside the building. By designing the window frames in gold aluminium as well, it all becomes part of the “golden lantern” family. 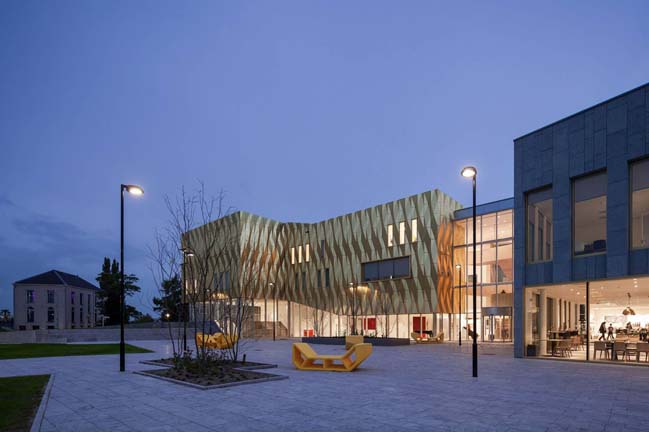 The outdoor plaza flows subtly into the interior, to the central hall that spans the entire height of the building. This is where all the users of the culture cluster converge. The library has an open connection to the hall and there is a cafe directly next to the main entrance. The art library displays its latest acquisitions here, and the tourist information desk and the Tiel archive have their counters here. The sculptural staircase is the eye-catcher providing access to the studios, classrooms and offices on the various floors. The multi-functional hall is also accessed via the central hall, so that it can also serve as an exhibition space, for example. When used in the evening as a pop music venue the hall has a separate entrance via the plaza. 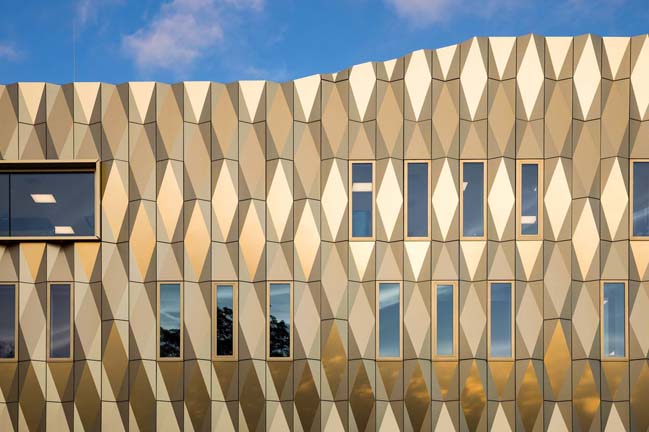 Zinder is a Design-Build-Maintain-Operate project. The consortium for the project was comprised by the following Koninklijke VolkerWessels companies: Gebr. Van Kessel, Van Hattum en Blankevoort, Stam + De Koning and HOMIJ Technische Installaties. Facilicom Services Group will be responsible for the maintenance during the coming years. In addition to De Zwarte Hond, Pieters Bouwtechniek and Peutz were involved in the project as advisers. The landscape design was done by De Zwarte Hond in collaboration with Felixx Landscape Architects & Planners. 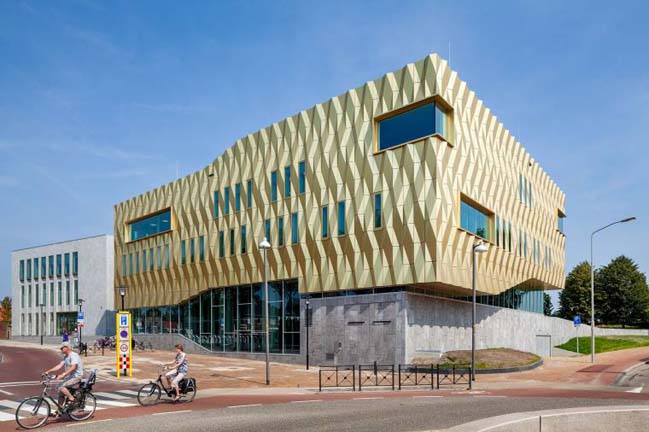 In order to guarantee that the building will stand the test of time, a load-bearing structure with columns and large floor spans was chosen. In future, the walls can be repositioned relatively easily. The library has an open plan construction that can also be organised differently. The installations have the same flexibility, they can be arranged per grid and are demand-driven, with CO2 control. The building has underground heat/cold storage and 240 m2 PV-cells on the roof. These applications mean that Zinder has an EPC of 0.488 and a GPR energy score of 9.0. 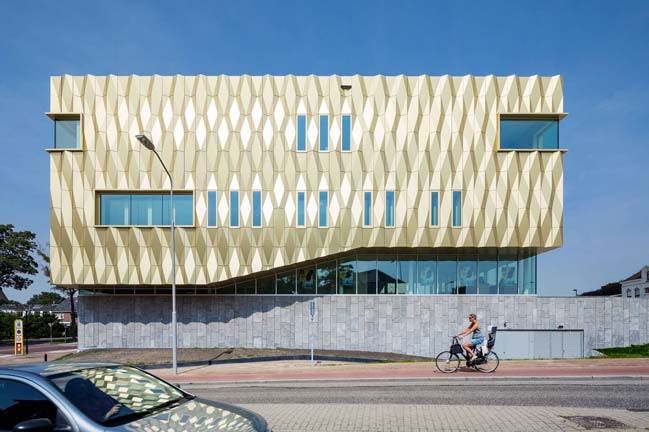 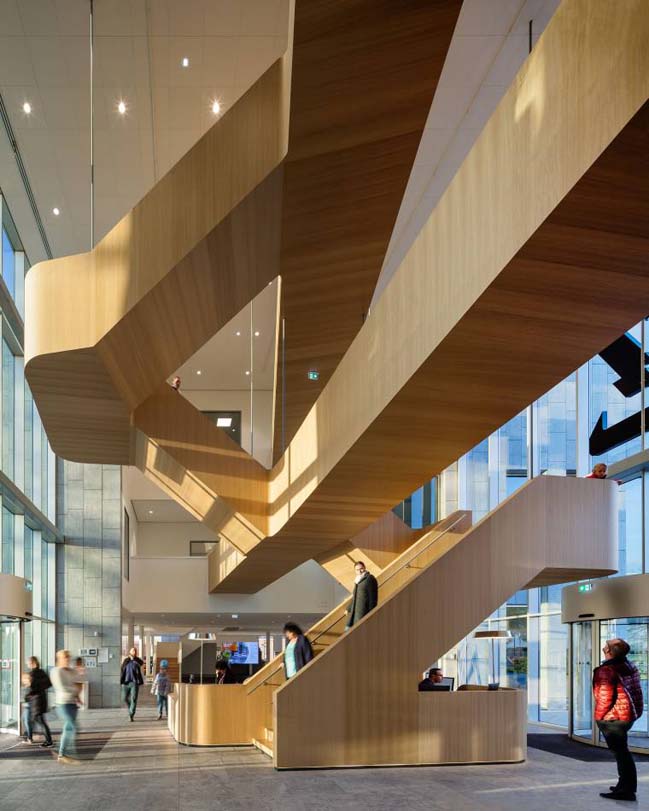 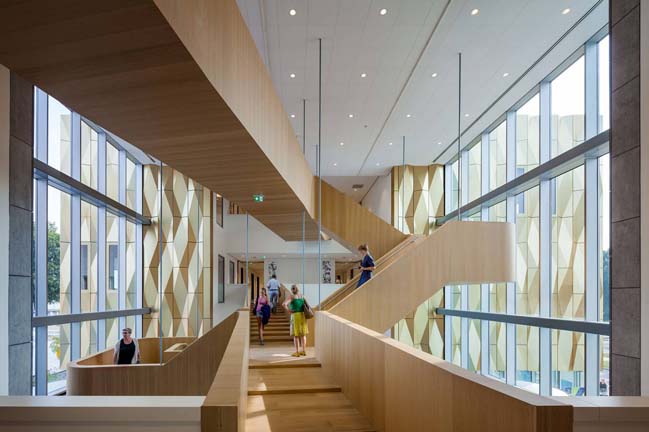 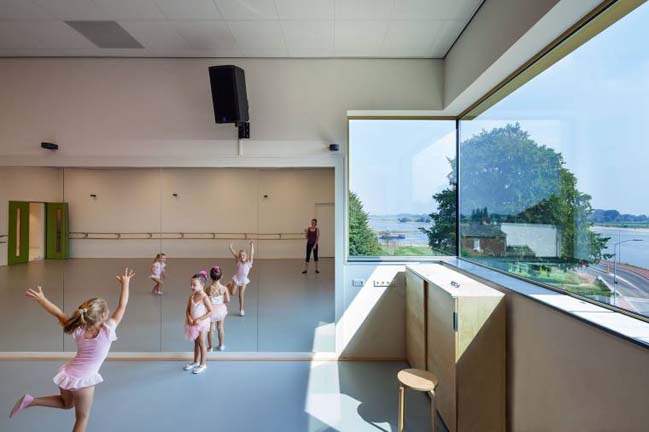 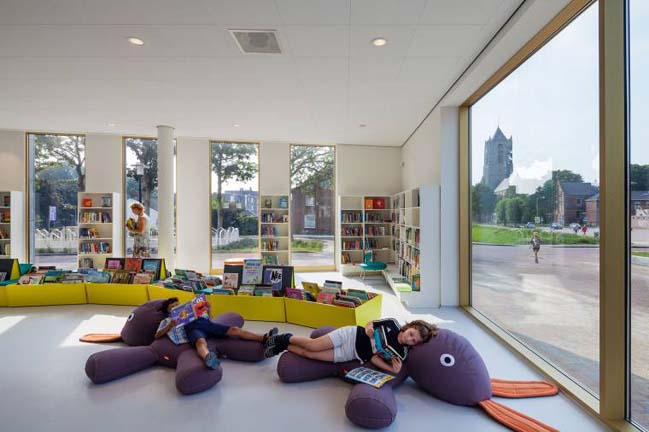 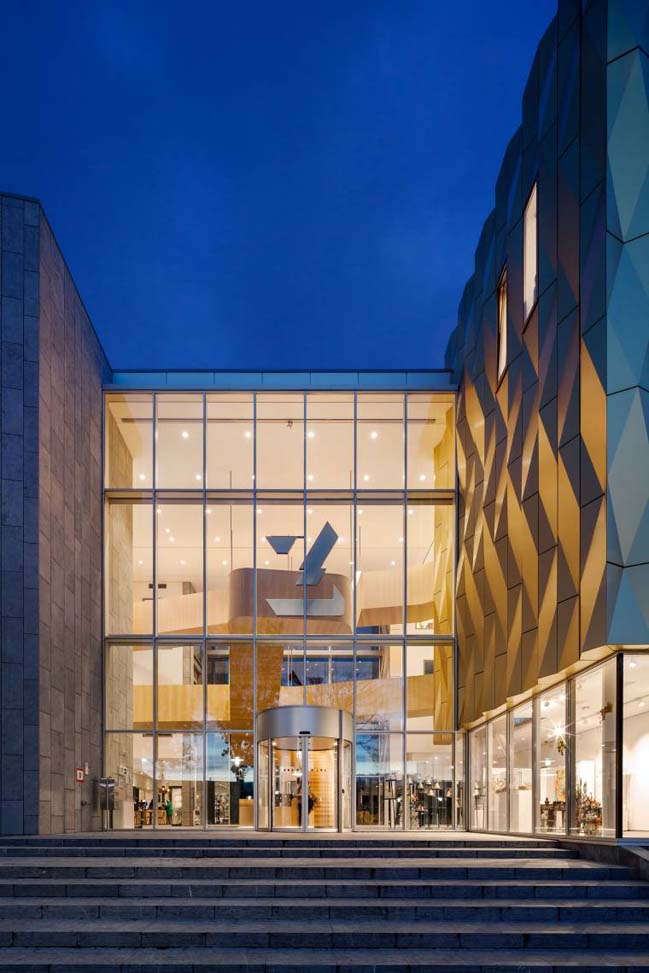 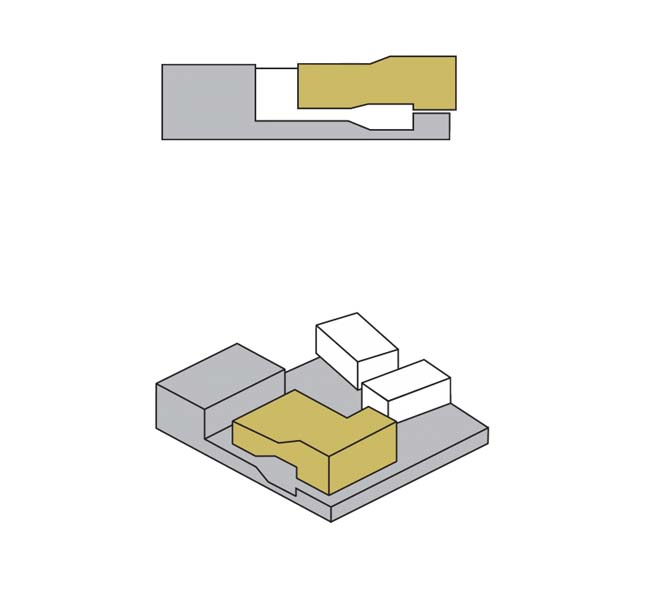