Vanke 3D City - The Next Generation of Skyscrapers by MVRDV

MVRDV has won the competition organized by Chinese real estate developer Vanke to design their new headquarters building in Shenzhen. The 250-metre-tall Vanke Headquarter Tower – unofficially called Vanke 3D City by MVRDV – is due to start construction in mid-2019, and comprises a cluster of eight interlinked blocks of offices, housing and culture, rising from four separate bases to a single crowning tower. It is an ambitious proposal that heralds the next generation of skyscraper design, following the concept of the “three-dimensional city”—an idea that is the culmination of a series of research projects conducted by MVRDV. 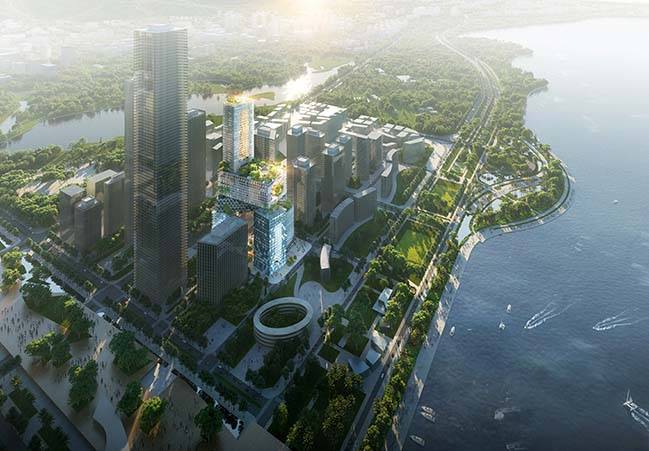 From the architect: The ambition for Vanke Group’s headquarters building in Shenzhen was not only to provide office space for the real estate company’s own staff, but to form a vibrant mixed-use city block containing leasable offices, retail space, a restaurant, a hotel, and plentiful outdoor spaces. This program was proposed to occupy two lots separated by a road. In response to this condition, MVRDV proposed a stack of eight blocks that connects these two plots and bridges the road – a unique and forward-thinking design feature which has received support from the city government – to create a single 250-metre-tall building with a total of 167,000 square meters of floor space. 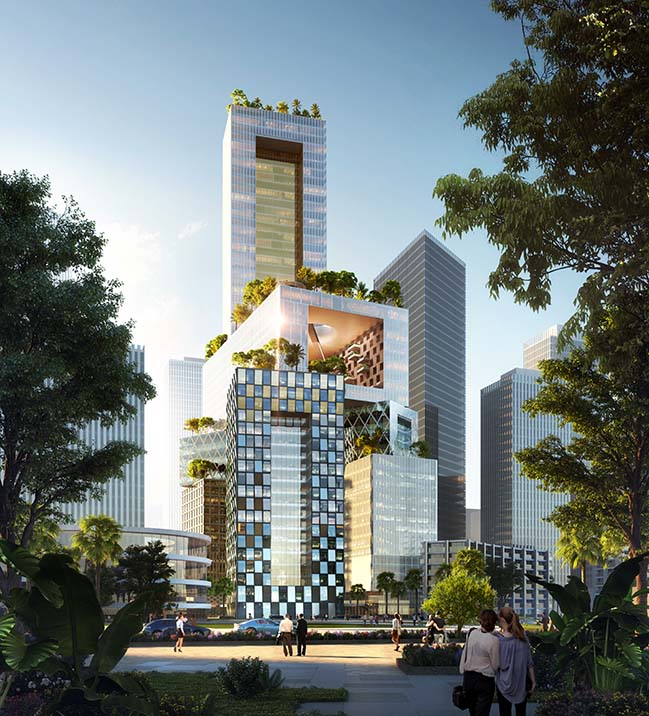 The eight blocks that make up Vanke 3D City are designed to strike a balance between architectural diversity and cohesiveness, with each displaying a different façade treatment. Each block corresponds to a keyword inspired by the core values of Vanke: ‘health’, ‘energy’, ‘open’, ‘team’, ‘green’, ‘nature’, ‘future’, and ‘creative’. Four of the blocks also have either an indent on one façade or a hole that punctures the entire depth of the block, creating ‘windows to the world’ that house atriums, parks, and plazas. These semi-public spaces combine with green spaces on the exposed roofs of each block to create a rich network of recreational areas. 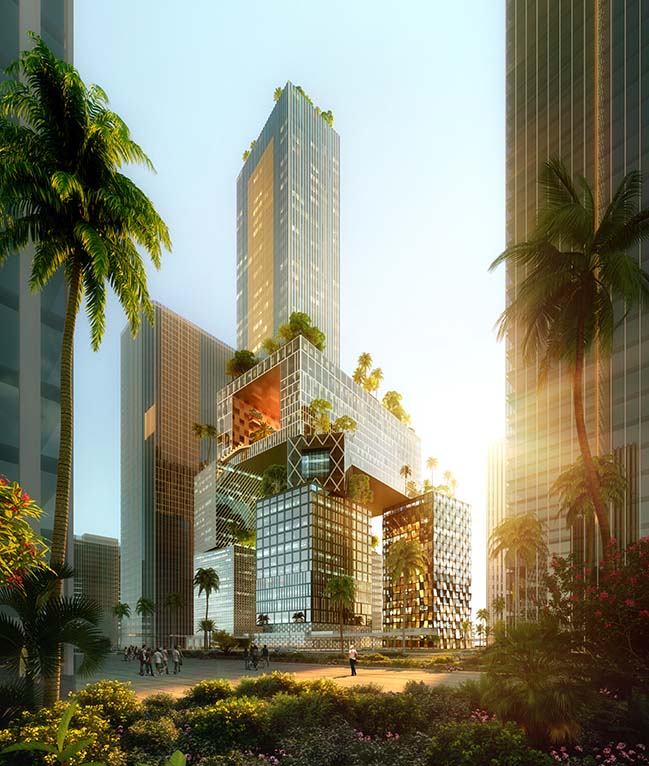 “Vanke 3D City can be seen as a new type of skyscraper. By stacking the required programmatic entities, initially proposed for two separate plots, on top of each other, the two individual Vanke Group Headquarter buildings are turned into a Vanke City”, says Winy Maas, principal and co-founder of MVRDV. “They turn the ordinary into the extraordinary.”

Maas adds: “By opening the buildings, a series of giant collective halls are created with a view over the bay and to the world. The plazas, gardens, and halls are connected by a series of stairs and elevators, linking the many blocks into a continuous urban fabric high off the ground—a true three-dimensional city.” 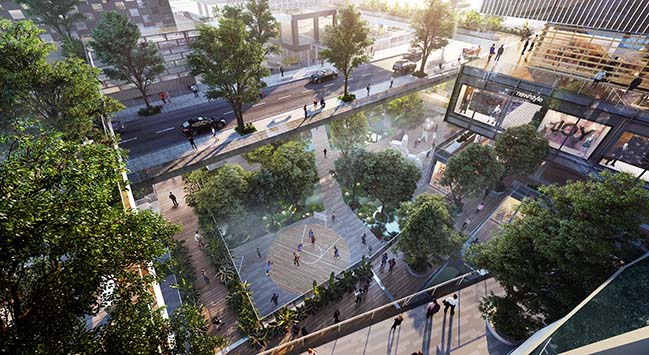 At the base of Vanke 3D City is a sunken, multi-level green public space, which extends from the second level below ground to the first level above, incorporating the road that cuts through the site. This network of plazas and walkways offers a shaded, well-ventilated space that provides a respite from the tropical climate of Shenzhen. Open 24 hours a day, it will offer access to the commercial and restaurant levels in the base of the four corner blocks, inverting the plinth typically incorporated into tower designs. The above-ground walkways are also designed to be extended into the neighbouring developments, in the hope that the pedestrian realm created at Vanke 3D City can spread to connect buildings throughout the district. 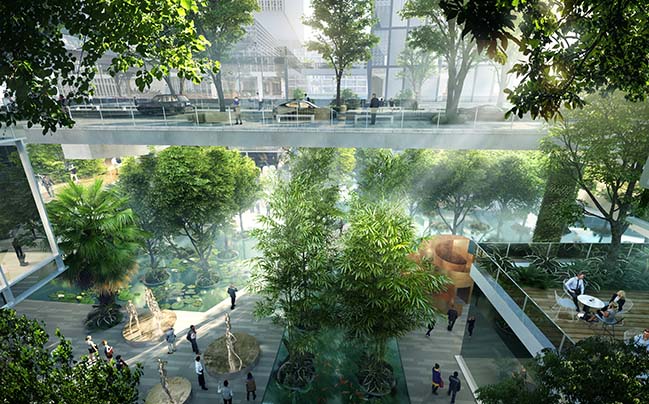 The concept of the three-dimensional city is one that developed from two parallel research threads pursued by MVRDV. The first was begun by the Vertical Village project of 2009, which sparked a decade of investigation into how sustainable social dynamics and individuality can be maintained in dense urban environments by using cluster typologies. The second was a study into the evolution of skyscraper design: In the modernist period, skyscrapers were typically just an extruded rectangular ‘monolithic’ box. Later, singular structures with gestural forms developed, and more recently, another skyscraper typology has become popular, one the designers refer to as the ‘linked monolith’—that is, two or more extruded structures which are connected by sky bridges or show some other ‘collective gesture’. The three-dimensional city is a typology that moves beyond the extruded monolith entirely, using the clustered form inspired by the Vertical Village to create a skyscraper that is composed primarily of collective gestures. 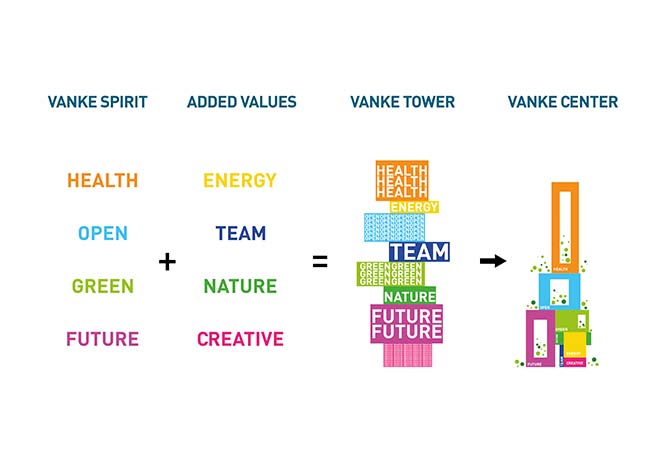 The ambition to design the skyscraper of the future is matched by the proposal’s collection of sustainability features. In addition to the many green roofs formed by the tower’s cluster shape, the green park at the tower’s base aligns with Shenzhen’s ‘sponge city’ program, which encourages porous landscapes to prevent flooding and reduce the city’s impact on ecosystems. In addition, the design includes systems for water collection and recycling, and while each block features a different façade design, all use high-performance façades.

MVRDV is collaborating with engineers Arup. Preparation work on the site is already underway, with construction expected to begin in the summer of 2019. 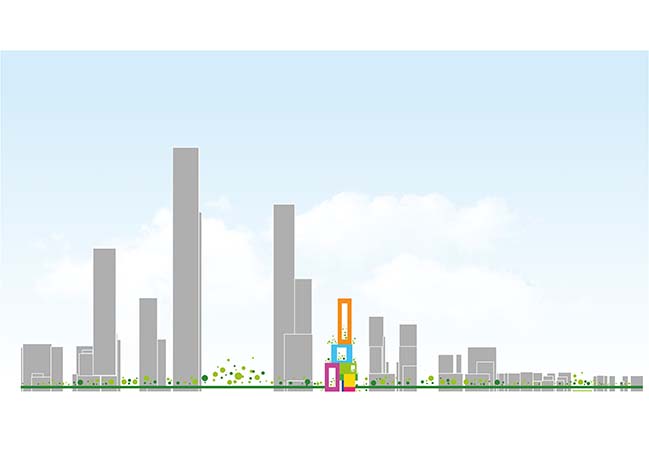 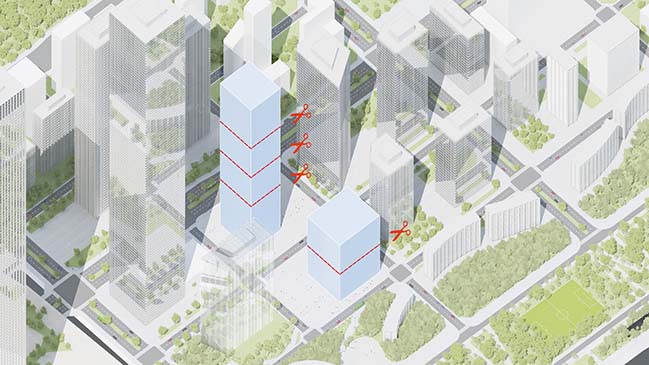 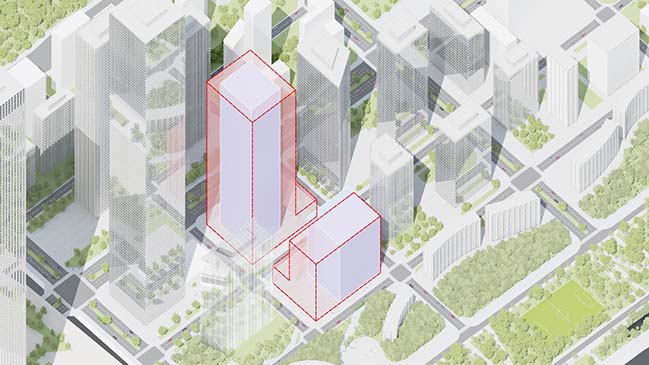 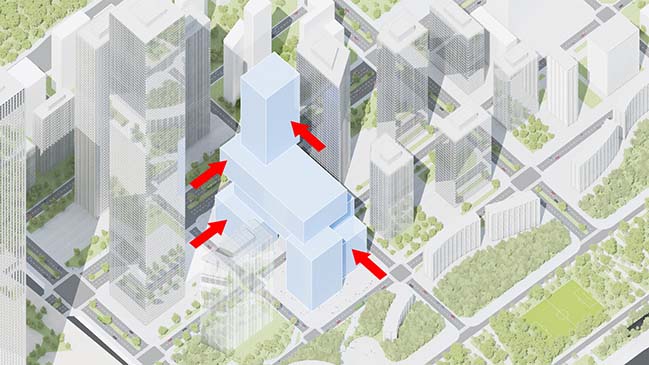 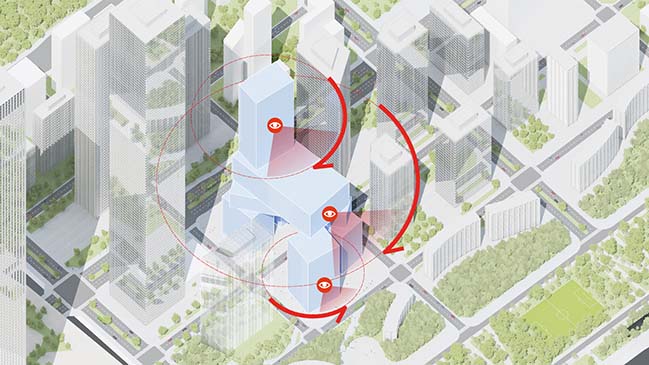 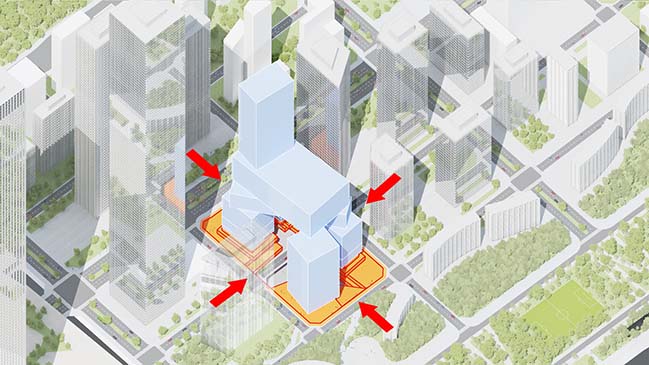 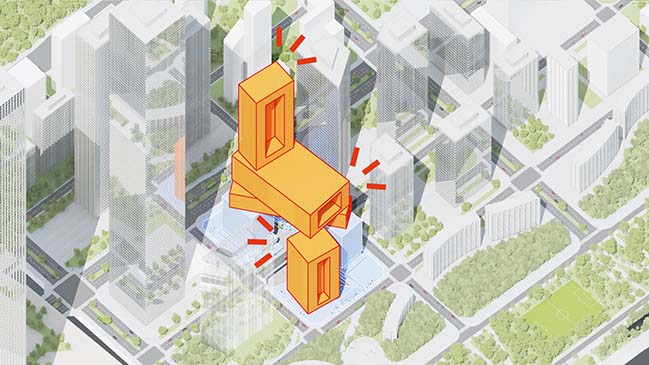 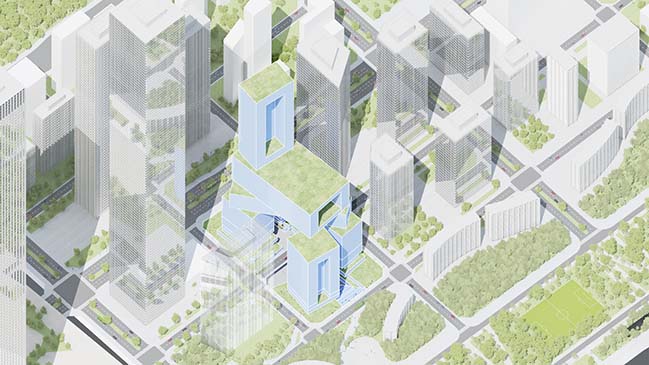 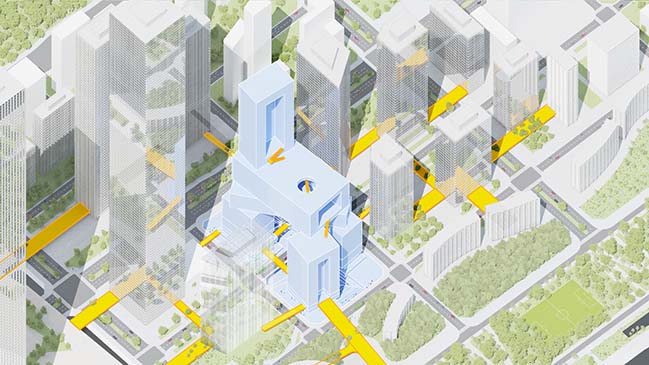 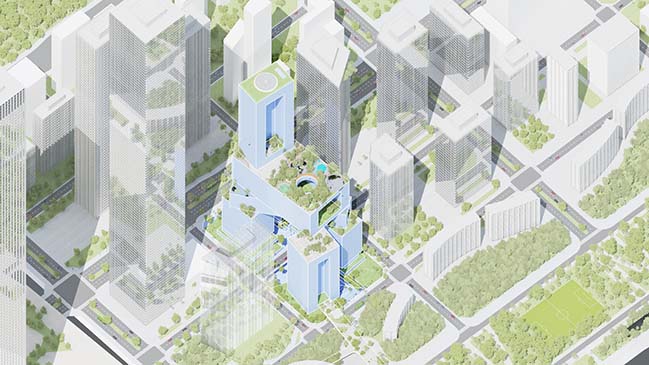 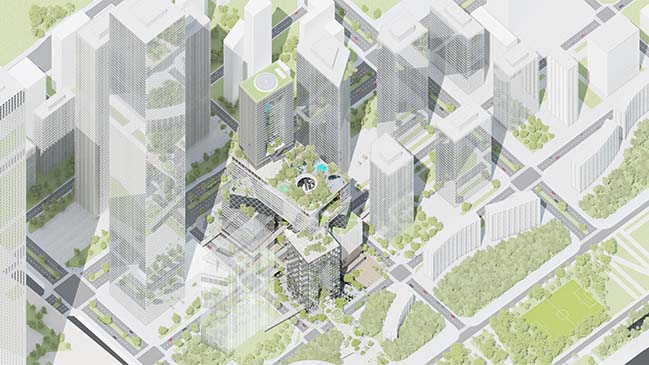 Vanke 3D City - The Next Generation of Skyscrapers by MVRDV

12 / 19 / 2018 The Next Generation of Skyscrapers: MVRDV Redefines the Tower with Vanke Headquarters Competition Win in Shenzhen