On The Rocks - a spectacular concrete and glass house in a unique beautiful and challenging site in Lebanon... 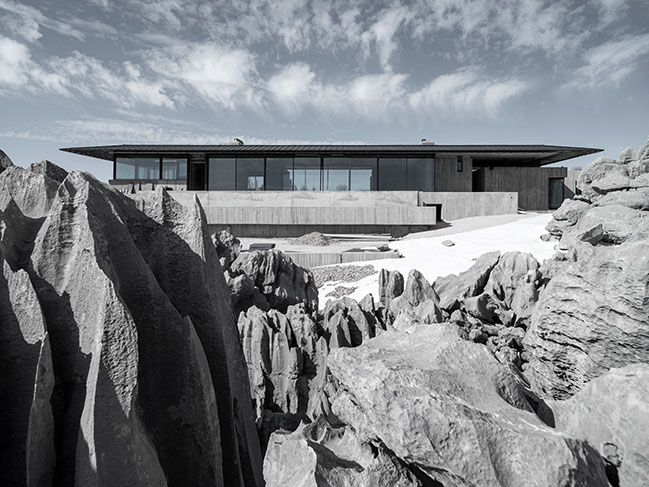 From the architect: It is on a spectacular canvas of grays that he desires to retreat. He chooses an inspiring site in Faqra where rock formations carved by millennia of rain and snow compose a natural inviting cradle with panoramic views to the club, the surrounding rock park, the valleys and Beirut beyond. 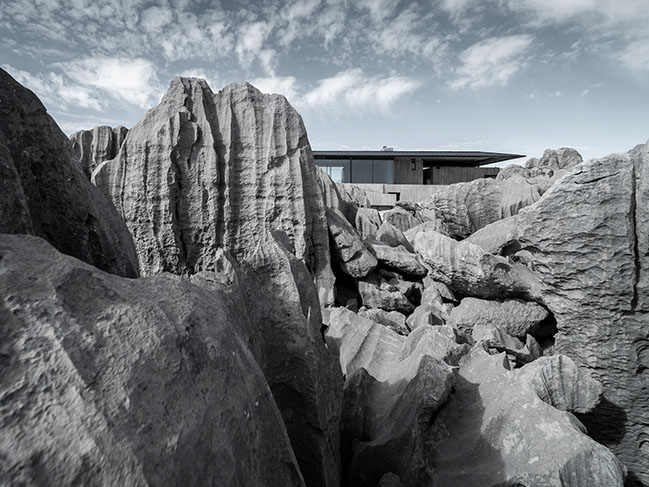 Seeking a total immersion in nature, we expand the existing grey canvas into man-made fair-faced concrete volumes that contain the intimate functions of the house. Bridging across those apparently dispersed boxes, a zinc roof floats to create a seeming enclosure. But where roof happens, enclosure disappears, and where enclosure happens, roof disappears. The intimacy of enclosure is here opposed to the openness of an extreme transparency as they do not happen at once in this atypical house. 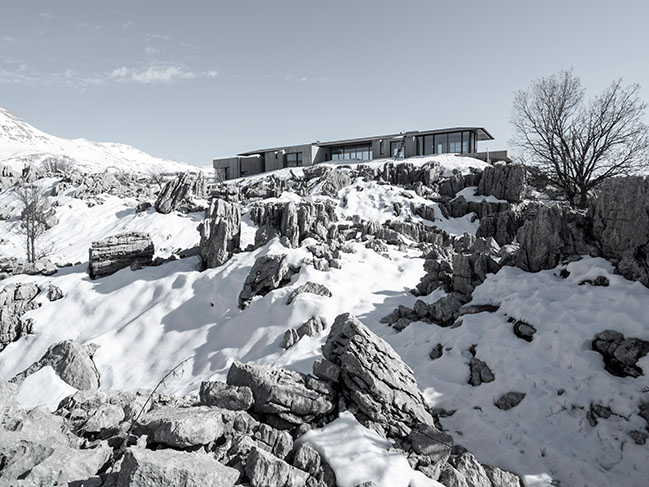 The boxes contain three 'punctured' bedrooms, where every entrance at the turn of an angle opens up to a small patio with a tree, a rock and a selected perspective to the outside. The rooms are warm worlds, fully cladded in wood to create the needed double wall without exceeding a contemporary standard of thickness. 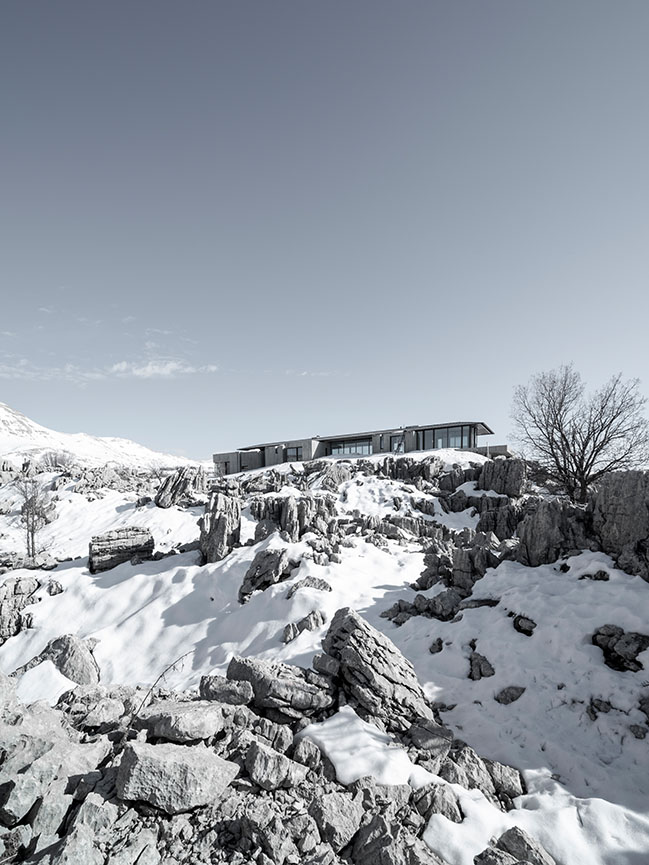 The reception area is the absence of enclosure to an extreme. Sitting under a bridging roof 18m in length, its fully operable facade to the north and south creates an unusual setup for such an environment where the possibility of living outside during the spring, summer and fall becomes the natural invitation. 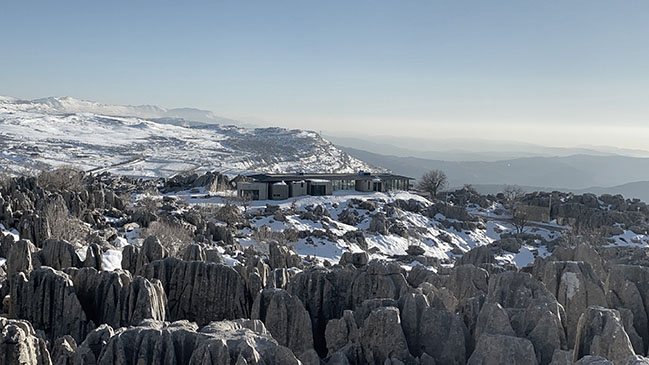 The house is entered from the west side via a cascading staircase that meanders around the rocks, reaching to the reception platform/terrace where a long pool juts out towards the view and cascades down towards the street. The southeast corner with its existing circular rock formation becomes the receptacle for a sundeck with a fire and an extended reception terrace with lavender, scattered smaller rocks and pebbles in the zen tradition.

The overall composition - a multitude of grey volumes surmounted by a roof - do reiterate the elements of a house iconography. But it is as if nature has taken over, and in the numerous gaps where light seeps at varying angles, it is more of a garden folly that emerges this time. 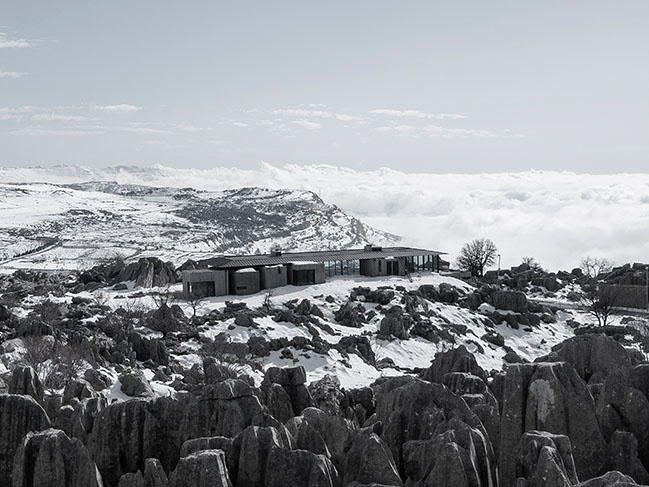 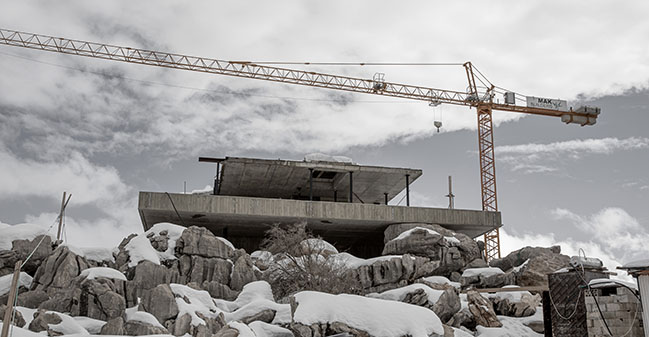 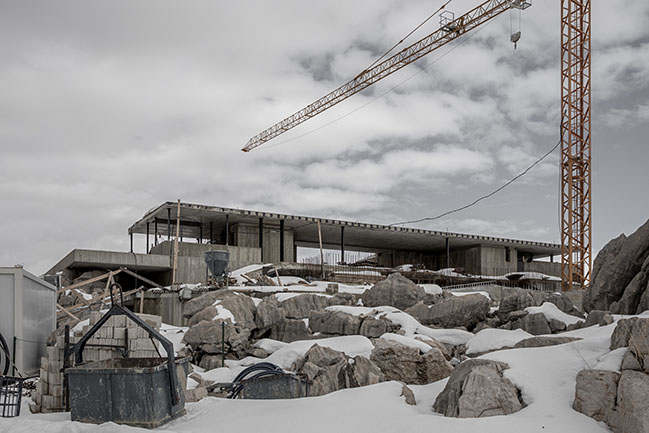 YOU MAY ALSO LIKE: Red Rocks in Phoenix by The Ranch Mine 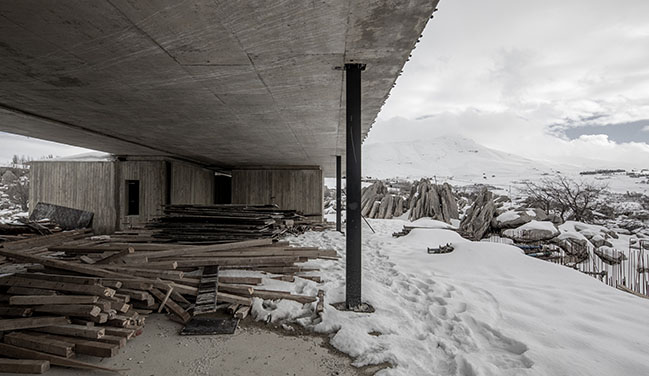 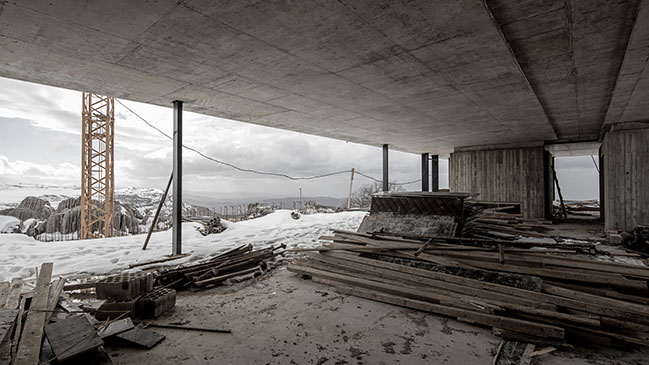 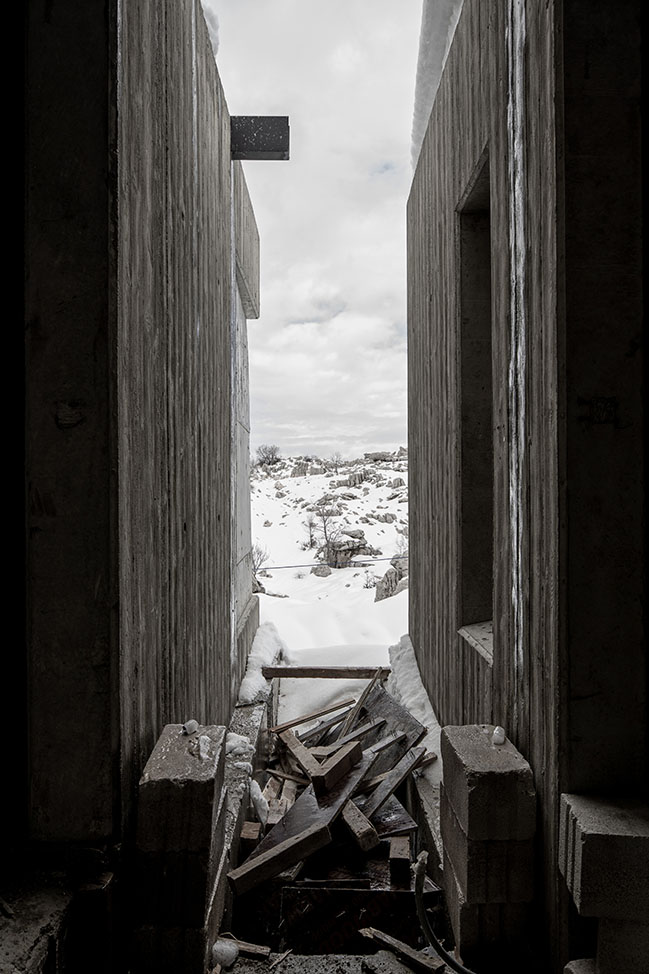 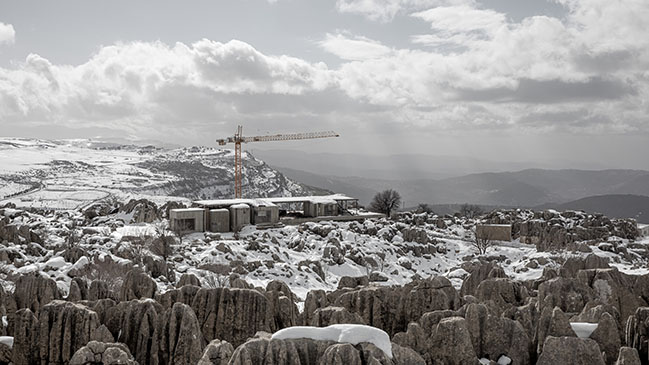 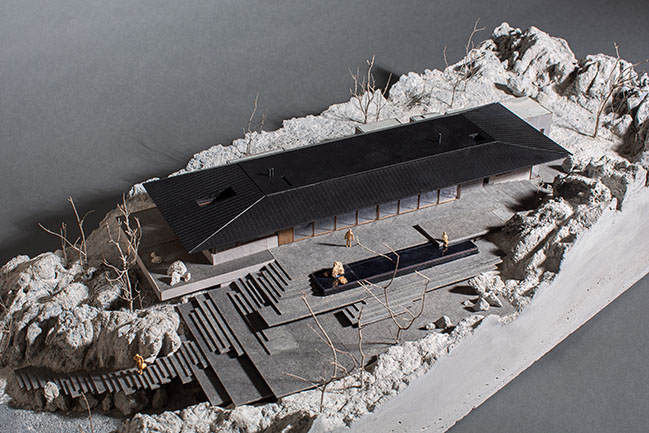 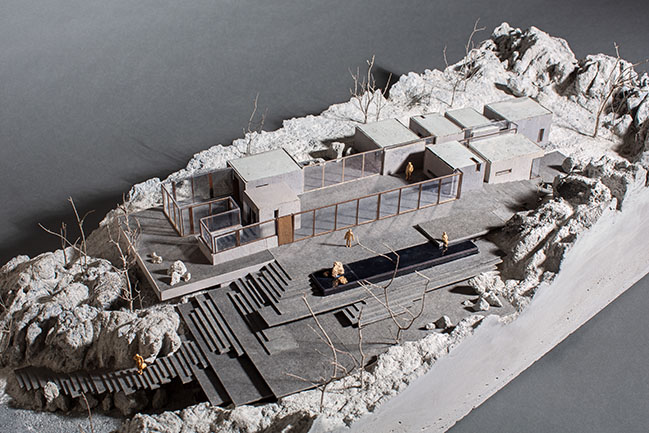 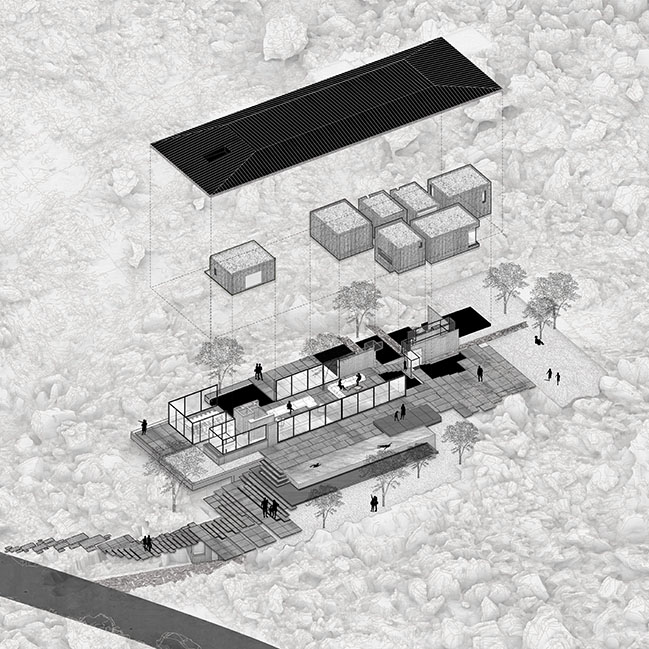 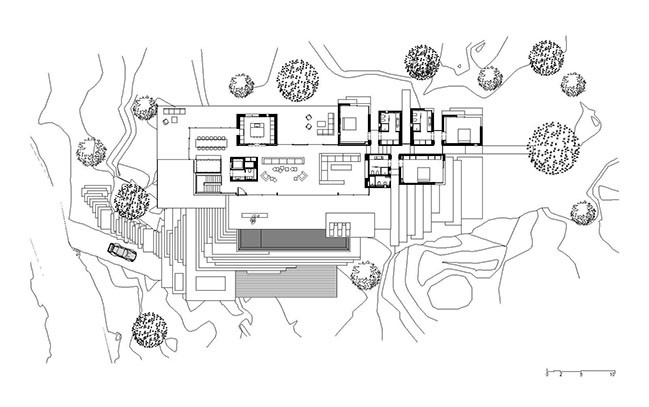 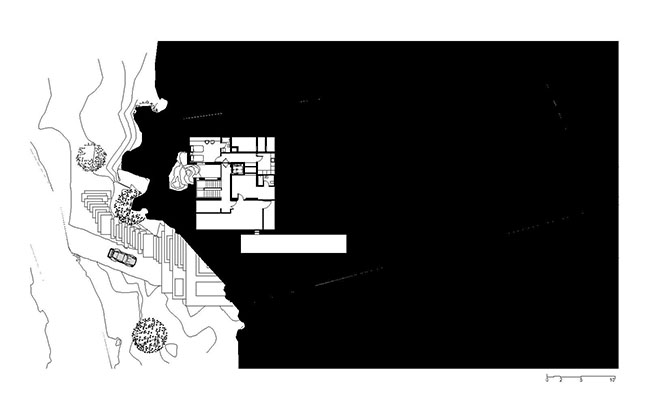 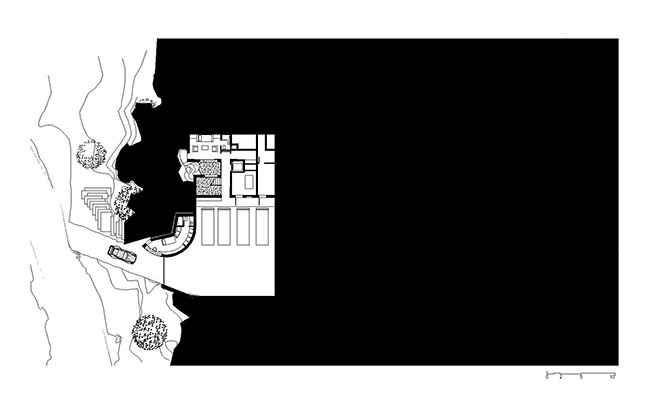 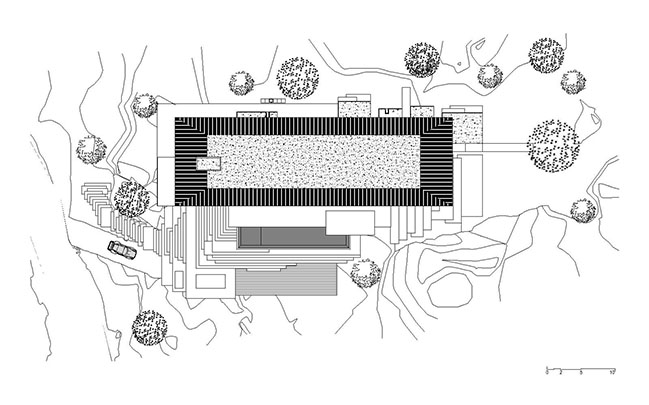 10 / 05 / 2021 On The Rocks - a spectacular concrete and glass house in a unique beautiful and challenging site in Lebanon... 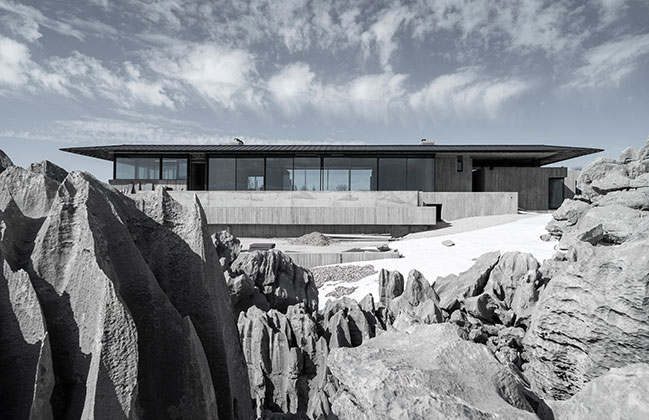