BFDO Architects enlarge the 1950s ranch house and take advantage of the sweeping vistas and light reflected off the water. 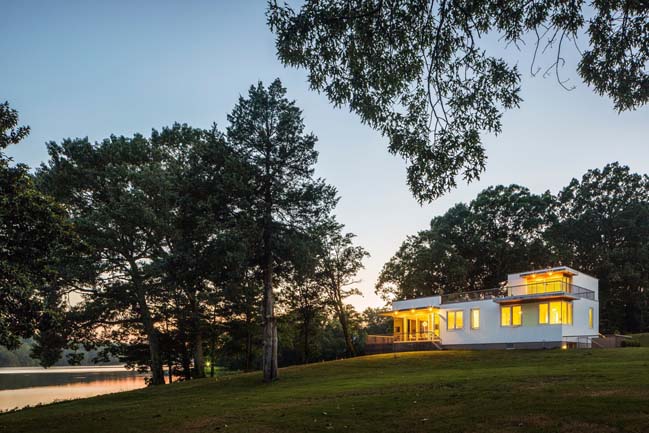 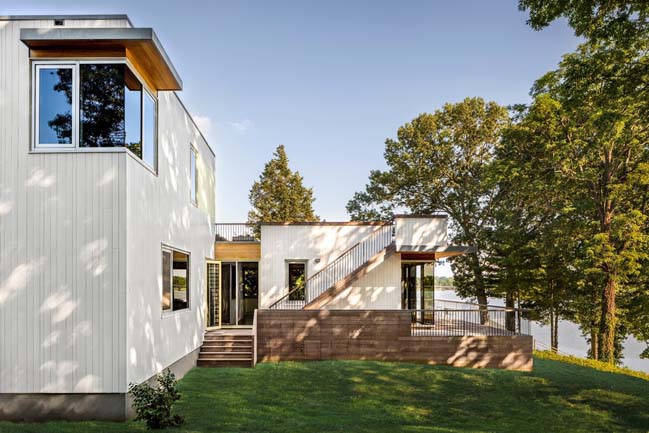 From the architects: A 1950s ranch house failed to make the most of its 17-acre site overlooking two converging creeks. The owners wanted to enlarge the house and take advantage of the sweeping vistas and light reflected off the water. The house was torn down to its foundation, which had to be kept in part due to the building’s proximity to the water. (The Chesapeake Bay Act would have required that a new structure shift significantly away from the shore.) 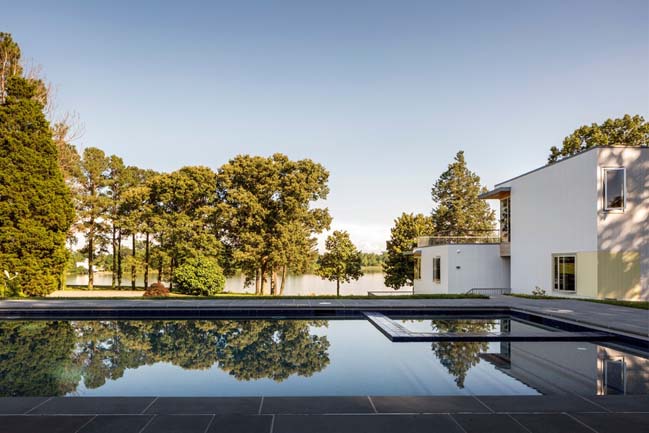 A new entry on the east facade divides the original south-facing volume from the den extension to the north, creating a breezeway with a water view and access to a wraparound desk. An exterior stair continues the breezeway sequence, which culminates in a rooftop garden. Inside, the living spaces feature a three-sided, storefront-like glass enclosure offering views to the south, west and north, with large sliding doors leading to the deck. The open plan of the kitchen, living and dining rooms is punctuated by a two-sided fireplace, which separates dining and living areas. Skylights on either side allow light to bounce off the surface of the chimney volume. The L-shaped kitchen has a 12-foot-long island, topped in Namibian white marble—the same material used for both fireplace surrounds. 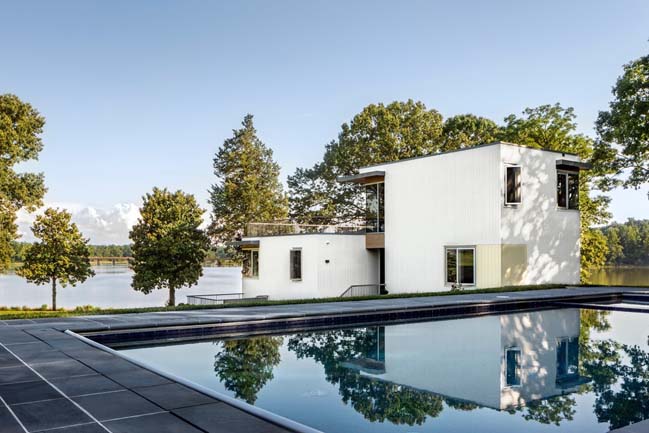 Adjacent guest bedrooms are located at the eastern end of the first floor; each offers sweeping waterfront vistas. The bathroom for one of them doubles as a powder room for guests. 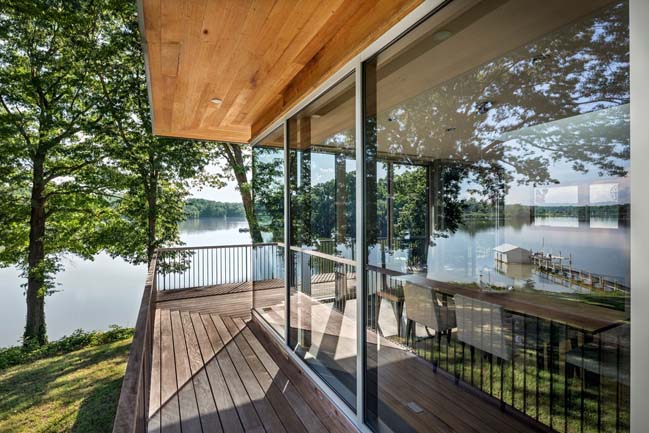 The den wing has been extended to incorporate an interior stair leading to the new second floor master suite. In the master bathroom, the tub is raised up two steps in the northwest corner of the bathroom to afford bathers a multidirectional treetop view. A skylight over the bed washes the yellow wall behind the headboard in light. Outside, planted rows of herbs and flowers comprise a “capsule farm” on the rooftop. The flora delineates an outdoor seating area while giving the master bedroom added privacy. 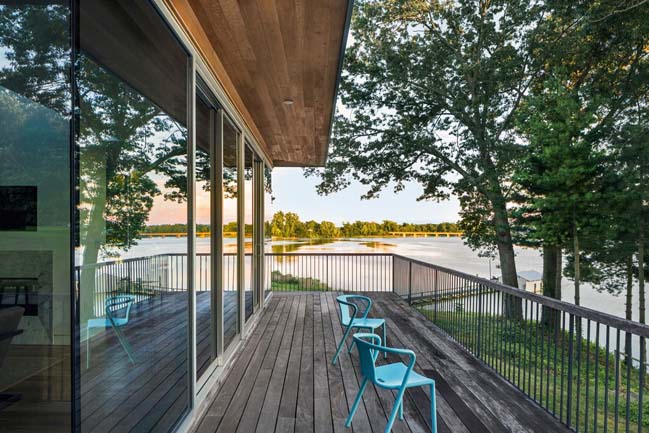 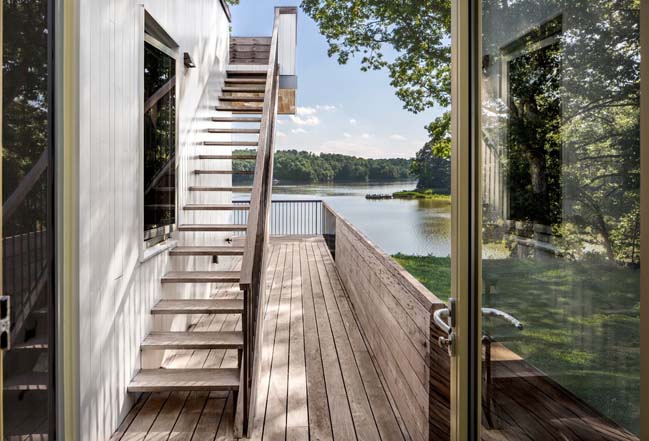 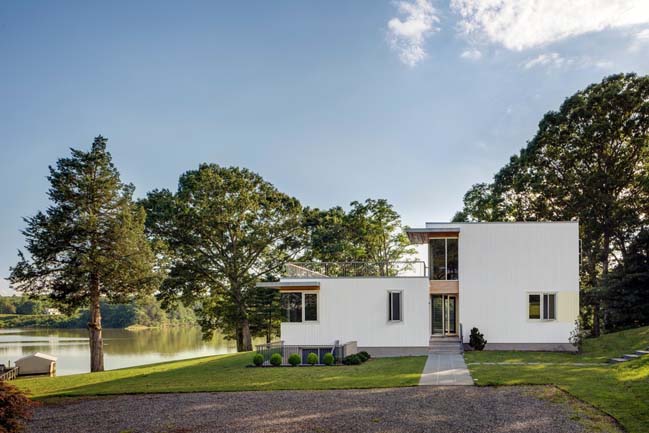 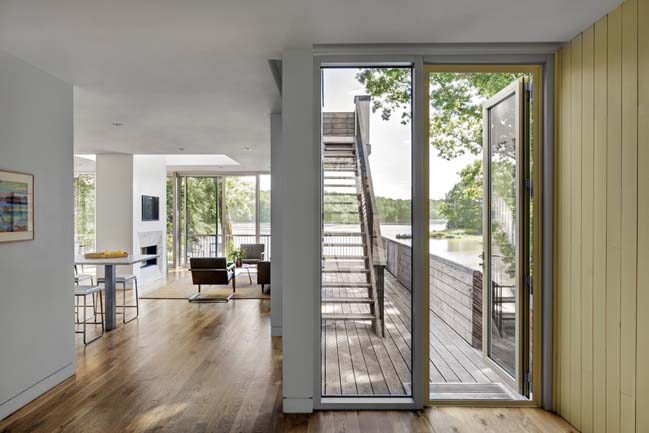 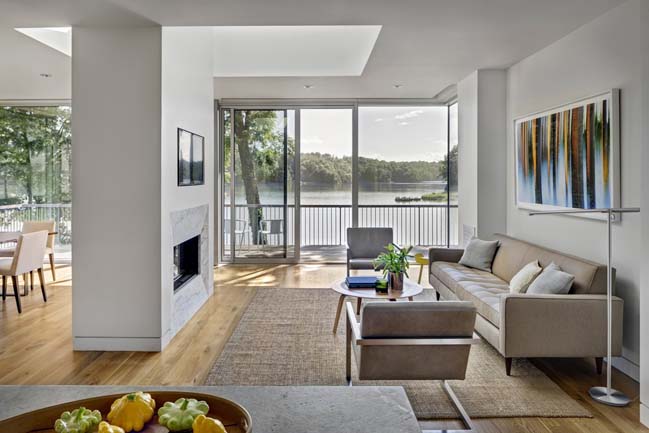 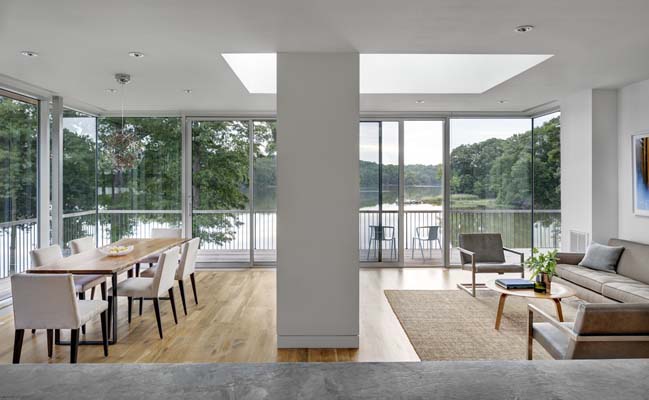 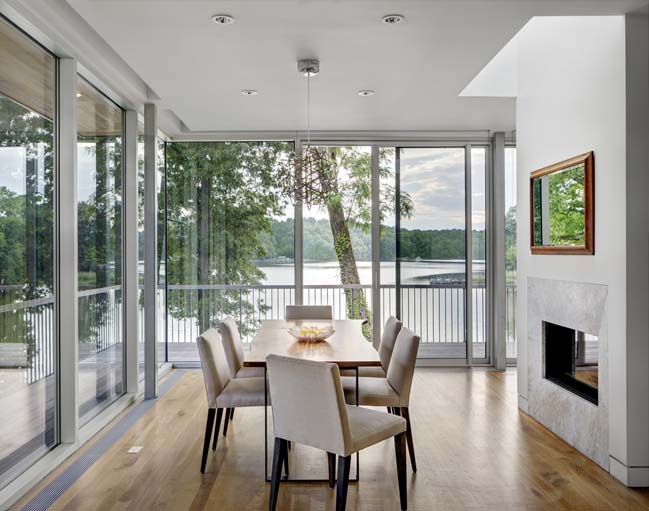 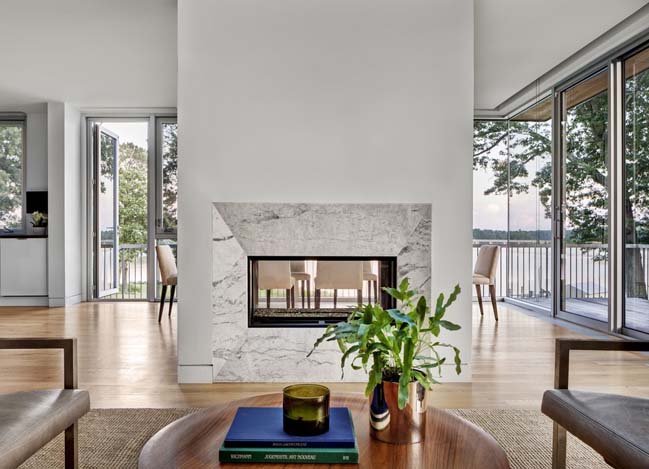 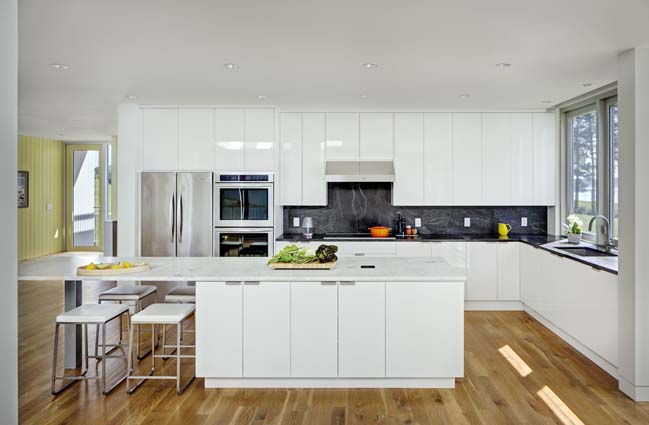 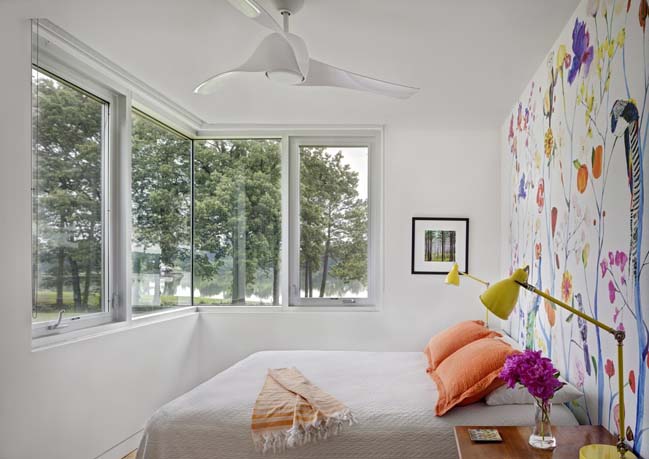 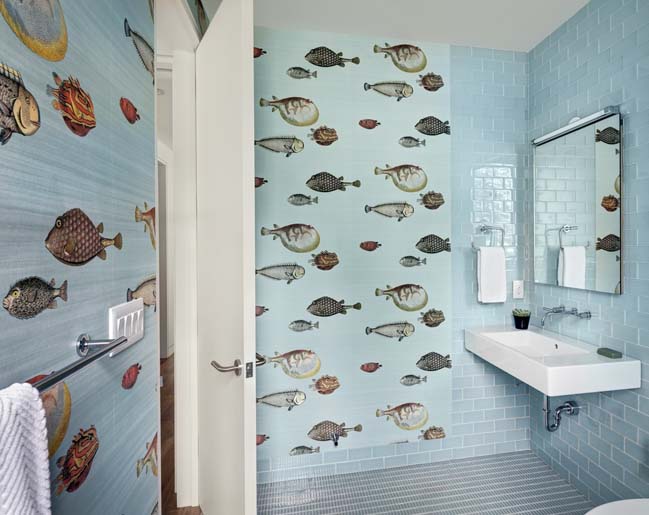 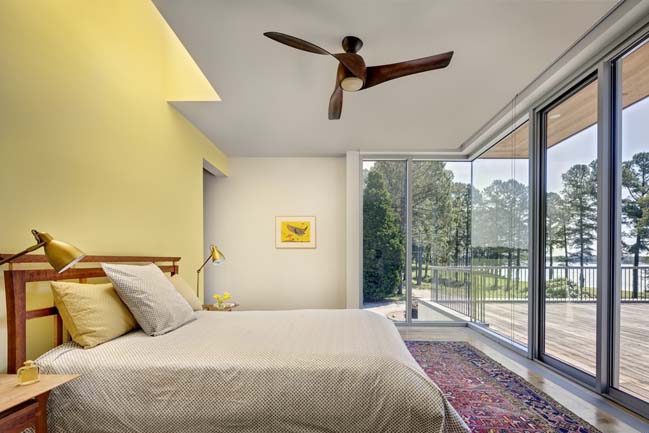 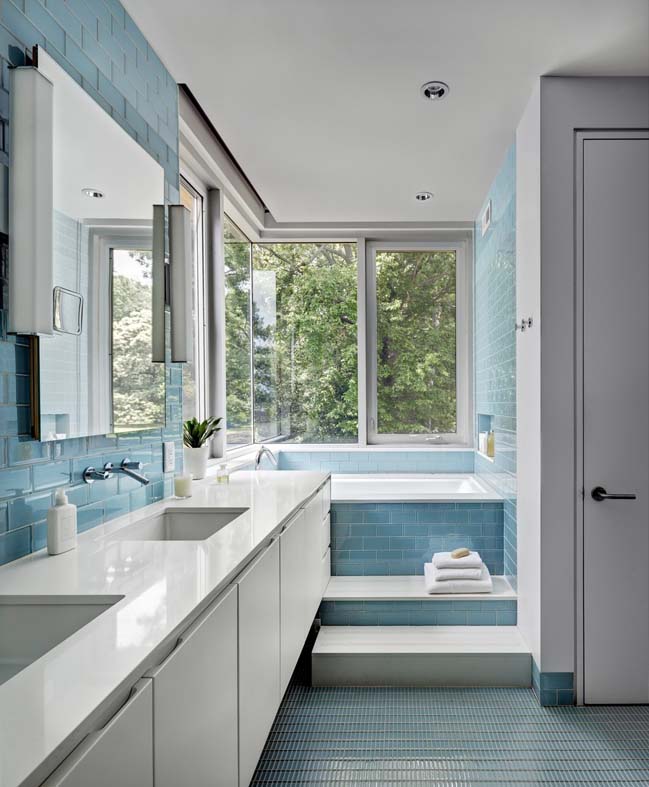 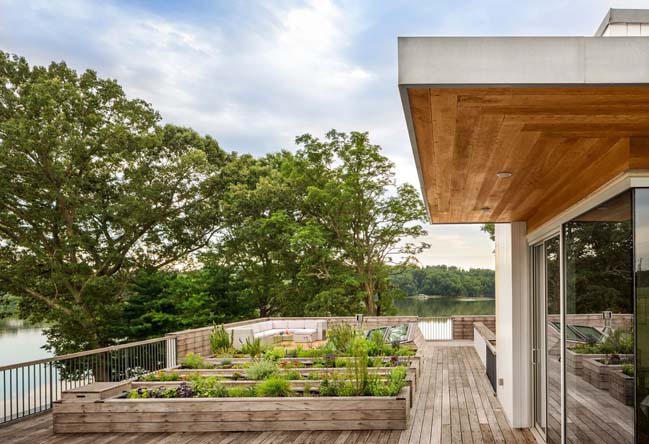 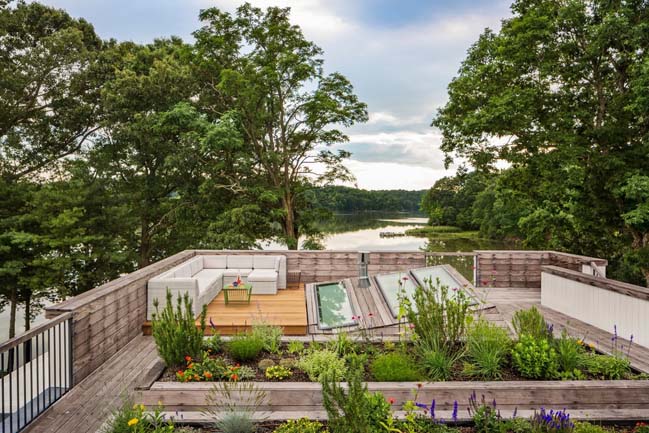