Completed by Studio Lagom. The H-Cube House in Surat strikes a contemporary and modern note in a nondescript urban milieu. 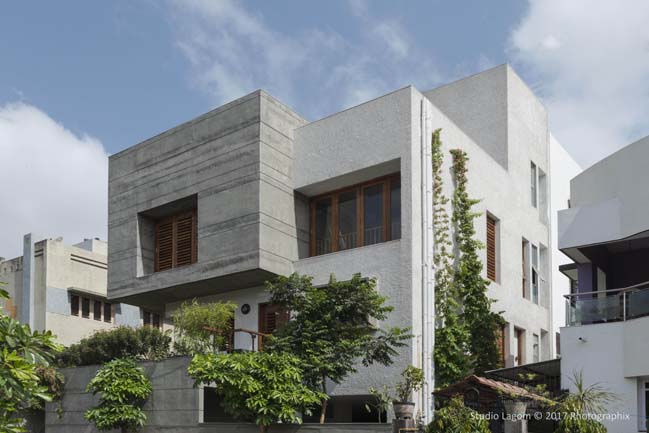 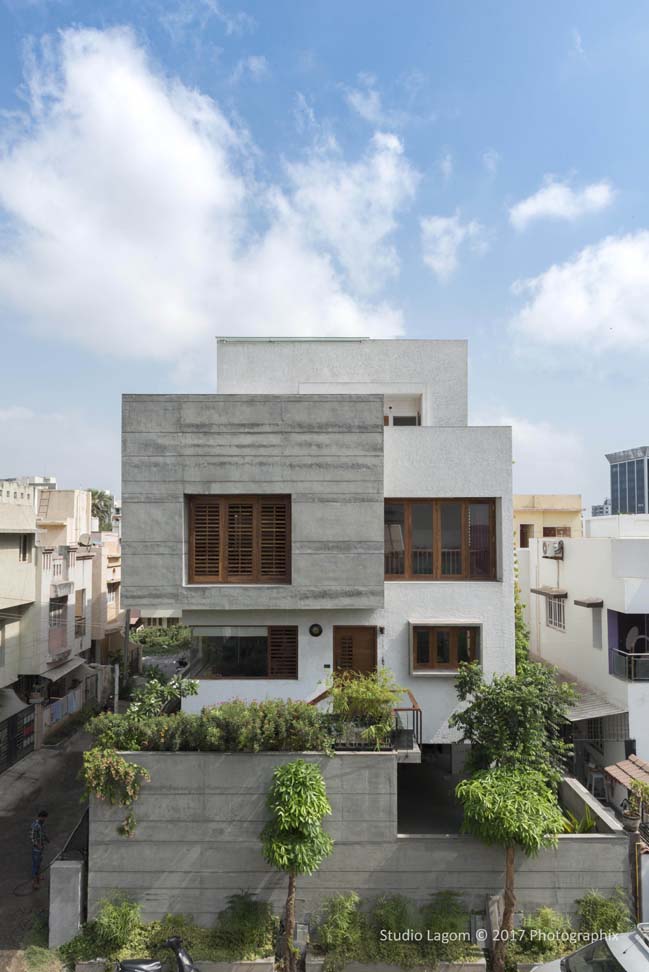 From the architects: Bagged with the help of positive word of mouth, this assignment came almost immediately on the heels of a larger villa project that was more than 10 times the scale of the present project. And that was precisely what was attractive and challenging: its compact size. The site was a 35’ x 35’ corner property in a densely populated community of urban Surat. The square dimension meant the absence of a long axis that could have otherwise been used as a base for spatial articulation. The exercise thus became centered around as much creating a good space as proving to ourselves that we had the capability of surmounting the challenges posed by a small scale and its detailing. 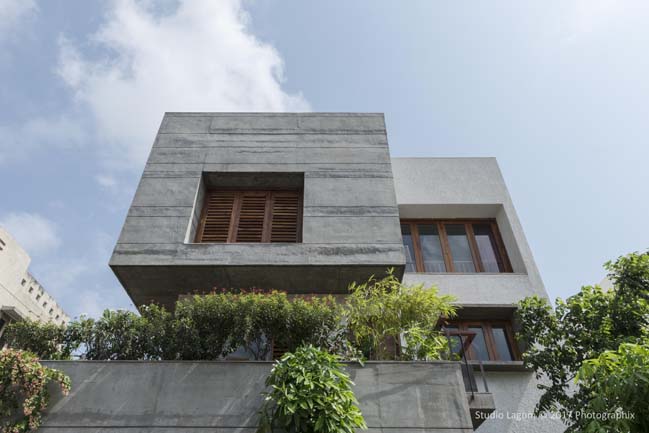 The footprint of the house, after leaving out regulation setbacks, was approximately 25’ x 25’. Within this square was a set up a grid that finally yielded three rectangular blocks: two of 10’ x 25’ and one of 5’ x 25’, with the smaller block allotted to circulation, services and storage. The house can be accessed via a discreet, tunnel-like and narrow staircase nestled between the wall of an elevated garden block and that of the structure, a deliberate attempt to move away from the open-to-public-view staircases seen otherwise, with little or no thought behind their design. 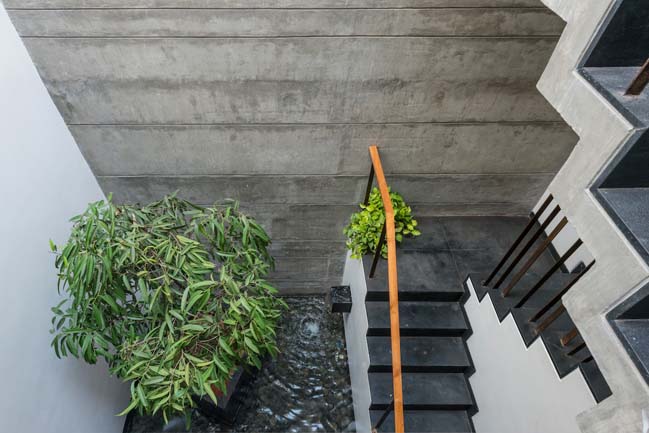 Architecturally, the form is derived by cutting up the structure (specifically, the levels that house the living spaces) into four cubes, and shifting one quarter (on the upper level) out, to create a cantilevered block. A shift in material (concrete as opposed to white paint) distinguishes this volume further. Within it, is housed the master bedroom. The elevation also strikes an equilibrium between solidity and lightness; opacity and transparency. Below the cantilevered concrete block of the master bedroom, for instance, is a long L-shaped puncture spanning the two walls of the living room. 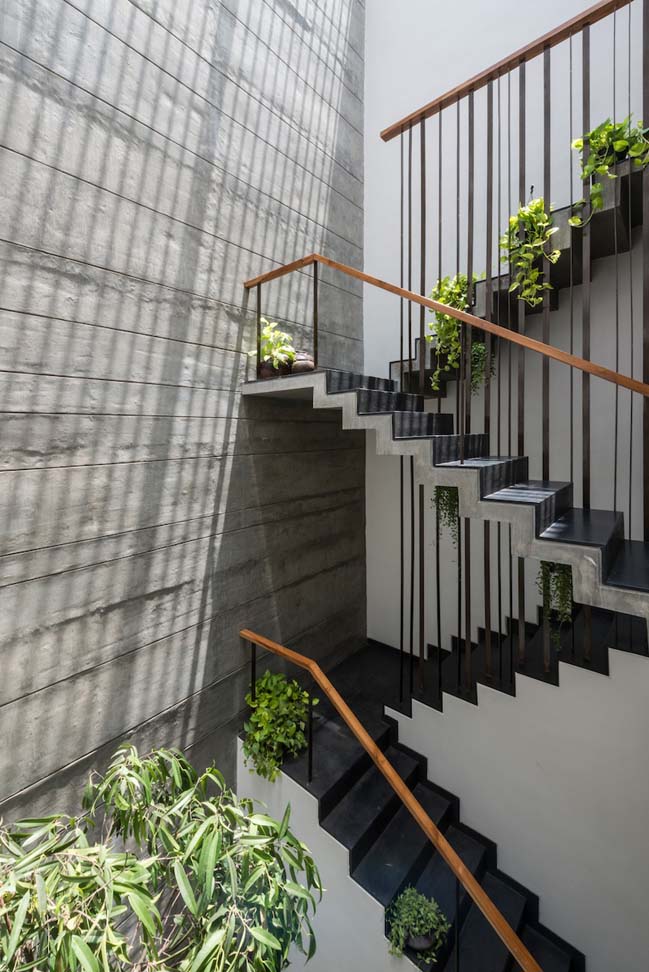 The internal zonal articulation is also as simple, with a distinct horizontal delineation of semi-private and private zones. The semi-private zone (living room, kitchen and dining) is housed on lower level, with two bedrooms being situated on top. The street level is devoted to a car park.  The constituent spaces of the semi-private zone are arranged in a C, with the dining forming the connecting element between the other two. The living room and the kitchen are separated by a large storage block which can be accessed from all four sides.  On the level above lie two bedrooms on either side of a landing. 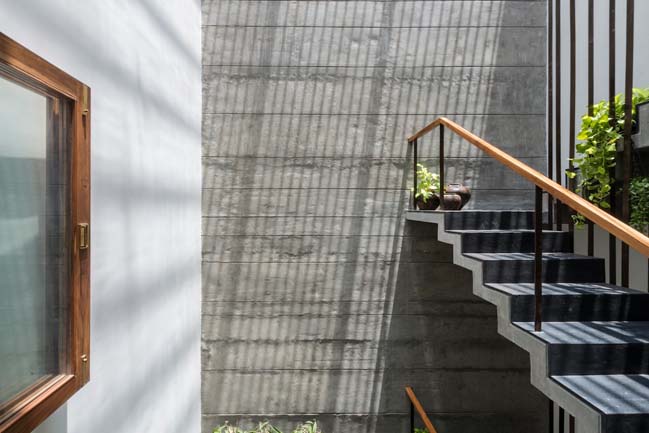 The living room of the H-Cube House is essentially an open space brightened with a slit-like L-shaped window. A cordon of green outside filters the urban chaos and endeavours to create a feeling of serene seclusion. The dining area brims with earthy warmth, thanks to wooden furniture set on rough Kadappa stone. The exposed concrete ceiling prevents the space from slipping into the clinical. The sense of calmness on the lower level is further heightened by an internal waterbody complete with a cascade and tiny island replete with plants, that has been created in one corner of the living room. A hichko, a staple of every Gujarati household popularly seen on verandahs or patios, makes an appearance in this internal version of a verandah. This triple-storey courtyard is actually part of a strategy to establish visual linkages and connections, to avoid a feeling of being hemmed in and isolated. This light- and air-well connects both the levels, invites natural light into the space via a skylight, and, at its base, functions as a water court that imbues the space with serenity. With the staircase abutting the triple-height volume, this space is faintly reminiscent of the step-wells of yore. One level up, the master bedroom, which faces the main road, also opens into this void, establishing important sight-lines to the lower level. 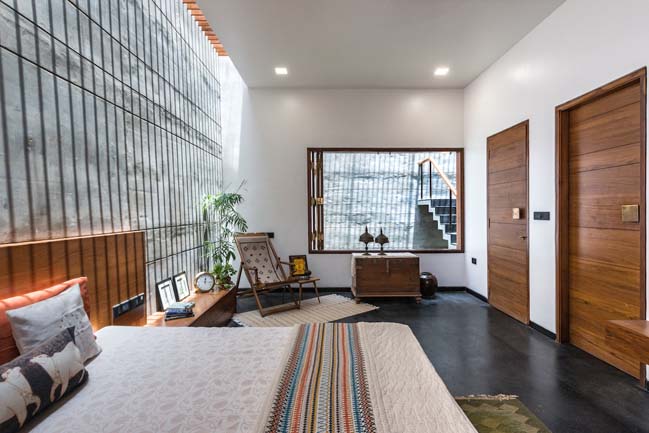 Aligned to the client brief, the colour scheme is neutral and the material palette, minimal. Exposed concrete, white plaster, black limestone and teakwood are the mainstays of the unobtrusive shell, which is then overlaid with bright (but not overly so) soft furnishings and accessories. The materials have been deliberately left bare, bereft of any cosmetic additions, to let their purity shine through. 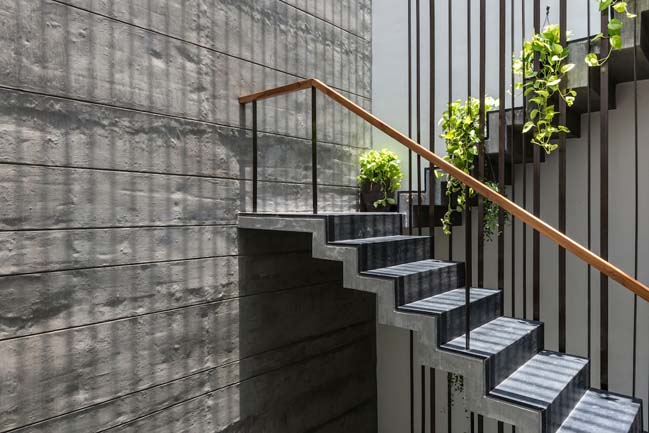 Given its location, the house necessarily became an introvert one. The connections to the outside became discreet, shielded… which meant that ventilation had to be carefully resolved. Louvered windows in the south-west corner (on both levels) allow cool breeze in, while the warm air escapes through the vents of the skylight and windows along the eastern face. Additionally, the master bedroom has been given a slit-like skylight just above the bed, which creates a living artwork on the exposed concrete wall, with the sciagraphy that plays through the day, and indeed, across seasons… Given these daylighting strategies, the dependence on artificial light is minimal, and mainly achieved through exposed and recessed spotlights. 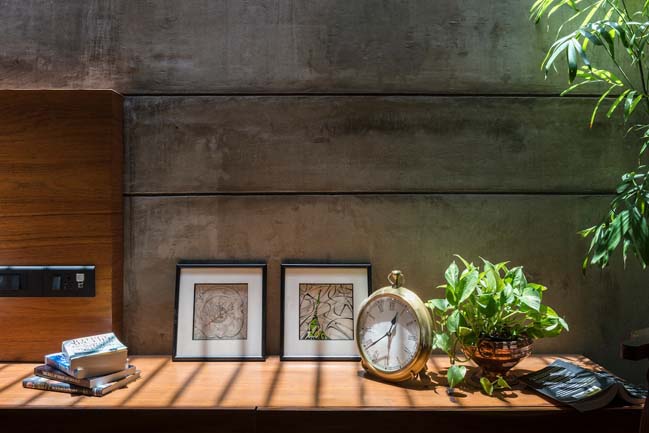 Creating H-Cube House, to us, has reinforced many beliefs: that size doesn’t matter; that there are always solutions; and that God is in the details… 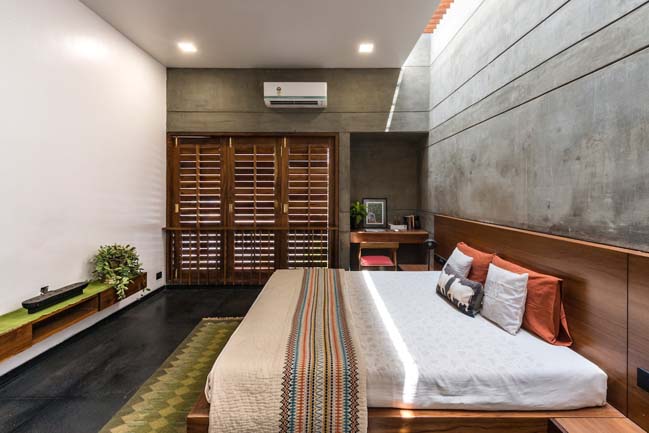 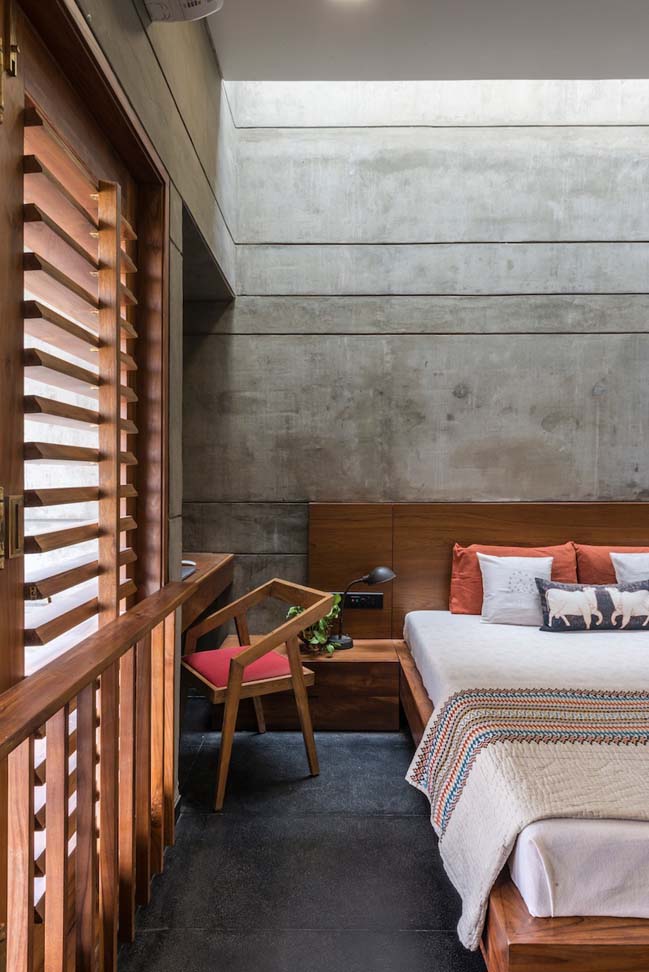 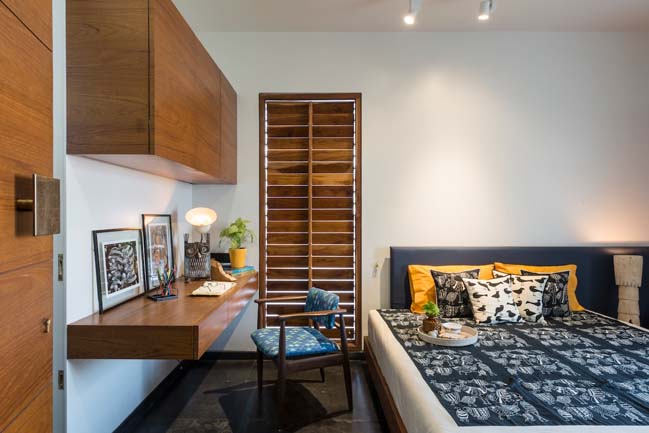 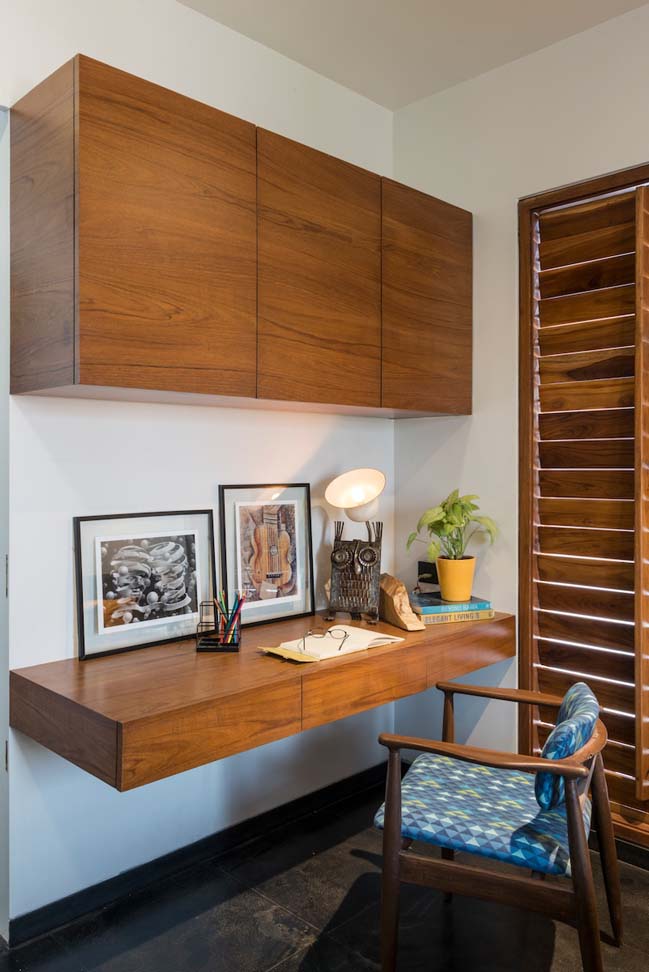 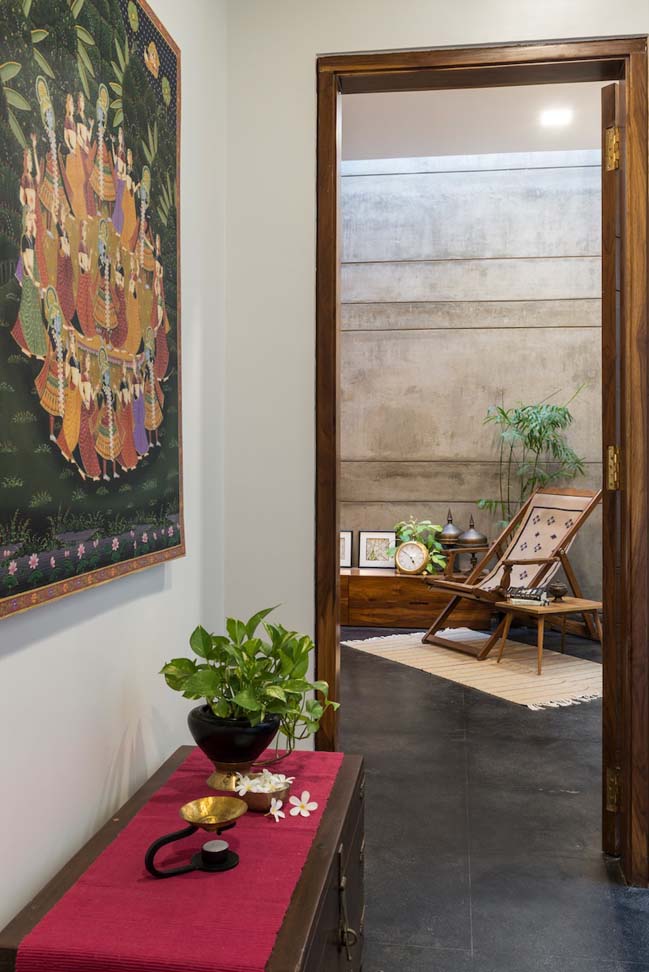 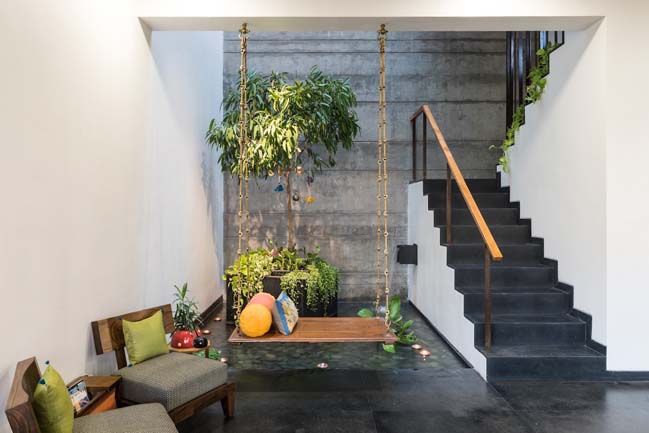 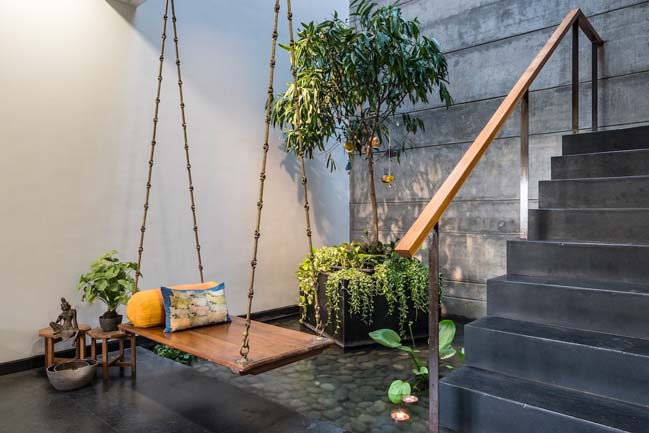 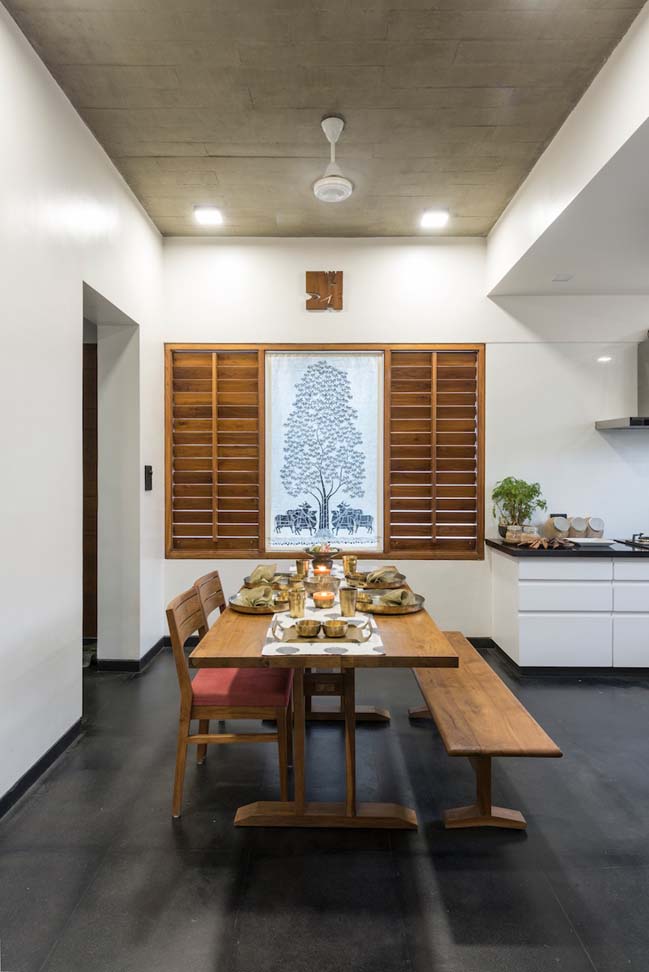 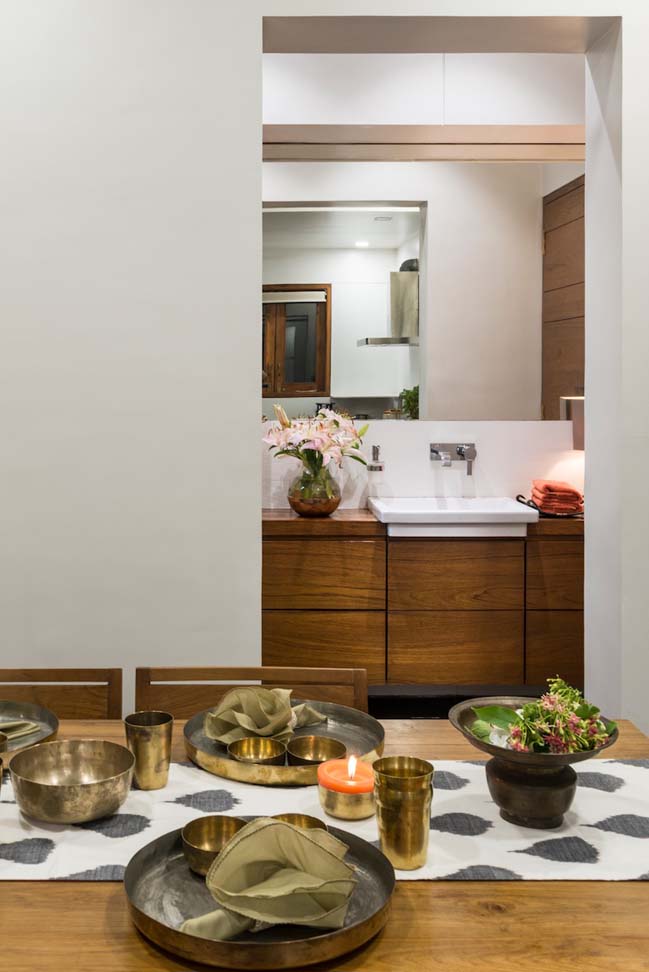 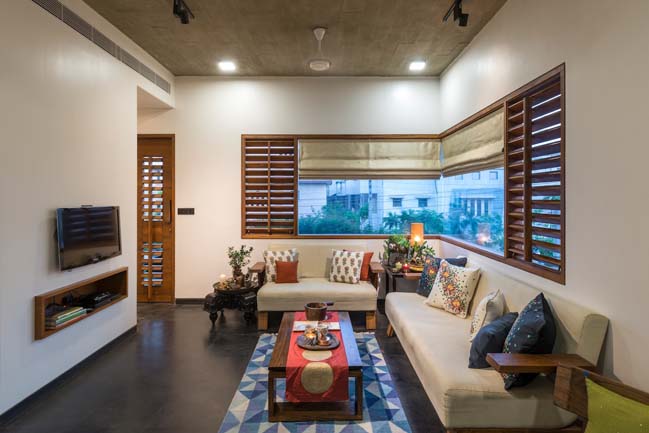 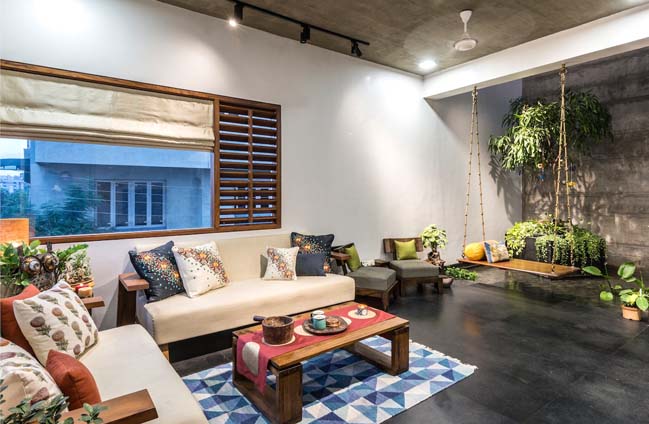 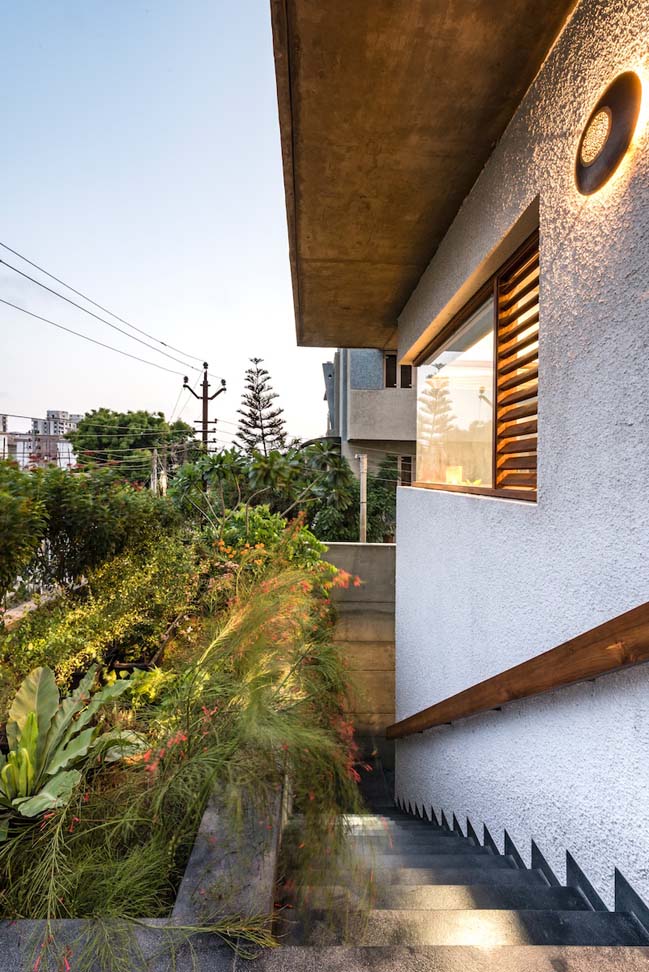 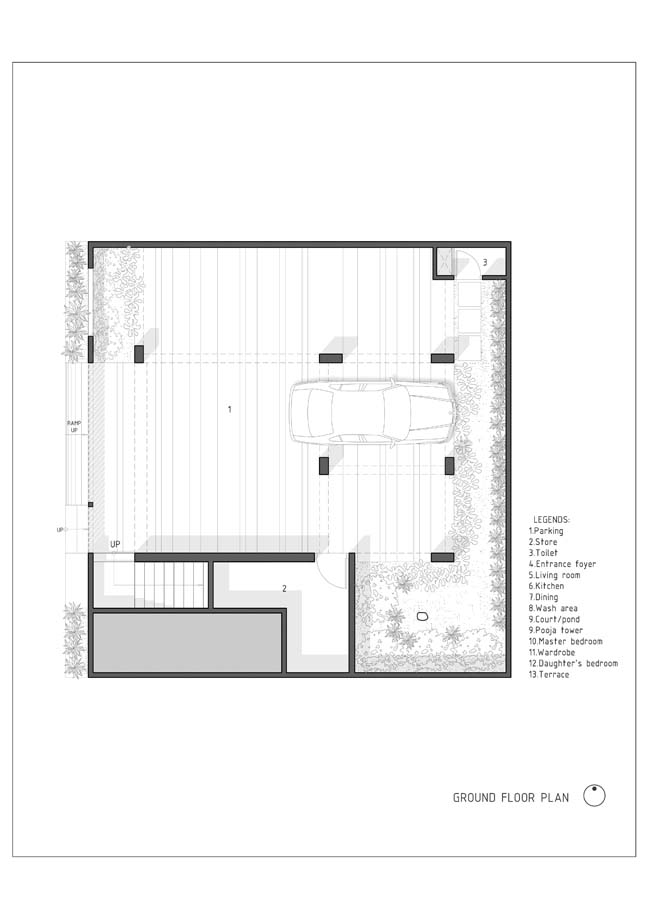 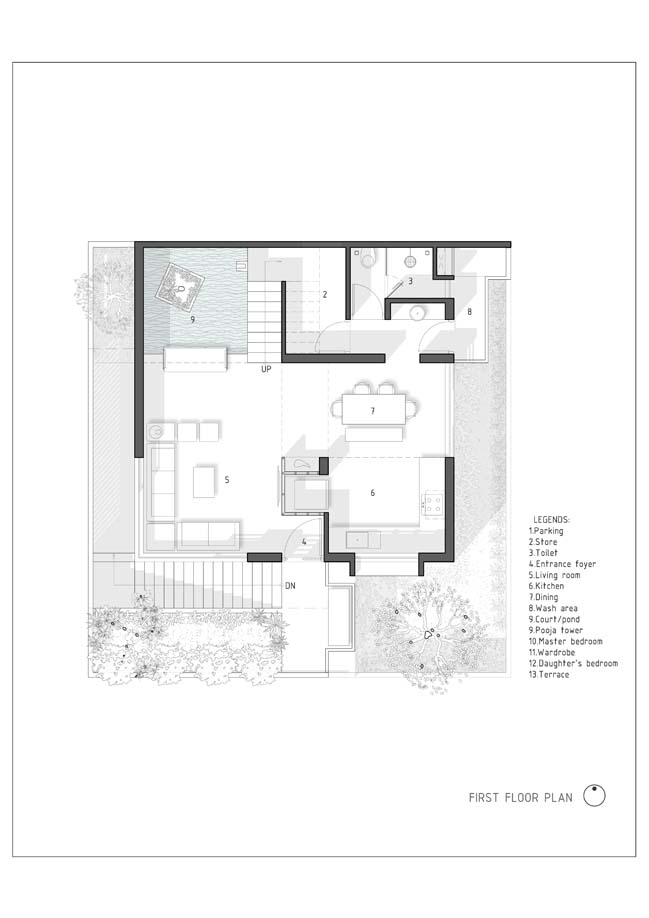 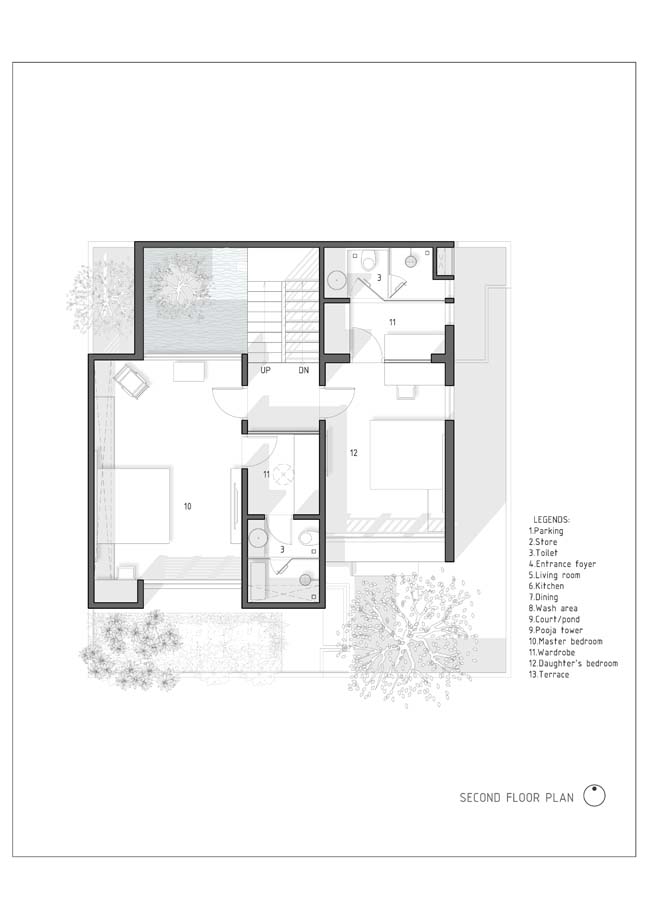 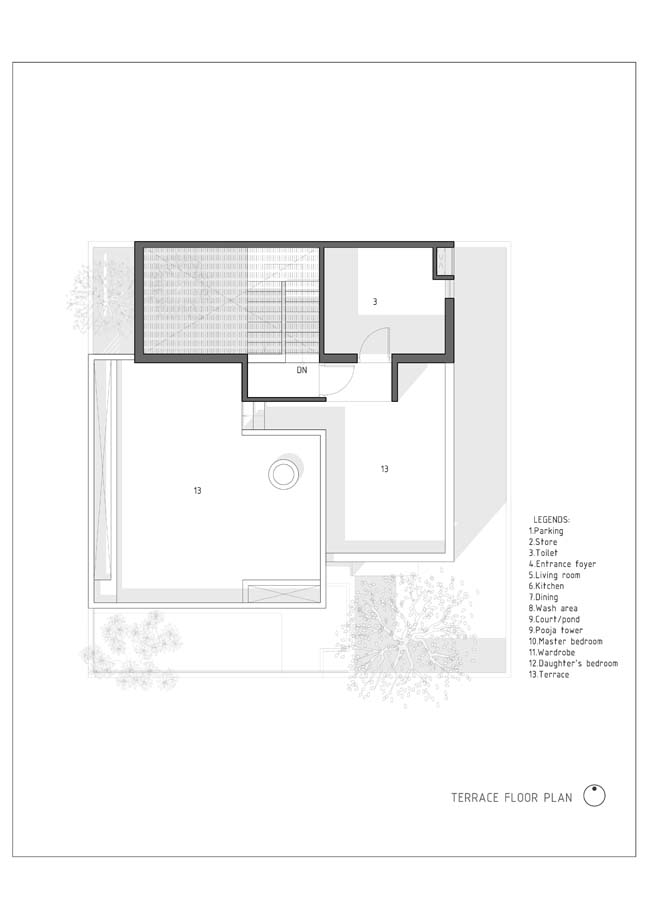 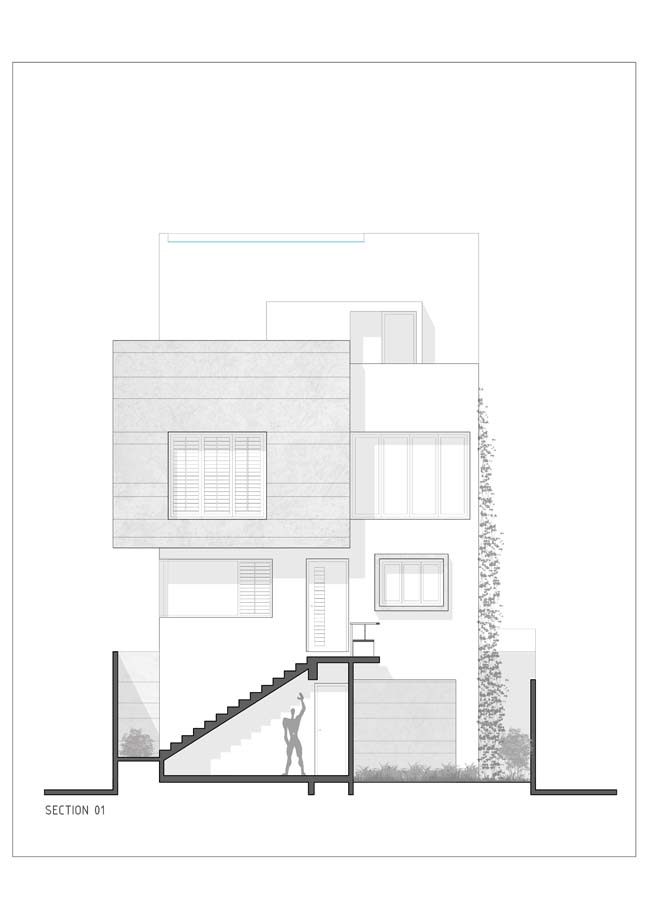 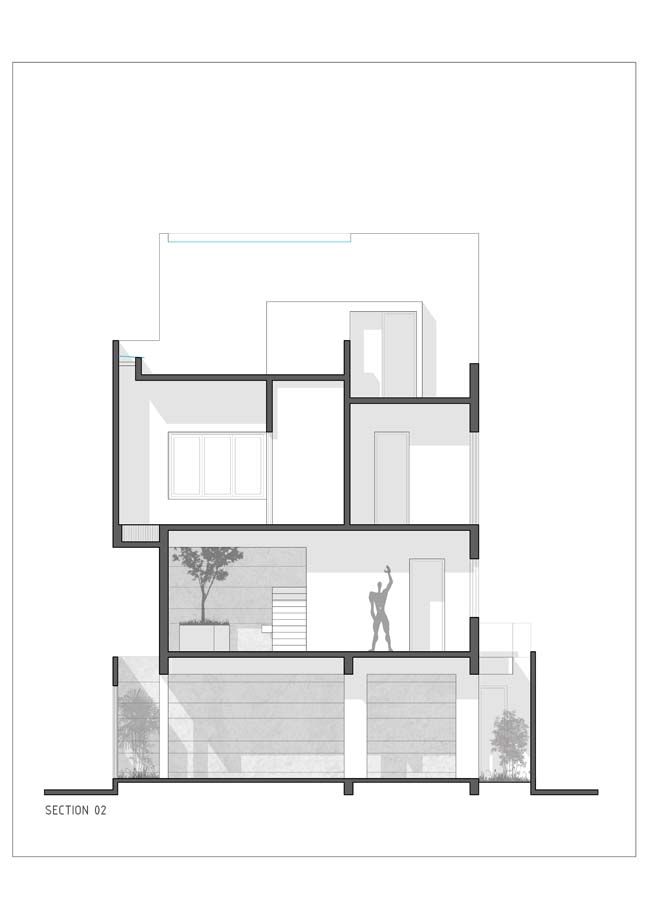 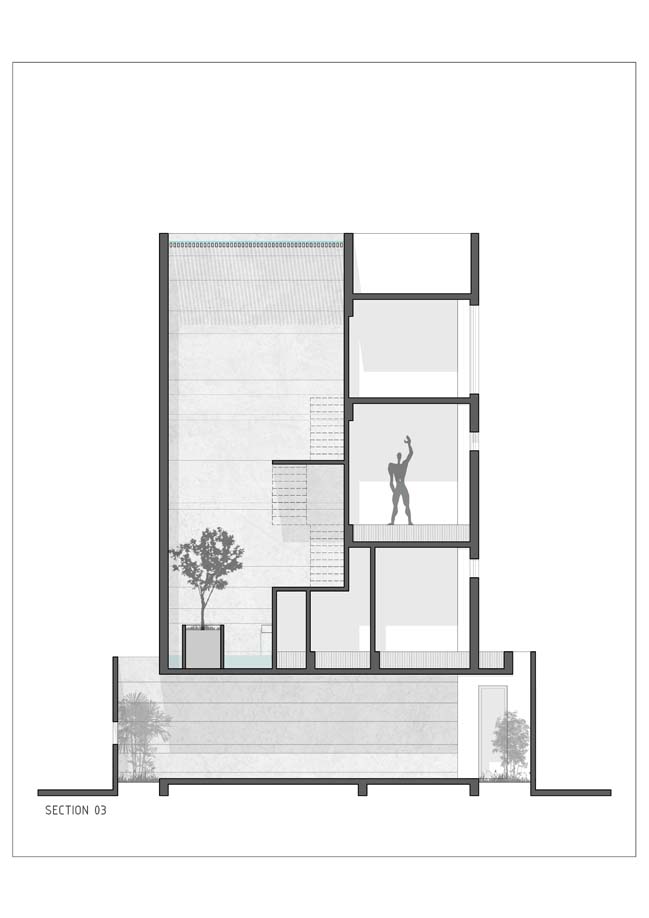 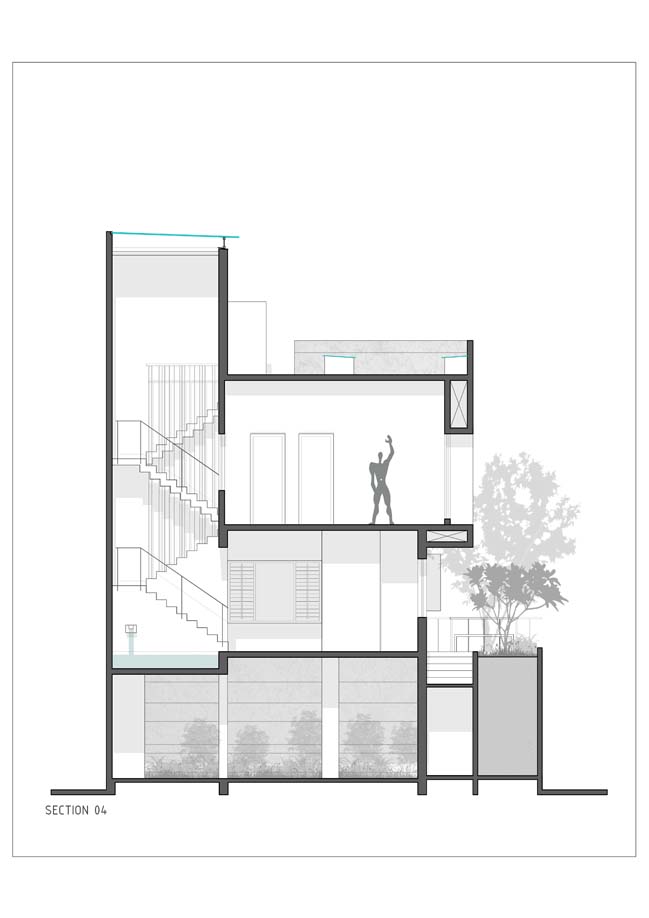 11 / 29 / 2017 Completed by Studio Lagom. The H-Cube House in Surat strikes a contemporary and modern note in a nondescript urban milieu