Located in one of the most exclusive areas of Moraira (Costa Blanca), a few meters away from the water of the Mediterranean Sea, a large prismatic concrete volume emerges behind sandy Portet Beach. 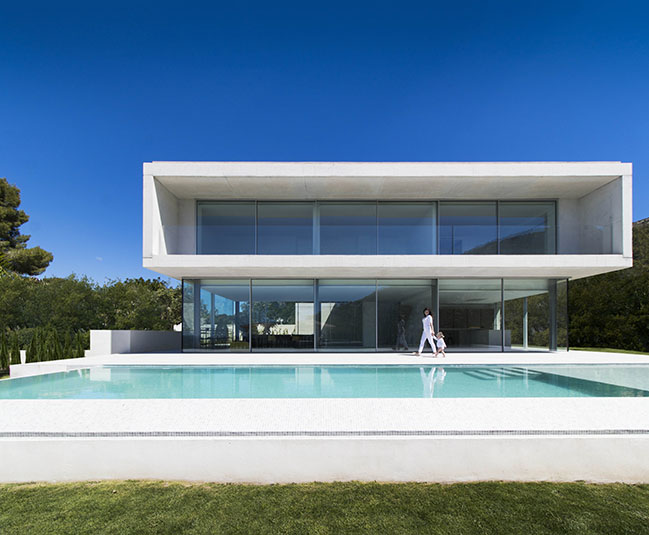 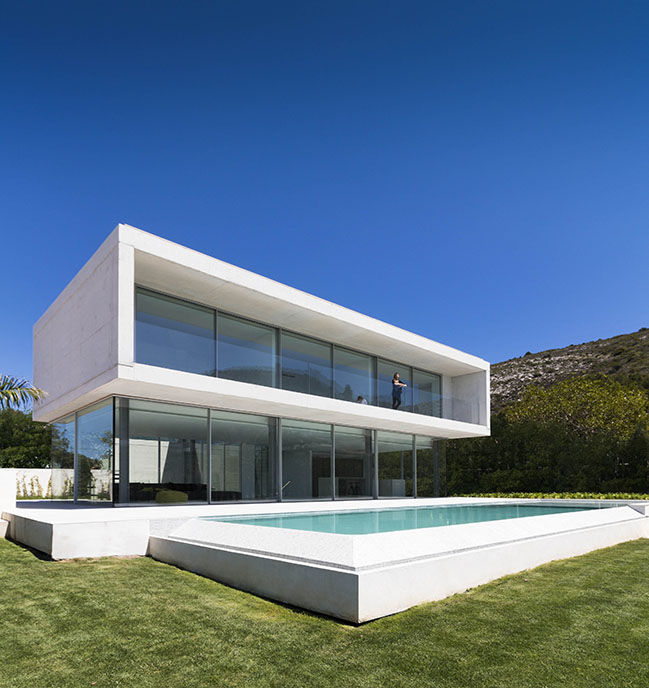 From the architect: The contrast of the brutal concrete giant on the thin and fragile glass, play opposites to surprise the observer. The body that emerges seeks to camouflage itself with the texture of the landscape and its surroundings. 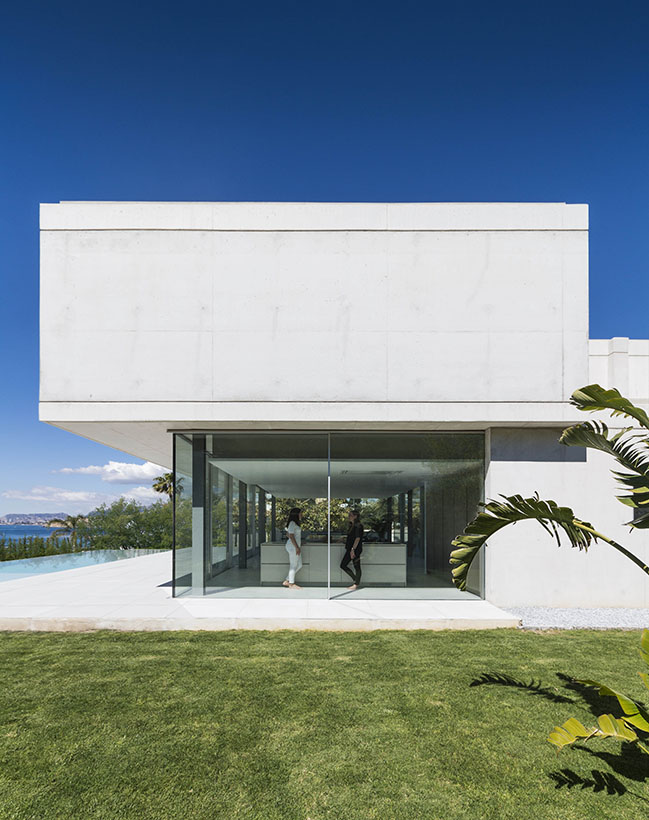 The house is organized by three clearly differentiated heights. Where the stairs, the vertical garden and the courtyard are the common link between all levels and articulate the spaces according to their need of privacy. 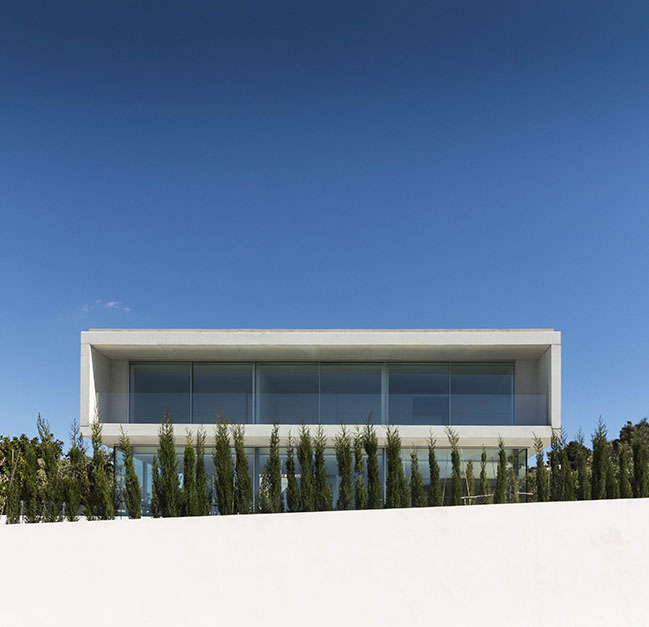 The ground floor is the most open space of the house with large glass surfaces that allow the visual and functional extension of the interior spaces to the exterior areas, which is positioned to the fantastic views towards the Mediterranean sea and its surroundings. On this floor the day area or more public spaces of the house are located: the living room, the dining room and the kitchen are located in a single open space closely related to the overflowing pool that merges with the sea. An extra bedroom and bathroom complete this floor. 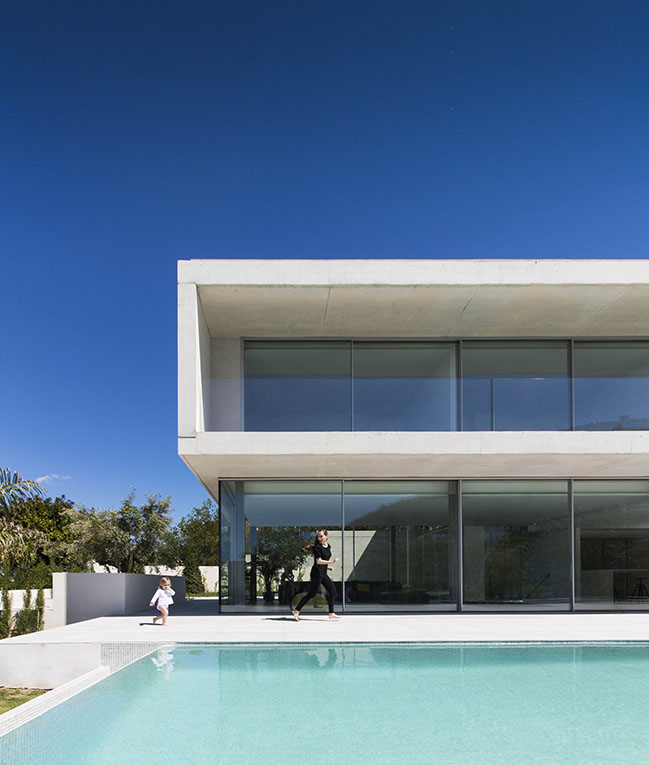 The first floor locates the night spaces or bedrooms of the house. Formed by a prismatic concrete volume open on one of its sides, heading to the south, where the best views are and also looking for the best natural lighting. This resounding volume gives privacy and protection to the spaces despite being totally open on one of its faces. 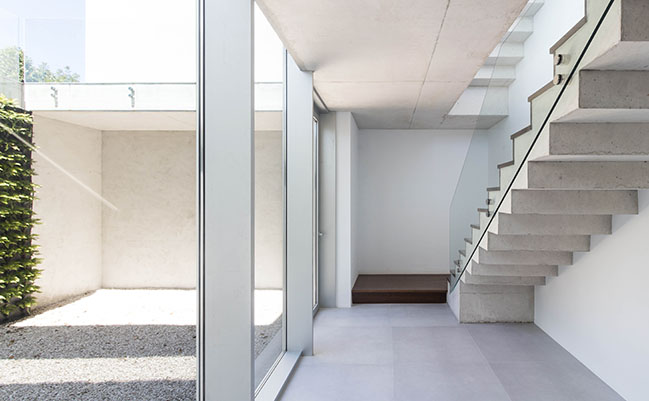 The basement is the most enclosed space of the house only illuminated by its own vertical garden and courtyard that provides light while privacy to the spaces that are located there. Giving importance to both, finishes and habitability, since it locates the leisure areas of the house as also the service areas and garage. 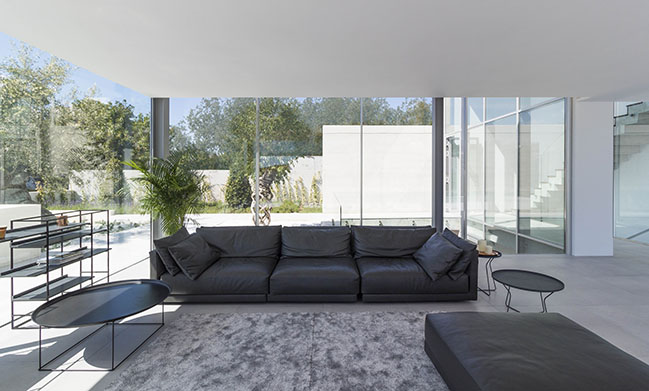 The architects propose natural materials, which emphasize the concept of a house that adapts to the landscape in which it is located and blends in with the surroundings. The materiality also reiterates the separation of public and private functions: the first floor is open and transparent composed of large windows and the basement is closed and dense formed by stony materials and openings directed to the patio of the house. 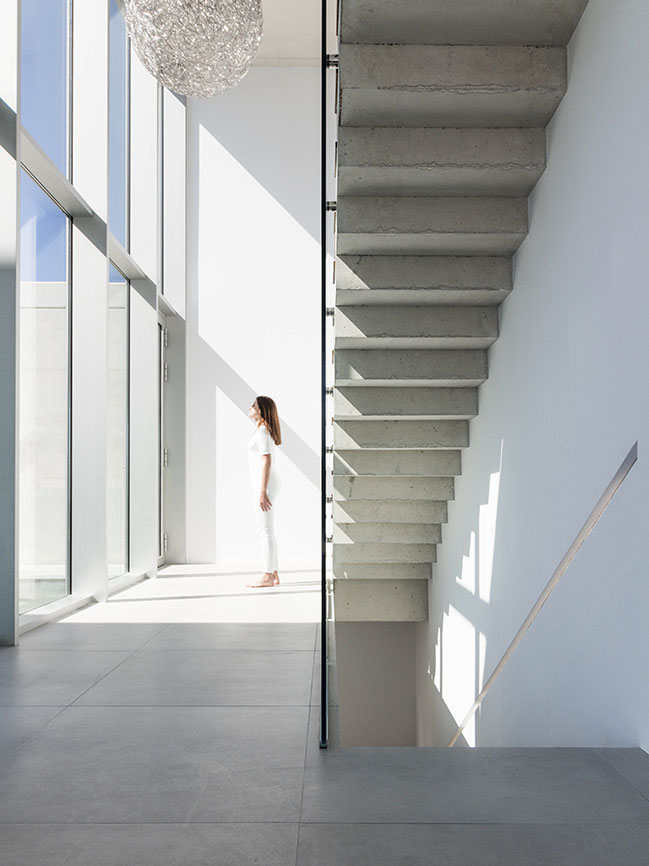 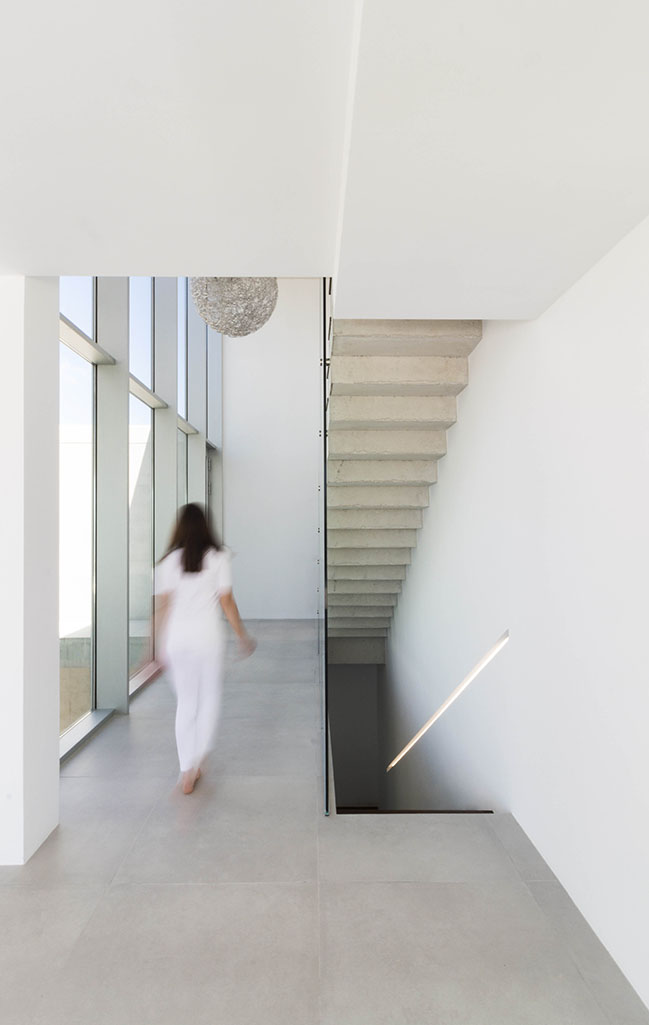 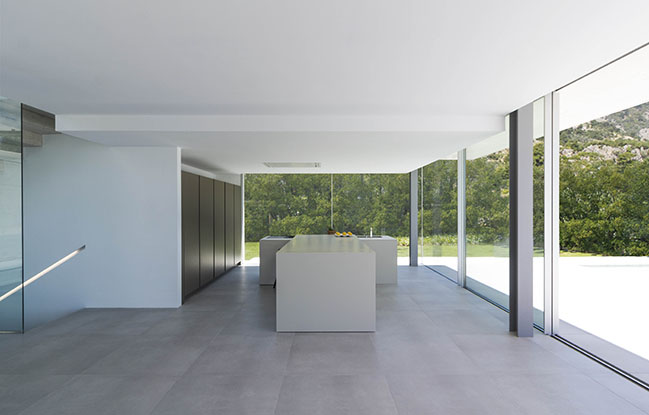 YOU MAY ALSO LIKE: House in Benahavis by Fran Silvestre Arquitectos 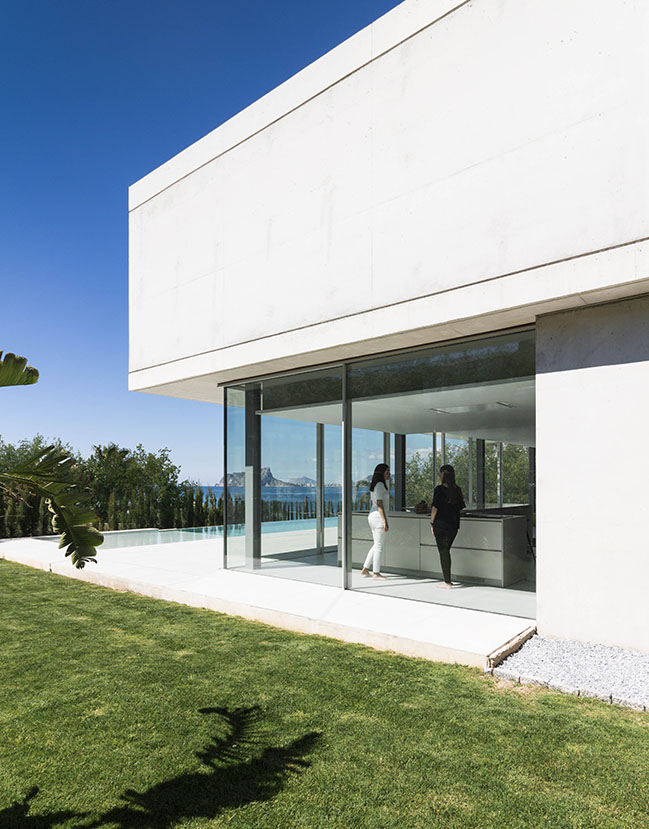 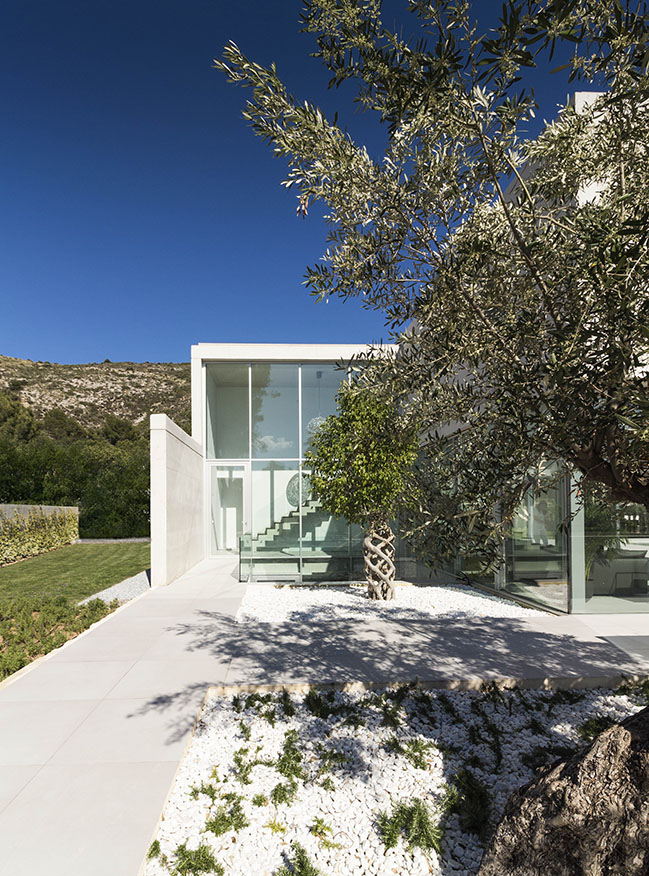 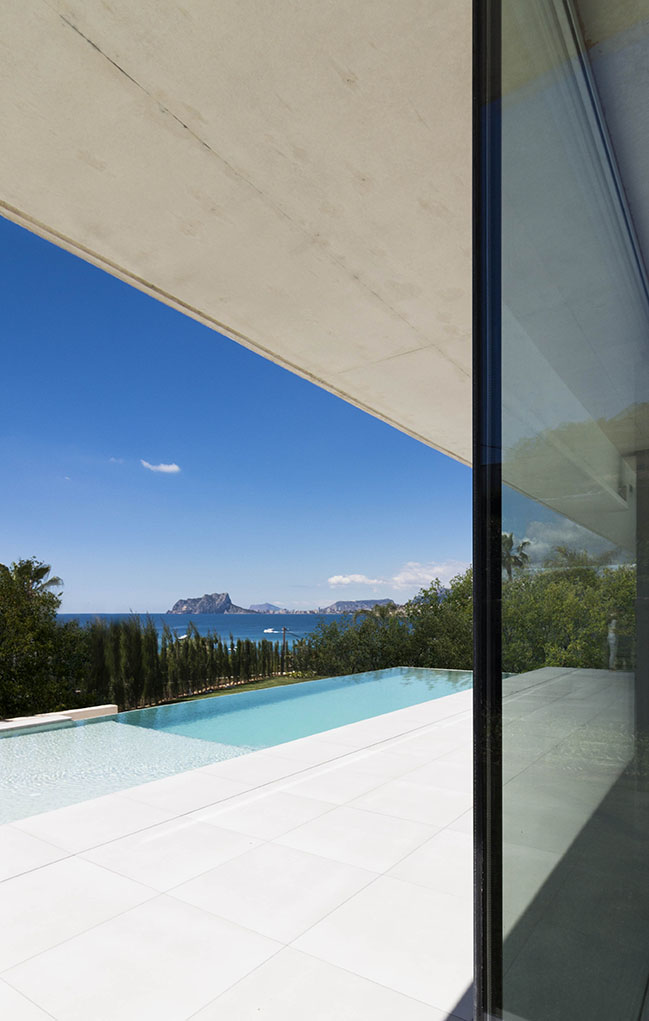 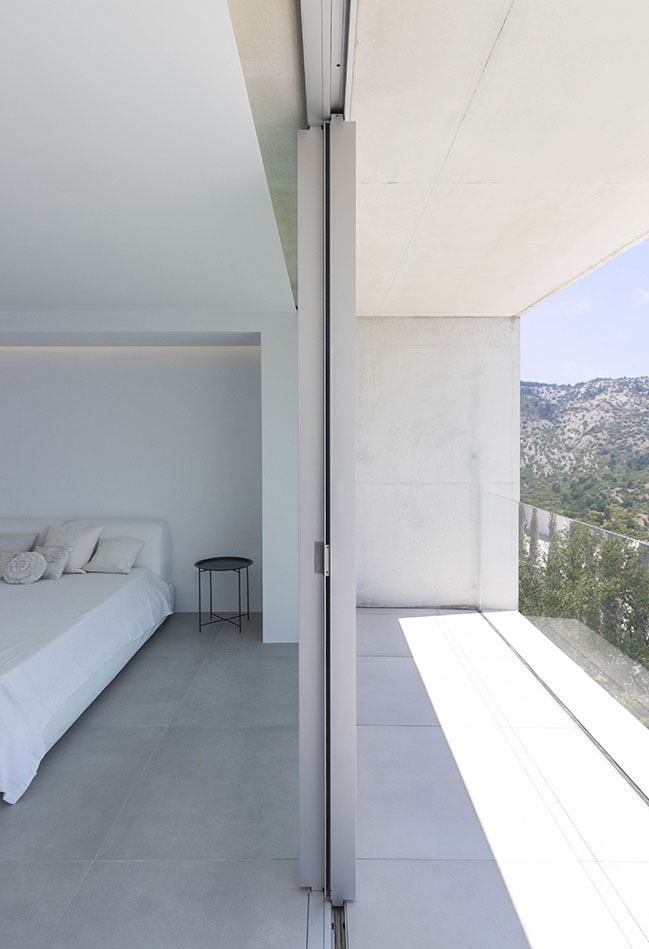 YOU MAY ALSO LIKE: Casa Nili by ZDA | Zupelli Design Architettura 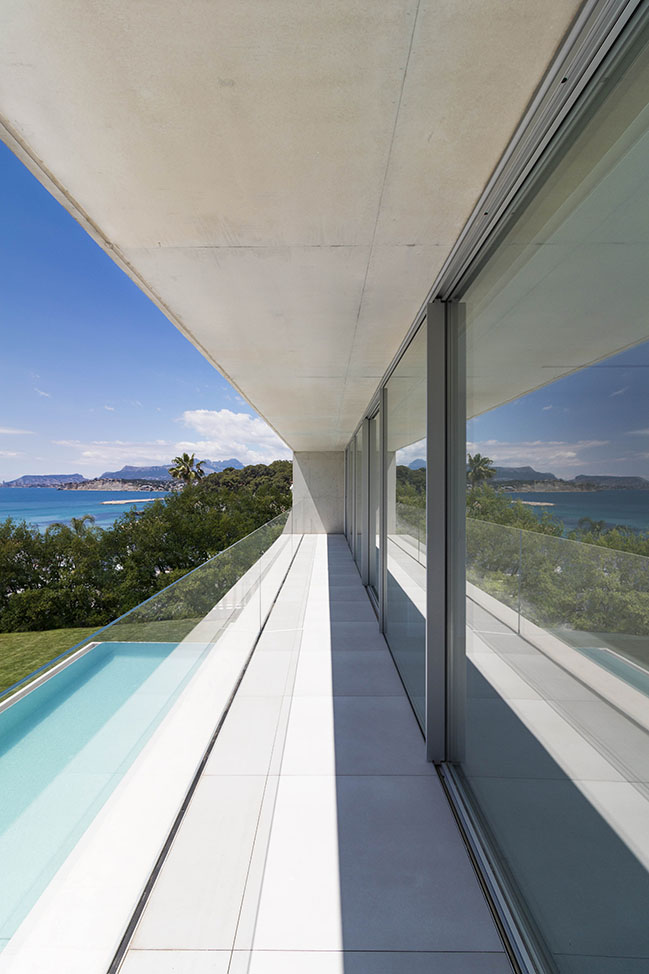 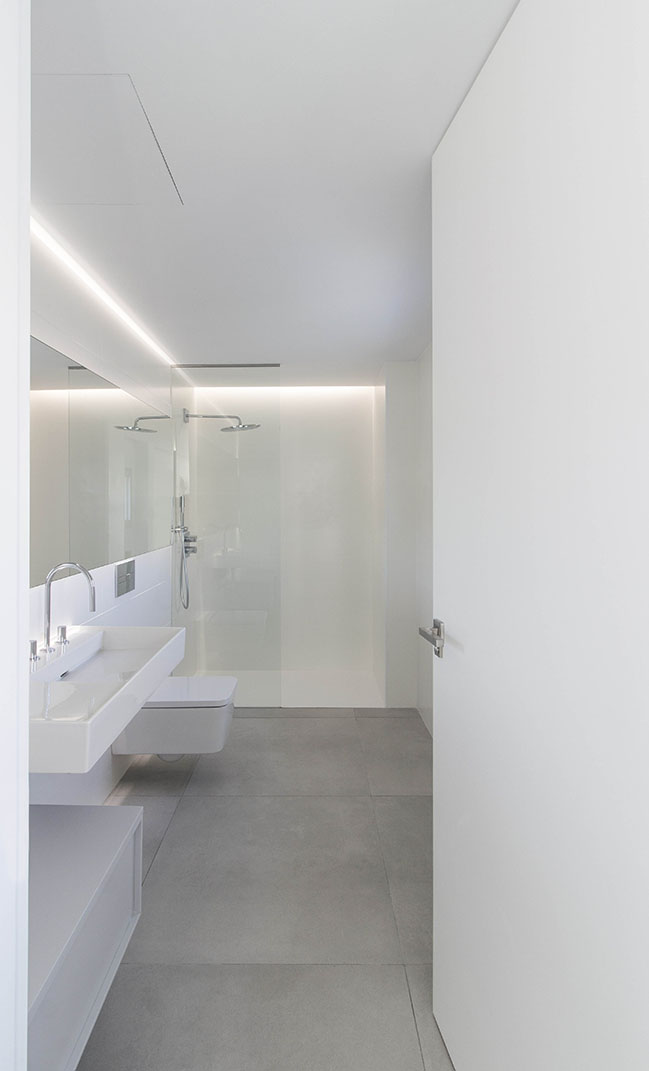 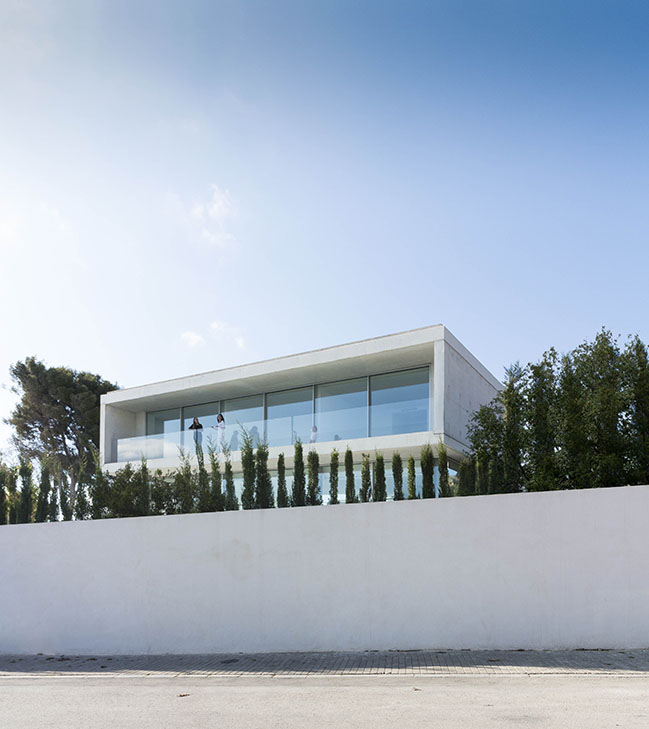 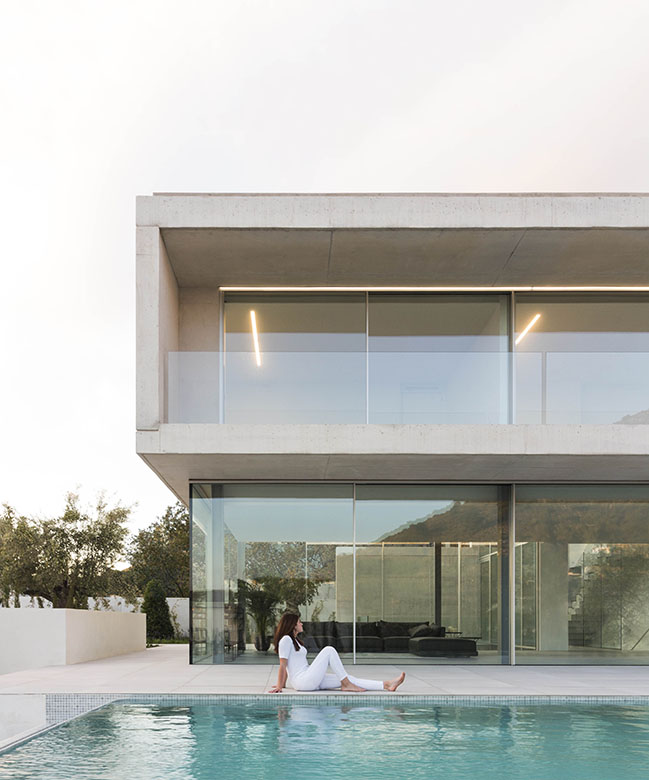 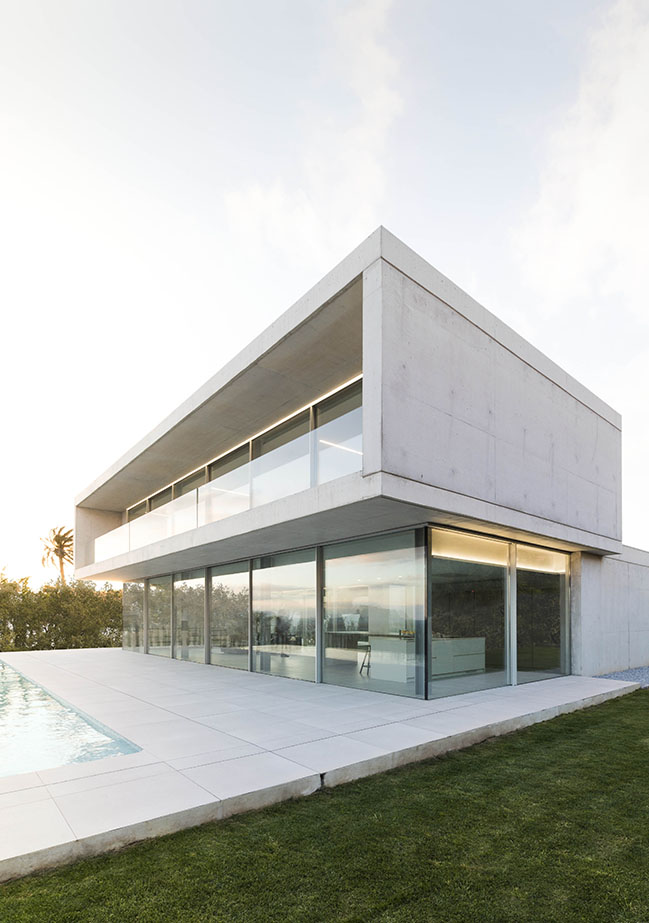 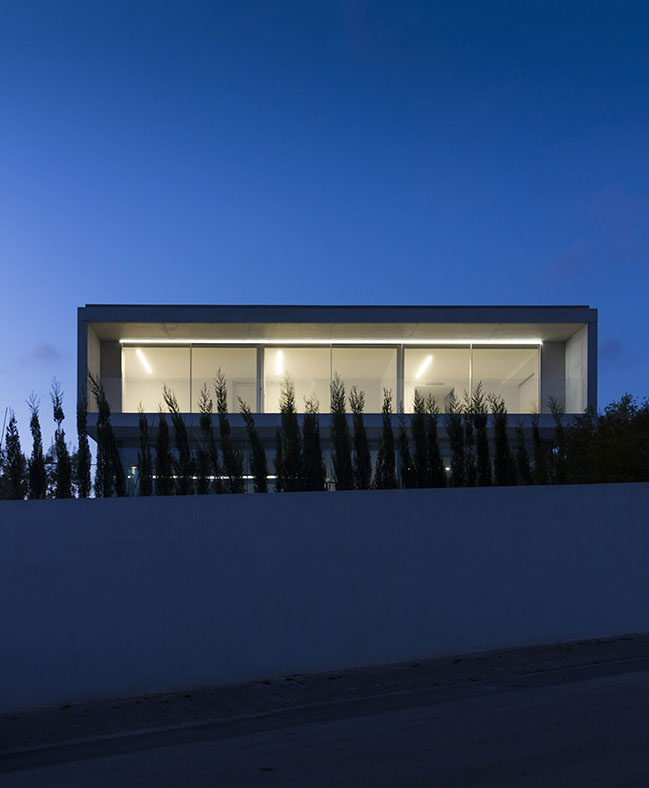 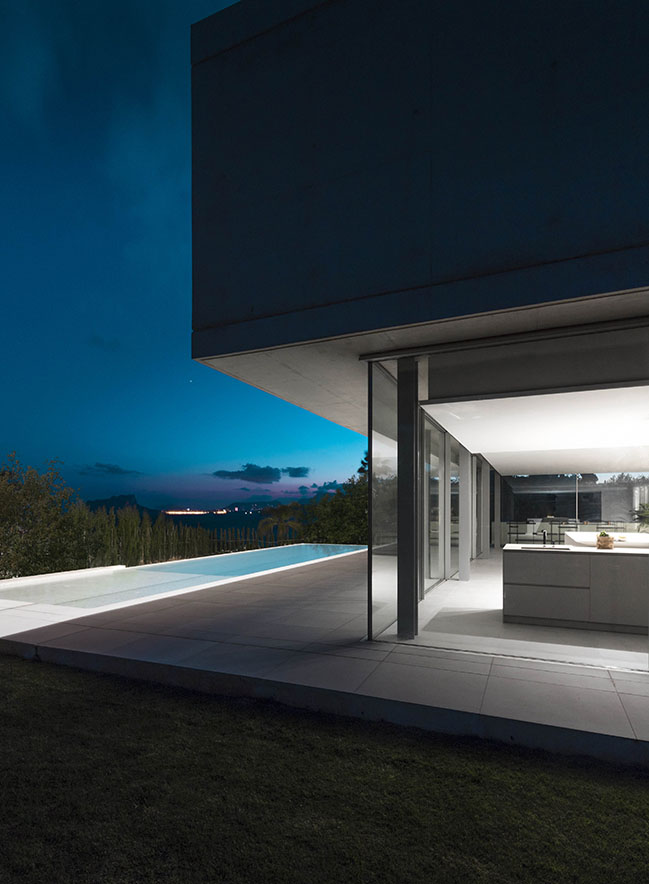 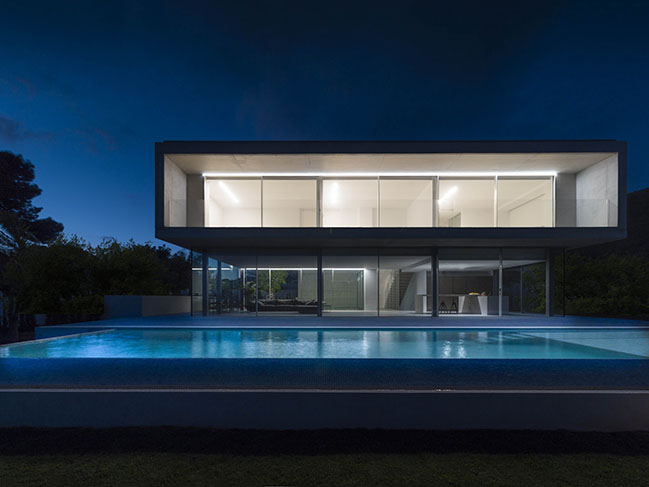 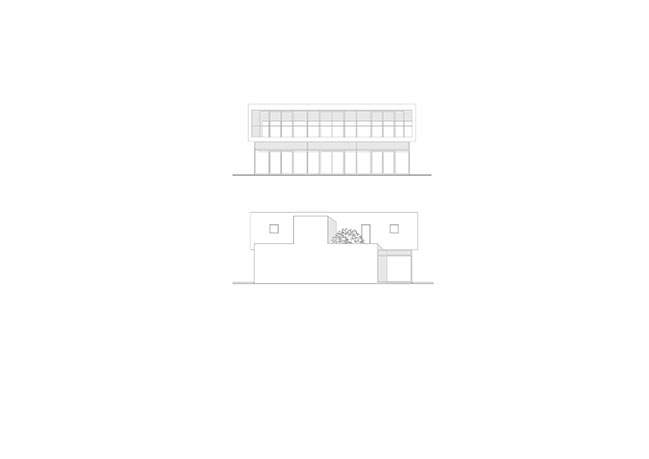 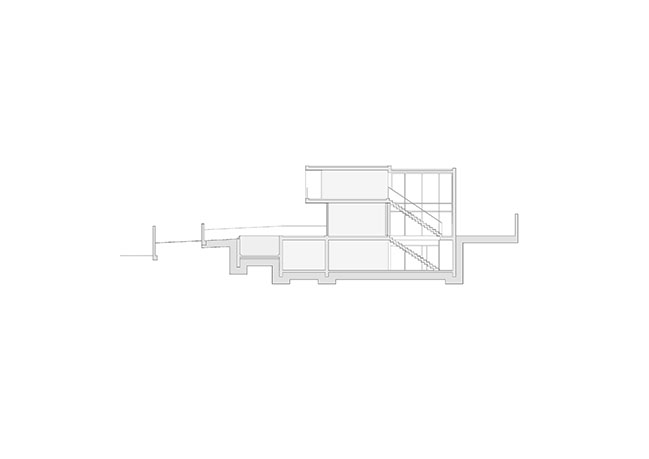 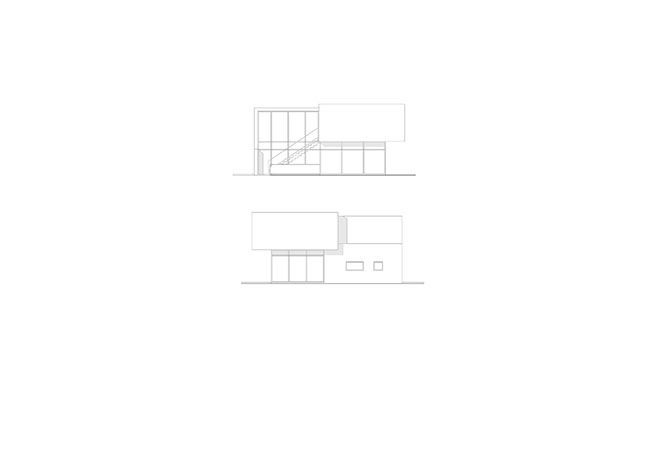 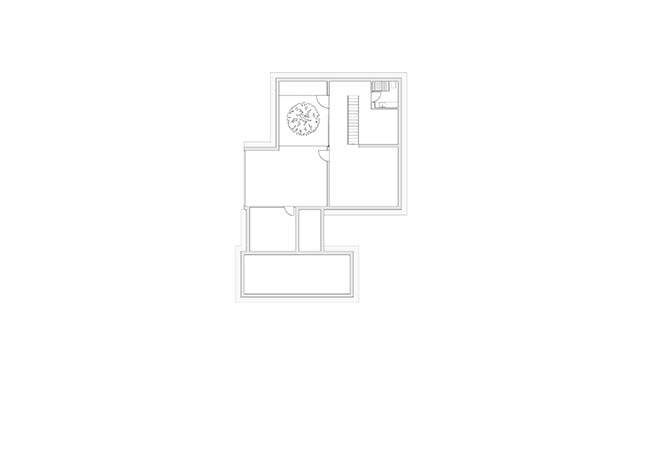 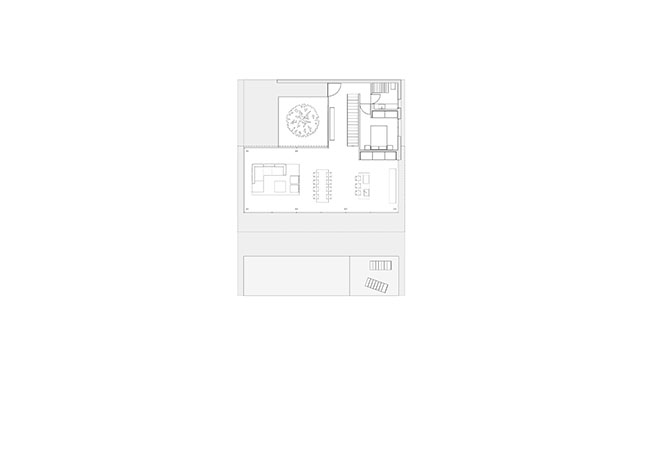 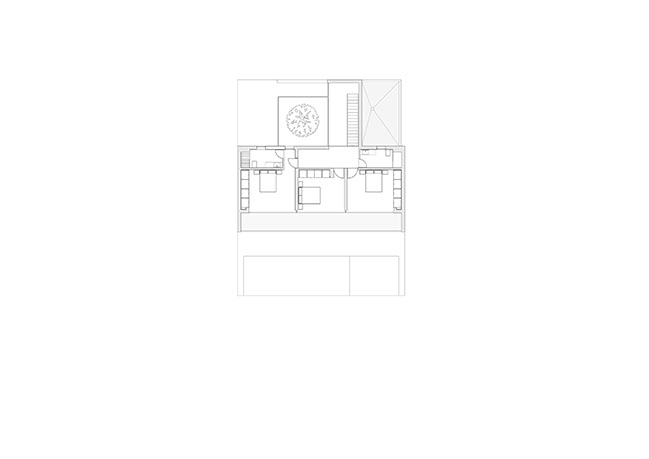 11 / 28 / 2019 Located in one of the most exclusive areas of Moraira (Costa Blanca), a few meters away from the water of the Mediterranean Sea...