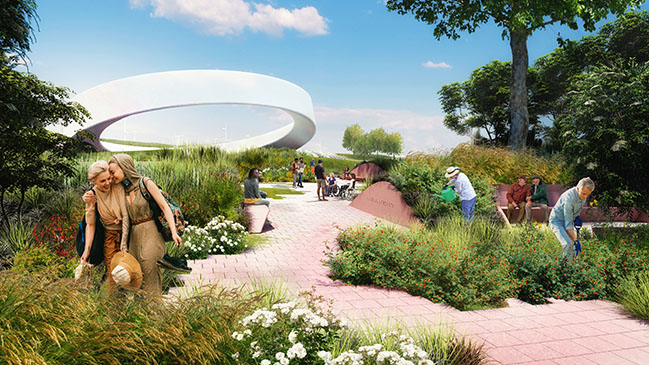 From the architect: The Lens, MVRDV’s competition proposal for Canada’s LGBTQ2+ National Monument dedicated to Canada’s Queer community – in particular those who endured what is now termed the LGBT Purge – has been selected as a finalist and is now available for public viewing on the Government of Canada’s Department of National Heritage website. Designed as part of a team that is led by Canadian office Fathom Studio in Dartmouth, Nova Scotia, and includes Two Row Architect from Six Nations of the Grand River, the Lens represents a striking new addition to the collection of monuments that encircle Ottawa’s Confederation Boulevard.

Located on a sheltered 6300 m2 site facing the majestic Ottawa River, just a few steps from the Parliament Buildings to the east and Chaudière Falls to the west, the Monument and park are a place for education, memorialization, celebration, and inspiration. The concept celebrates the act of resilience generated through community: carving space from a hostile environment, standing proud from the landscape, and sending reverberations of this power into the landscape and beyond.

The LGBT Purge was a discriminatory federal government campaign that emerged during the Cold War and extended to the early 1990s. Homosexuals in public service, the Royal Canadian Mounted Police, and the Canadian Armed Forces were subject to intensive and personally invasive investigation, and fired if discovered. Following a class-action lawsuit, in 2017 Canada publicly acknowledged its wrongdoings, with the ambition to address systemic racism and homophobia still evident in its federal institutions today. 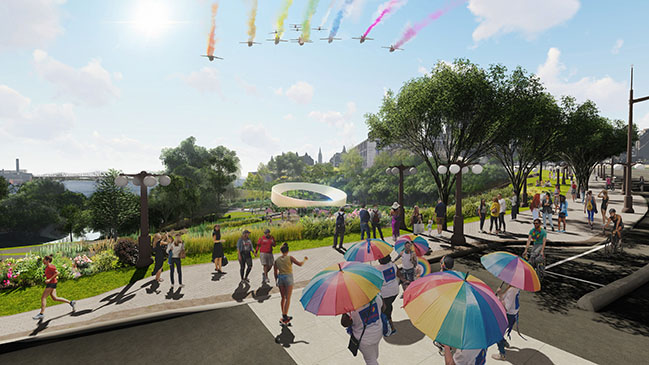 Positioned in the middle of the sloping site, the expansive canted form of the Lens gestures toward the Capital Plateau, and rises to welcome all, most importantly, Canada’s 2SLGBTQQIA+ community. In cross section, the ring is a triangle, a reference to the pink triangle, once a tool of persecution, and now a positive symbol of self-identity. Extruded into a circle, this shape approximates a concave lens, which acts as a meta-symbol: while a convex lens magnifies and scrutinises, symbolising the cruelties of the LGBT Purge, a concave lens is its opposite.

In the light of day, the pearlescent form sits in delicate contrast to the Parliament Buildings, while reflecting the sombre tones and material qualities of other monuments in the Plateau. At night, it exudes an otherworldly ephemerality. Inside, it bonds its visitors together. The proposal also recognises the monument’s location on the unceded territory of the Algonquin-Anishinaabe (Ottawa). A 140-word dedication in Anishinàbemiwin and Canada’s two official languages sits where the circular form meets the earth, facing the central plaza. 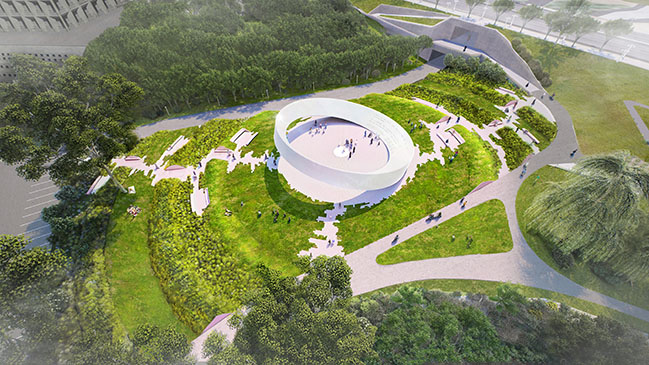 The landscape answers to the “impact” point of the monument with a series of ripples, rolling berms of planting that bloom in alignment with significant moments in the Queer, Indigenous, and Ottawa calendar. The planting uses native species, requiring less maintenance while restoring local biodiversity and reclaiming the health of a previously polluted site. Granite walls and seating between the berms provide space for quiet reflection and bear interpretive installations, supported by a thematic framework of the Algonquin-Anishinaabe’s seven grandparent teachings. Through its function as a monument and its use of landscape, the Lens makes a significant contribution to the UN Sustainable Development Goals, adding biodiversity (SDG 15) reducing inequality (SDG 11), contributing to justice and strong institutions (SDG 16), and assisting in quality education (SDG 4). 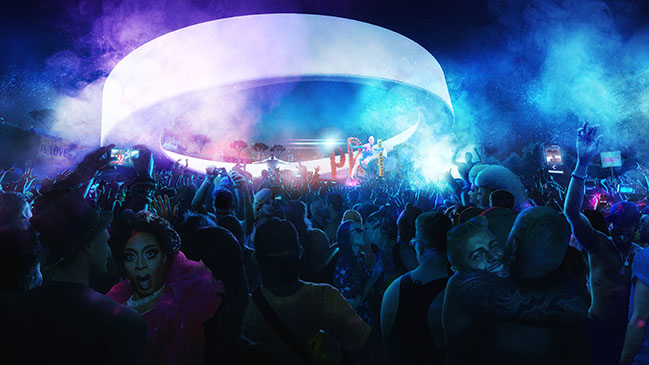 “For this National Monument we have reclaimed the very lens that oppressed us to invite an outward view for community and belonging, and carving a new space for community to heal, reflect, and to grow”, says Margot Durling, creative director of Fathom Studio. “Looking outward, the lens acknowledges that We have always existed, within the monuments and institutions that surround us.”

“The Monument offers a literal embrace for people that have been historically excluded, and will provide a safe space to heal, reflect, and grow”, says MVRDV partner Fokke Moerel. “It was a great honour, challenge, and joy to transform this hidden place into a well-connected, emotive space for gathering and a haven for Canada’s 2SLGBTQQIA+ community.”

11 / 18 / 2021 The Lens is MVRDV's competition proposal for Canada's LGBTQ2+ National Monument, dedicated to Canada's Queer community - in particular those who endured what is now termed the LGBT Purge...