Bridge House is located in Coves Noves, a residential area in the north-east coast of Minorca island, Spain... 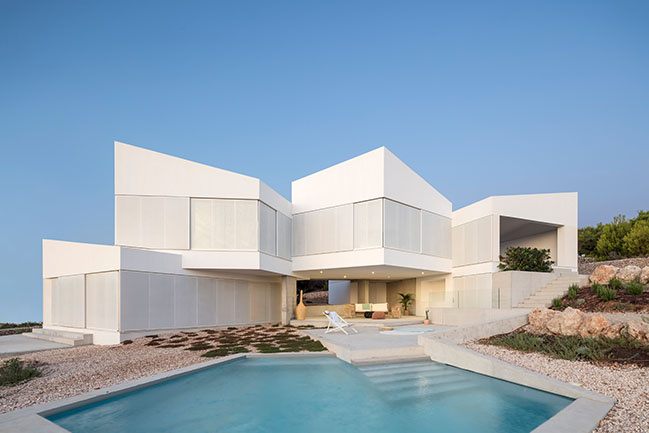 From the architect: Its generous plot of 2400sqm allows the dwelling to stretch horizontally to capture the surrounding’s best landscape views. At the same time, its rotating volumes create surprising interior spaces and never repeating outlooks. 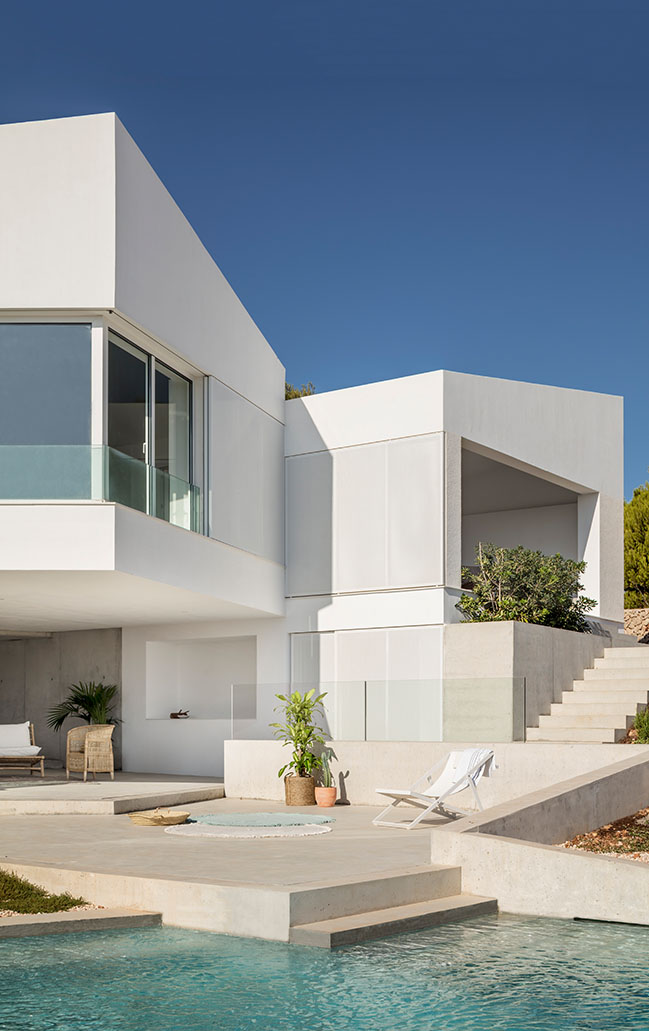 Based on the assembly of squared and pentagonal plans, these small polyhydric volumes stack and hover over the existing landscape with playful lightness. Their bridge-like composition gives the house its name. Breaking down the program into smaller units seemed a more respectful way to place a large program onto the site. The outer terraces and pool are designed as a direct extension of the indoor plan, following its same geometries and keeping the vast majority of the plot untouched.

Program:
This house has been thought primarily as a holiday house in Spain, where one spends most of the time outdoors enjoying the warm weather. Therefore, the very large porch of almost 100sqm, located under the hovering volumes, is conceived as the heart of the house, where large social gatherings take place. With the proximity of the pool and garden, and equipped with an outdoor kitchenette, one can enjoy the views in both directions, the sea to the front side, the forest to the back. 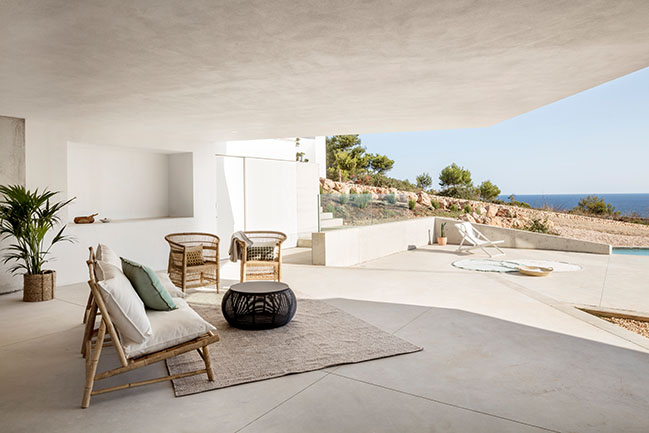 A second porch on the first floor, in connection to the main kitchen, is meant for a more casual daily use. This space is also protected from neighbouring views and open to both sea and mountain views. The program consists of an interconnected living and dining space and 5 bedrooms, one of them located independently as a guest pavilion. Common spaces are visually independent, however completely interlinked through open thresholds that create fluid circulations.

The master bedroom on the first floor is connected with the living room and kitchen, thus functions as an apartment within the house. All other bedrooms are placed on the ground floor in direct connection to the garden and the pool. The bathrooms have been designed as open and bright spaces, with large floor-to-ceiling windows. Finally, a detached volume houses a garage, a laundry-room with a patio for hanging clothes and a large storage and installation room. 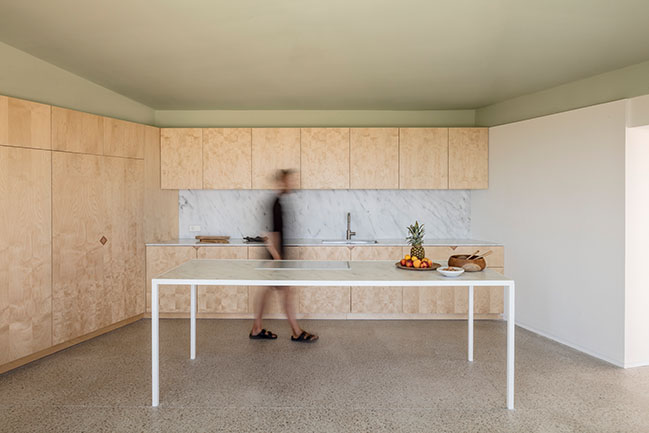 Facade:
Bridge House’s all-white facade responds to Minorca’s historical tradition of white-washed walls and pitch-roofs in a continuous white veil. Following this local custom, we chose a continuous self-washable white plastered finishing for walls, roofs and soffits. Concealed gutters where carved out from the roofs planes in order to guarantee good maintenance of the facade. 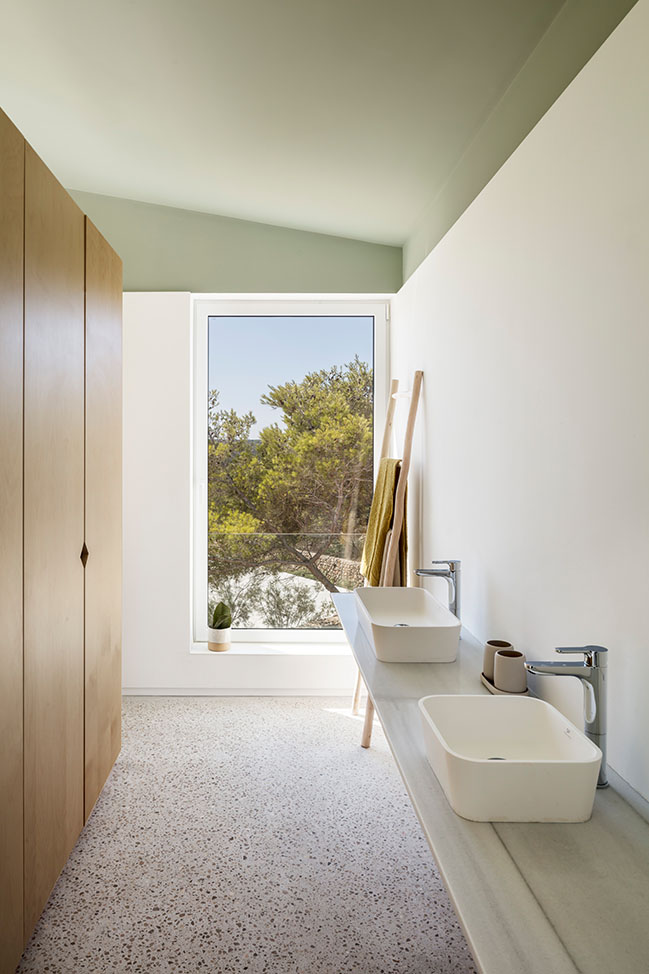 A horizontal stripe of 210cm height surrounds the house with an outer skin of white aluminium perforated sliding shutters. Along these stripes are located all the windows of the building. These shutters have a double function: on one hand, they protect from direct solar radiation without blocking the views from the inside. On the other hand, they give privacy and security, since seen from the outside, their mesh becomes opaque and they allow the house to be completely locked down. 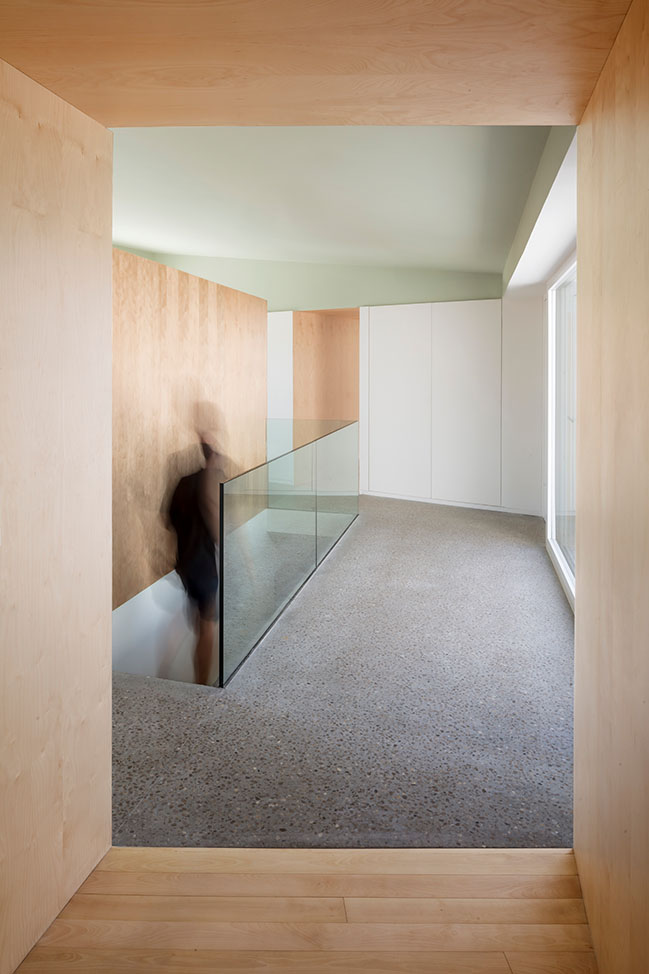 On the back side, where there are no openings, the shutters disappear; however, these stripes continue as two different facade roughnesses: a softer and a rougher grain for the plastered finishing. When the shutters are closed, the strong geometric volumes stand out as pure white shapes against the blue sky. The landscape elements, such as retaining walls, stairs and terraces were kept in exposed concrete to avoid blending into the white polyhedrons. 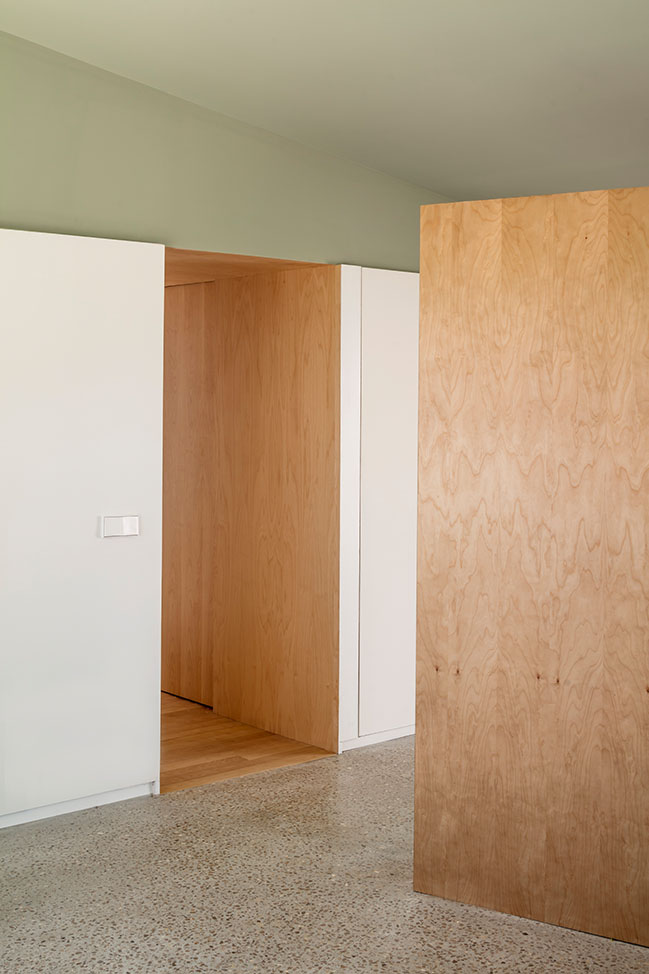 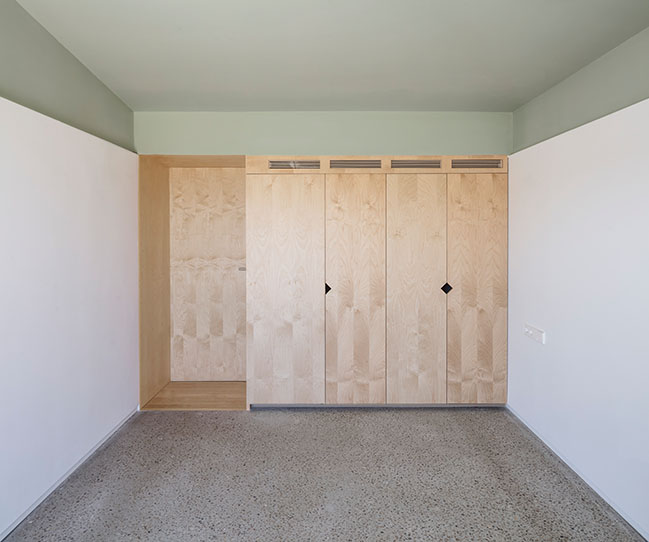 Interiors:
In contrast to the all-white abstract materiality of the facade, the choice of materials for the interiors was on purpose rather varied. Pitched roof ceilings were painted in pastel green to highlight the feeling of airiness of the 4m high spaces. Light birch wood was used in wardrobes, deep thresholds and kitchen closets to mark the different inclinations, always keeping a uniform finishing for each plane. 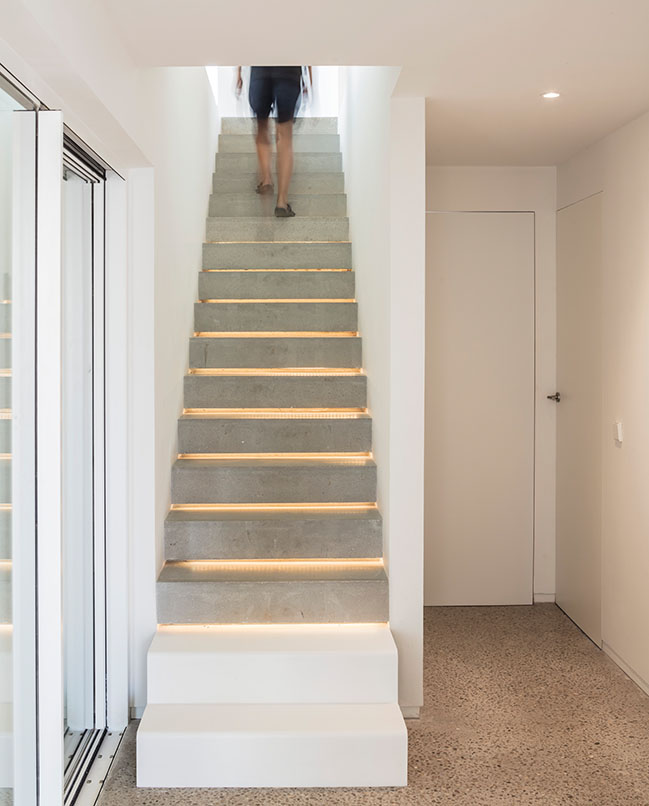 The pavement is an in-situ casted rough terrazzo, made with no resin additives but by only polish a standard concrete until the grain is exposed. To protect the interior walls, a low white aluminium base creates a recessed slit, so that the concrete flows under it. White marble was used for bathroom and kitchen countertops and white mat 10x10 tiles with green joints in the shower walls.

The thoroughly customized illuminations were very relevant to the overall design. Only indirect light is used all around the house, except for the bathrooms. In this way, LED stripes hidden above the vertical walls brighten up the inclined green ceilings highlighting the generous clear height of the rooms. Stairs, wardrobes and kitchen are also lit up through concealed LED stripes. 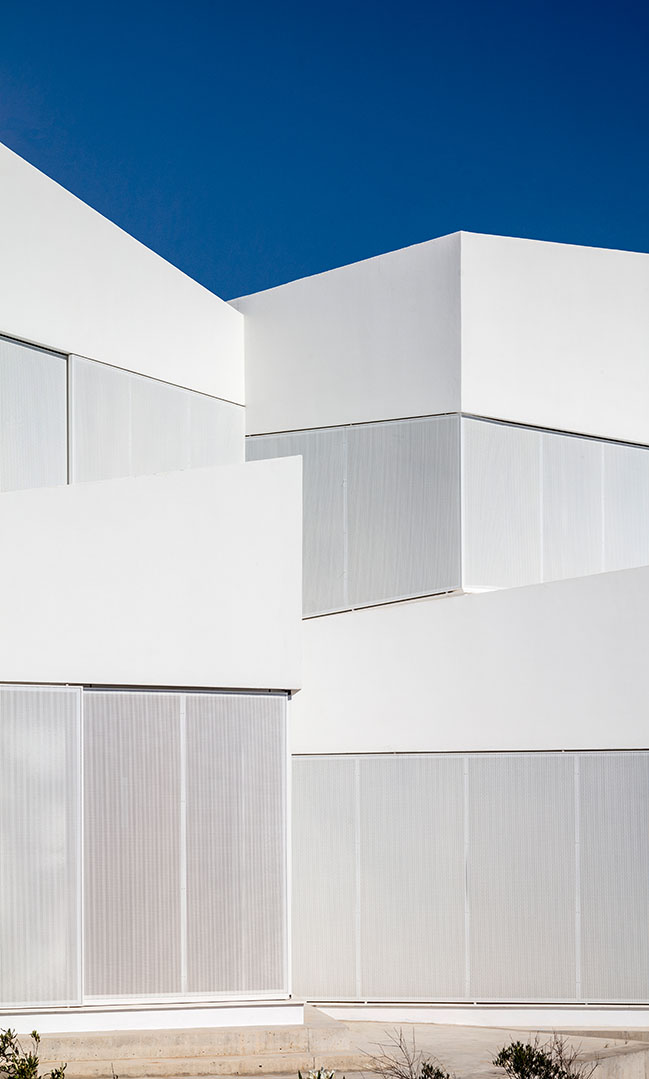 The decision of avoiding both wall and ceiling exposed fixtures, creates a soft atmosphere and gives protagonism to the high ceiling and the standing lamps. From the outside, the villa aims to keep a low-profile and is therefore illuminated only where required. Only the main access, is emphasized through wall-washing floor lights and a sculptural olive tree. 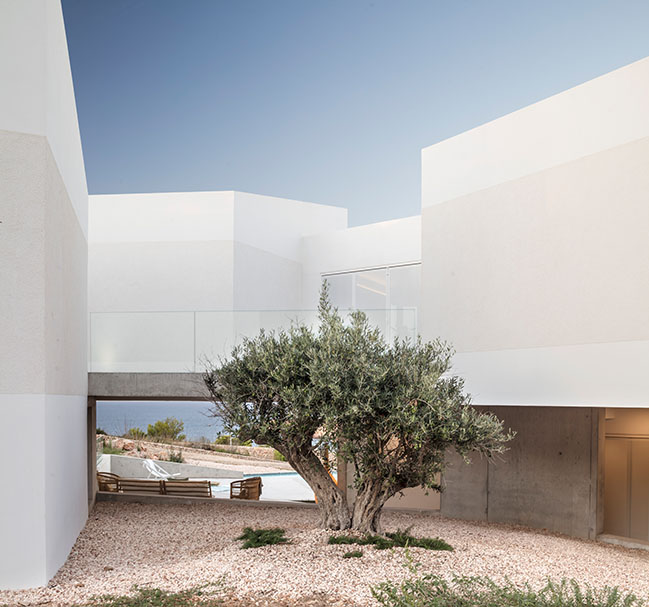 YOU MAY ALSO LIKE: Stone House by Nomo Studio 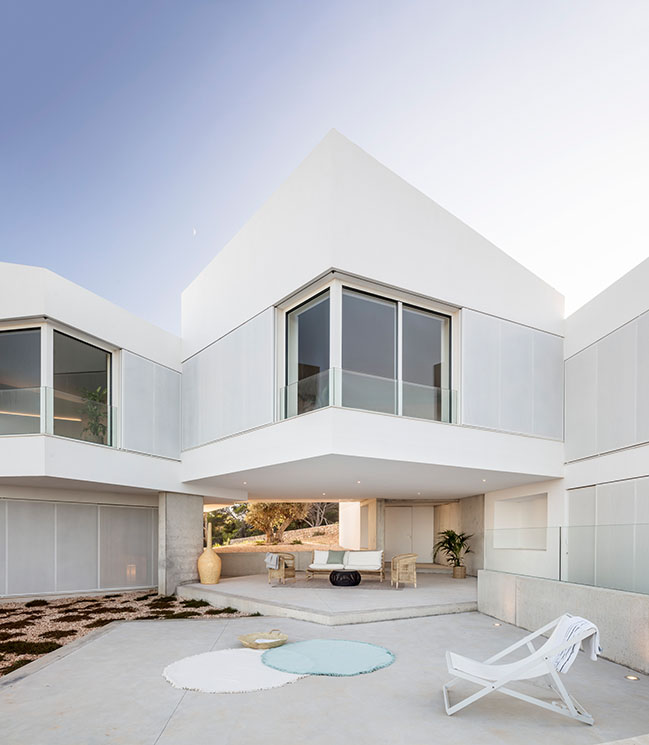 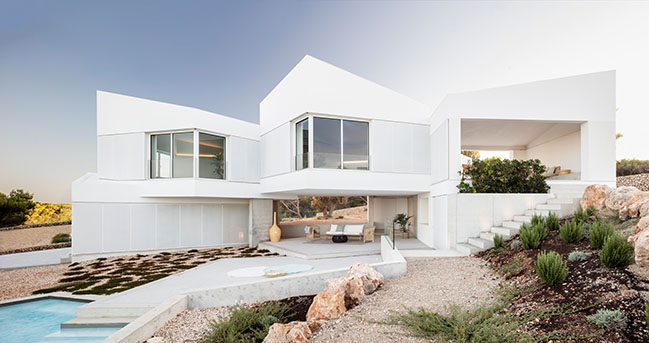 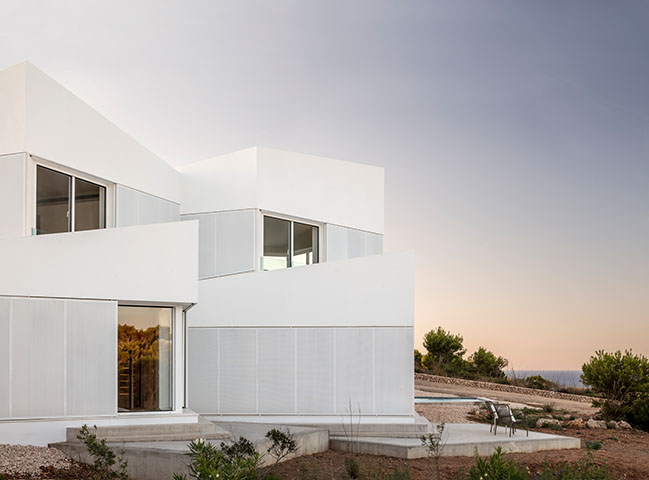 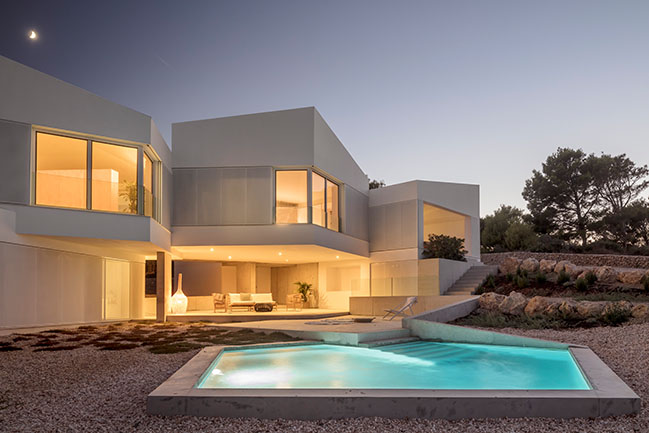 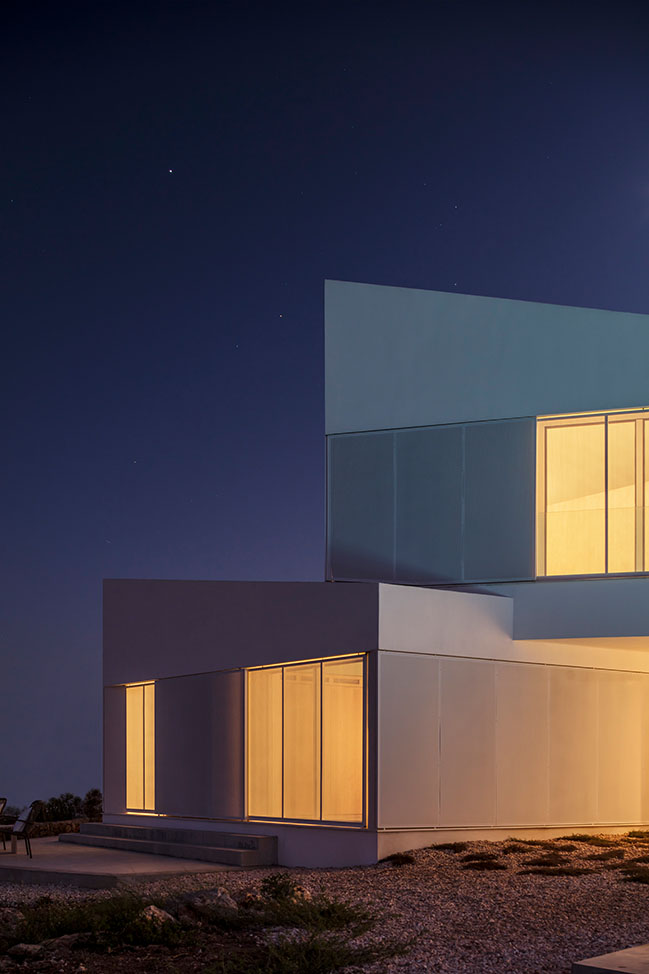 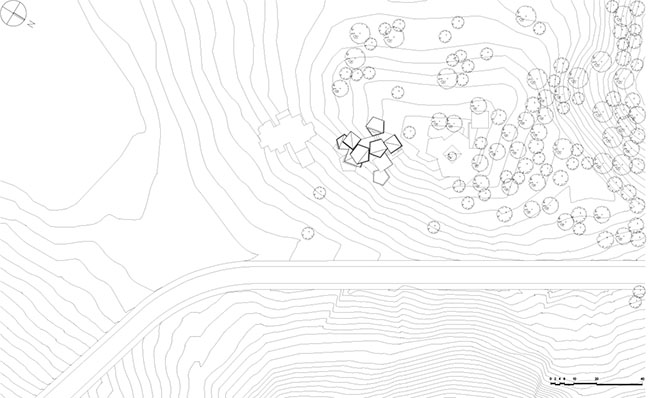 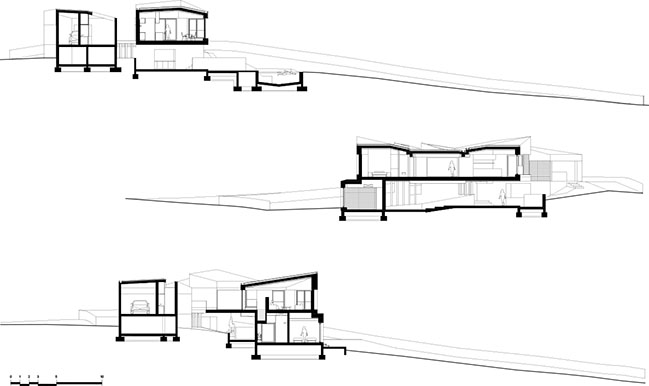 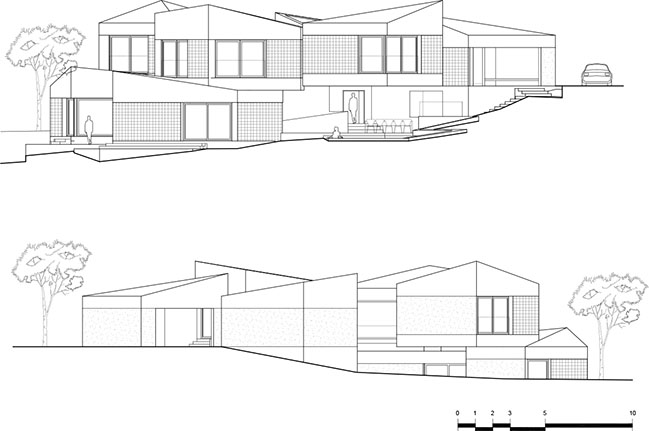 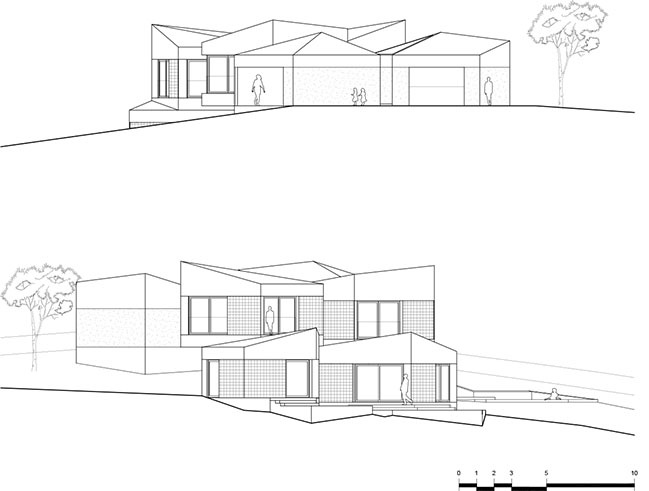 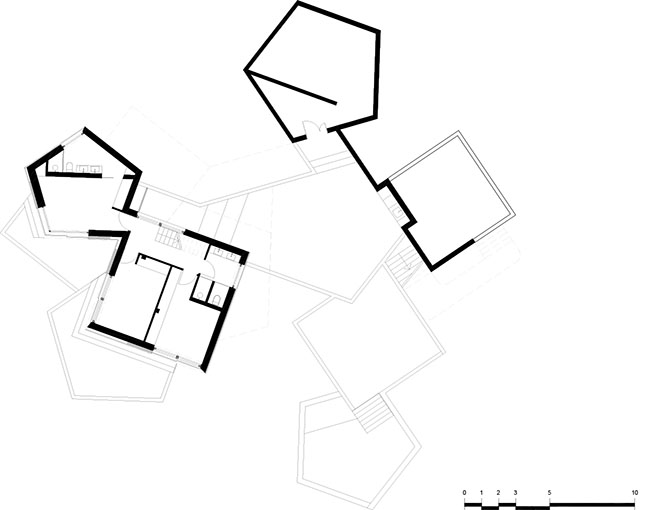 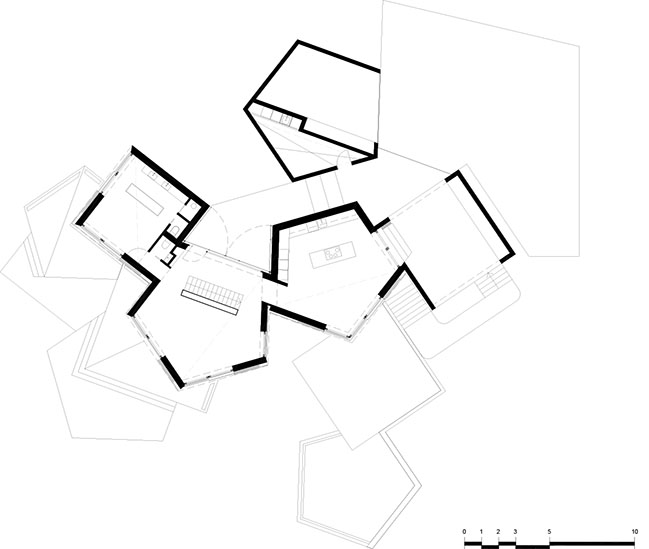 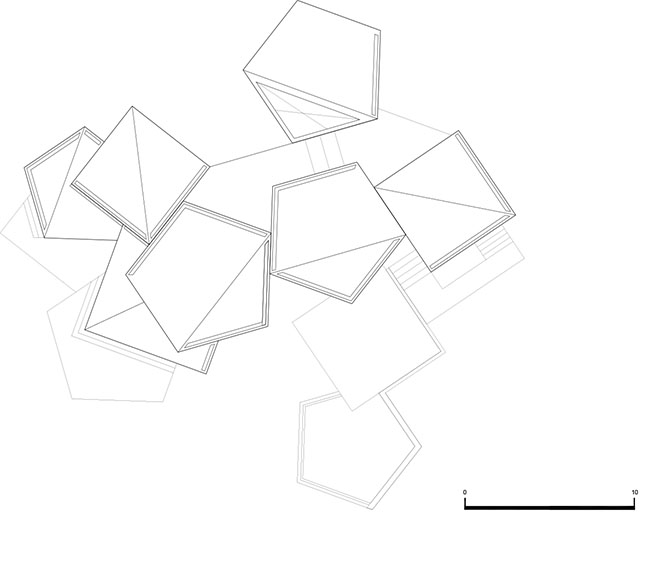 02 / 19 / 2020 Bridge House is located in Coves Noves, a residential area in the north-east coast of Minorca island, Spain