modern house, architecture in us

This modern house was designed by Robert Maschke Architects to create a studio for work and a home to raise a growing family in the future. 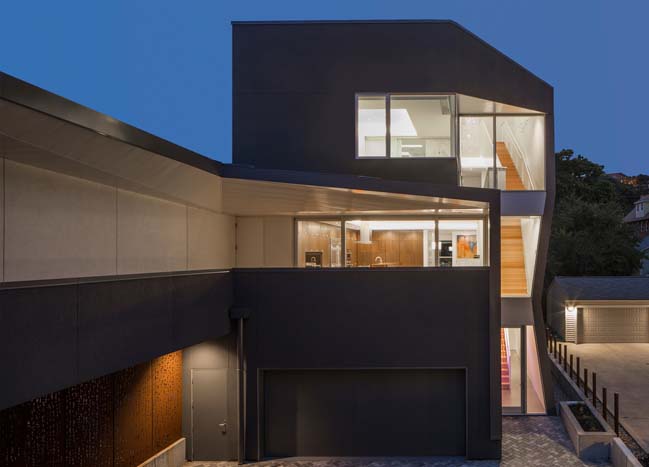 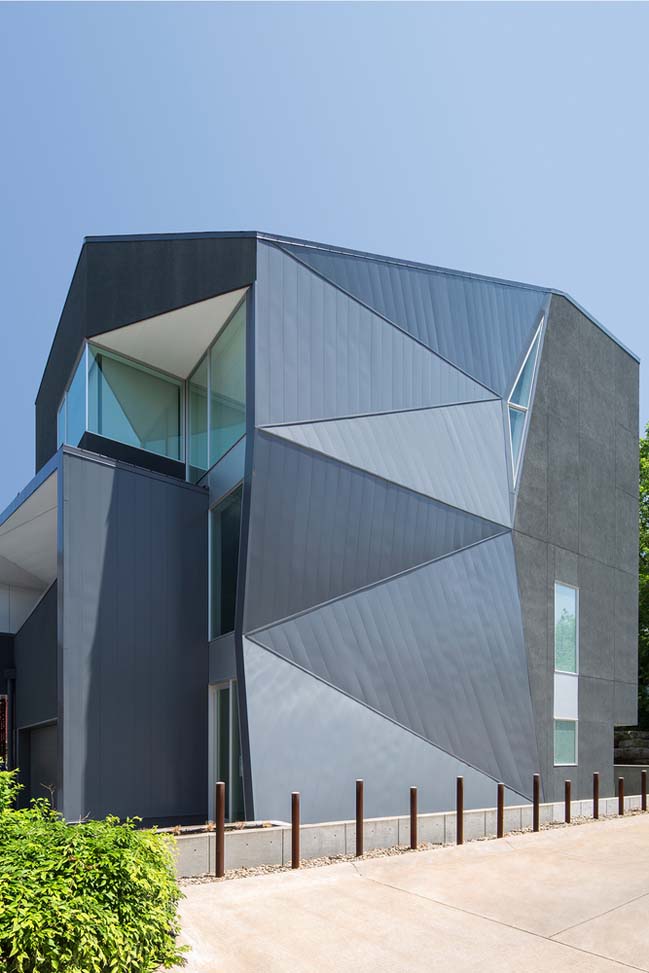 From the architects: The architecture emerges from the reconciliation of inherent contradictions embedded within the site and program. The client desired an urban presence, while also creating private exterior space secluded from the surrounding context. The couple asked for flexibility to "split" the property into independent homes in the future. In response to these constraints, the massing of the house became parsed into two distinct volumes, pushed to the extreme boundaries of the site, connected by a covered bridge. This organization creates a communal courtyard from the residual space between the volumes. A monumental stair connects the various programmatic elements. The stairwell folds upon itself overlapping and separating, creating a visual connection between levels. The movement of the stair is evident on the metal surface of the exterior envelope, a folded logic that unites the parts into a cohesive whole. 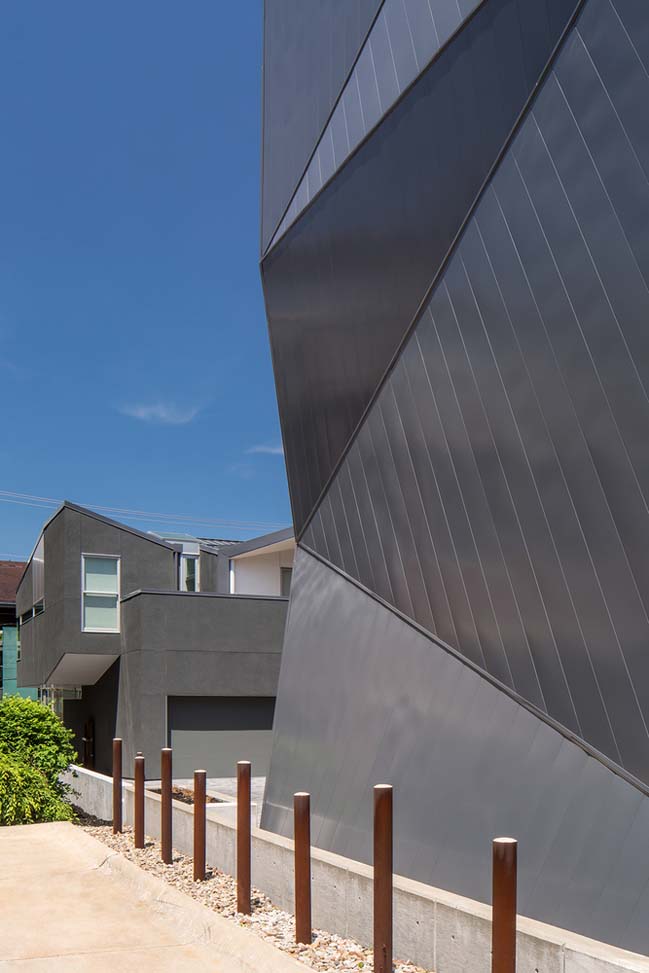 The husband and wife client, both industrial designers, commissioned the project to create a studio for their work and a home to raise a growing family. The residence is located on a dense and constrained urban street away from the idyllic neighborhood center. The site is narrow and bound by three “shot gun” homes to the North, a retaining wall to the East, and a multi story condominium to the South. A former open framed steel warehouse, now used as a covered surface parking structure, is to the west, obstructing views from the site. The imposition of these structures help to inform the design approach. 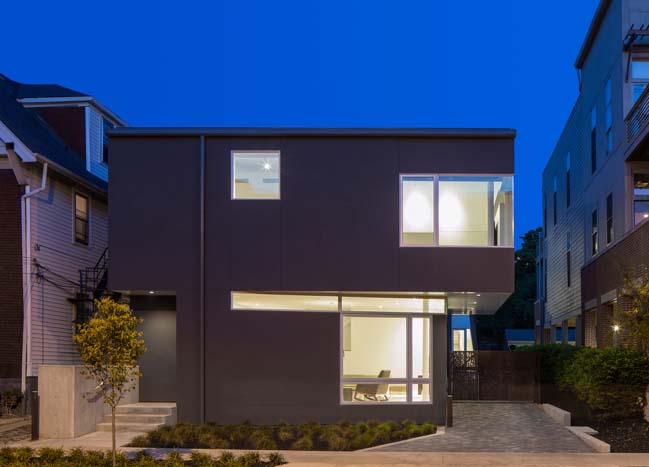 The material palette is simple and elegant. The exterior facade is black stucco concrete in concert with a color matched metal folding wall and roof. Patterned corten panels provide privacy from the street and the adjacent properties through their use as entry gate and perimeter fencing. The interior is composed of hard troweled concrete floors with white walls, floor to ceiling book matched and sequenced marble slabs in the bathrooms, and richly colored bamboo for the architectural millwork and stairs. Additionally, the monumental stairwell is veiled in white perforated steel panels. This textured strategy is implemented on select glazing units through etching. These patterns were developed through a series of photo manipulations of light passing through a bamboo forest. A transposition inspired by the materiality of the millwork and stairs. 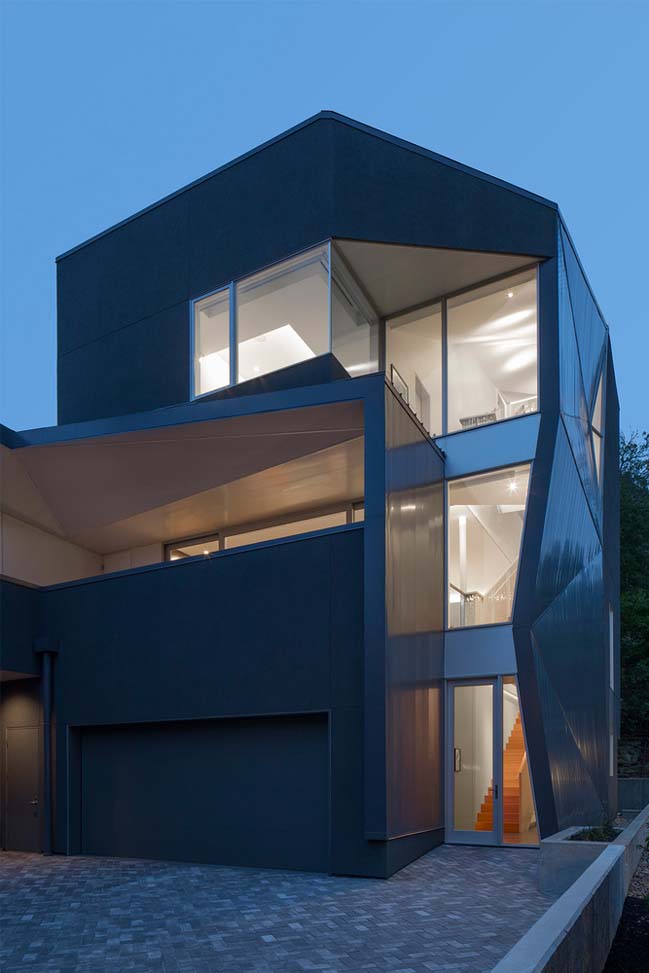 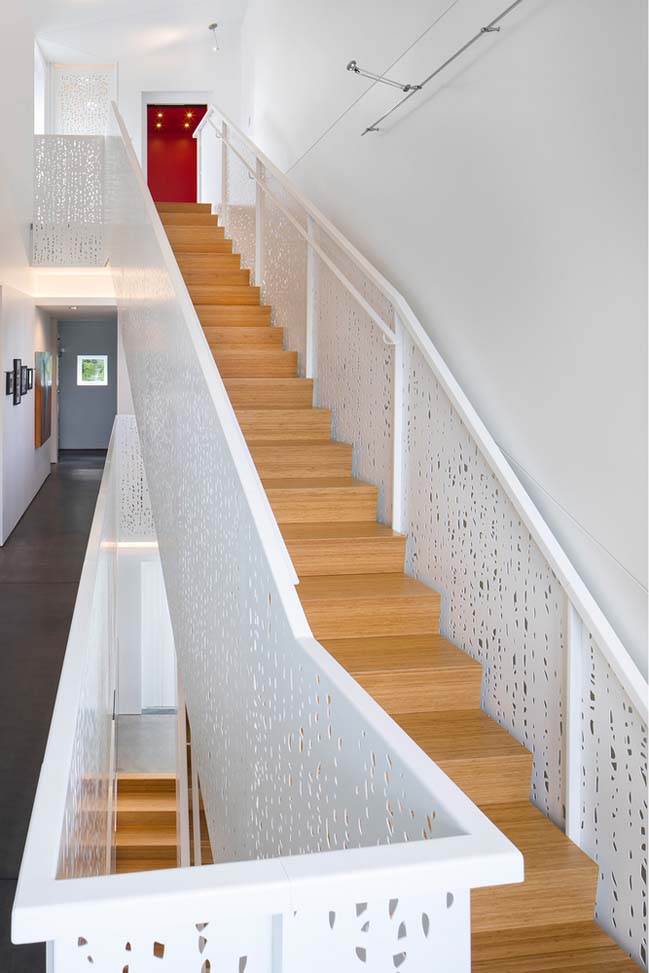 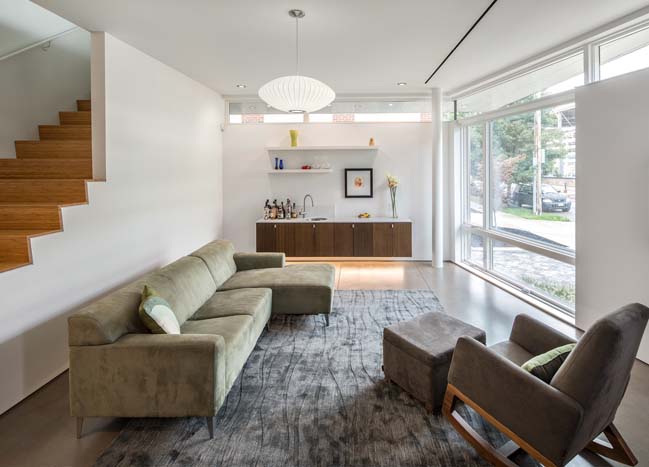 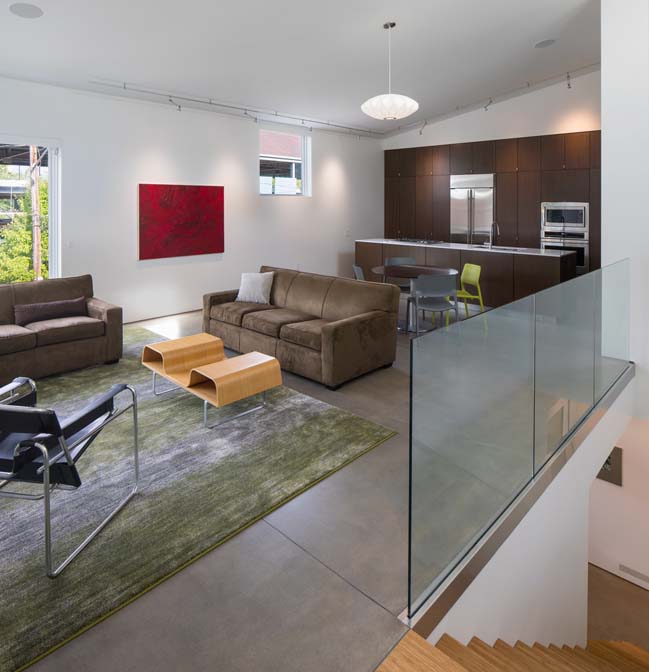 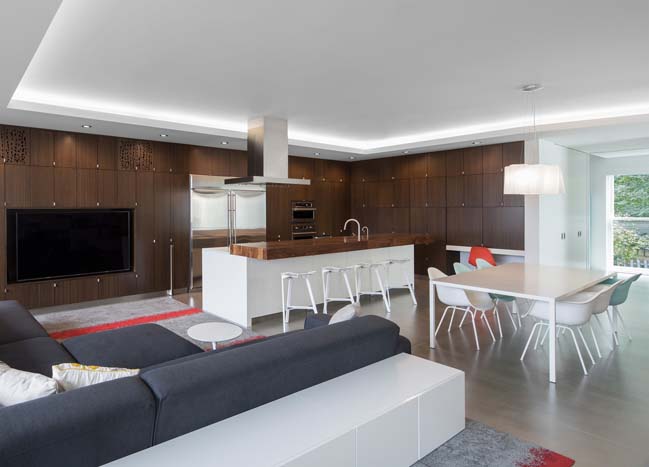 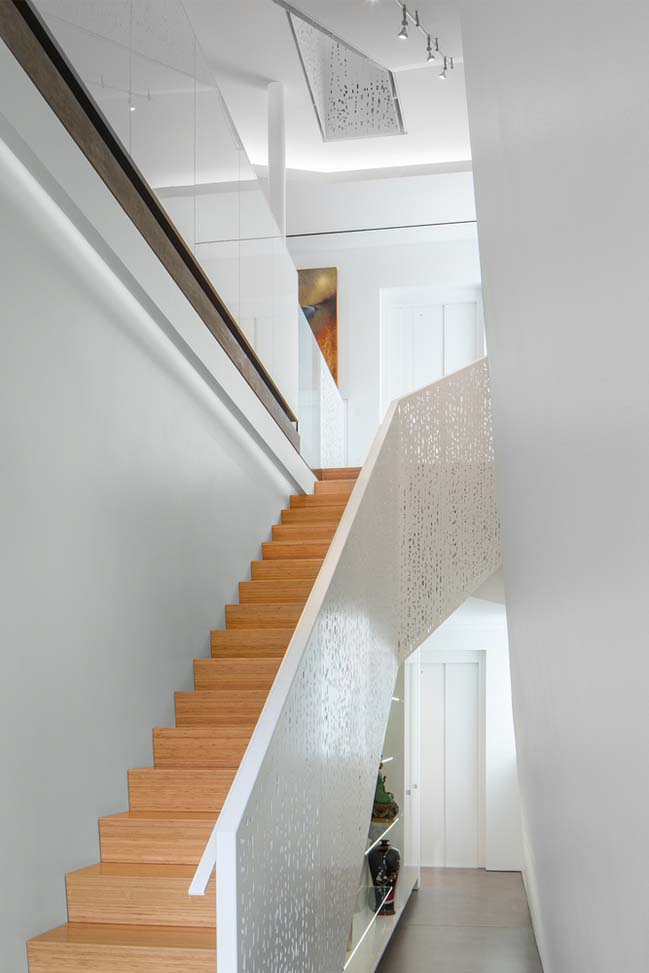 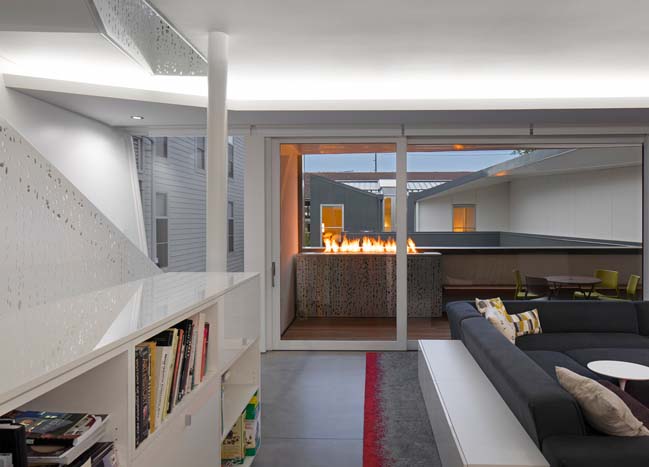 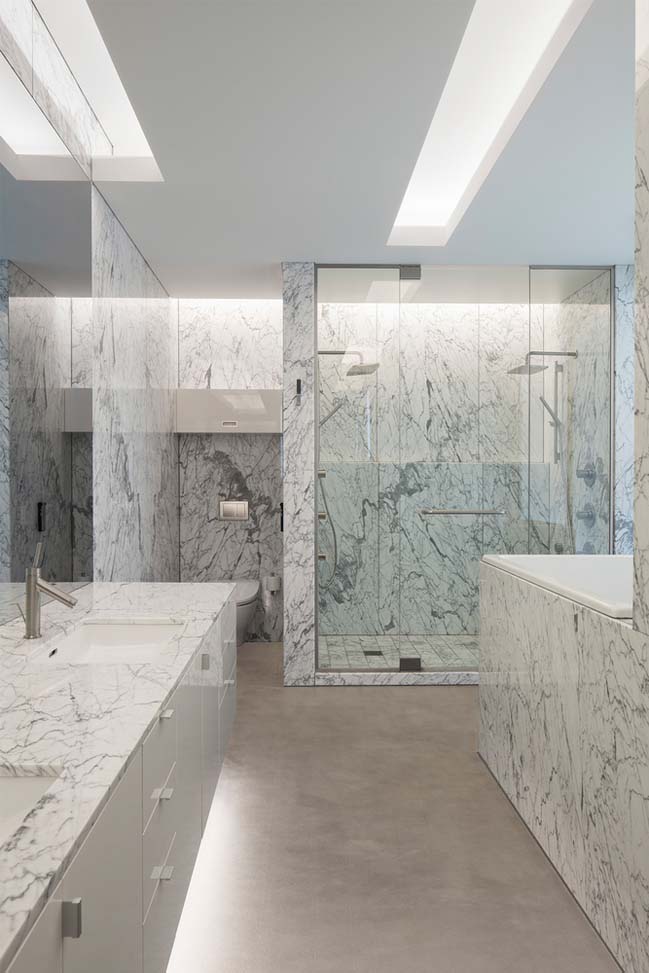 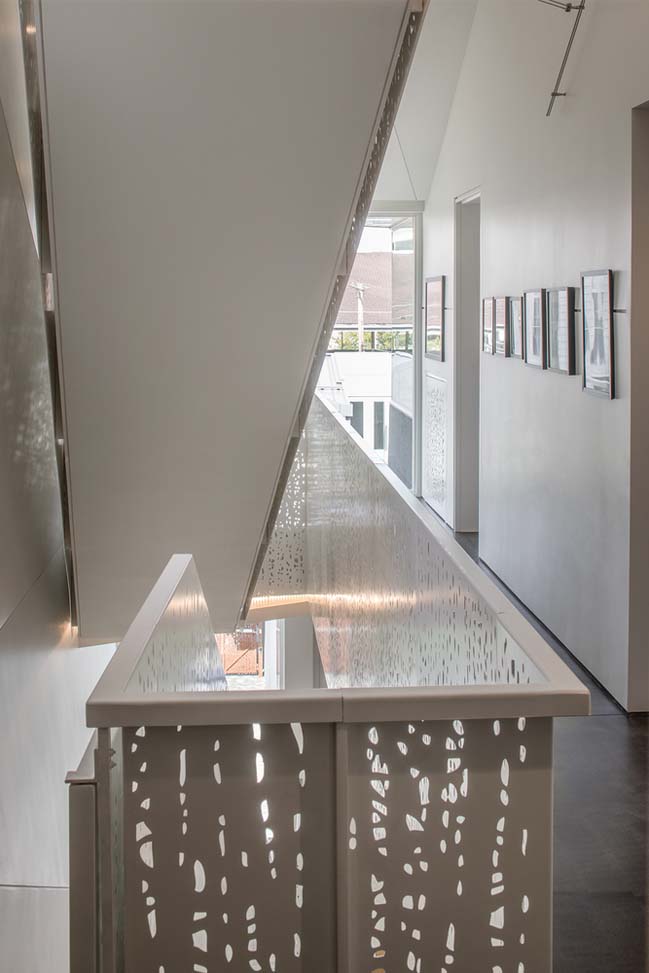 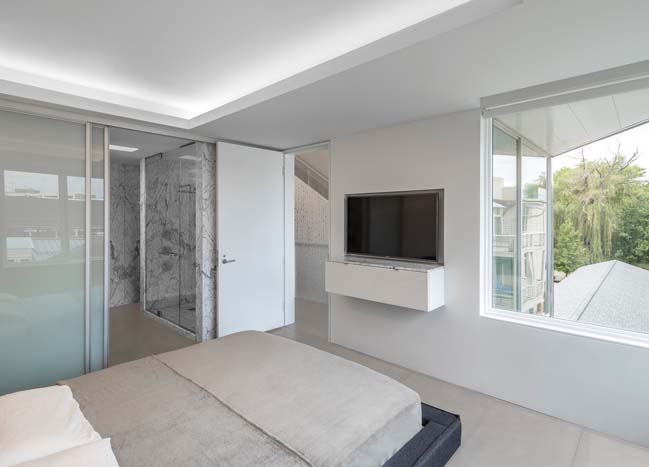 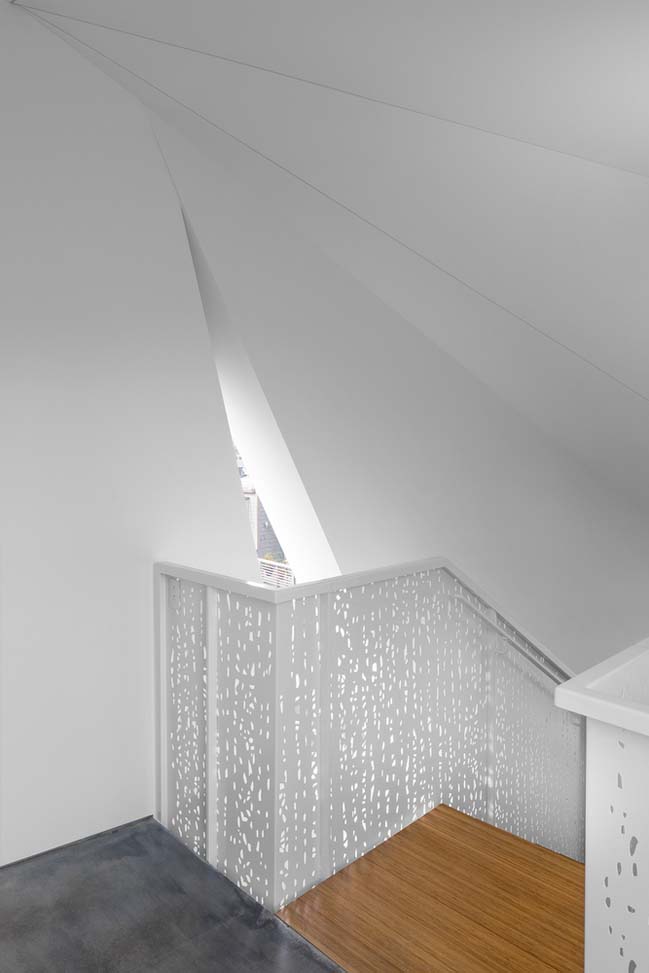 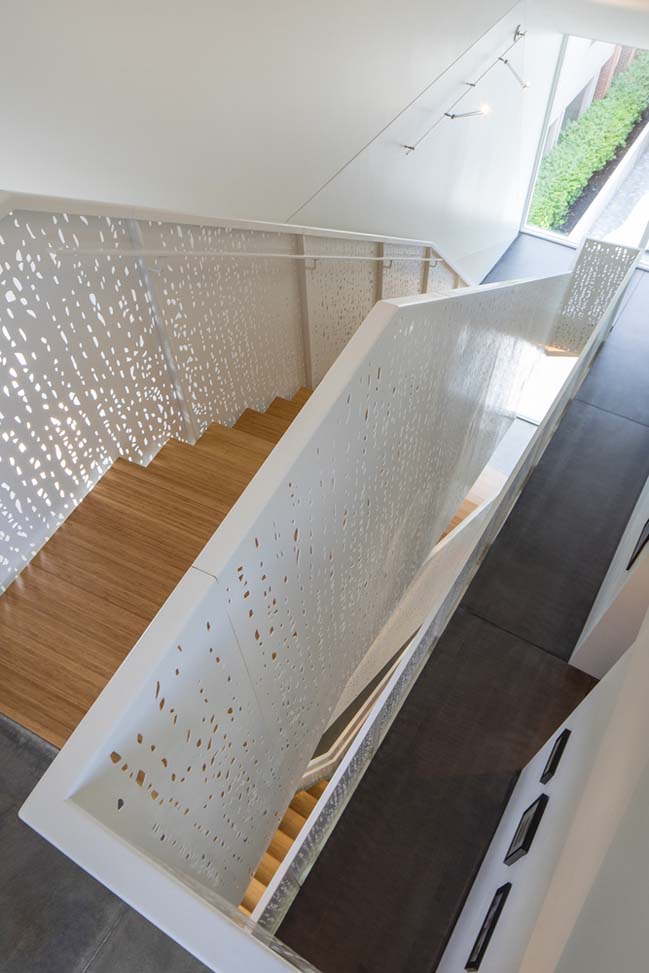 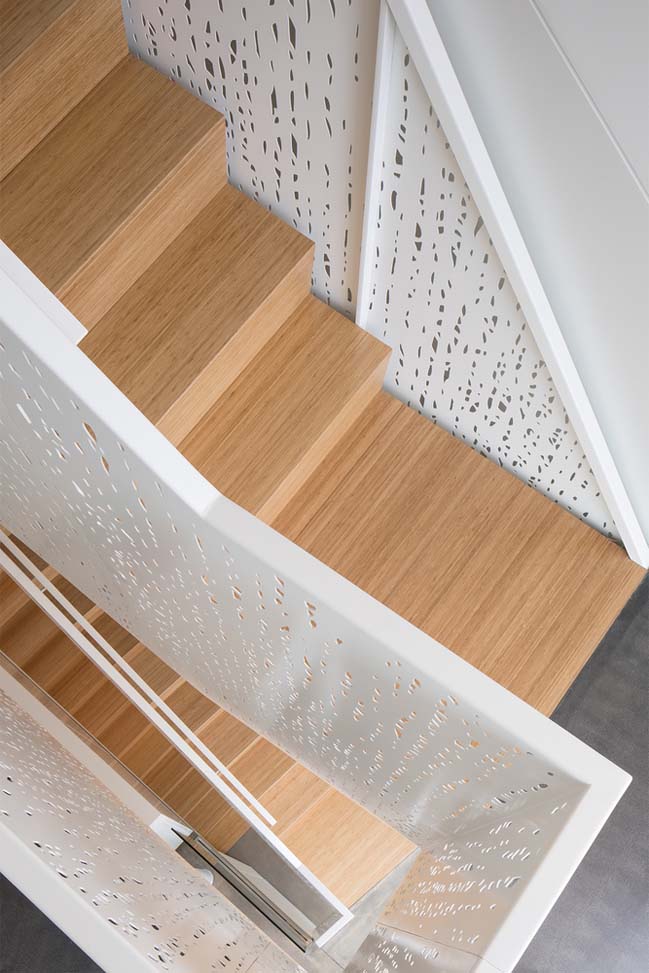 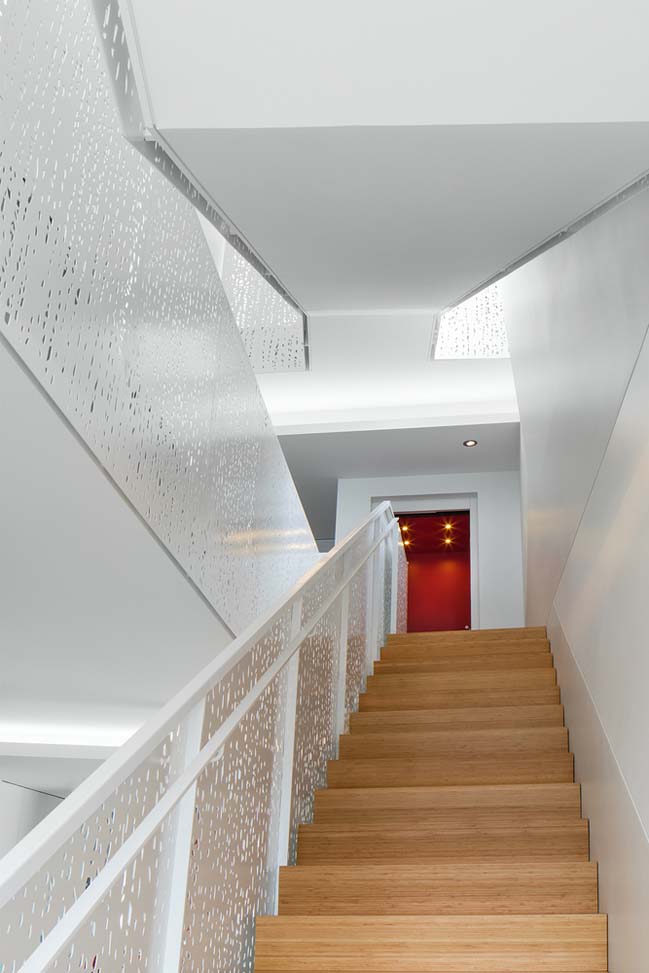 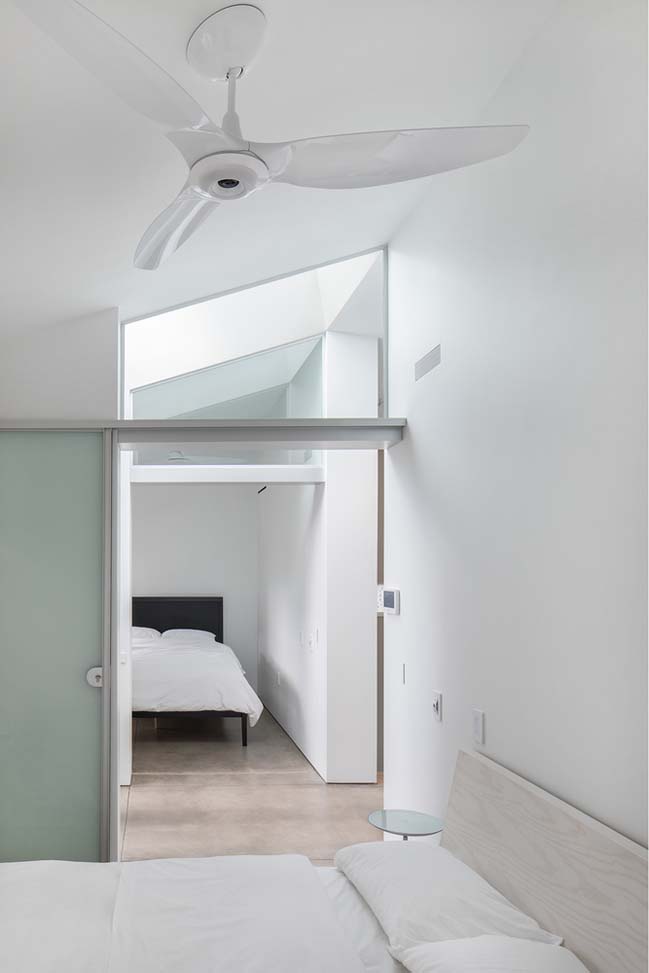 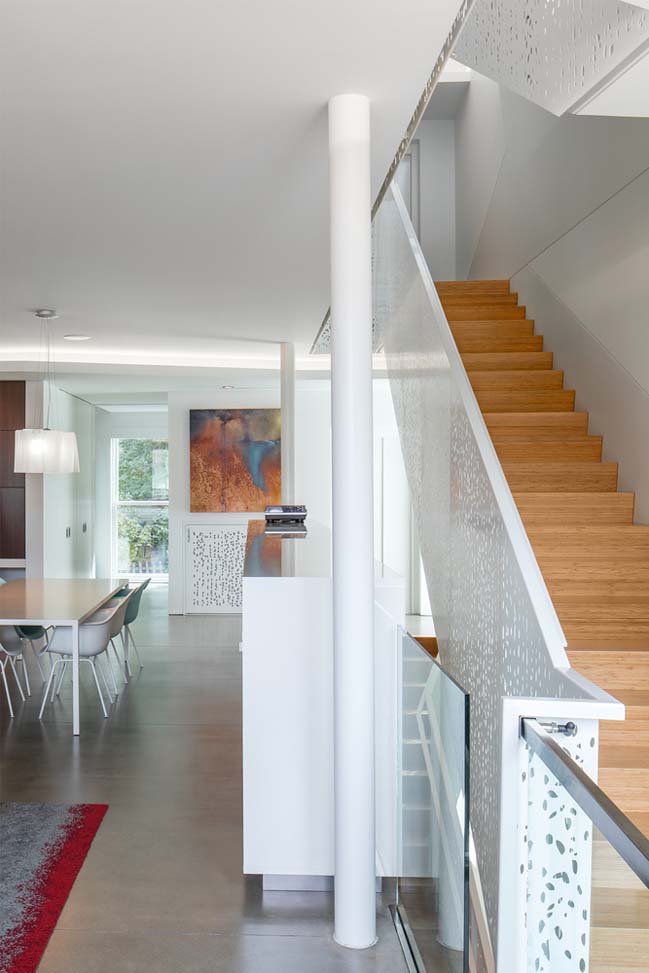 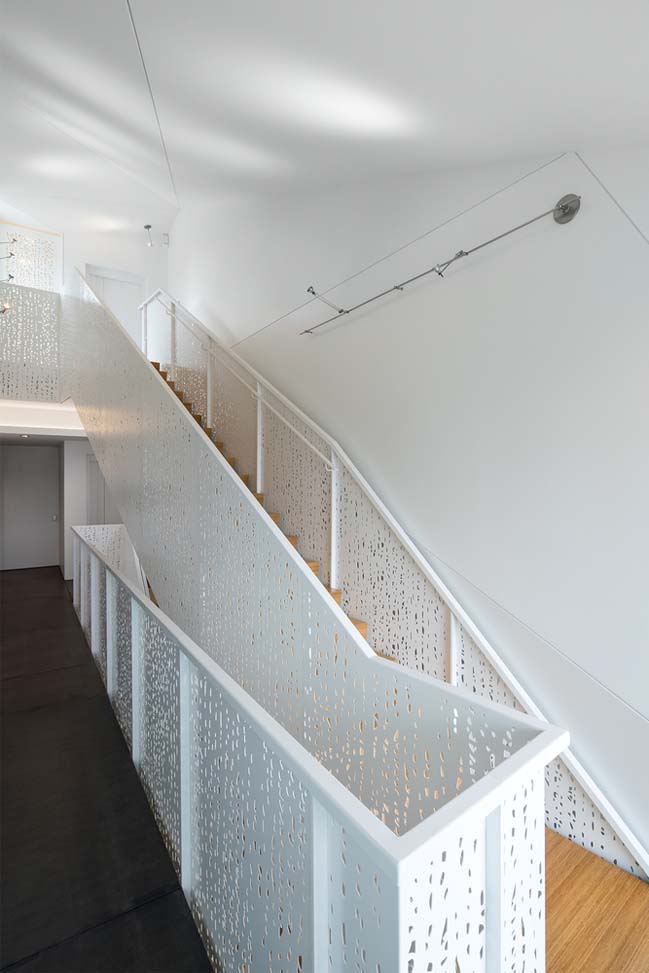 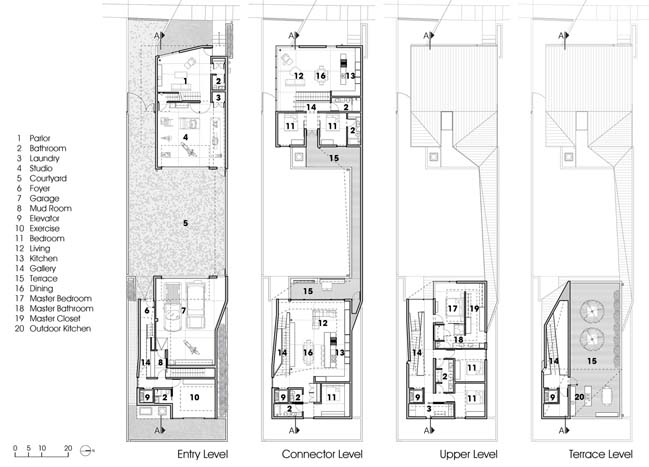 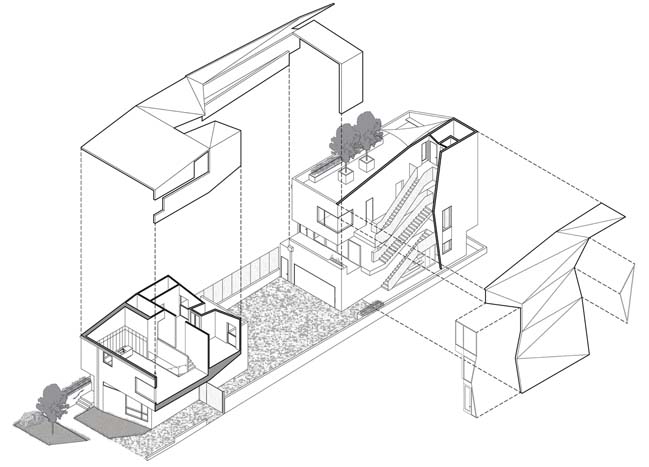 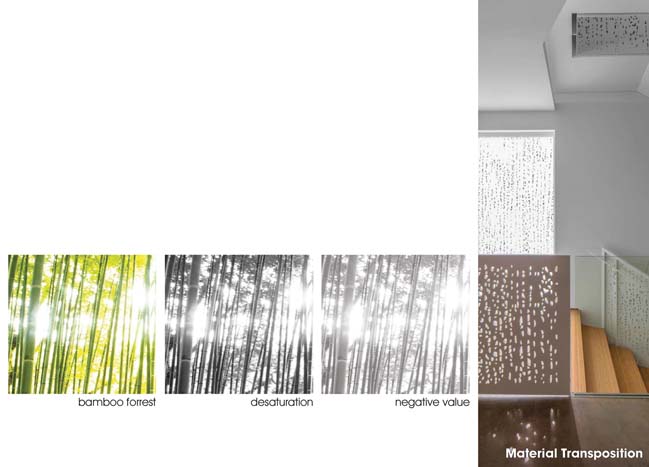