Patio house sits on a gently sloping site located in Coves Noves, a small urbanisation on the north-east coast of Minorca’s island, Spain... 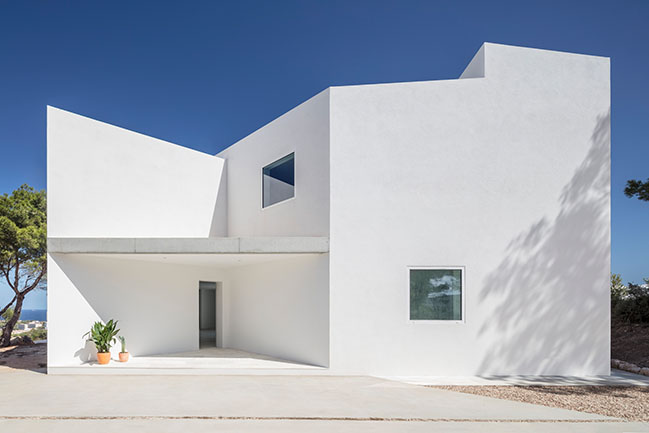 From the architect: The plot has great views over the Mediterranean Sea, but unfortunately has also a 10-storey hotel shooting up in the horizon; an old relic from times when landscape integration meant less. Because of this visual obstacle and since the neighbour’s house is only a few meters away from our plot, we decided to intentionally direct the views in specific directions. Thus, the house plays with solid and glazed walls that frame undisturbed views towards the sea, forest and garden while hiding the massive hotel construction and isolating itself from neighbours. The villa’s position on a hilltop gives it remarkable views, however it also exposes it to the strong wind from the north.

Sun orientation, conflicting views and wind protection were all dealt with through the introduction of an isotropic geometry: a pentagon. The house was rotated so all rooms could enjoy clear sea outlooks avoiding the hotel. A square was removed from the core of the pentagon to let more daylight into the house and create interesting visual connections. This void became a south-oriented patio protected from the strong northern wind. Three of its sides are built up by large sliding glass doors that connect both visually and physically the opposite zones of the garden making it possible to gaze at the sea through the ground floor. The fourth wall of the patio is removed forming a north-south axis of outdoor interconnected spaces: terrace - dining - patio - swimming-pool area. Two sliding windows inclosing the indoor/outdoor dining space allow a flexible control of natural ventilation and wind protection. From autumn to spring the patio captures the heat of the sun resulting in a warm and inviting space, while in the summer the same place can be covered and turned into a large porch with a soft breeze from cross ventilation. 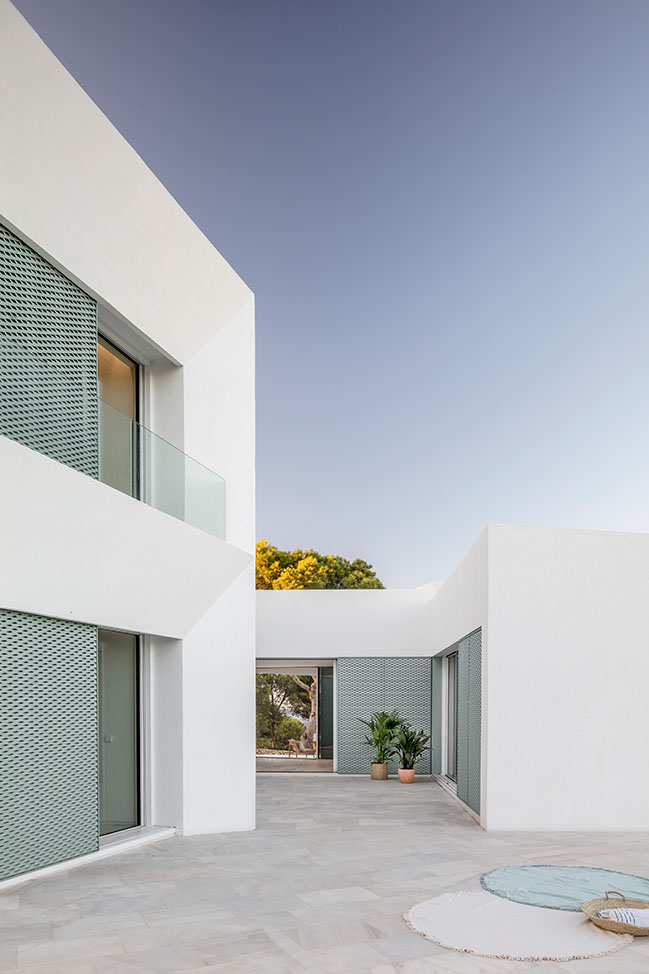 The facade finishings take strong references from local fisherman’s architecture with whitewashed walls and navy blue or deep green shutters. Nonetheless, the large scale of our aluminium sliders in pastel turquoise colour give the composition a clear contemporary character. The deployé shutters block the sun during daytime and secure the house when it is closed for the season. The grainy plaster of the outer walls creates an interesting contrast with the inclined frames around the large windows, were a smooth treatment enhances the sharp edges of its leaning roofs. The back side of the house has a completely different language where smaller squared windows, flush with the outer facade, remind of a more domestic scale. 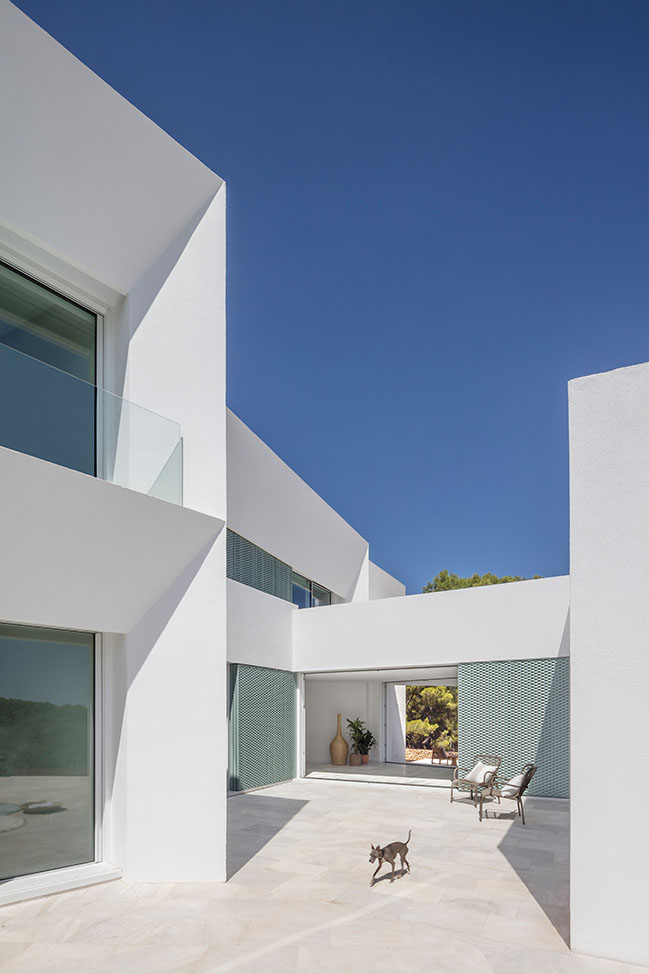 Indoors, a combination of light colours and high ceilings with changing inclinations reflect and magnify the abundant daylight that comes through the generous windows. Large sliding glazings and continuous white marble floors dilute the limits between interior and exterior spaces. The use of the same local marble throughout the house, including the cladding of bathroom, kitchen walls and stairs, give the house a fresh look. Only few elements, such as the pool, the stair railing or the kitchen furniture, break the all white tones by introducing small turquoise details that link back to the shutters outside. 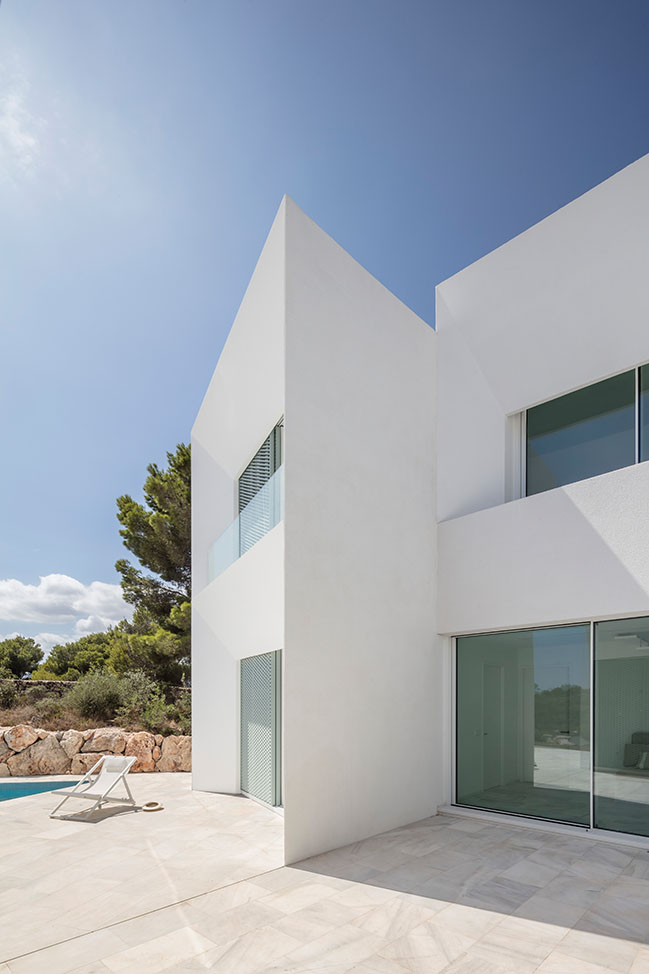 Highly insulated walls and a thought through natural cross ventilation scheme guarantee an energy-free functioning of the building almost all year around. The perforated sliding shutters regulate the amount of solar gains throughout the seasons and daytime hours, reducing drastically winter heating and summer cooling needs. Heating, cooling and warm water are generated by an energy-efficient heat exchanger and distributed AC units allow the different rooms to have independent temperatures. 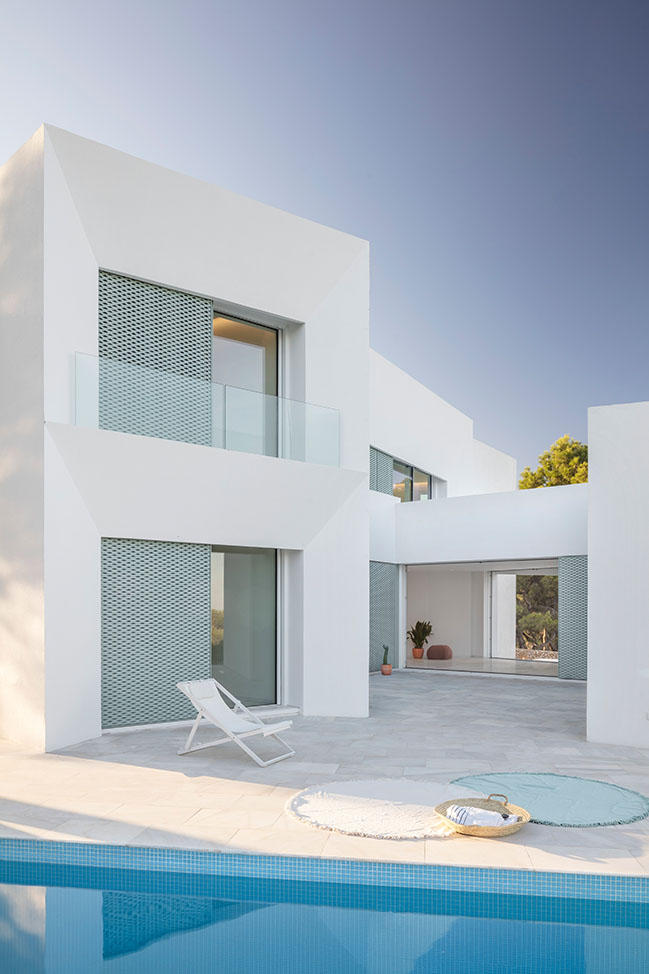 YOU MAY ALSO LIKE:
> Bridge House by NOMO STUDIO
> Stone House by Nomo Studio 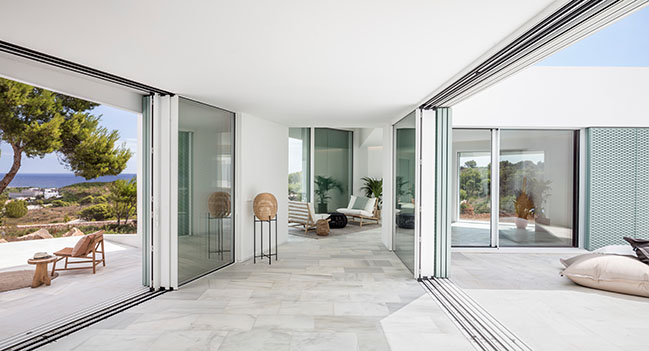 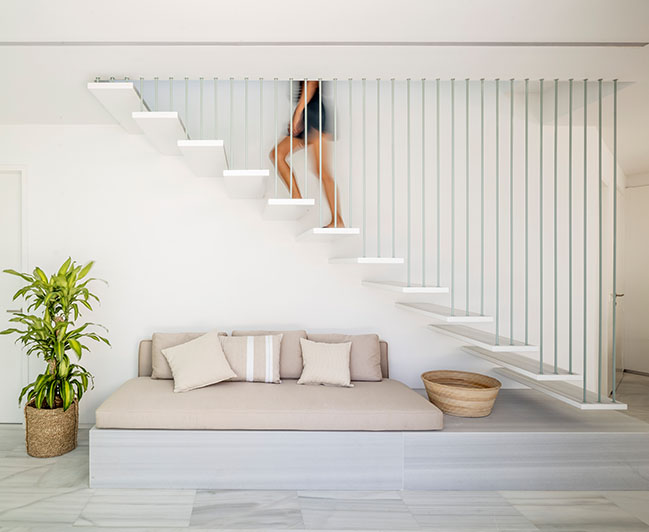 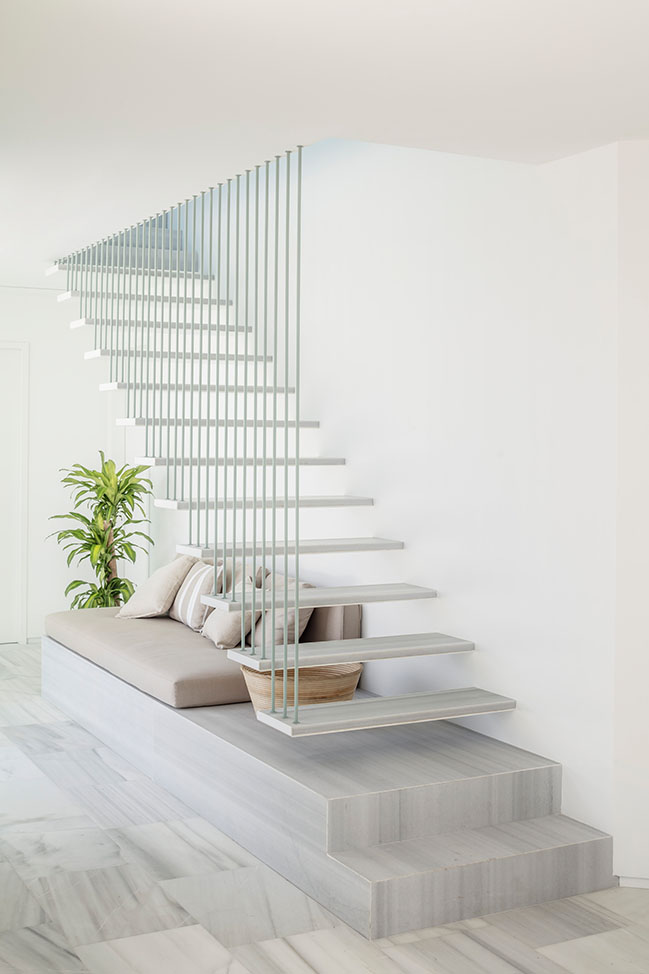 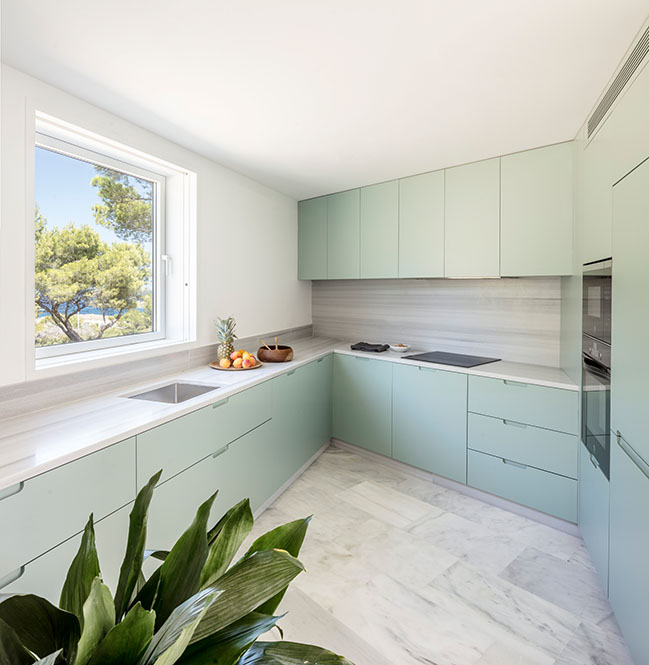 YOU MAY ALSO LIKE: Patio House by Arhitektura d.o.o. 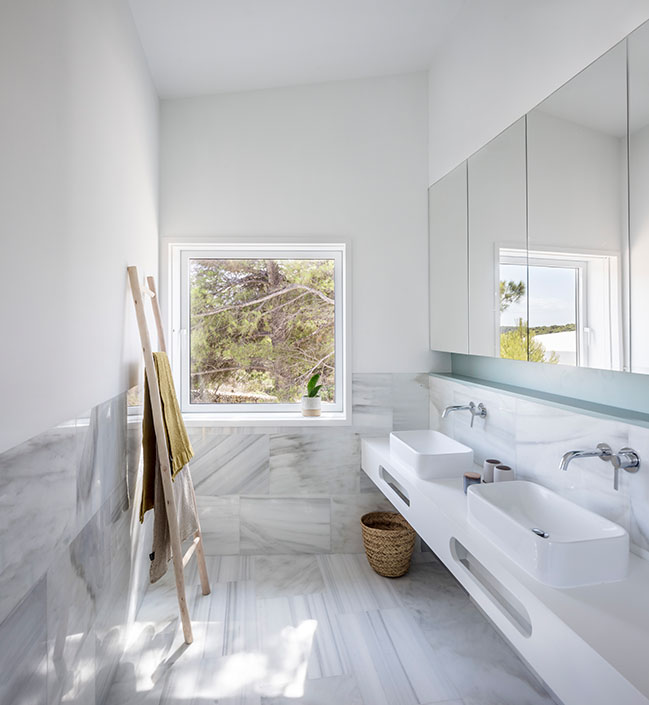 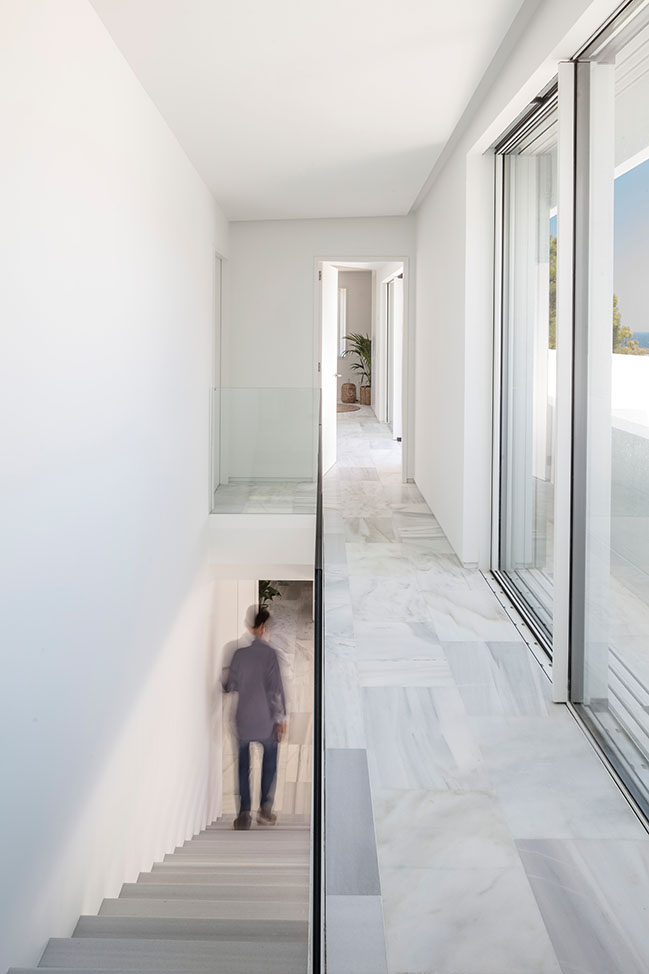 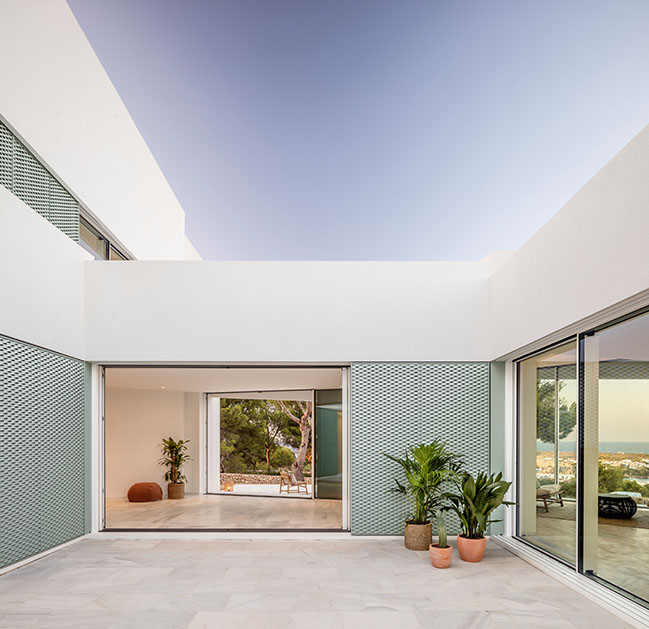 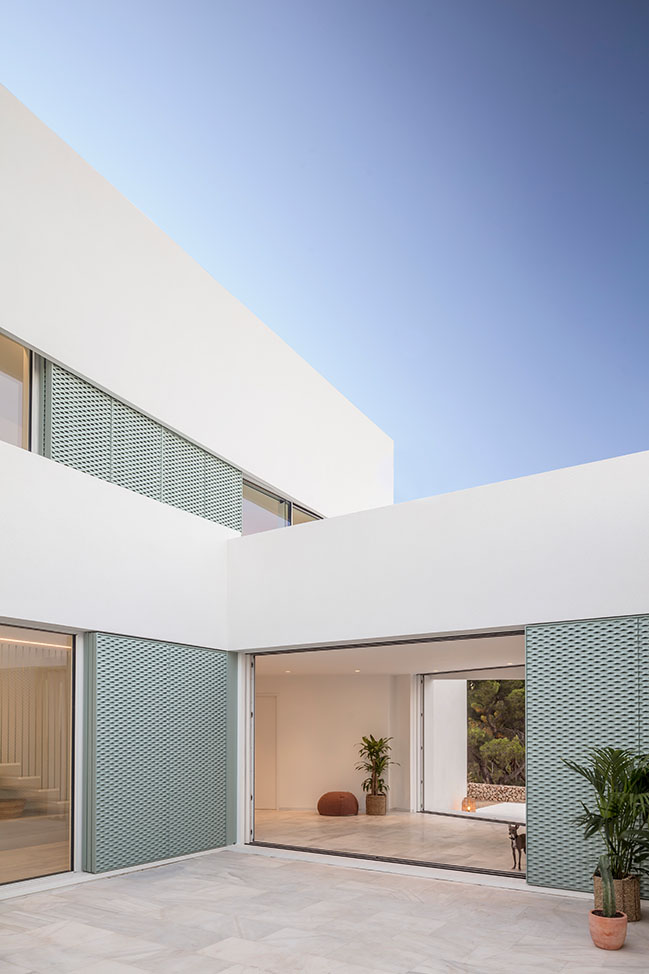 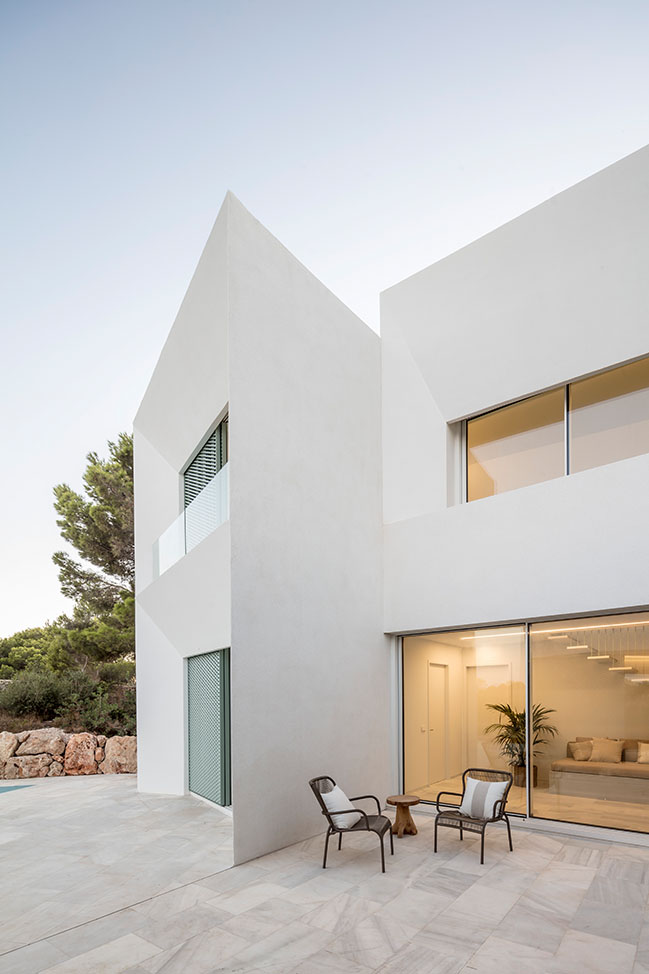 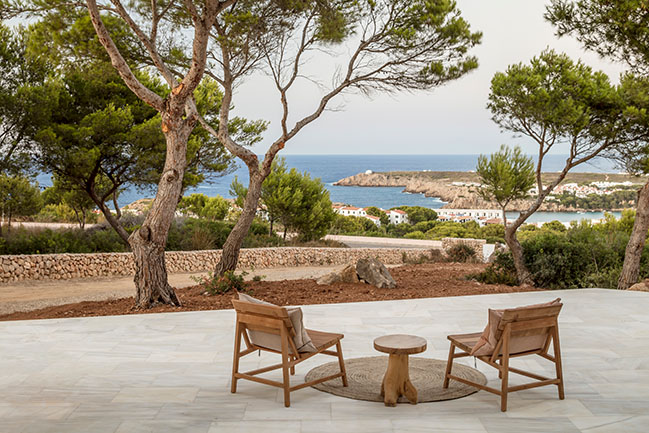 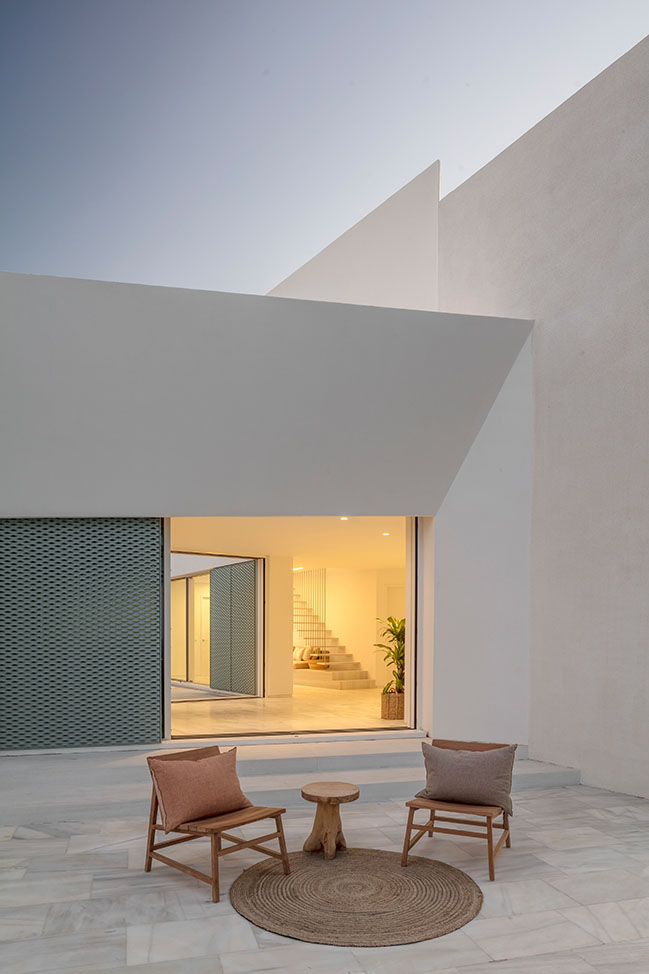 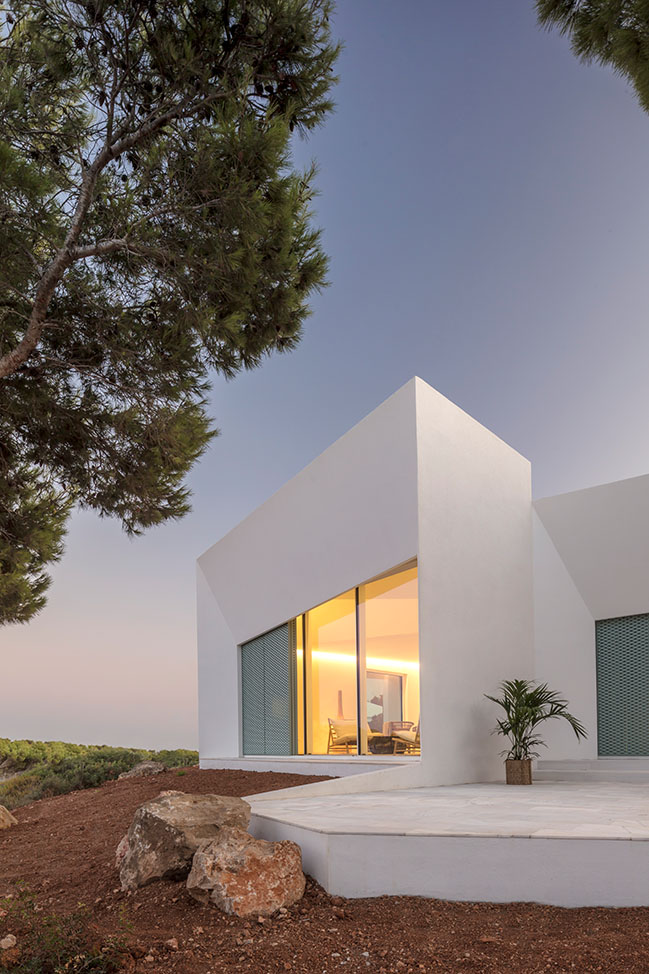 YOU MAY ALSO LIKE: Patio House by BLOOT Architecture 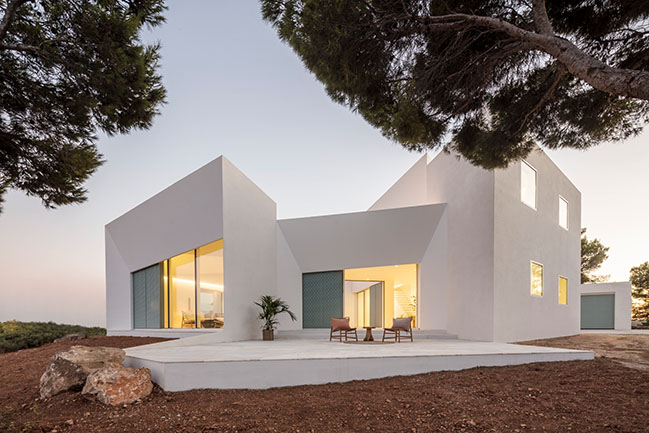 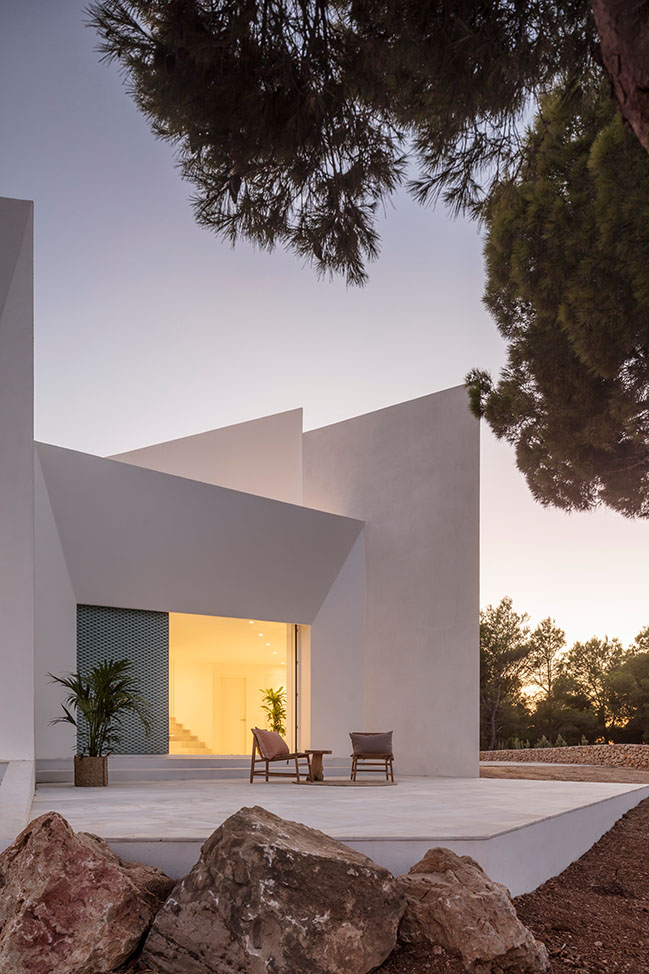 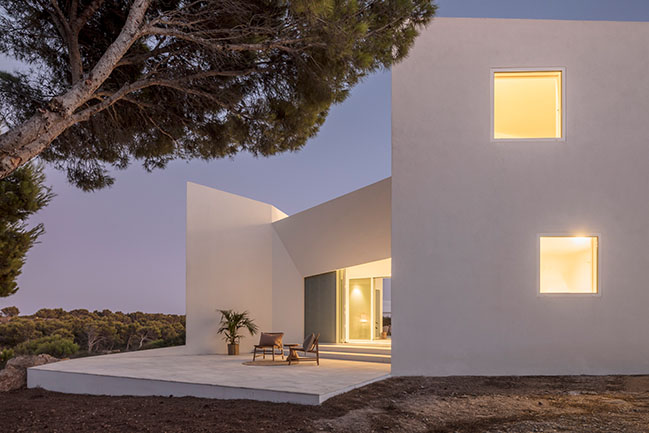 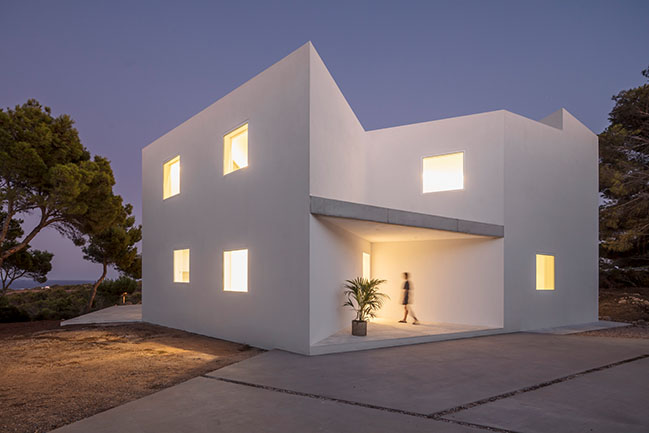 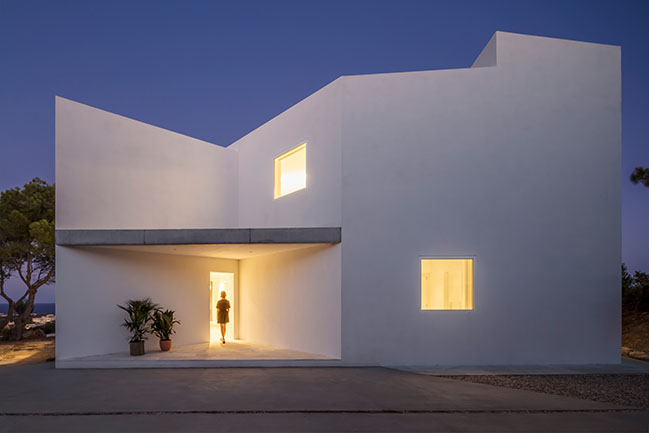 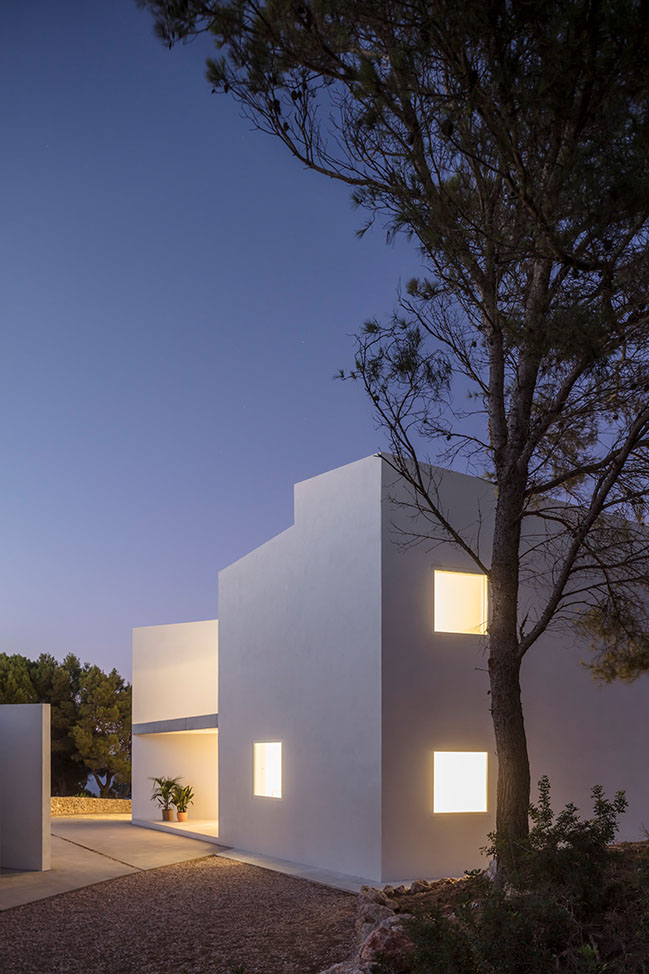 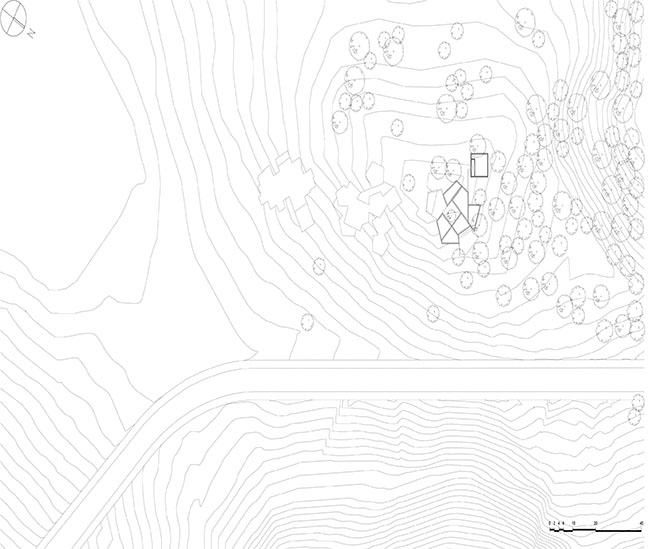 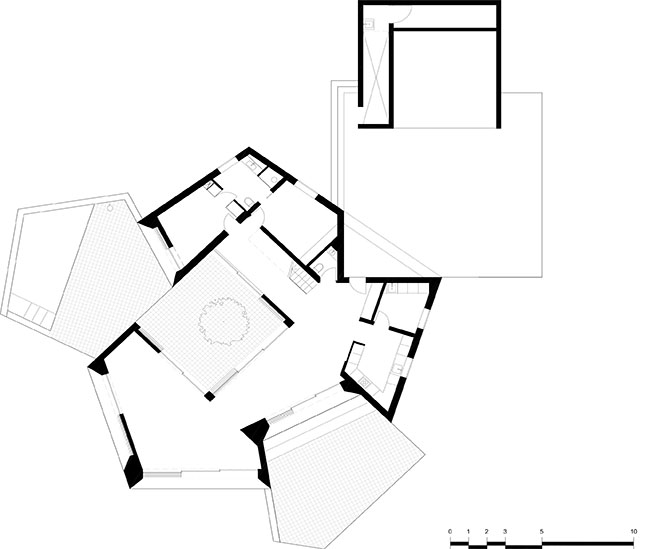 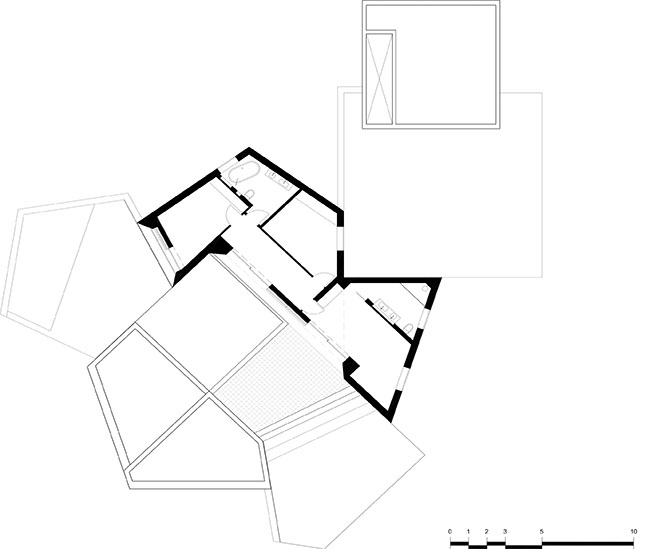 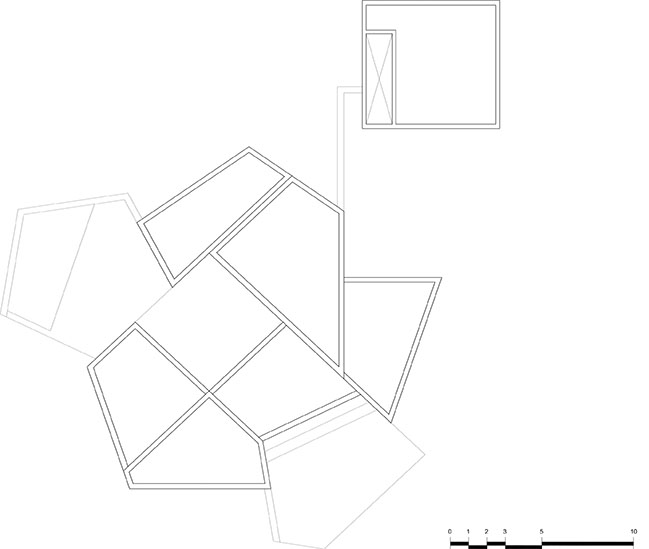 11 / 04 / 2020 Patio house sits on a gently sloping site located in Coves Noves, a small urbanisation on the north-east coast of Minorca's island, Spain...