The house in La Cañada is placed on a residential area very close to Valencia. Its plot is surrounded by existing vegetation and opened to its immediate surroundings. 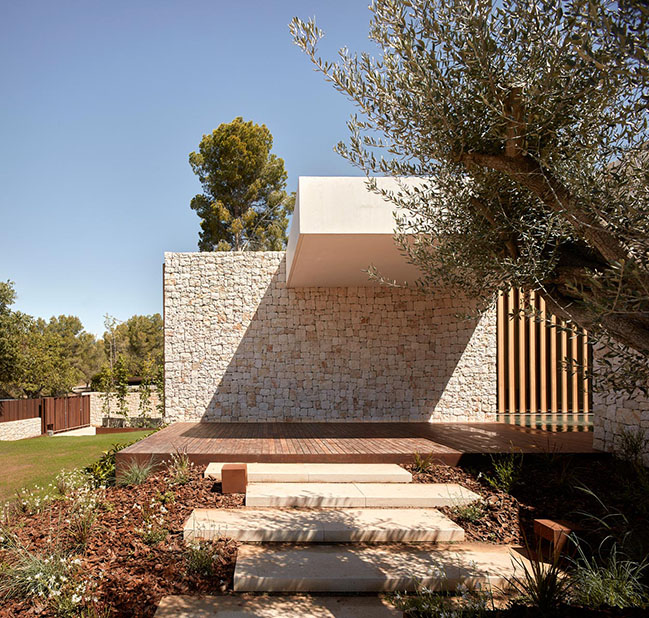 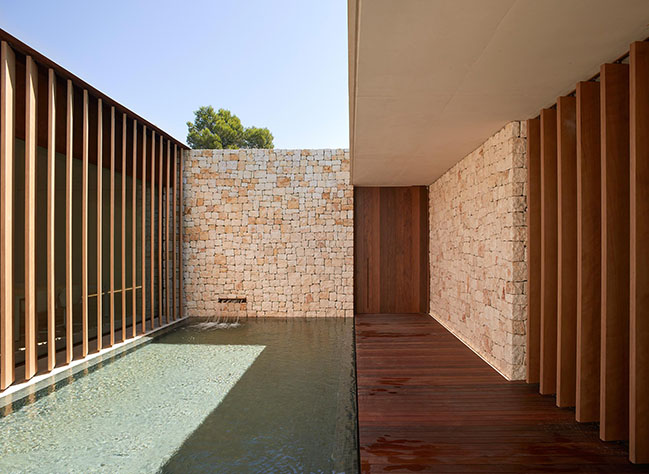 From the architect: A large number of pine trees and palm trees forms the background of the house. The origin of the project is the need of self-enclosed house, protected from the exterior but also fluid and opened to the depth of the garden. 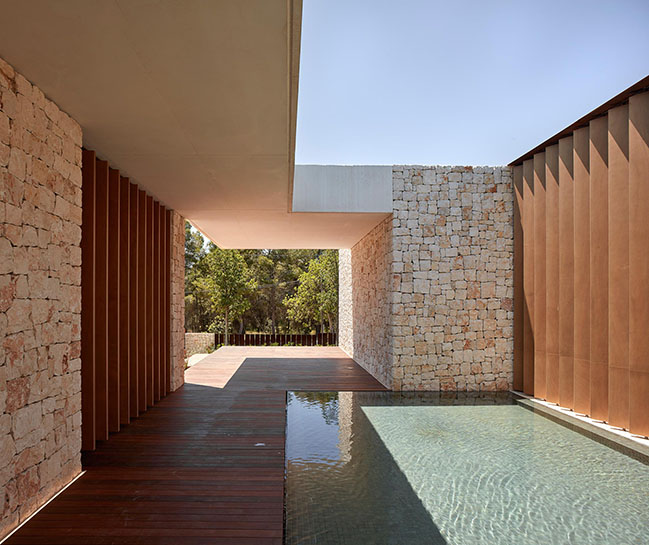 The square-plan layout is pierced by several perforations with different aims. The first of them hollows out the heart of the house and opens its perimeter. Thus, it becomes a large central courtyard that gives access to the house like a Roman atrium. This courtyard fulfils three different uses: generating an access, organising the rooms and allowing their visual connection. A large sheet of water stands out in this space and makes it look wider by reflecting the internal façade of the house and the sky. Thus, entering the house becomes a changing, pleasant and harmonious promenade. 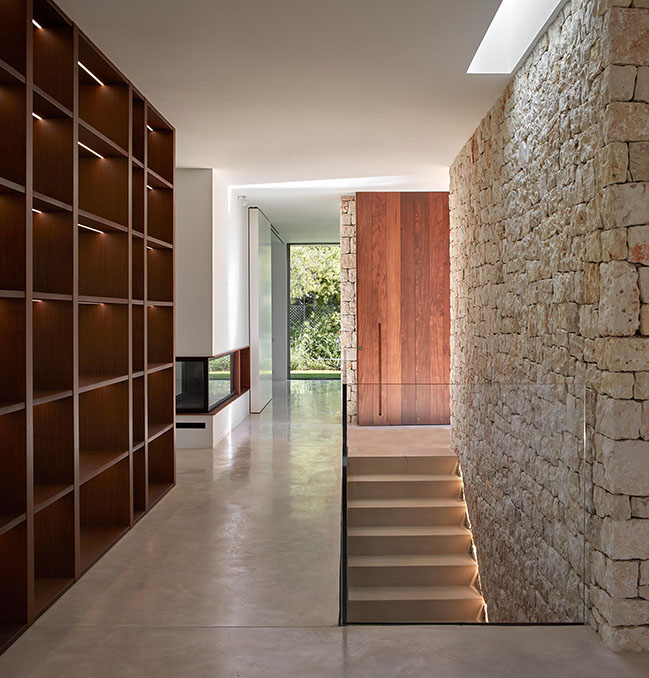 On the opposite side of the house, a large cantilever of white concrete frames the pool and the garden. This canopy has got two perforations to allow the entrance of sunlight. In the same veranda there are different living zones for summer or winter according to the sun exposure. 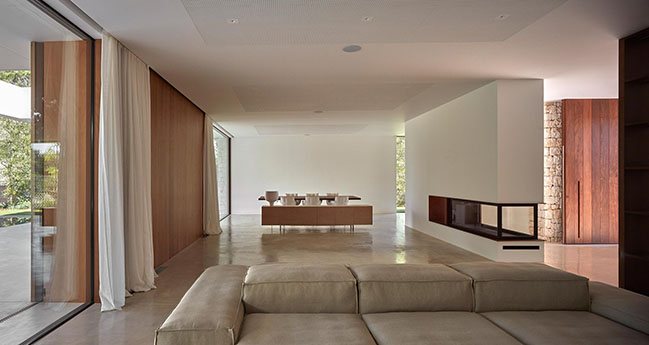 In order to highlight the horizontal character of the house, there is only a storey above the ground level. A great welcoming feeling is achieved because the house has got a really human scale. The service rooms are located on the basement storey, which gets light and ventilation through a sunken courtyard on the north façade. 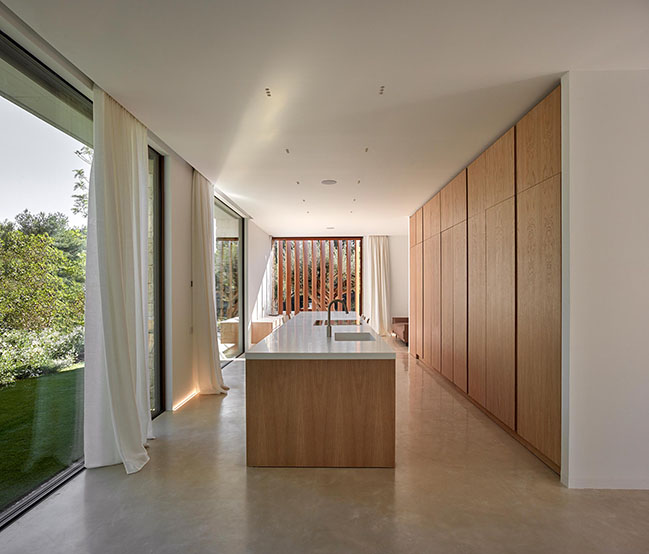 Being the access of the house at its centre, the day rooms and the night rooms are separated in a very natural way. The interior of the house has been designed to be fluid and continuous. The furniture, such as the pass-through fireplace and the low cabinets, allows the visual connections between adjacent rooms. The different wings of the house are also visually connected through the central courtyard. The sensation of fluidity is enhanced by the use of minimalistic window frames that are embedded into the walls. The sliding panes are completely hidden into the walls, thus opening the house outwards and blurring its limits. 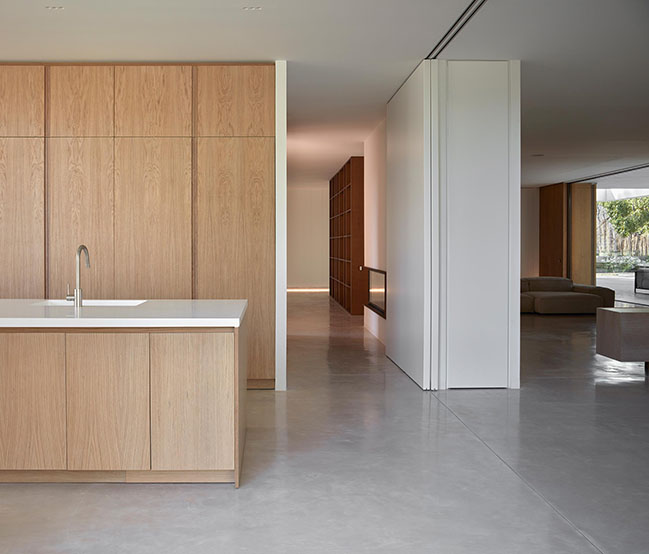 The enclosing walls are thick stonemasonry walls that protect the interior. The wide glass panes are protected by wooden slats that can be adjusted or slide into the walls. By this means, the sun exposure and the views from outside can be controlled. The canopy that frames the entrance and protects the veranda is made of white exposed concrete. This massive, texturized and sheltering skin encloses the internal spaces, where the white colour and the polished materials are the main features. The garden can be contemplated from a neutral canvas made of lacquered surfaces, smoked glasses and a pavement of trowelled concrete. 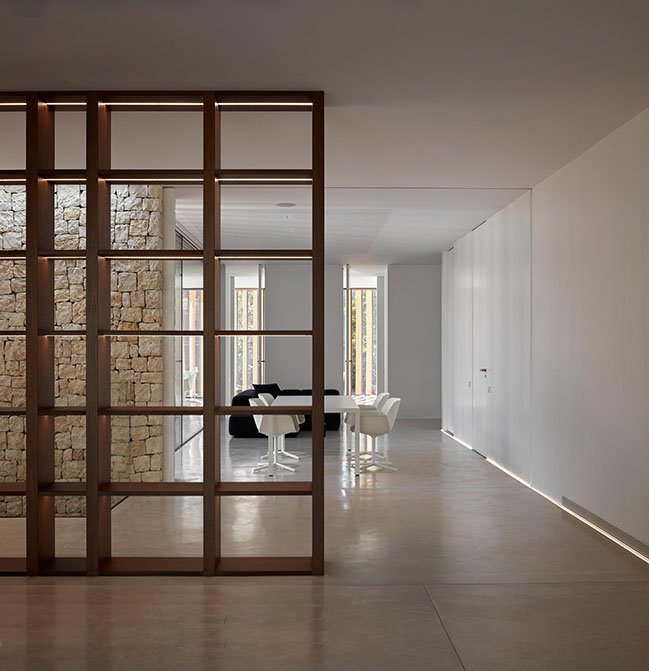 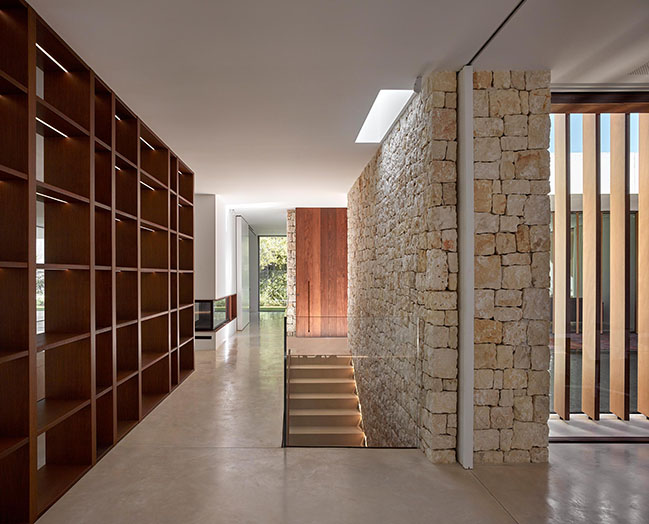 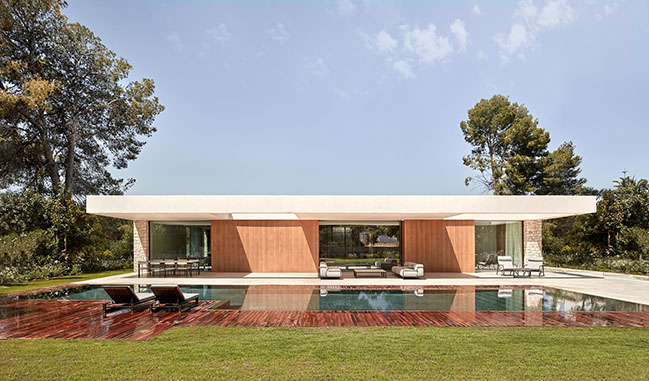 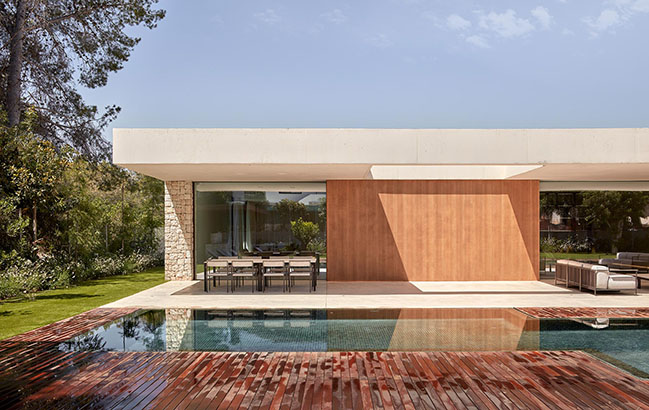 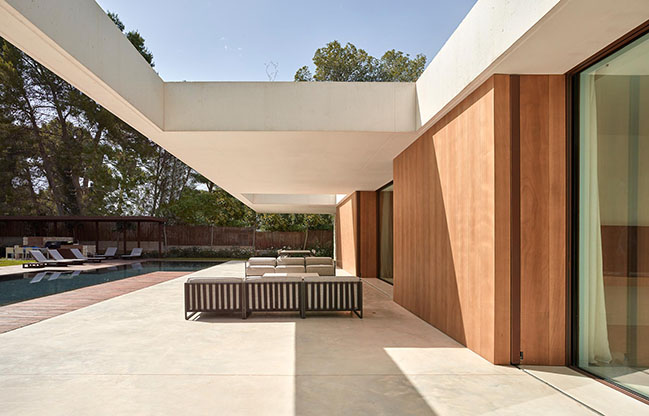 YOU MAY ALSO LIKE: House in Rubielos de Mora by Ramón Esteve Estudio 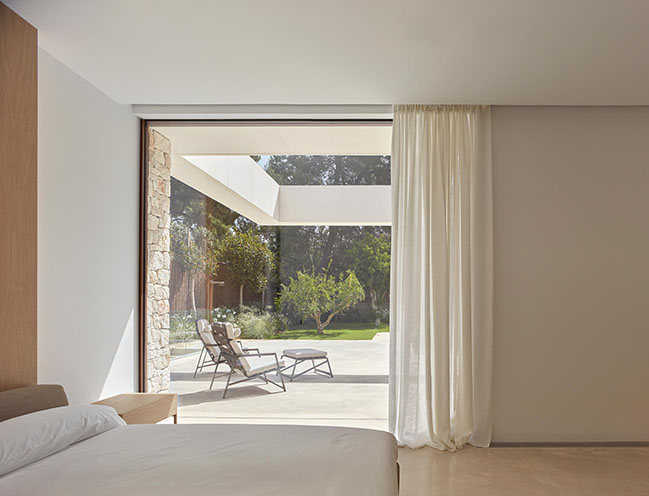 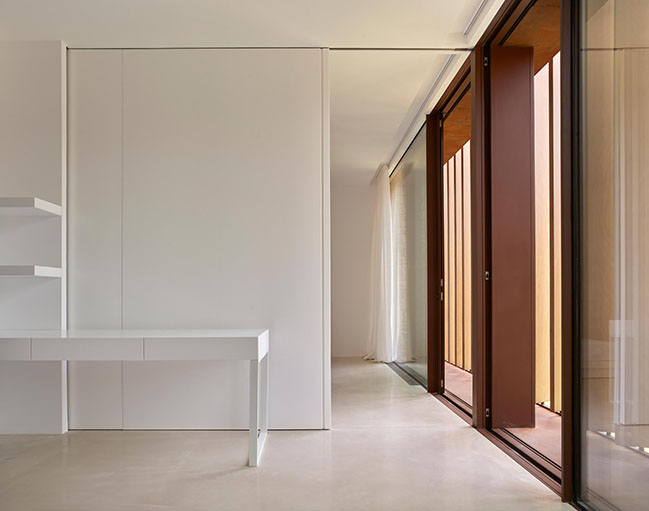 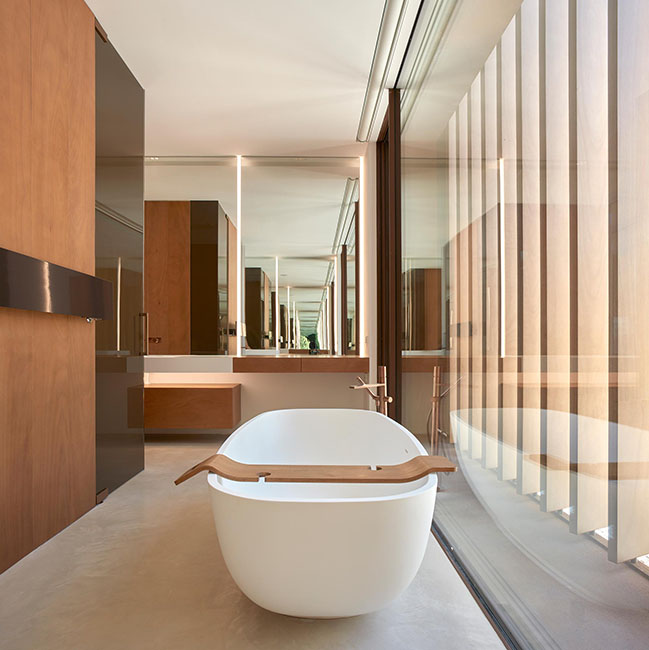 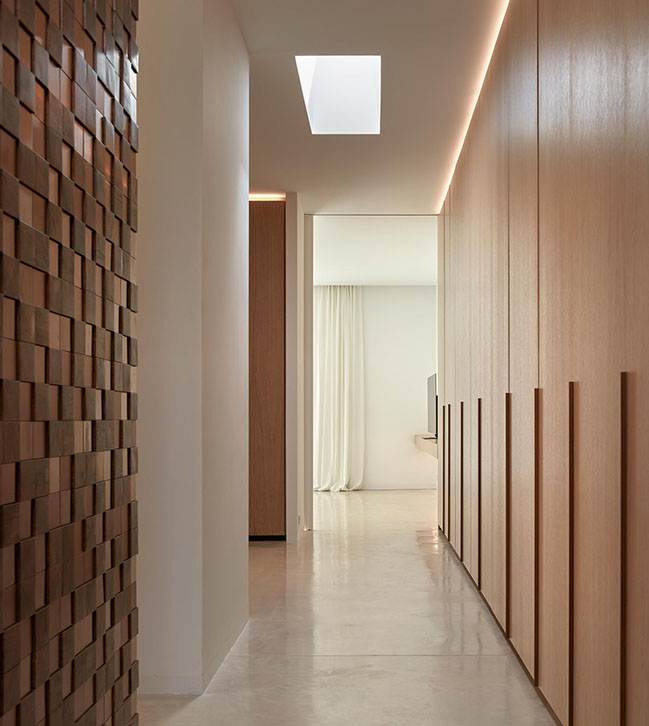 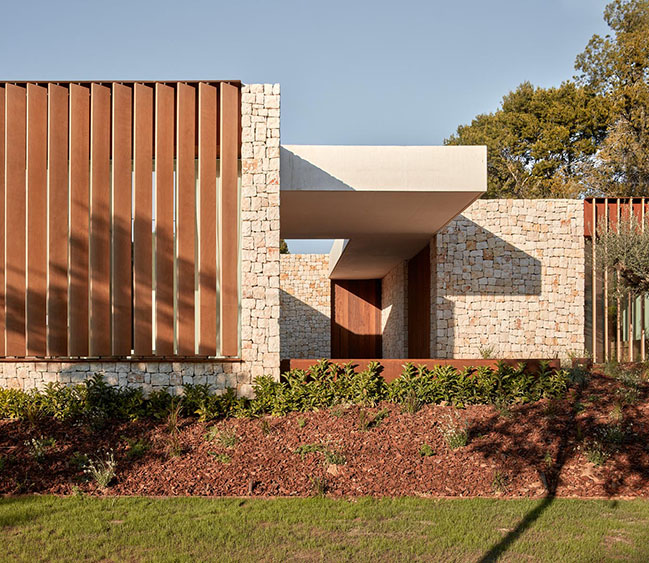 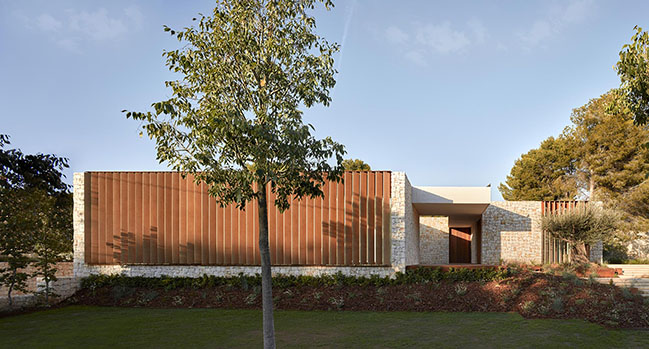 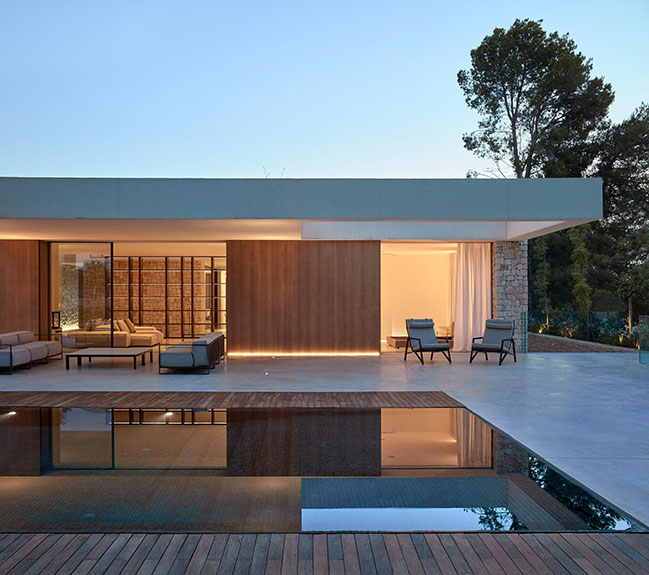 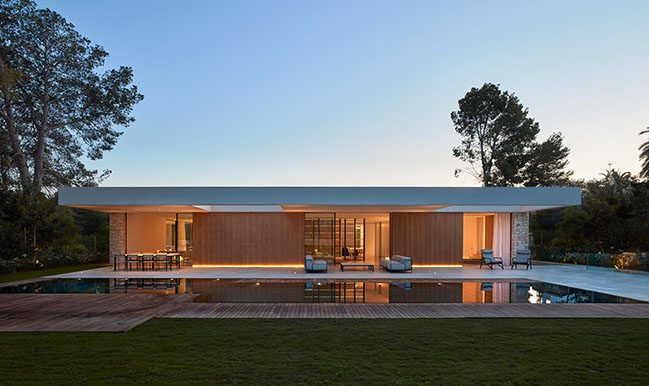 10 / 08 / 2019 The house in La Cañada is placed on a residential area very close to Valencia. Its plot is surrounded by existing vegetation and opened to its immediate surroundings...